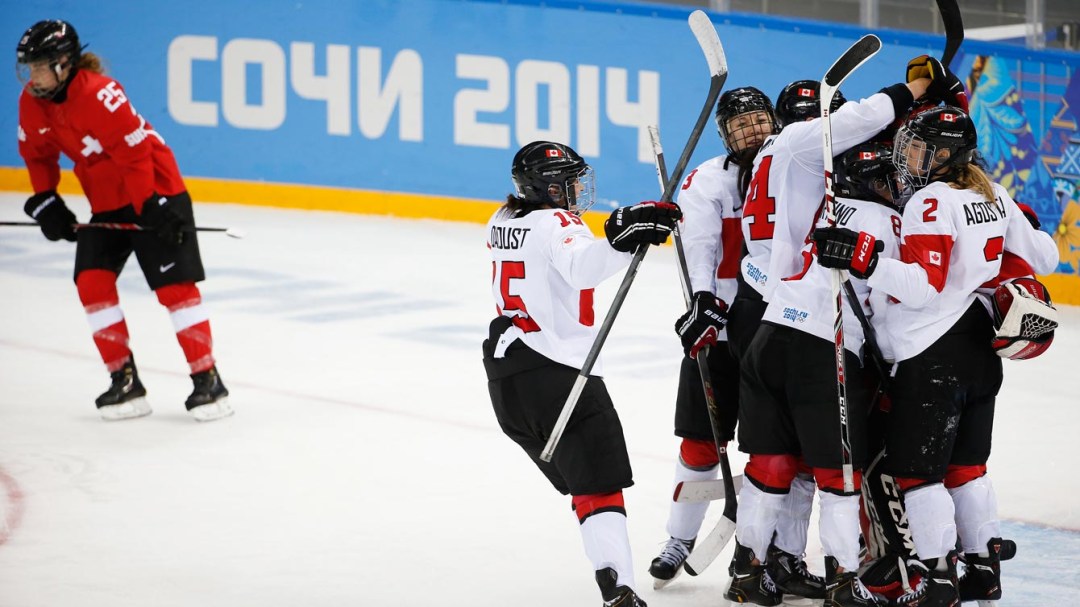 Team Canada pulled off a 3-1 victory over Switzerland in their semifinal Monday to lock up a spot in the Olympic gold medal match for a fifth straight time.

Their opponent for the final at Sochi 2014, the USA, is the only other country to have won a gold medal in women’s ice hockey since it was added to the Olympic schedule at Nagano 1998.

However, since winning in Japan the USA has watched rival Canada win three straight Olympic golds. The Canadian women will be looking to keep the streak alive when they play for gold at the Bolshoy Ice Dome at Noon ET on Wednesday.

Canada took down Switzerland somewhat easily, to book their place in the final. Olympic rookie Natalie Spooner led Canada’s effort over the Swiss with a pair of goals, while Mélodie Daoust scored the third and final goal. Shannon Szabados made 21 saves for the win, but her Swiss counterpart Florence Schelling was just spectacular in the loss, making 45 saves including on several breakaways and 2-on-1 rushes. The USA won their semifinal match handily, downing Sweden 6-1 to reach the final. When the two rivals meet on Thursday, Canada will be looking for a repeat of last week’s preliminary round game, when they defeated USA 3-2. While Canada has more positive Olympic experience to draw on, the US team seems to have had their number recently. The Americans are the reigning World Champions and have won 4 out of 7 games over Canada leading up to Sochi 2014.

However, the Canadian women have proven that they are the hardest team in the world to beat at the Olympics. Since losing the gold medal match in 1998, Canada’s women have taken home hockey’s top prize from the last three Olympic Winter Games. Over that period the Canadian women are unbeaten in Olympic hockey, putting together a 19-game winning streak, including the semifinal over Switzerland. While we are uncertain which of these two hockey superpowers will take home the top prize, we can say for sure that it will be an all-out battle that will be entertaining to watch.