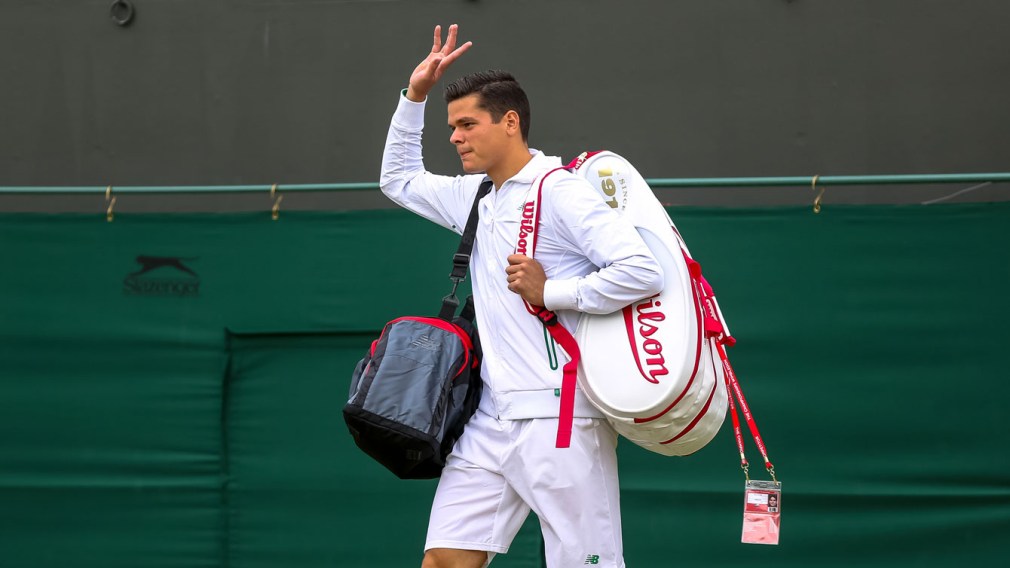 Raonic became the first Canadian men’s singles player to reach the semifinals of a Grand Slam since 1923 (since 1908 at Wimbledon).

It may have been the pressure of playing in the biggest match of his career, or it may have just been bad luck, but Raonic got off to a poor start, losing a challenge on his first serve before a double fault and handing the opening game to Federer on a break. The Swiss master made the most of the early advantage, holding serve throughout to take the opening set. Raonic left nothing to chance starting the second set with booming serves and winning the first game. When faced with potentially having his second service game slip away with another double fault, the Canadian kept his cool, delivered a timely ace and hustled his way out of trouble by winning a net point to take a 2-1 lead.

However, tied 4-4 Federer showed why he is considered by many the greatest tennis player of all time, delivering a couple of backhand winners and taking advantage of a Raonic error to break the Canadian for the second time en route to winning the set. The same situation resurfaced in the decisive final set, with Federer breaking Raonic again in the ninth game to successfully serve for the match. It will be Federer’s ninth Wimbledon final, he has won it seven times.

Raonic’s run was impressive and following a trip to the French Open quarterfinals, the back-to-back majors success is an eye-opener for many.

American legend Pete Sampras complimented Raonic saying “I think he’s a threat already. I think he’s got a huge game, monster serve, willing to come in and do some things and get to the net.”

Sampras stressed via The Canadian Press that “it takes time” to get to the upper echelon of the tennis world with the likes of Federer, Novak Djokovic and Andy Murray still ruling the roost. He sees Raonic heading in the right direction.

“I know Milos does the right things; he works hard; he wants to do well. He just has to be patient. It isn’t going to happen overnight.” Milos Raonic was a French Open quarterfinalist this year.

McEnroe insists Raonic has “done everything he possibly can in the past two years to come on stronger and better.”

Raonic didn’t drop a single set at Wimbledon until the fourth round to Kei Nishikori, before taking the match three sets to one. In the quarterfinals, facing giant-killer and crowd-favourite Nick Kyrgios, Raonic again bounced back from an opening set defeat and made the remainder of his passage to the semifinals look relatively comfortable.

Up against perhaps the greatest tennis player of all time, Raonic made a couple of key errors, but ultimately it was Federer’s strong play and insurmountable desire for a record eighth Wimbledon title that was too much to overcome.

Raonic’s great Wimbledon run ended by Federer
Ana Padurariu: Facing the never-ending challenges of 2020
What is the difference between racquetball and squash?
Shuttlecock and balls: The fastest moving objects in sport
Getting vertical: The highest jumps in sport
Team Canada Athletes Train at Home