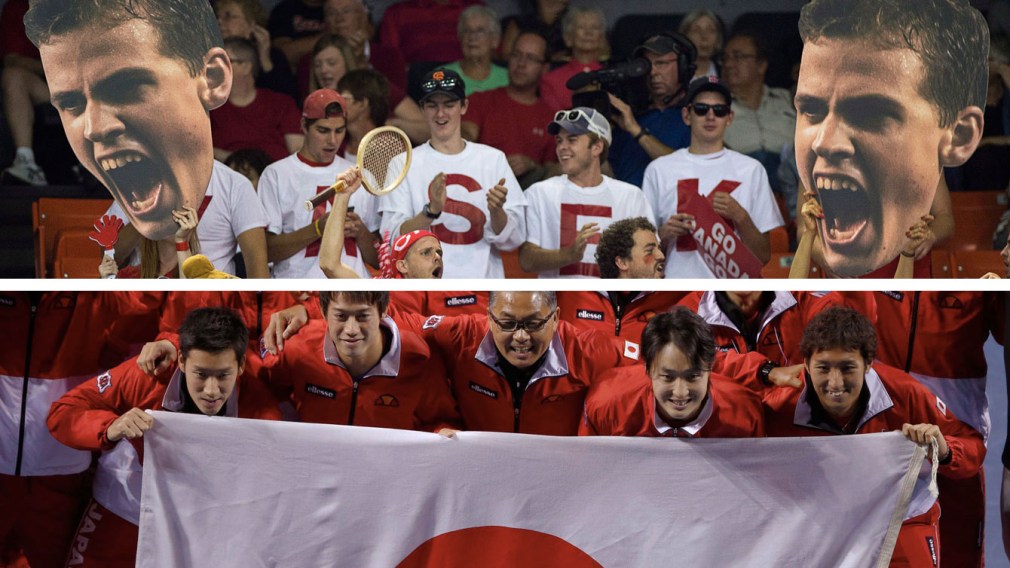 Canada will get a shot at redemption against Japan in the 2015 Davis Cup as the maple leaf nation has been drawn to face the land of the rising sun.

In February of 2014 Japan eliminated Canada in the opening round of this year’s Davis Cup tournament with a 4-1 victory in the best-of-five format used to decide a winner. That Canadian team however, was without its top two singles players in Milos Raonic and Vasek Pospisil due to injury.

On Thursday, Canada drew Japan once more in the 2015 Davis Cup first round. Japanese team poses with their flag following the defeat of Canada in the 2014 Davis Cup.

Japan has more history on its side, as the country has never lost to Canada in Davis Cup competition in the six meetings between the two nations. However, should Canadian players manage to remain healthy for their March 6-8 tie on Canadian soil (city yet to be confirmed), team captain Martin Laurendeau believes fans could back their country to a historic first win over the Japanese visitors.

“We’re excited to be able to play at home again behind a supportive crowd like what we’ve experienced in Halifax and Vancouver over the past couple of years,” Laurendeau said through a Tennis Canada press release. “While we know from recent experience that Japan is a talented team, we will be ready for the challenge and we know we have the capabilities to take on any team in the world.”

This month in Halifax Canada dispatched Colombia 3-2 to secure its place in the Davis Cup World Group – featuring the elite 16 teams in men’s team tennis – for the fourth straight year.

In 2013, Canada made it all the way to the semifinals of the Davis Cup before being ousted by Serbia. The feeling of momentum, a palpable rise in Canadian tennis, is still fresh for Laurendeau and he hopes his team can recapture it for 2015.

“We definitely feel we are a World Group nation and we look forward to starting fresh next year and trying to advance past the first round and create another historic run for our country.” Milos Raonic in Halifax after Canada retained its World Group spot for the 2015 Davis Cup.

Should Canada try to improve from 2013 and get all the way to the final, it certainly has to go through some of the best. Canada’s side of the Davis Cup bracket includes Switzerland, which has to overcome a tie against Belgium. Serbia is also nestled in there for a potential 2013 semifinal rematch.

To more pressing matters at hand, the key for Japan is the form of its top player Kei Nishikori. When fit, the Japanese star can give any player in the world a match, but his health is often in doubt. In any case, Laurendeau notes March is a long time away.

“There is a lot of tennis to be played before the team gathers for this tie, but we will be prepared and ready to compete.”

Canada-Japan headed for a rematch in Davis Cup opener
Eight must-visit cycling spots in Canada
What is the difference between racquetball and squash?
Shuttlecock and balls: The fastest moving objects in sport
Canada’s National Sports Organizations plan for safe return
Track and Road Cyclists Nominated to Team Canada for Tokyo 2020