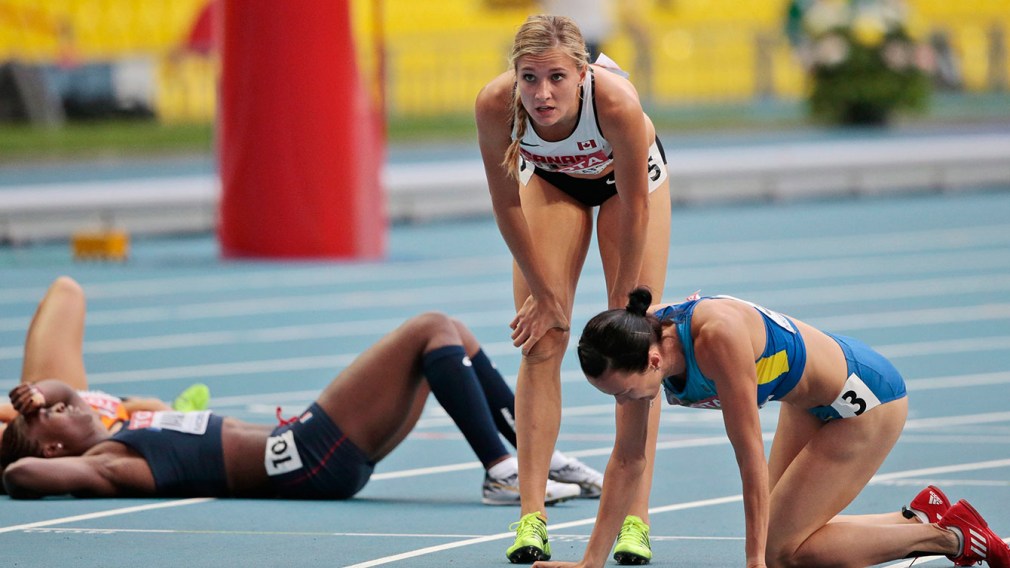 Breathe deep! The air is warmer, the snow is melting off roads, and now maybe, just maybe…you’re starting to think about going for a run.

We want you to get after that PB, 5km or marathon, it doesn’t matter. People trying to be better gets us fired up. Even if you run sort of weird.

But if you’re injured, you can’t be a regular training machine, tearing up city streets. So we asked Dr. Paddy McCluskey, Sport Medicine Lead for Athletics Canada’s Western Hub, for some help.

No beast mode, yet

The most common running injuries can result from amping up your training volume or intensity too quickly. Only Marshawn Lynch is Marshawn Lynch.

“Be careful in your progression of training load,” warns Dr. McCluskey, ‘“All of those phenomena (injuries) are common in people who are trying to make sudden increases in their training volume or their training intensity”

Dr. McCluskey says “The time allocated for training should include a proper warm-up.” You’ve been hearing this since 8th-grade gym class. It’s way more relevant now.

“At the world champs in 2009, I was there and Gary Reed was the 800m runner and it took him 90 minutes to warm-up for his race that took less than two minutes” – Dr. Paddy McCluskey on Gary Reed, current 800m Canadian record holder

Here are the most common running injuries:

If you are worried you may have any of these injuries, find a sports medicine doctor like Dr. McCluskey or consult your family physician, ok?

Achilles tendonitis: pain in the back of the heel, or the tendon. Usually stiff in the morning or at the beginning of runs. Could develop into a lump on the achilles, painful to touch.

Dr. McCluskey: “Typically achilles tendon problems occur in people who are trying to run faster, they are changing their training to run more intensely.”

Patellofemoral (maltracking of the knee cap): pain in the front of the knee when there’s more knee flexion such as going uphill or upstairs, or squatting down. It can also hurt when running.

Dr. McCluskey: “When there is pain in the knee it causes the muscles that help stabilize how the kneecap tracks, those muscles shut off, the pain inhibits how effectively they can work. You get this worsening cycle of pain, function around the knee and then more pain.”

Plantar Fasciitis: pain on the inside portion of the heel, usually first thing in the morning

Dr. McCluskey: “The causes, like many running injuries, is often a sudden increase in training volume or intensity. Often it can be precipitated by another foot injury that changes the mechanics of the foot so as to place stress on the plantar fascia. Sometimes poor mechanics and low arch contributes too”

Dr. McCluskey also points out: Shin splints, stress on the bone on the inside of the tibia or pain in the anterior tibialis muscle in the front of the shin.

The road or a sidewalk is typically the hardest surface to run on, and the track puts stress on the outside leg (usually right), ”In general, most of the volume work we recommend people do neither on the track or the road but try and find softer surfaces,” says Dr. McCluskey.

But…watch out for sprains or overuse injuries for muscles used to stabilize on softer terrain.

“There is a point when it can get too soft a then you start to get concerned about the terrain actually being unstable” says Dr. McCluskey.

“When it comes to running shoes I think it’s best to get a shoe that has a reasonable amount of cushion that is a neutral platform and see how you do.” says Dr. McCluskey.

I’m not a big fan of the minimalist running shoes I know it might be a bit of a controversial position there’s not a lot of evidence out there that running in minimalist shoes lowers injury rates – Dr. Paddy McCluskey

“I recommend people go to a shoe store where they have staff who sell a lot of shoes can talk about what their needs are.”

Orthotics are not for everyone

Dr. McCluskey says orthotics can be effective, he even uses orthotics himself, but only recommends them for very specific circumstances. If you don’t have an injury, or any diagnosed biomechanical issues, orthotics can be unnecessary so be careful and ask your physician what they think.

Compression helps, may not ward off injury

There are plenty of compression devices, like socks or shorts, which aid recovery and increase proprioceptive (interaction between the nervous system and the muscle and the joints) performance.

Do these reduce the chance of injury? Dr. McCluskey says this may not be the case, but does say “I’m a fan of compression,” and this is one you can do on your own. Start with light compression and work from there.

If you do get injured, put together a good team

“With any running injury what you need is a treatment team that includes somebody who can confirm what the diagnosis is and someone who can apply skills to suggest what the treatment is and follow the treatment,” says Dr. McCluskey.

The running bug has caught up to Olympic medal-winning rower Dorota Urbaniak, who will take part in the Spring Run-Off 8k in Toronto’s High Park on April 4, sponsored by the Canadian Olympic Foundation. Learn more about the Foundation.

Here are 7 tips to avoid injury and run faster this season
Shuttlecock and balls: The fastest moving objects in sport
Getting vertical: The highest jumps in sport
Weekend Roundup: Team Canada athletes glide to the podium worldwide
Korea 101: Korean Customs and Traditions
What are the differences between baseball and softball?