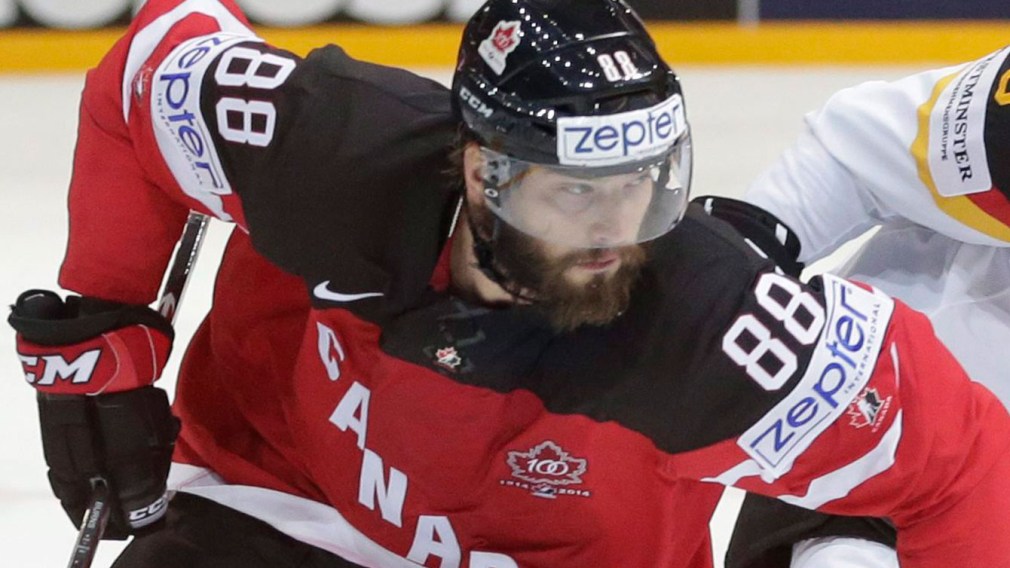 It wasn’t expected to be challenging, and Team Canada breezed past Belarus 9-0 to book a date with either Finland or the Czech Republic in a Saturday semifinal.

Brent Burns (with his solid beard game) got on the tournament snipe sheet by counting two goals past Berlarus’ Canadian-born goalie Kevin Lalande, including the game winner. Burns also added two assists. Ryan O’Reilly (2 G + 1 A) and Tyler Seguin (hat-trick) had three-points each.

Mike Smith stopped all 24 shots while his counterpart Kevin Lalande stopped 41 of 50. The story on Lalande starts with being a 5th-round (128th overall) draft pick of the Calgary Flames. Trips between the AHL and ECHL landed the Kingston-native playing for Dynamo Minsk of the KHL. According to the IIHF website, it was during his time in Europe he was invited to assume Belarusian citizenship.

RELATED: How Canada finished the preliminary round unbeaten

How it went down: Brent Burns’ first goal of the tournament and game was 27-seconds into the first, then Tyler Ennis scored before a Ryan O’Reilly tip-in made it 3-0 Canada just past halfway. Tyler Seguin made it 4-0 with a power play blast before the horn. Canada had 20 shots in the opening frame and Seguin would pick up where he left it, scoring at 3:23 of the middle period. Burns notched his second of the game with a signature slapper, while Belarus was down a man for having too many.

There were three more goals in the third as the Canadians surpassed their seven goal-per-game average thanks to a Seguin hat-trick marker, O’Reilly’s second and Jason Spezza unassisted.

The other quarterfinals: The USA overcame a Roman Josi goal, to beat the Swiss 3-1. The Americans will play the winner of Sweden vs. Russia. Of note, Alex Ovechkin will travel to the Czech Republic to play for Russia, should they advance. The Finland vs. Czech Republic game begins after 2:15 pm ET.

Hockey Worlds: Canada sails past Belarus and on to a semifinal
Ana Padurariu: Facing the never-ending challenges of 2020
What is the difference between racquetball and squash?
Shuttlecock and balls: The fastest moving objects in sport
Team Canada Athletes Train at Home
Getting vertical: The highest jumps in sport