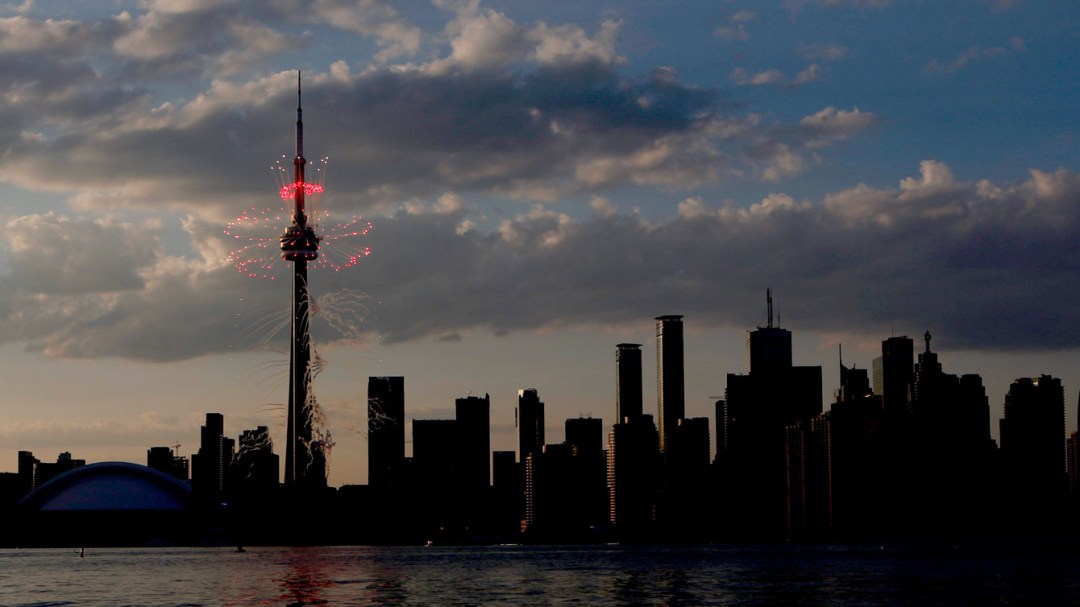 9 unforgettable images from a tremendous TO2015 Opening Ceremony

The Toronto 2015 Pan American Games Opening Ceremony proved to be one of the most entertaining events on Canadian soil in a long time.

While the athletes are always the main attraction, the night was full of many stars who helped shape the narrative of Canada’s Games as it enters the main competition phase.

Here are nine images that help tell the story of a magical evening for Canada: 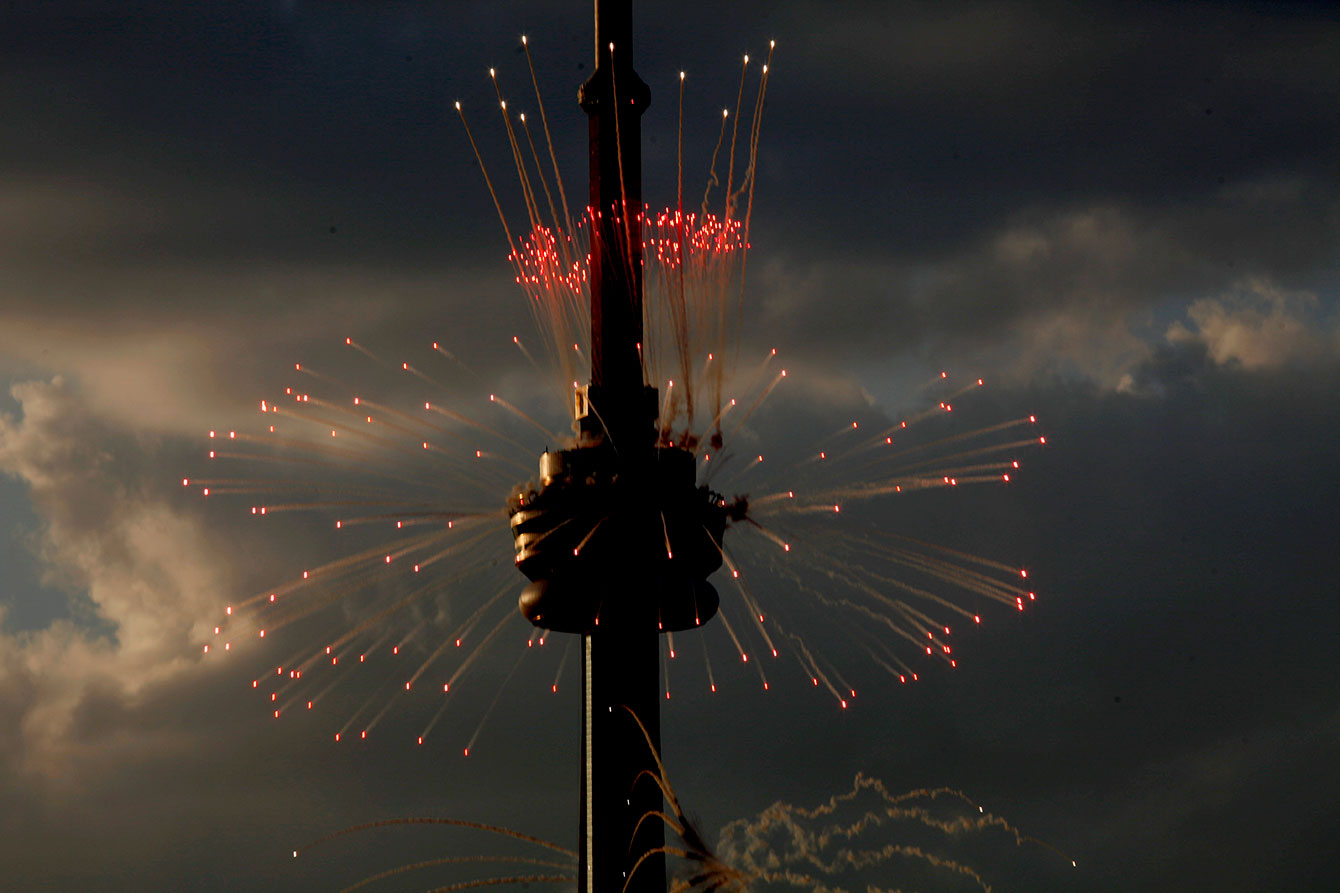 Toronto’s most recognized landmark, the CN Tower, lights up for the Opening Ceremony of the Pan American Games on July 10, 2015 (Photo: Michael P. Hall/COC).

The fantastic fireworks at the iconic Toronto symbol, CN Tower, set the mood for a truly spectacular evening ahead. The dramatic photo above of the sparkling tower was taken by Michael P. Hall for the Canadian Olympic Committee. 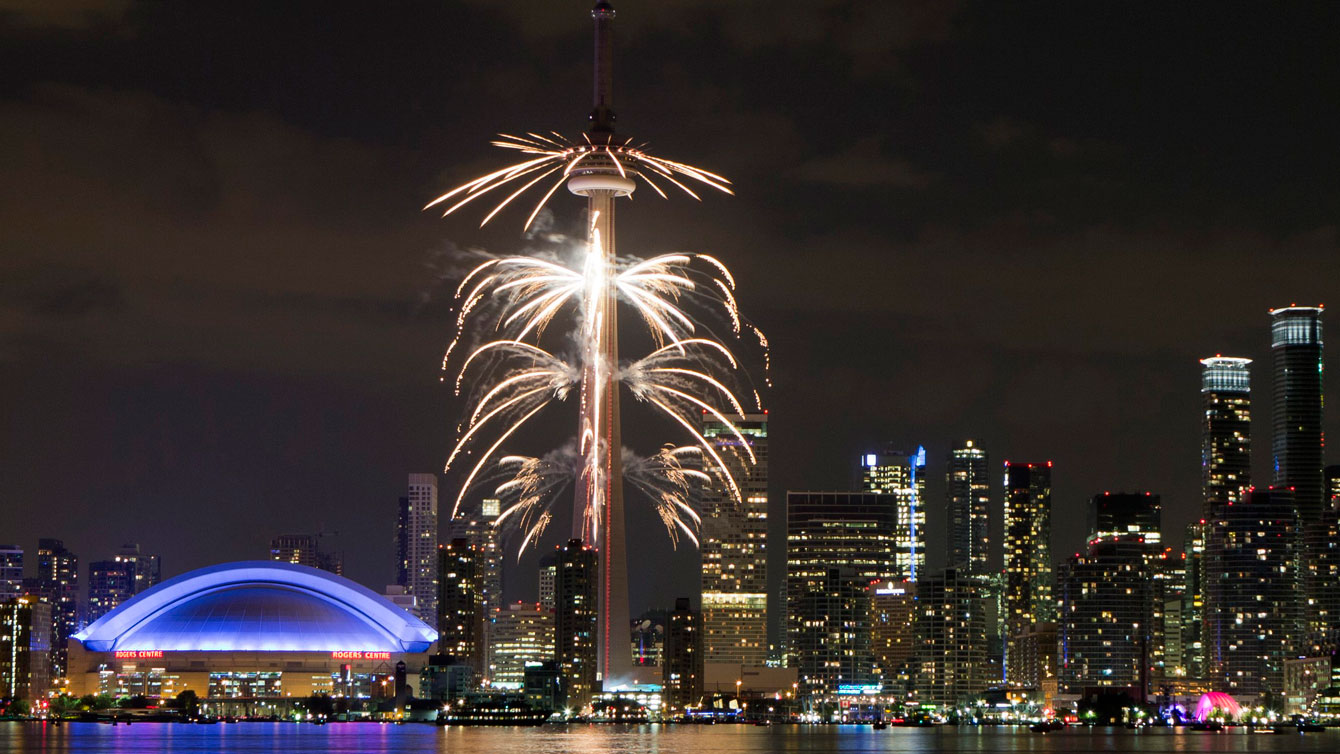 Toronto’s most recognized landmark, the CN Tower, lights up for the Opening Ceremony of the Pan American Games taking place in Rogers Centre (Pan Am Dome) on July 10, 2015.

With the theatrics outside the venue in full effect, soon the festivities moved inside the Pan Am Dome (Rogers Centre), where a meeting of legends – who provided Canada with one of its greatest international sport triumphs – took place. 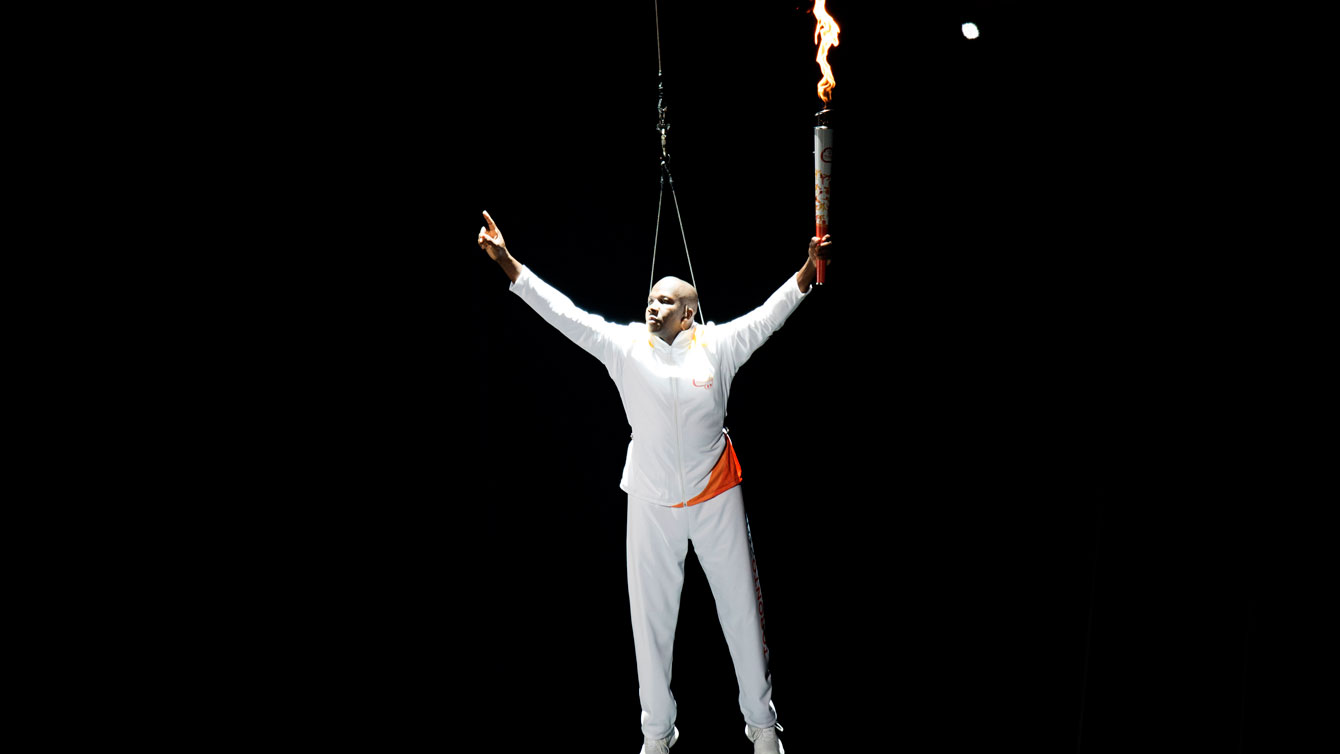 Donovan Bailey is lowered down to the Pan Am Opening Ceremony stage holding the Games’ torch on July 10, 2015.

A spectacular video showed Robert Esmie, Glenroy Gilbert, Bruny Surin and Donovan Bailey – members of the 4x100m gold medal-winning team at Atlanta 1996 – pass the flame to each other through Toronto’s streets and landmarks. Bailey was then lowered to the stage from an opening above after the video showed him base jumping from the EdgeWalk of the CN Tower (whether it was actually Bailey jumping, well… that doesn’t matter). One EdgeWalk item, Surin running the entire length of it, was in fact real and he is the first person to do it (356 metre above ground). Carlton Chambers, who ran the heats in the 4x100m Atlanta triumph, was also on stage.

More: Five brilliant photos on the eve of Opening Ceremony 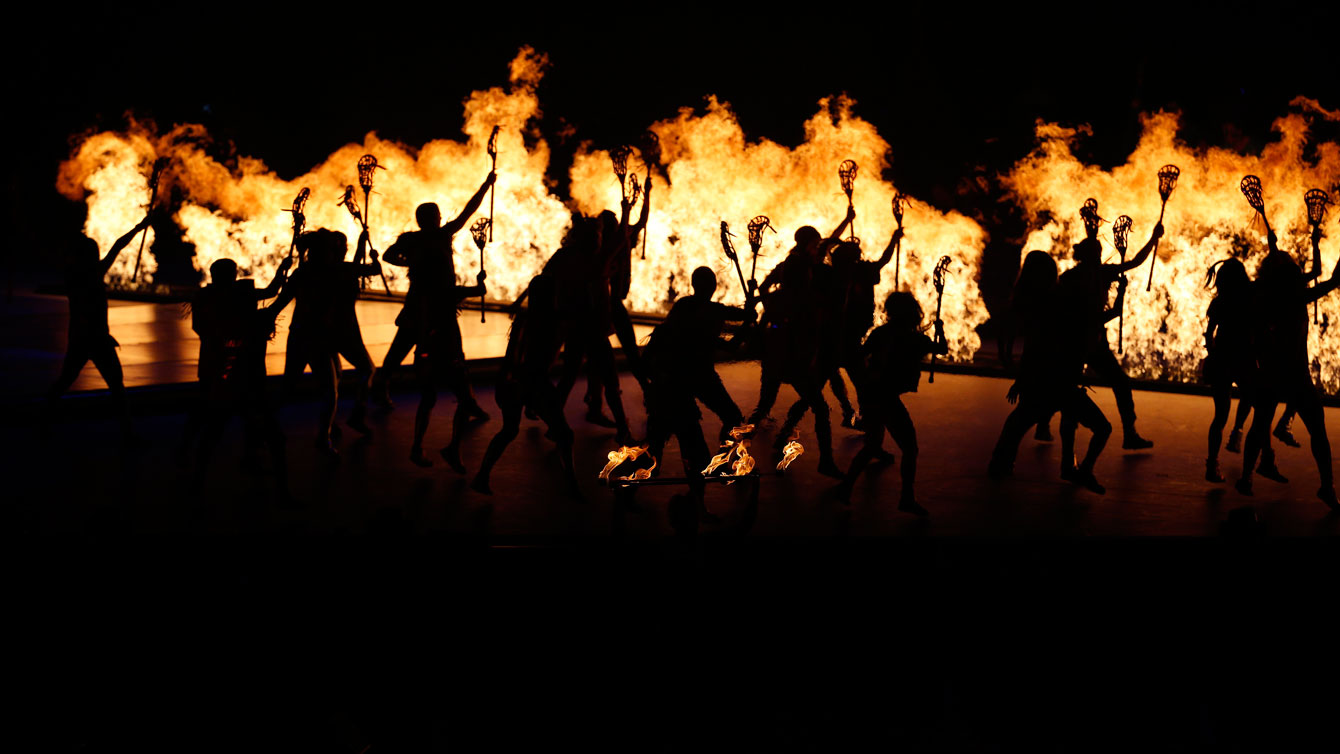 From beginning to end, members of Cirque du Soleil kept the crowd entertained with wold class acrobatic stunts and movements as the sport elements of the ceremony weaved in and out through their performance seamlessly. 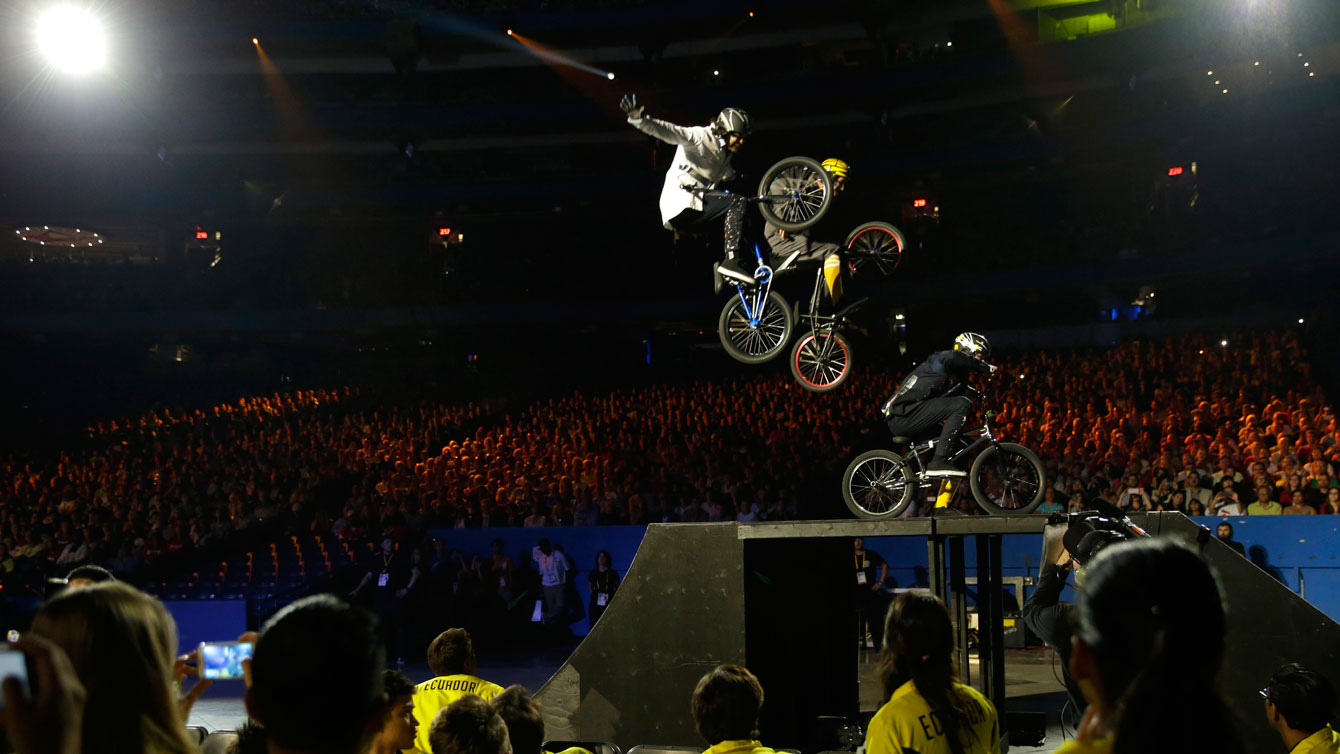 Stunt cyclists entertain onlookers at the Pan Am Games Opening Ceremony on July 10, 2015.

One of the major highlights of the night were tricks performed by BMX cyclists on ramps encircling the Pan Am athletes. Appropriately, on the eve of BMX finals on Day 1. 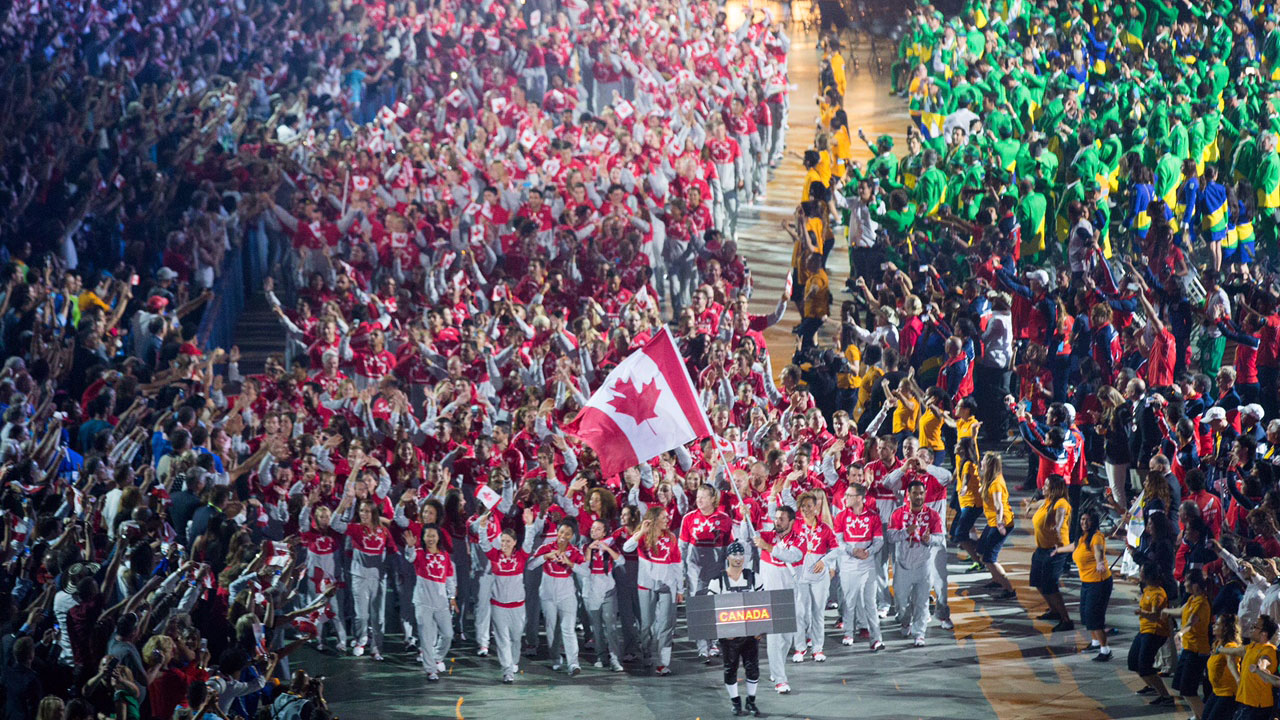 Canada enters the venue at the Parade of Nations during the Pan Am Games Opening Ceremony on July 10, 2015.

The Parade of Nations saw many warm, vibrant colours representing the Americas, while Canada – in dominant red and white – with the largest contingent representing 719 athletes, was last to march. One of the defining features of the Opening Ceremony were the volunteers (in yellow) creating a highly enthusiastic, human barricade of dancers along the parade route that instantly put the athletes in a festive mood. 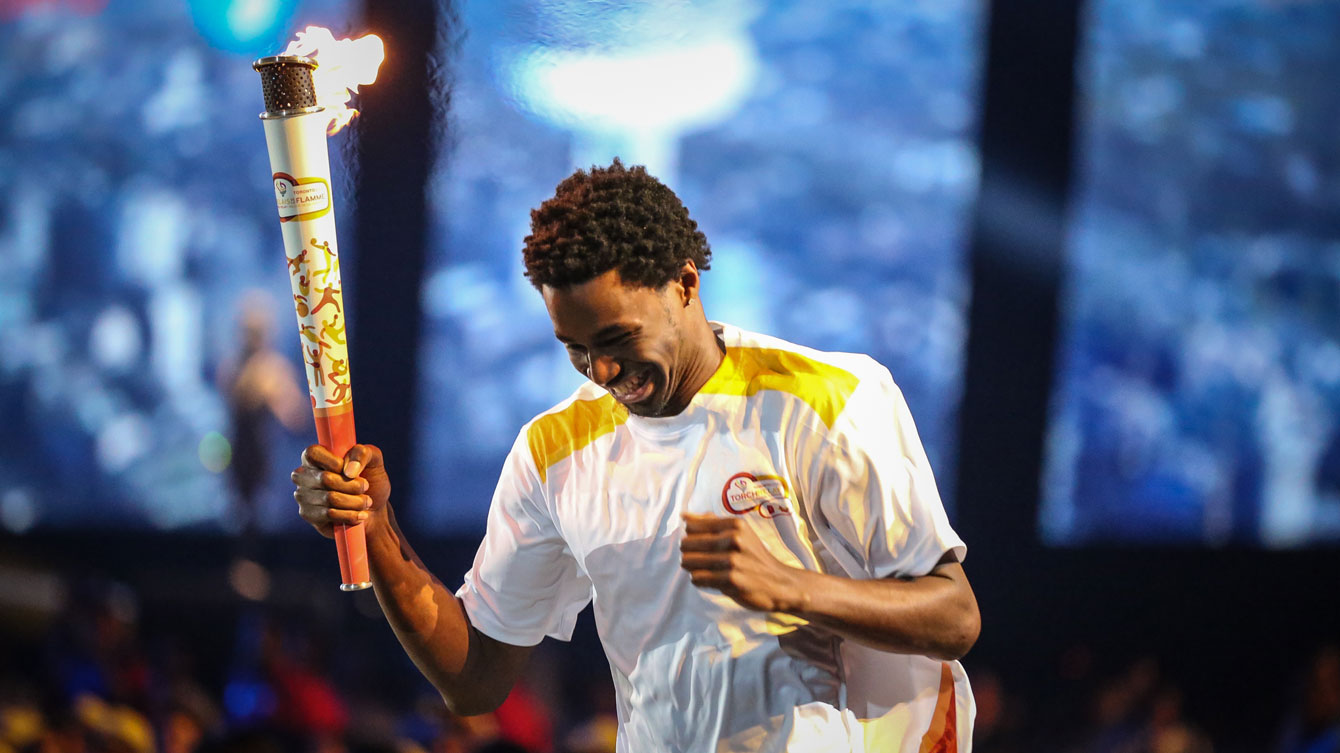 NBA star Andrew Wiggins with the Pan Am torch at the Opening Ceremony in Toronto on July 10, 2015 (Photo: Alexandra Fernando).

One very special moment of the Opening Ceremony saw Canadian Olympic medallist Marita Payne-Wiggins pass the Pan Am flame to her son, NBA Rookie of the Year Andrew Wiggins. The younger Wiggins then passed the flame to Canadian basketball legend Steve Nash. 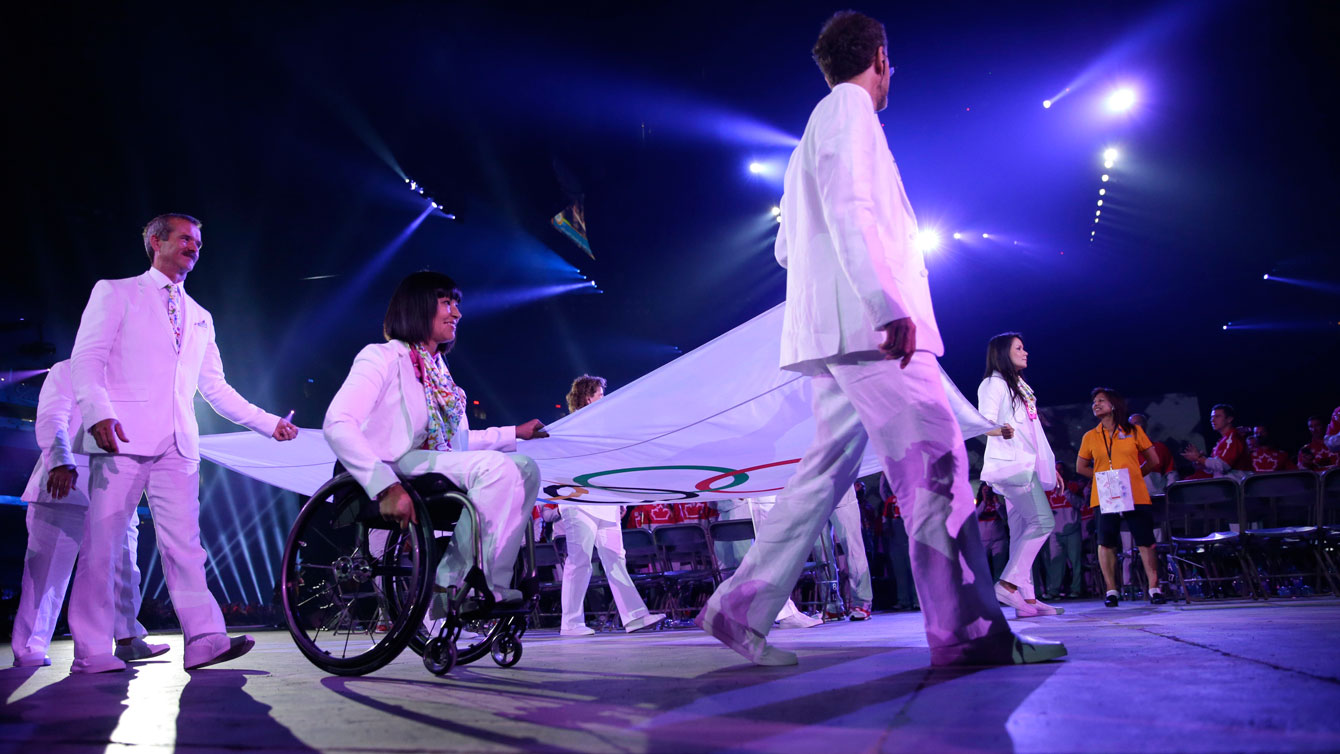 Olympic Flag carried at the Pan Am Opening Ceremony by prominent Canadians, including astronaut Commander Chris Hadfield on July 10, 2015.

Before the evening came to a close with more astonishing theatrics from Cirque, the formal presentation of the Pan Am and Olympic flags took place. The symbols were carried on to the stage by prominent Canadians including astronaut Commander Chris Hadfield, ice hockey hall of famers Mark Messier and Bobby Orr, Olympians Catrional Le May Doan, Marnie McBean and others luminaries. A few of them got together for this killer selfie (consider it a bonus 10th image):