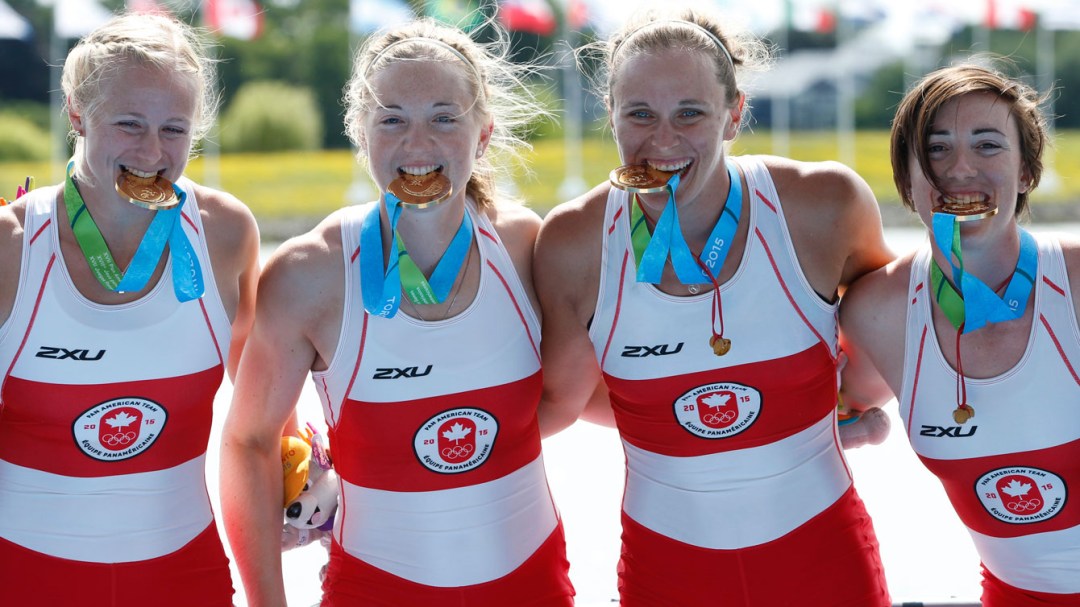 The men’s lightweight coxless four started the golden celebrations by pulling into the choppy waters on a cool, grey Wednesday morning before the sun ultimately appeared for the medal presentations. 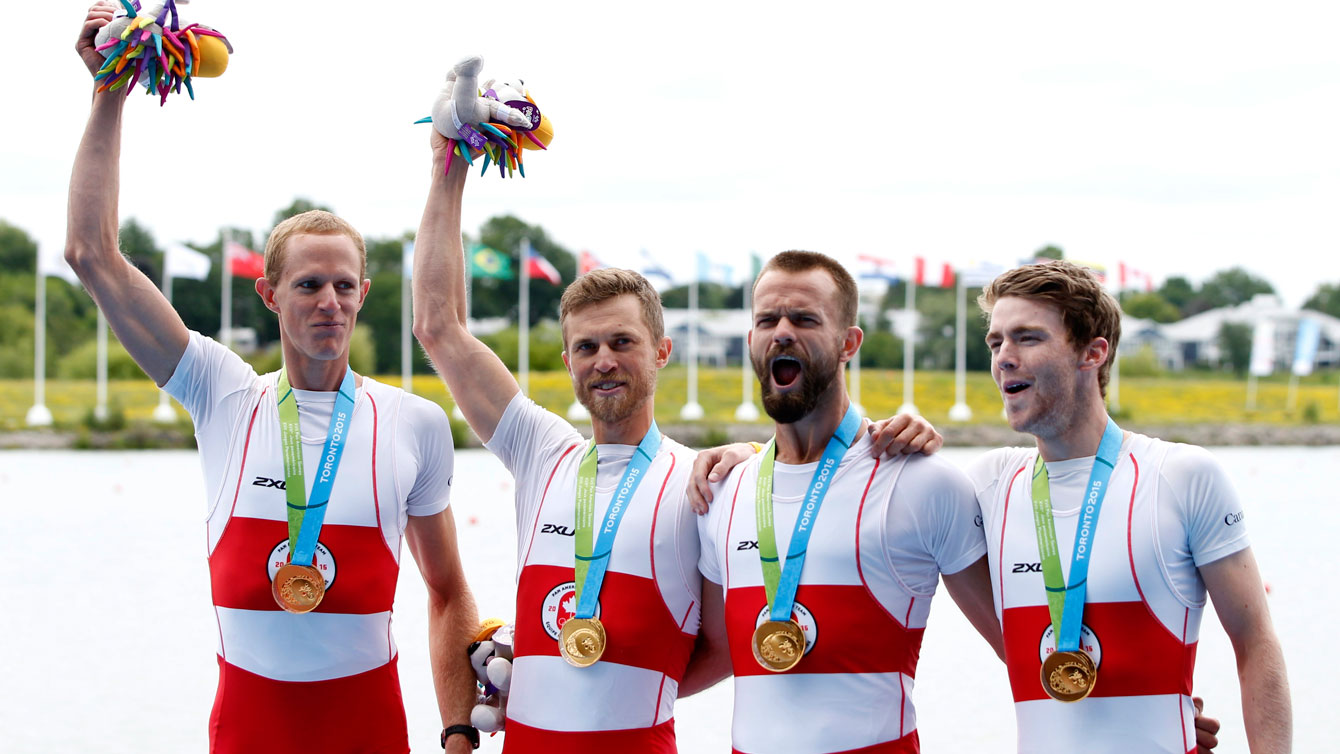 “Unbelievable, I don’t even know where to begin,” Woelf said. “The city of St. Catharines was amazing supporting us this entire week and even the entire GTA for all the Pan Am sports, is actually huge.” 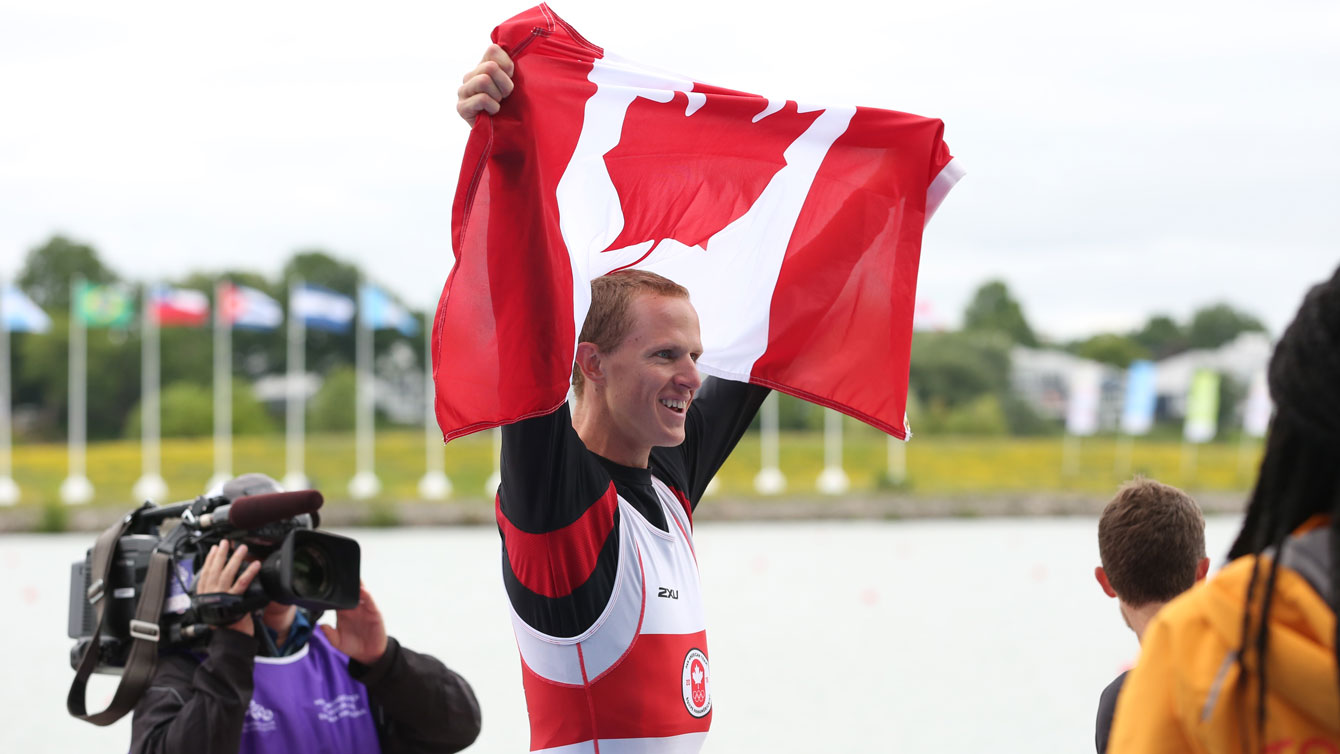 Eric Woelfl holds up the maple leaf after men’s lightweight coxless four gold in the Pan Am Games on July 15, 2015.

The rower relayed what most athletes have said about competing in front of home fans, something many Canadian athletes in Olympic and Pan Am Games rosters don’t get to enjoy as often as they’d like.

“This is an unforgettable experience. Even though I stand here as an individual it’s so important to recognize all the people that helped me get this far. Without all these people here and all these people watching at home I wouldn’t be where I am now.”

Prior to the lightweight four, Rob Gibson gave Canada a silver medal in the men’s single sculls behind Cuban Angel Fournier. It’s Gibson’s second medal of TO2015, complementing the men’s quadruple sculls gold from Tuesday. He waded into the water conditions. 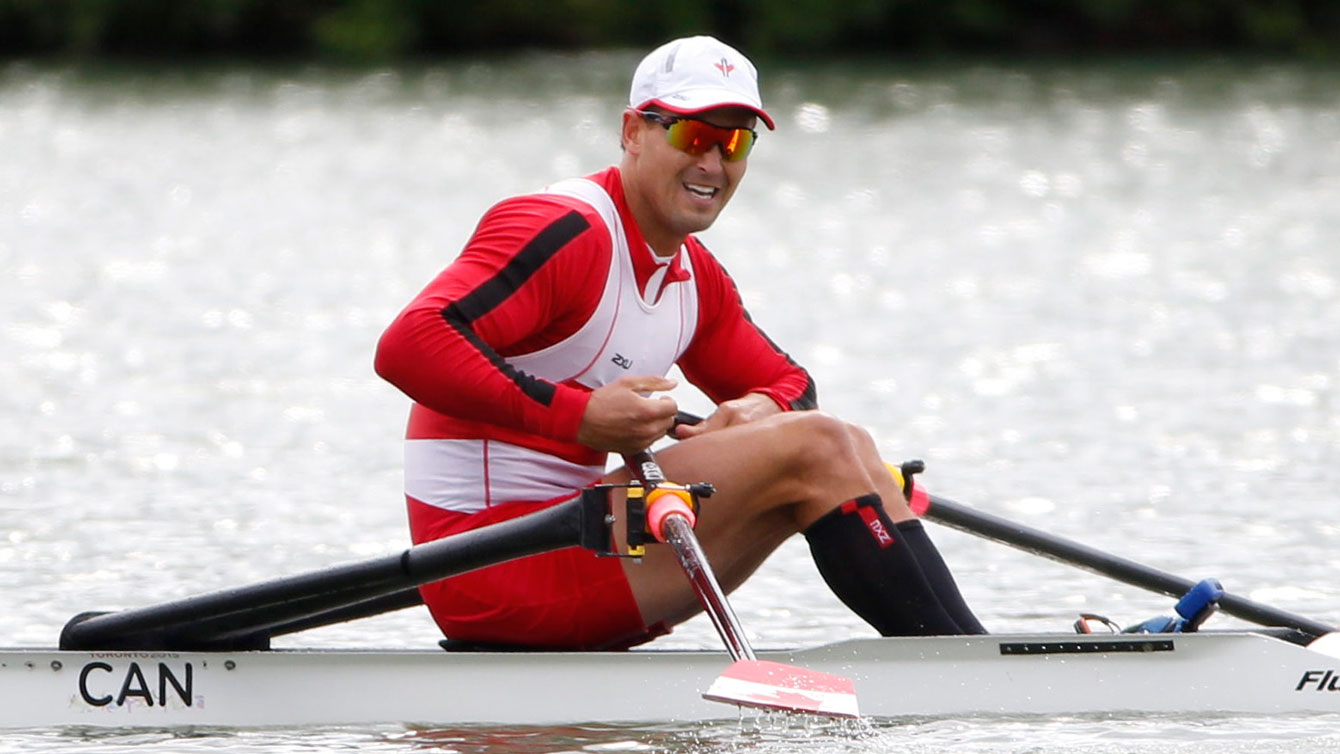 Rob Gibson after finishing the men’s singles sculls final at the Pan Am Games on July 15, 2015.

“I was thinking they were going to cancel the race the wind was so bad. There was a lot of water in my boat before the race even started.” As for trying to keep pace with Fournier, Gibson was pragmatic. “The Cuban just took down the first 500 (metres). He’s a really experienced rower, he is second best in the world and it showed today.”

Later in the morning the crowd roared again when the women’s quadruple sculls team of Kate Goodfellow, Kerry Shaffer, Carling Zeeman and Antje von Seydlitz mercilessly beat the field for Canada’s second gold and third medal of the day.

“You just anticipate it coming into the last 500 meters,” Zeeman said of the fans as they get to their feet when rowers become visible. “They didn’t let us down today. It was absolutely unbelievable.” 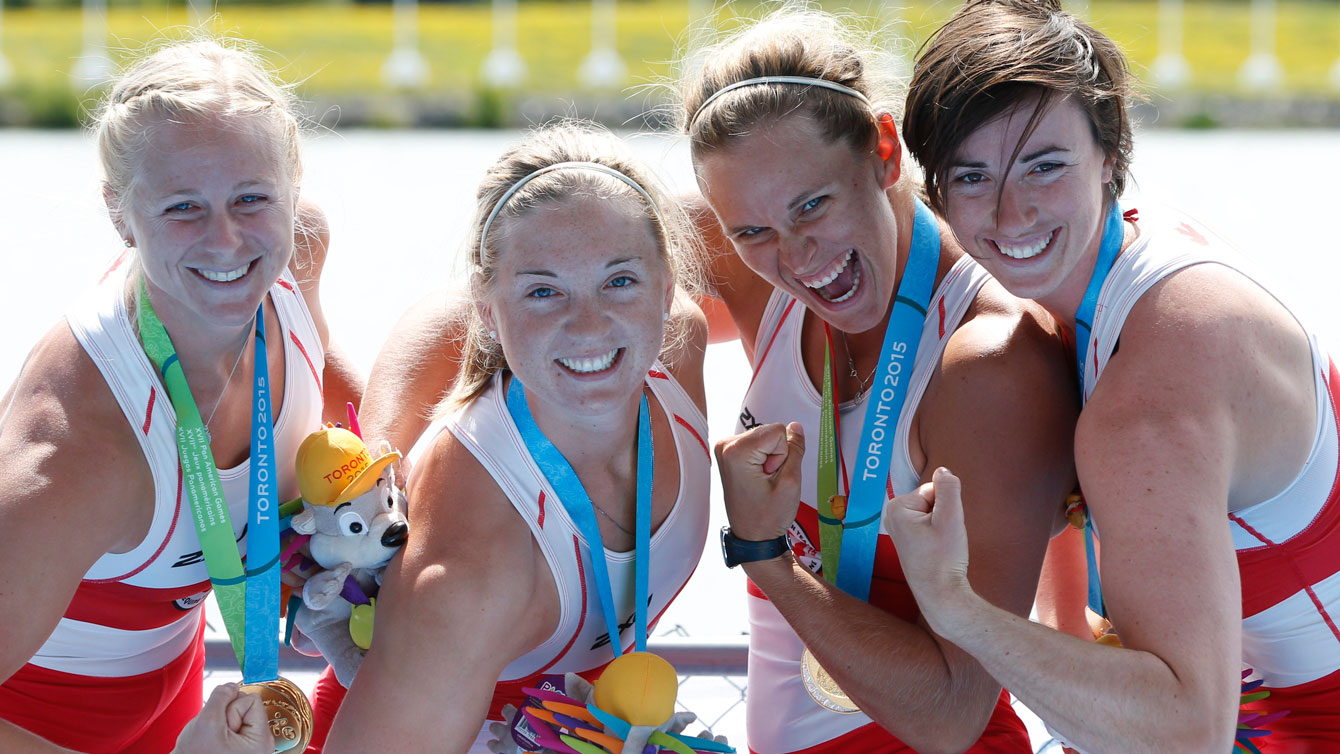 “We’re all pretty excited. It’s been a long week. Just to finish on such a good note is a good feeling. So exhilarating.”

“It was amazing,” double TO2015 gold medallist McCabe said of the race. “There’s a strong headwind at the start. We were a little nervous especially with the pressure of the crowd.”

But they weren’t about to let the Canadian fans down. 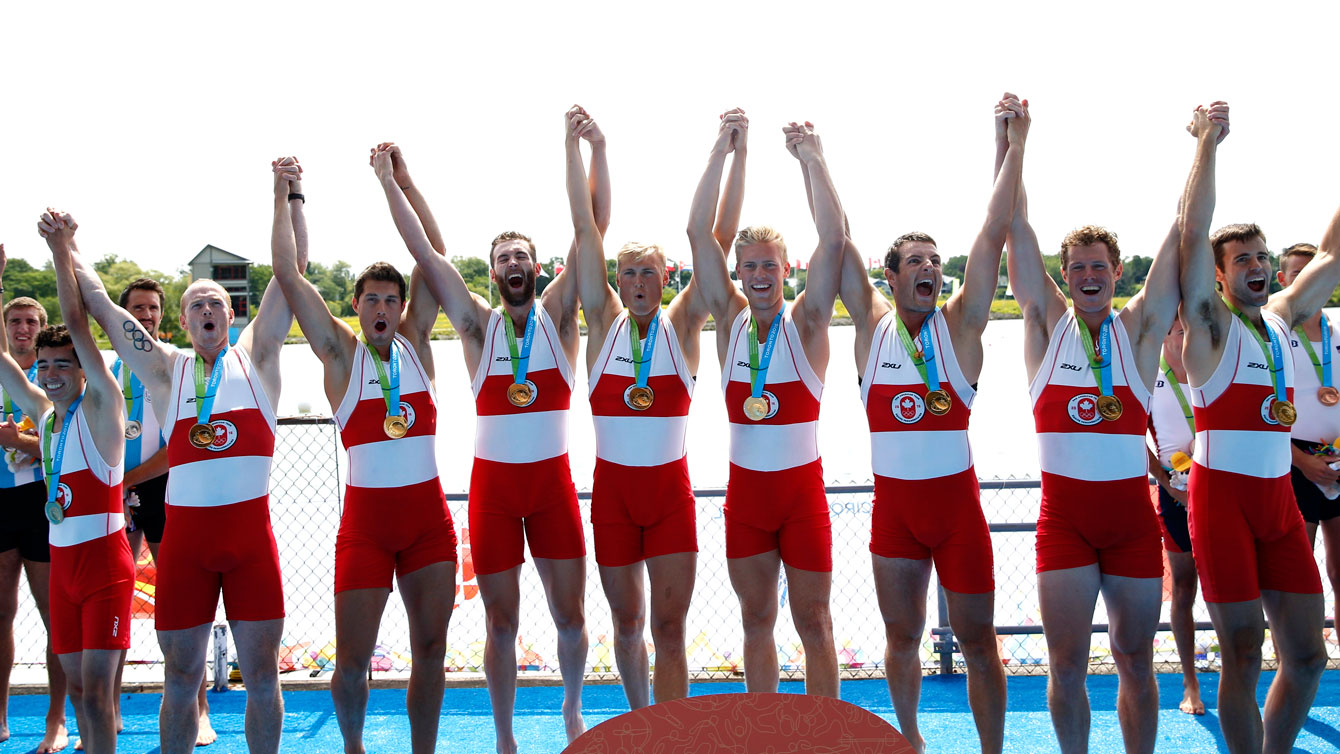 “(We) Stayed real loose, we had the best start, got out in front and as soon as we had our bow out in front, we were not going to let anyone row through us with this crowd right here.”

For the eight’s coxswain Koudys – along with Evans and Barakso – it was the first medal of TO2015, while the rest of the rowers on the boat had already been to a Pan Am Games podium in St. Catharines.

Canada won eight gold medals and 11 overall in TO2015 rowing. While the United States had nine medals, no country other than Canada had more than two gold.