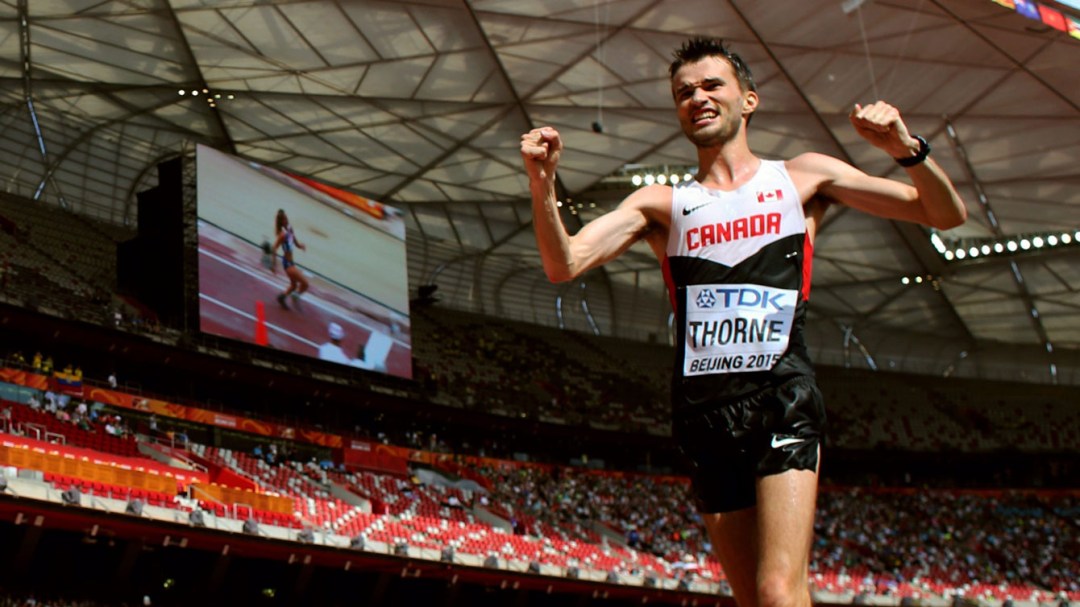 Feature photo: Ben Thorne as he crosses the finish line at the Bird’s Nest

A tactically sound outing from Canada’s Ben Thorne secured him a race walk bronze medal and national record at the IAAF World Championships in Athletics on Sunday in Beijing.

Thorne, 22, established a new Canadian best time of 1:19:57 in the 20 kilometre event. He is a part of an emerging group of race walkers representing the maple leaf worldwide to top international results. Thorne’s teammates Evan Dunfee and Inaki Gomez finished 1-2 at the Toronto 2015 Pan American Games earlier in the summer beating some of the world’s top race walkers. Dunfee and Gomez crossed the finish line in 13th and 15th places respectively.

Competing under the sun on a humid day, many of the top athletes struggled with conditioning. Where they fell, Thorne maintained, watching competitors ahead of him peel off one after another to fatigue or disqualifications. 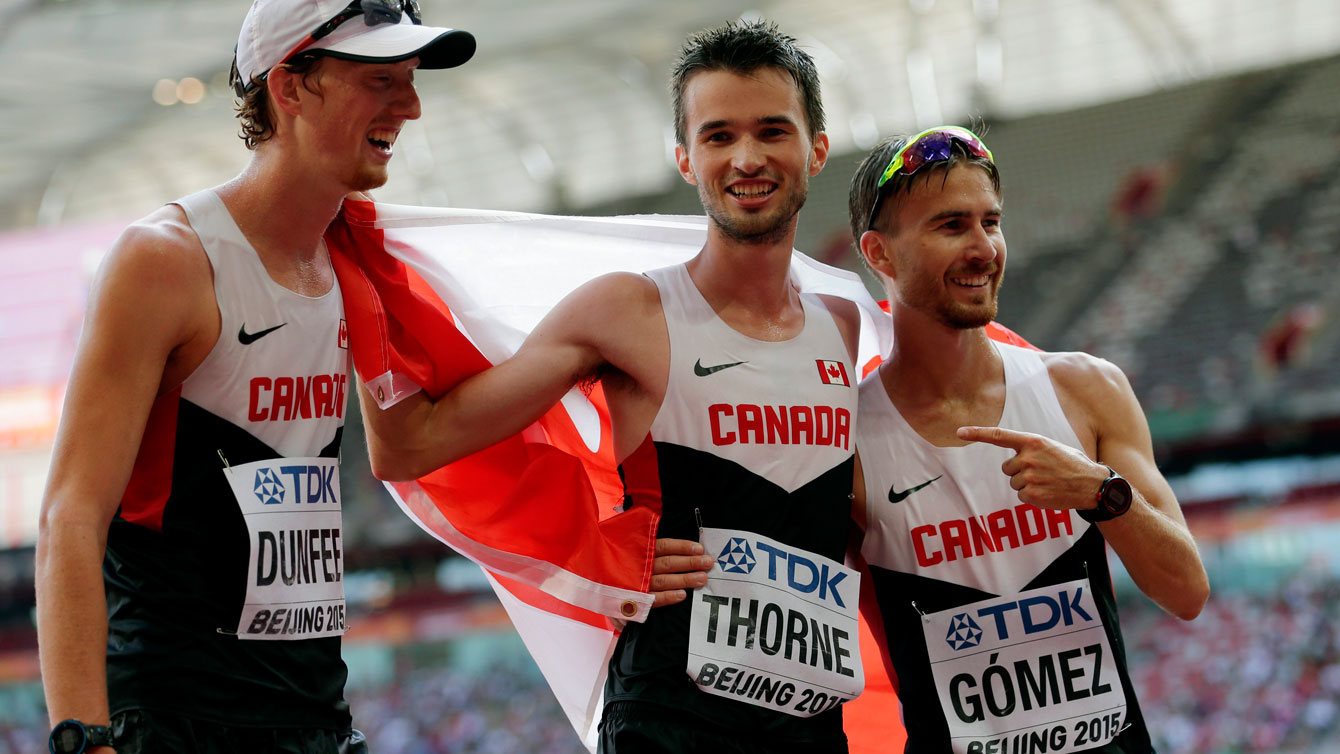 “When I was getting ready for Beijing, I just told to myself, well, it is going to be hard, lets hope for the (personal best). Then around 15k I started to think about the national record, felt OK, some people had dropped off already, and the bronze medal was like a dream to me,” Thorne said to IAAF.org.

Thorne broke Dunfee’s national record of 1:20:13 set in May of 2014. Athletes who struggled to meet the physical demands of Beijing included Japanese world record holder Yusuke Suzuki who had to stop, and ninth place finisher Ding Chen of China, the current Olympic Champion.

“I can hardly believe it, there was such a strong field of Japanese and Chinese walkers with fast times. I went sub-1:20 for the first time and the record is like a big bonus to me,” Thorne said. He also admitted that he wasn’t much bothered by the humidity and was well prepared. 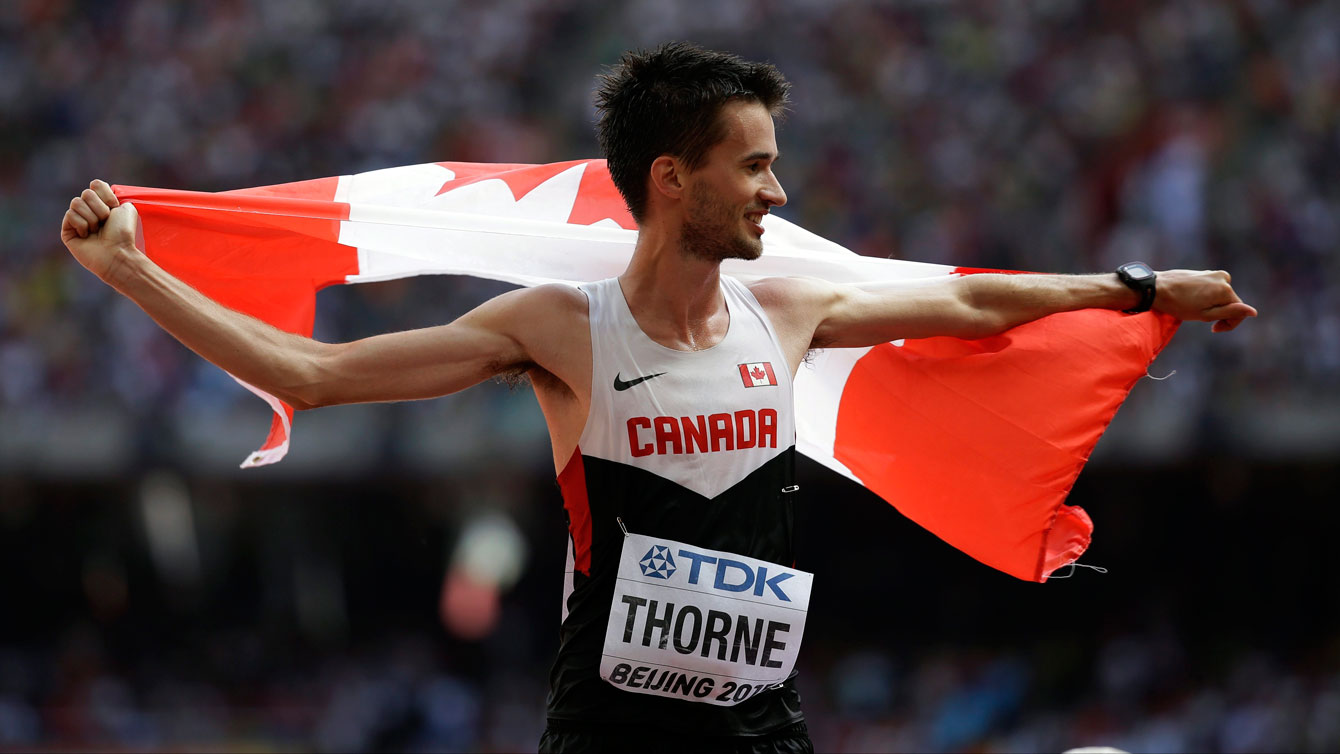 “We were lucky with the weather today as it was a bit cooler than yesterday. but hydration is the key. You have to hydrate yourself before the race properly and that gets you to the finish.”

A strong performance in a world championship less than a year to the Olympic Games can raise expectations. Thorne seems ready to embrace his role as a Canadian who can mix it up with the world’s best beyond Brazil in 2016.

“Thinking about Rio next year, I will stay with the 20k but thinking of the 50k (race walk) in the future too.” 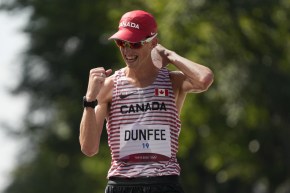