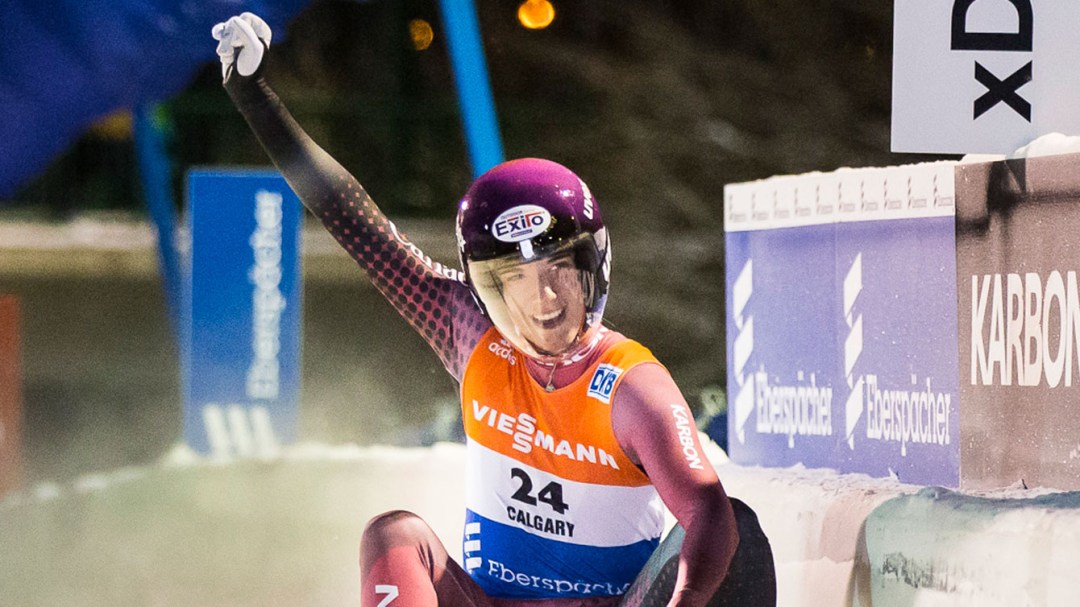 Marked improvements – including a national track record – were there for Canada’s luge athletes, but they fell shy of the podium at the only Canadian stop of the FIL Luge World Cup season.

🇨🇦 just shy of the podium but it was a fun and fast 💨 night of racing at the luge World Cup in #Calgary. More #TeamCanada races on Saturday.

The current crop of Luge Canada senior team members racing on their home track at Calgary’s WinSport Olympic Park, provided a thrilling series of opening runs in the women’s competition. First to fourth places were separated by just over eight one hundredth of a second, with three-time Olympian Alex Gough looking up for a place on the podium. The three athletes in her way included teammate Kim McRae, who was third going into the final run.

That final on the Calgary 1988 Olympic track belonged to Germany’s Natalie Geisenberger. The reigning world and Olympic champion went up from second to first with a total time of one minute, 33.569 seconds, ahead of Erin Hamlin of the United States (1:33.581). Another American, Summer Britcher (1:33.712), pulled ahead of the two Canadians for third place, while Russian Tatiana Ivanova set a track record (46.525 seconds) on her second run to take fourth. 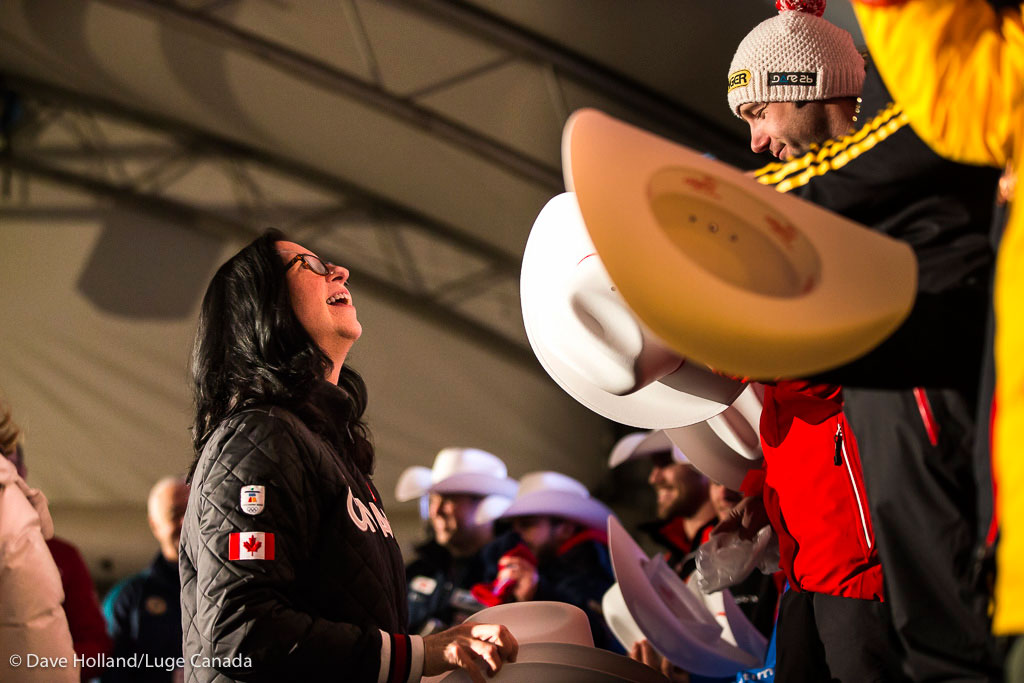 Canadian Olympic Committee president and Olympic rowing medallist Tricia Smith hands out prizes at the podium following the doubles and women’s competitions at the Luge World Cup in Calgary on December 18, 2015.

McRae and Gough had to settle for fifth and sixth in the 24-women field. Another Canadian Olympian, Ariane Jones in her first World Cup of the season, was 11th.

For McRae – who took up taekwondo to complement her training in the offseason – it was her best outing of the season. She also set a Canadian track record on the night with her second run clocking at 46.836 seconds for a total time of 1:33.798.

Earlier in doubles competition on Friday, Olympians Tristan Walker and Justin Snith also enjoyed their top World Cup result of the season, climbing up to fifth place after a less than ideal opening run.

The second duo from left, Tristan Walker and Justin Snith just off the Luge World Cup doubles podium after fifth place in Calgary on December 18, 2015.

Following their first attempt, Walker and Snith were in eighth place with a time of 44.638 seconds. They took nearly three tenths of a second off their final run to move up three places. Toni Eggert and Sascha Benecken of Germany took top spot with a combined run time of 1:28.223, while Peter Penz and Georg Fischler were second in 1:28.327. The Canadians were 0.454 seconds off the podium, the final spot going to Germans Wendl and Arlt Tobias (1:28.580).

Canadian men competed on Saturday with Mitchel Malyk as the top local in 10th place – another personal best this season. Malyk had a strong opening run after which he was eighth. The 20-year old wasn’t able to duplicate that form on his second go, falling two spots with a slower run.

Three-time Olympic gold medallist Felix Loch won the men’s competition to complete the German dominance in Calgary over the weekend. 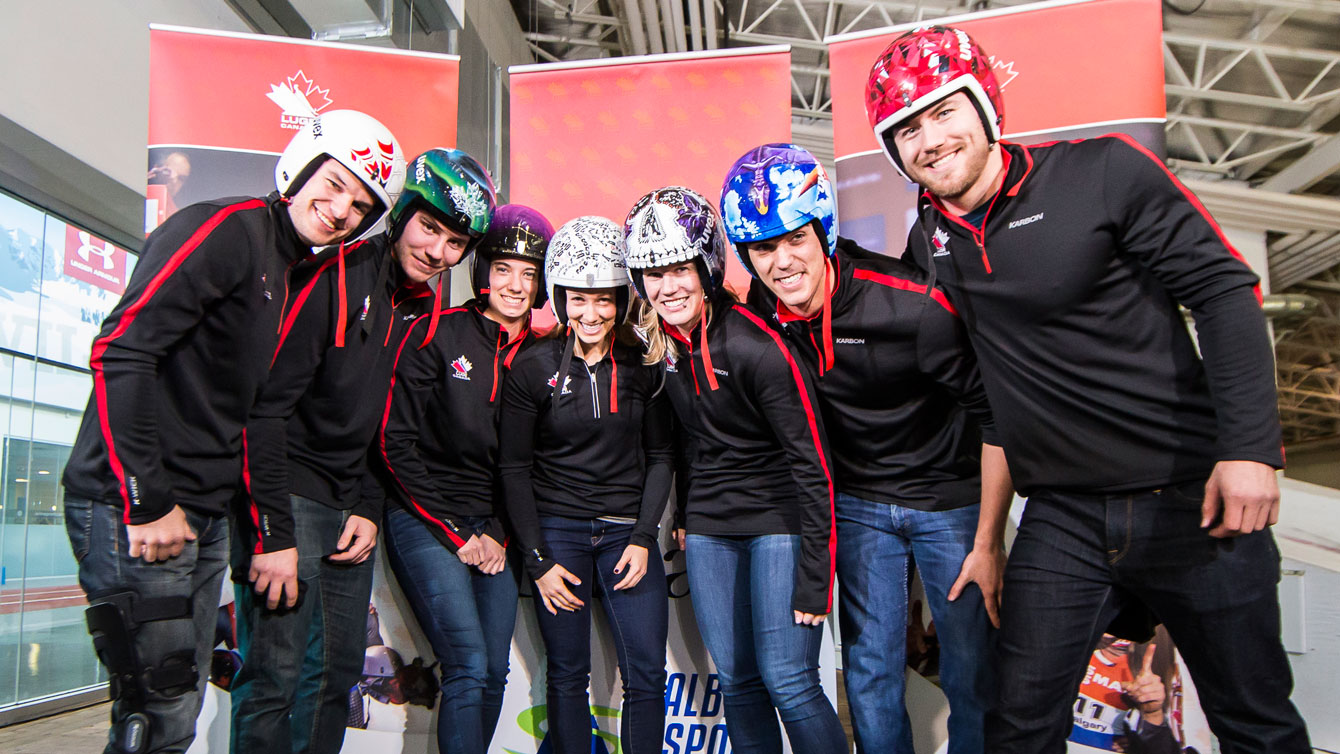 Canadian Luge Association athletes show off their artist-designed helmets on December 14, 2015, ahead of the Luge World Cup in Calgary (Photo: Dave Holland/Luge Canada).

Seven of the Canadians competing this weekend will be wearing helmets designed by local artists as part of the Helmets for Heroes campaign. The brain-injury prevention initiative sees the athletes partnering with children affected by brain injuries and local artists to design helmets that will be worn for the remainder of the season.

At this event in Calgary last season, Canada enjoyed a tremendous weekend where the Helmets for Heroes legend grew. Jones grabbed a bronze medal in her hometown (first career World Cup podium), in the same race that fellow Calgarian Gough was second; while Walker and Snith struck bronze in the doubles. If that wasn’t impressive enough, Sam Edney won a historic gold after wearing a Helmets for Heroes designed headpiece in his men’s race. 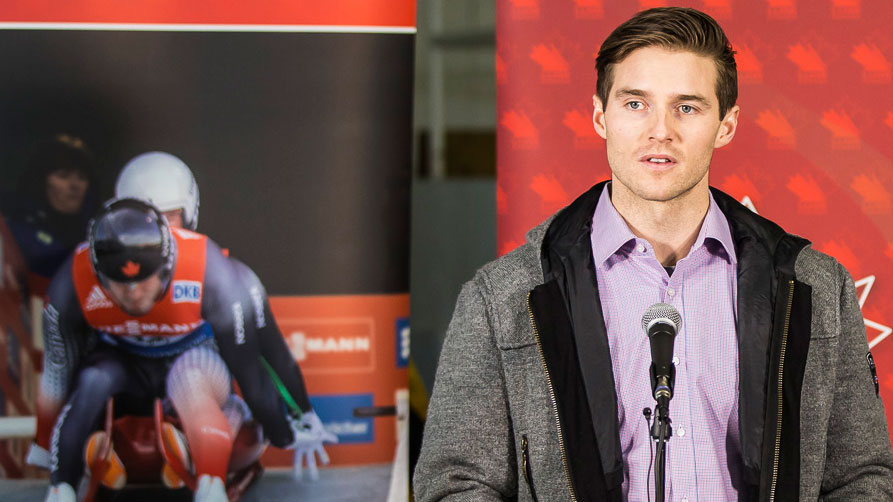 Edney is taking this season off to focus on school. It was his good friend and Olympic alpine skier Brad Spence who launched the Helmets for Heroes initiative with Edney last season. The idea comes from Spence’s own experience with a young cancer patient designing his Sochi 2014 ski helmet.