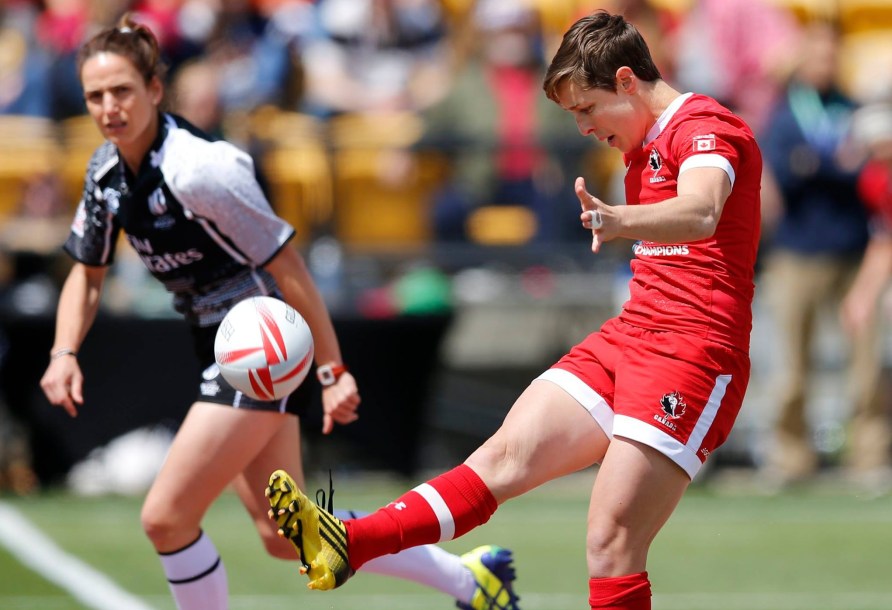 Ghislaine Landry reached 500 points for her career in the World Rugby Sevens Series with her latest exploits in Atlanta, where Canada finished in fourth place.

Atlanta Sevens kicked off the first of two back-to-back weekends of play in North America, with the teams continuing on to a Canadian event to be hosted in Langford, April 16-17 (more on that here). 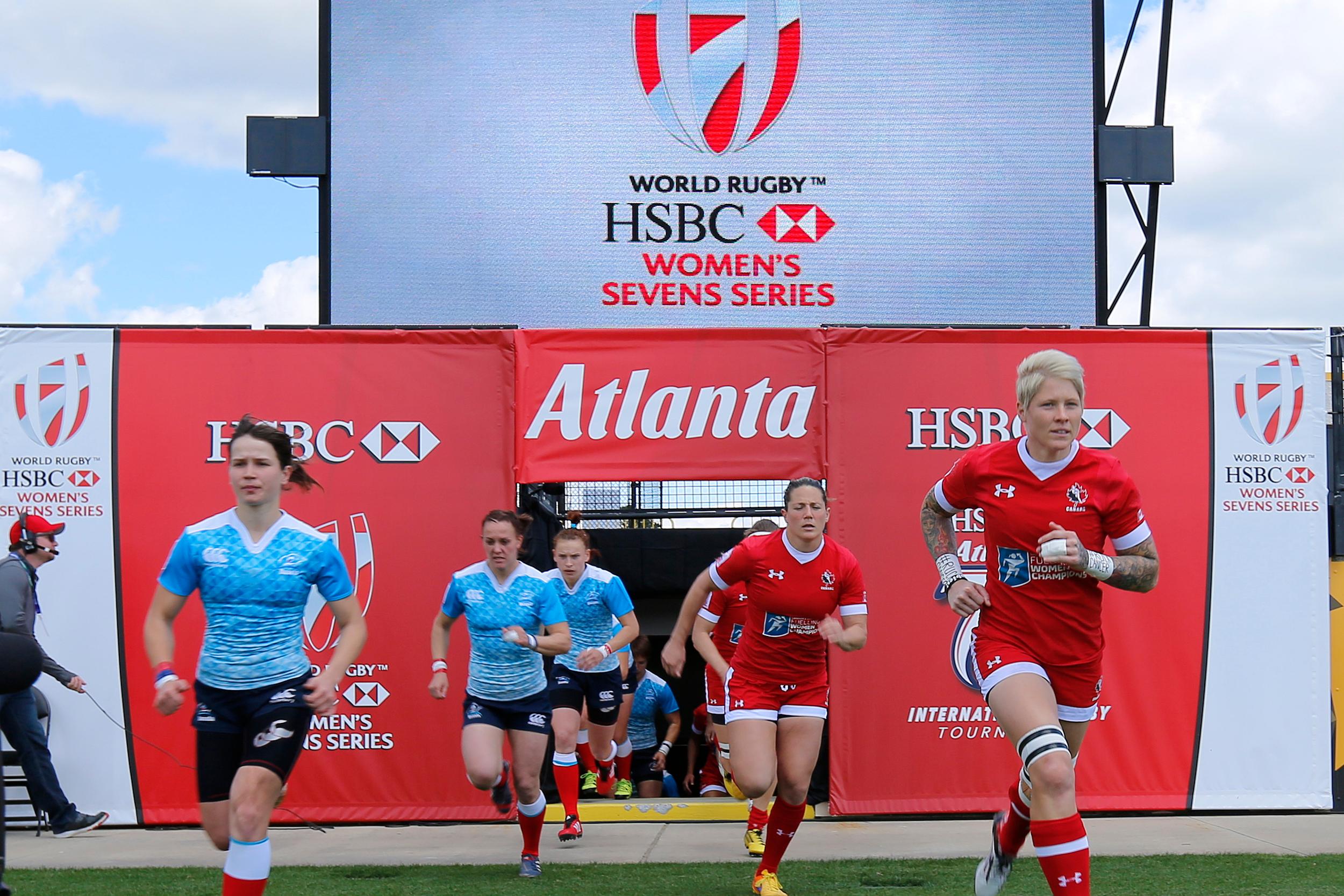 Get tickets to Canada Sevens in Langford

After finishing the first day with an undefeated 3-0 record (more on that below) Canada’s chance to get a top three place was thwarted by losses to Australia, then England, countries that will undoubtedly be in the Canadians’ way at Rio 2016. 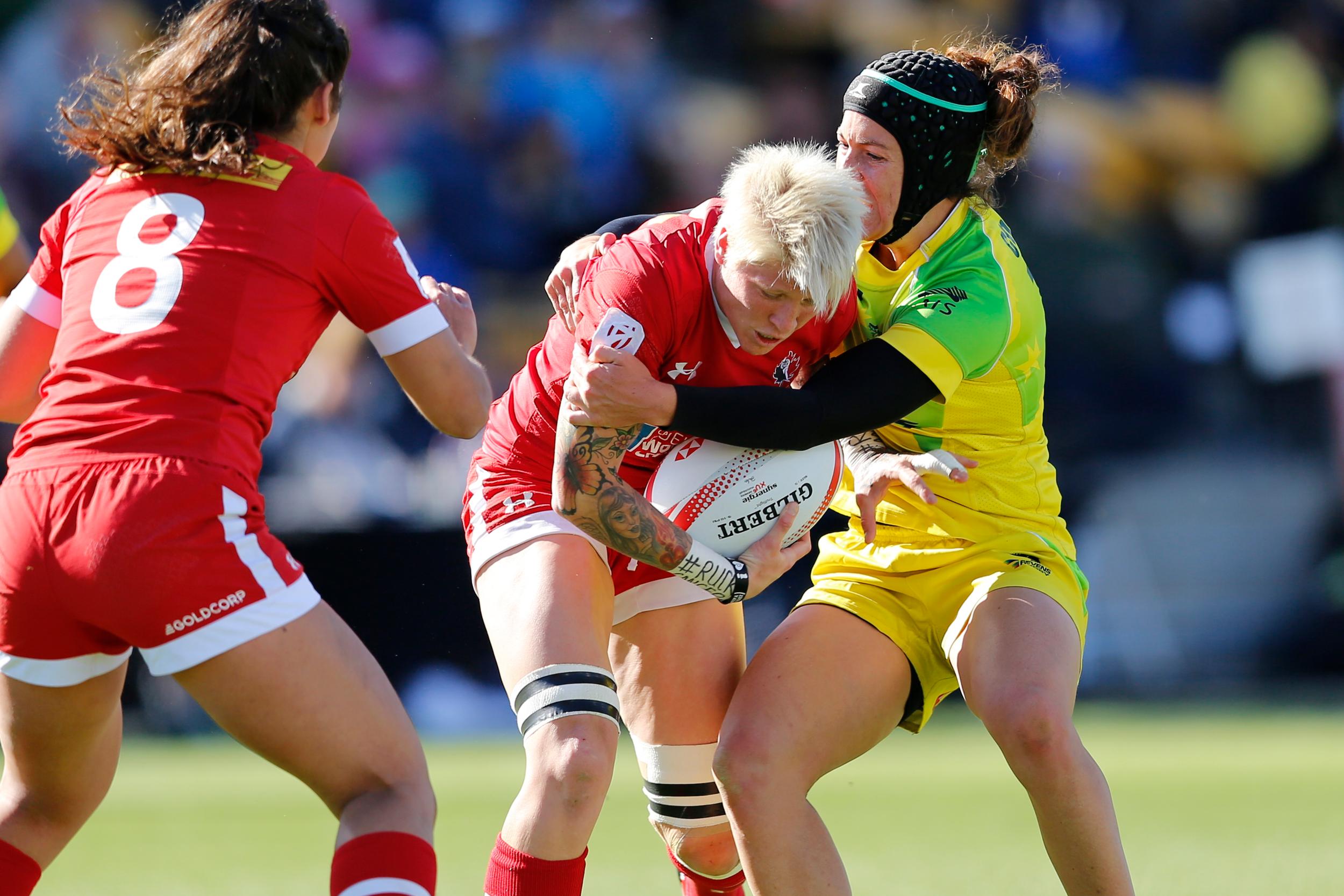 In recent history these teams are tied, each winning seven of their last 14 matches against each other. Emily Scott scored first for England with Katie McLean scoring the conversion. England received a yellow card with three minutes left in the half freeing up some space for Canada to score. Bianca Farella got the try, with the conversion being made by Ghislaine Landry to tie the game 7-7. Hannah Darling made a textbook tackle to prevent another scoring opportunity for England, however just before half, England scored one more try and a conversion.

England continued their scoring with another try after the half. England Captain Emily Scarratt chipped the ball over the Canadians and chased it into the end for another five followed by a conversion, making it 26-7. Charity Williams and put the final touch on the final game scoring one last Canadian try at Atlanta Sevens. Landry scored the final conversion, which marked her milestone 500 points scored in the World Rugby Sevens Series. 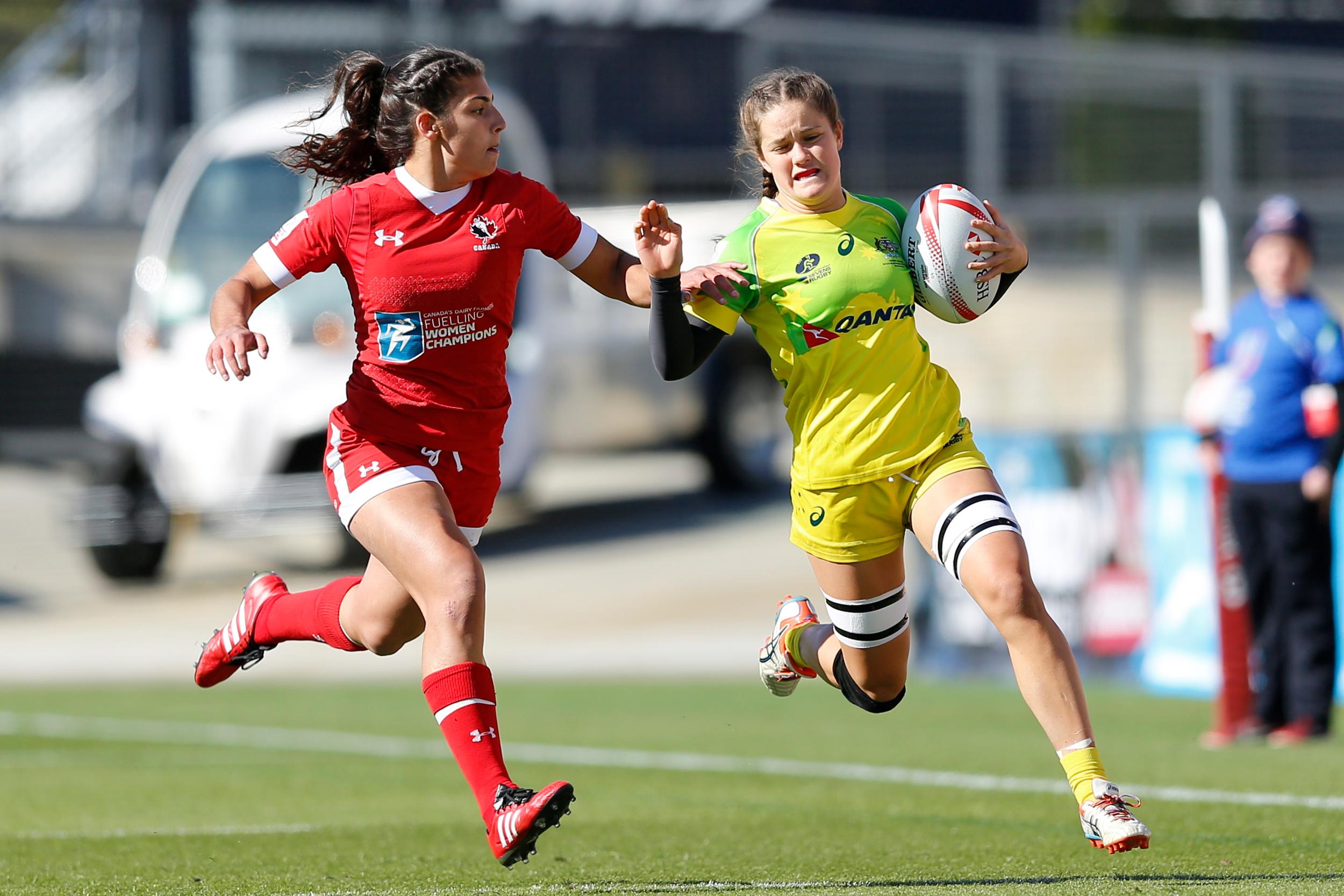 Facing the overall number one seeded Australia was no doubt a challenge for the Canadian women, as Australia had won the last nine of 13 games between the two.

Australia opened the scoring with an early 14 points. Landry got Canada back in the game with a try right before the half, and Kelly Russell made the conversion making the total 14-7 for Australia after seven minutes.

The Canadian team came together in the second with a few near perfect passing lines leading to Karen Paquin scoring a try and Russell scoring a conversion to tie the match. Australia came back to score two tries and a conversion to win the semifinal 26-14. It was an impressive showing by the Canadian squad, however it wasn’t enough to overtake powerhouse Australia. 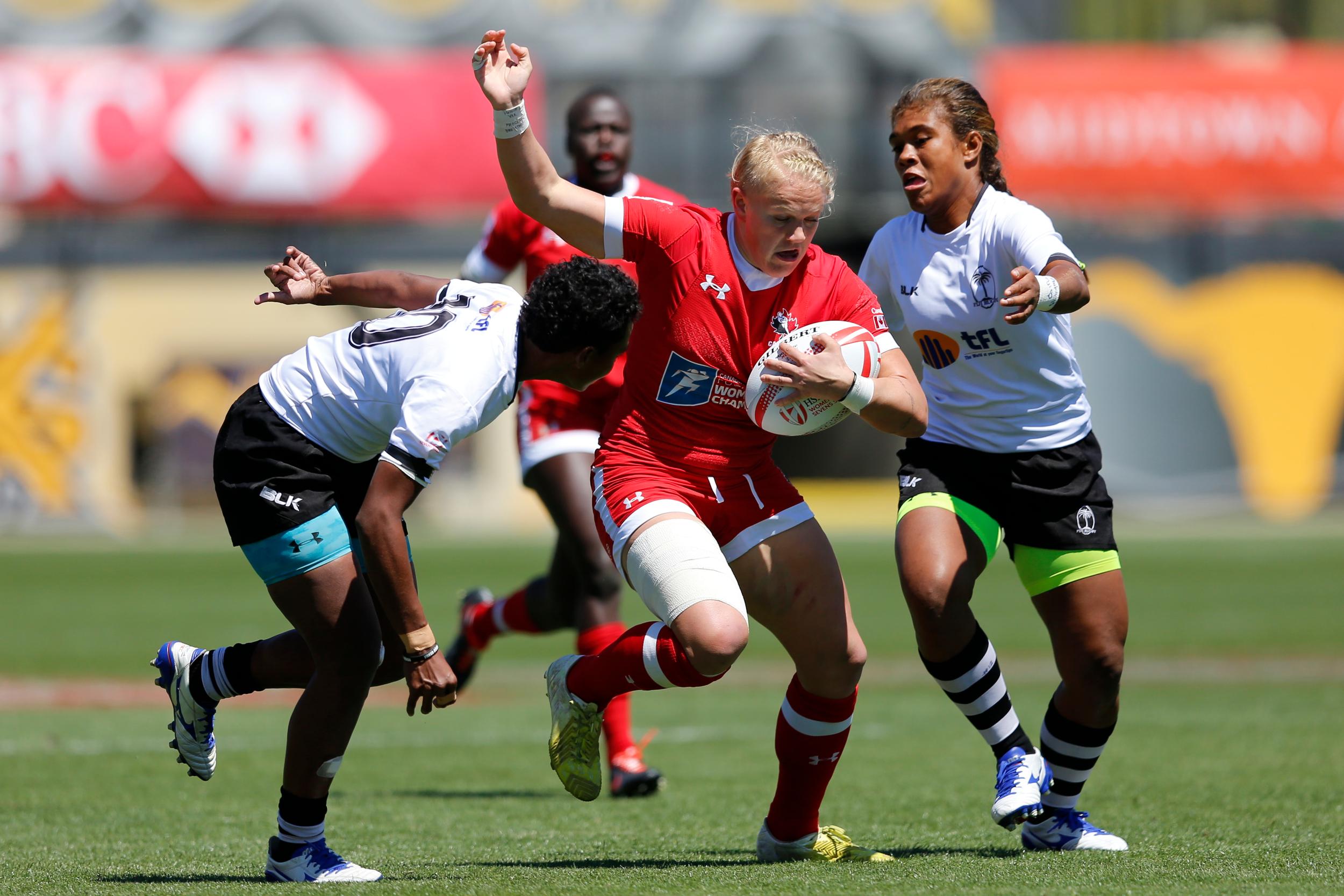 Canada had won four of the last five matches against Fiji. Landry was on fire and put Canada ahead early, scoring a hat-trick and two conversions to make it 19-0 at the half.

The second saw Emmanuela Jada score her second try in her debut tournament for Canada, bringing the total to 24-0. Biance Farella scored the last try to advance Canada to the cup semifinals with a 29-0 win.

Get to know Sara Kaljuvee 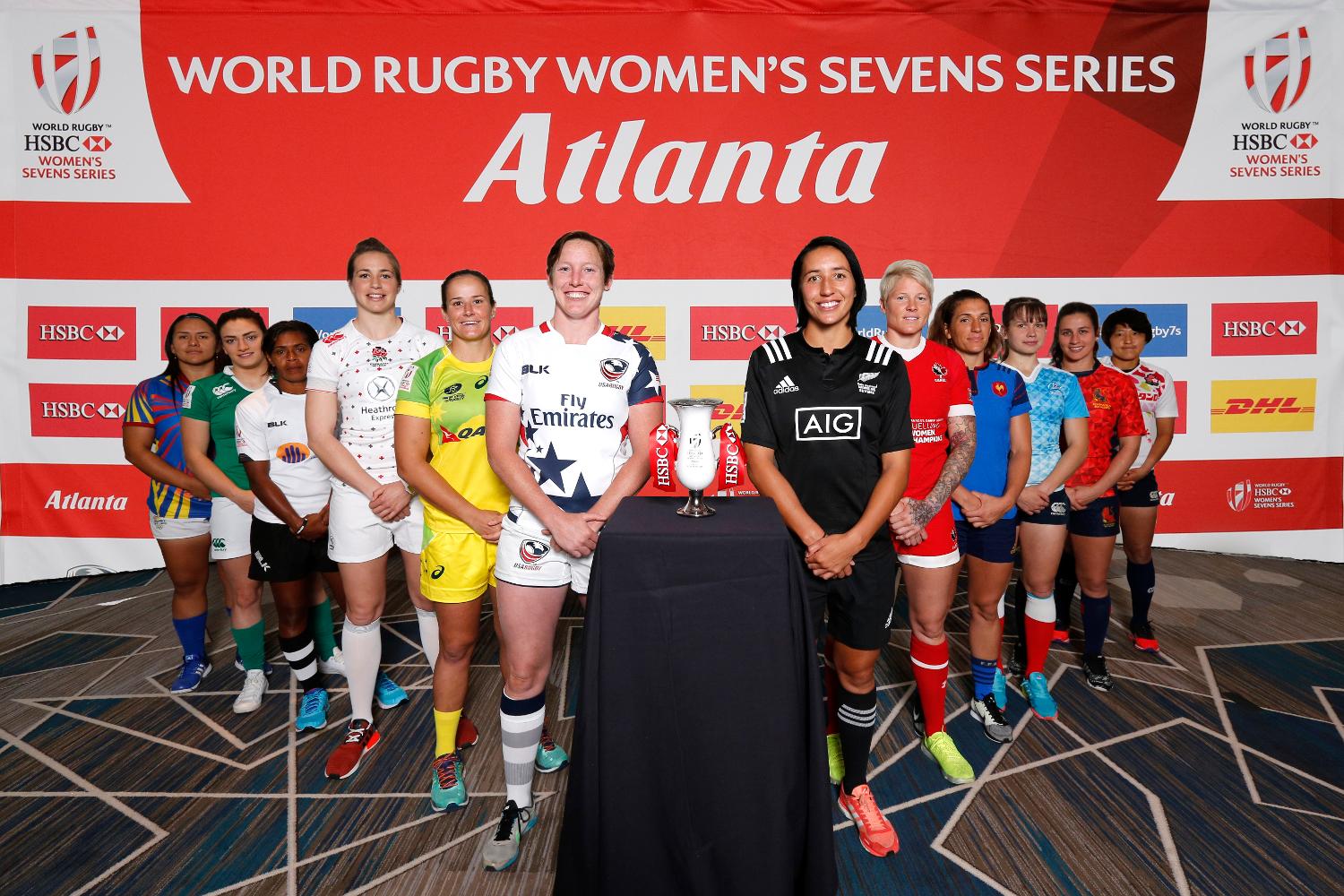 Going into the Atlanta stop, the Canadian women sat third in this season’s overall standings, hot on the trail of second place New Zealand. The team started off day one in Pool B, facing Russia, Ireland, and France. Canada won all three matches: 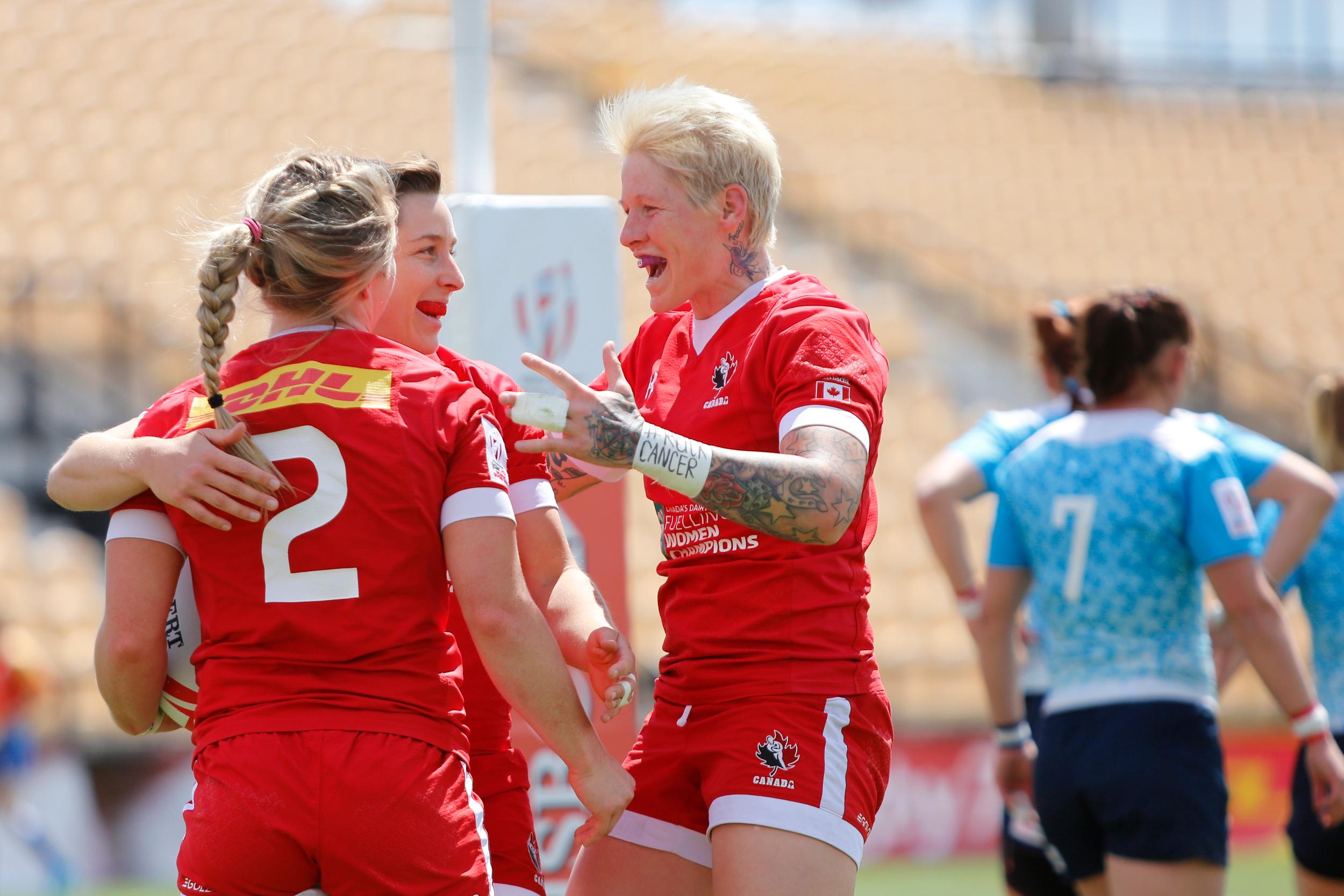 Heading into their third match, both of these teams were unbeaten in day one. In recent match-ups Canada has won eight of the last nine matches against France, last meeting in Sao Paulo in February 2016, where Canada beat France 19-0 in the cup quarterfinal.

Both sides missed a few early point opportunities, however France got the first try of the match, scored by Lina Guerin. The conversion was also successful making it 7-0. Captain Jen Kish didn’t waste much time though, making it into the try zone shortly after to get Canada on the scoreboard. Landry got Canada in the lead, speeding through a gap to make it 10-7.

25 seconds into the second half Kish capitalized on an error by France to score a try. Landry added two more points with a conversion. Deep in Canada’s end France took the ball off a breakdown to score five points in the corner, bringing the final score to a 17-12 win for Canada. 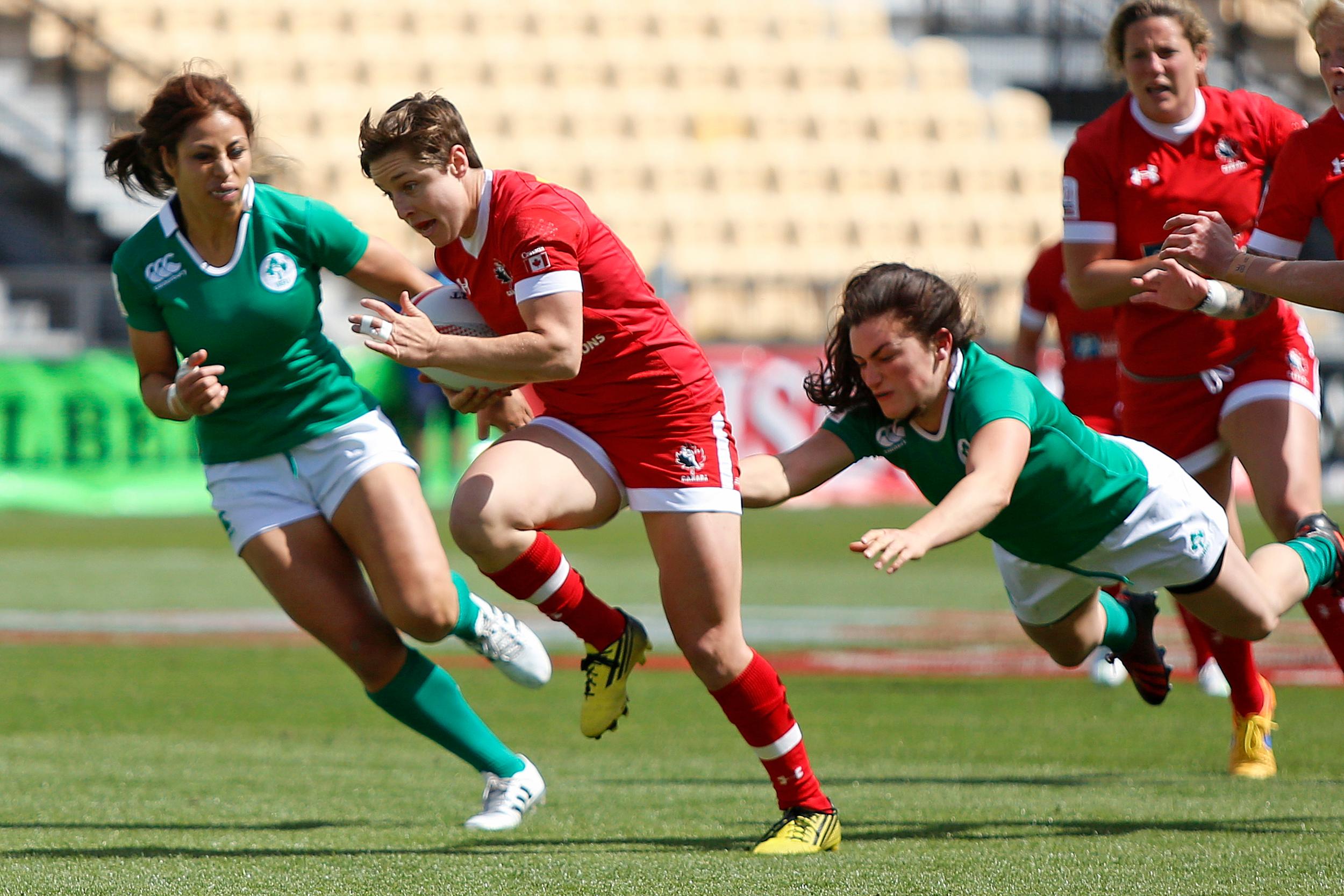 Canada started this match with high energy, seeing Farella score the first try, speeding down the sideline, just a little over a minute in. The Canadian squad got a significant overlap on the Irish, scoring a second try by Farella just minutes later, Landry added a conversion to bring the score to 10-0. Landry and Russell added try and a conversion respectively to make it 19-0 at the half-time whistle. 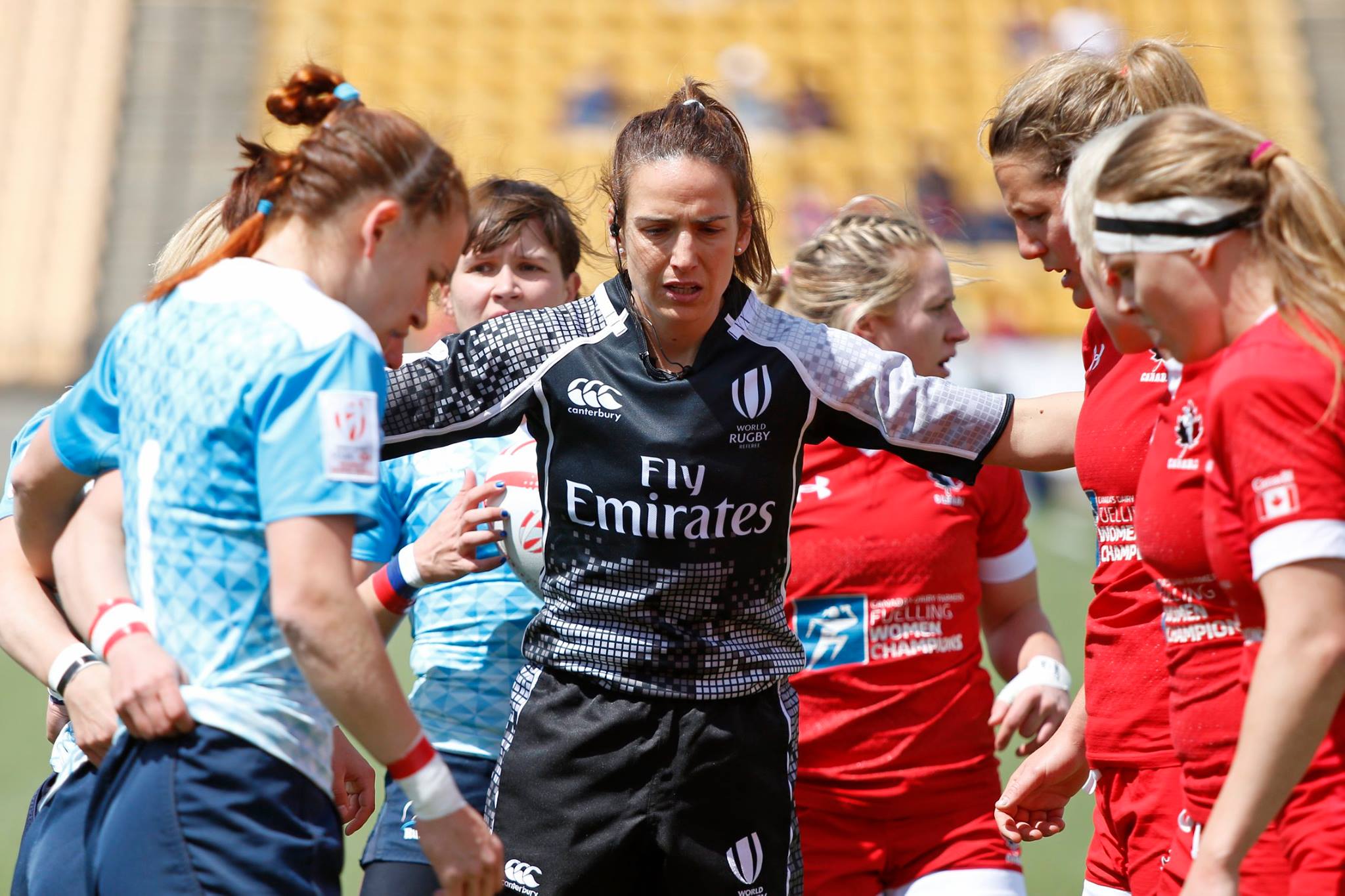 Canada and Russia played the first match of the weekend. These teams last met in London in May 2015 during the cup quarter final, which Canada won 26-5.

Russia’s Baizat Khamidova caught the opening kick-off and scored inside of the first 30 seconds. Canada’s Paquin evened up the game four minutes later. A little off their game in the first half, the half-time chat seemed to do the trick as Canada owned the second.

The kick-off of the second half went directly into the hands of Paquin, giving Canada a rush of momentum and translating into five more points. Russell followed that up with a beautiful kick, bending through the uprights to secure two more points. Kayla Moleschi made it obvious that Canada was in control, scoring about three minutes into the second. Landry got the conversion off Moleschi’s try making it 19-5. Moleschi sprinted through the Russian defence once more to score a try for Canada, with Russell securing the conversion, finishing the game 26-5.

Check out these day one highlights:

HIGHLIGHTS: #Canada went a perfect 3-0 on Day 1 of the @Atlanta7s setting up a cup quarter clash with @FijiRugby!https://t.co/PPuqE0RQ6z 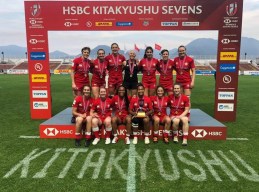