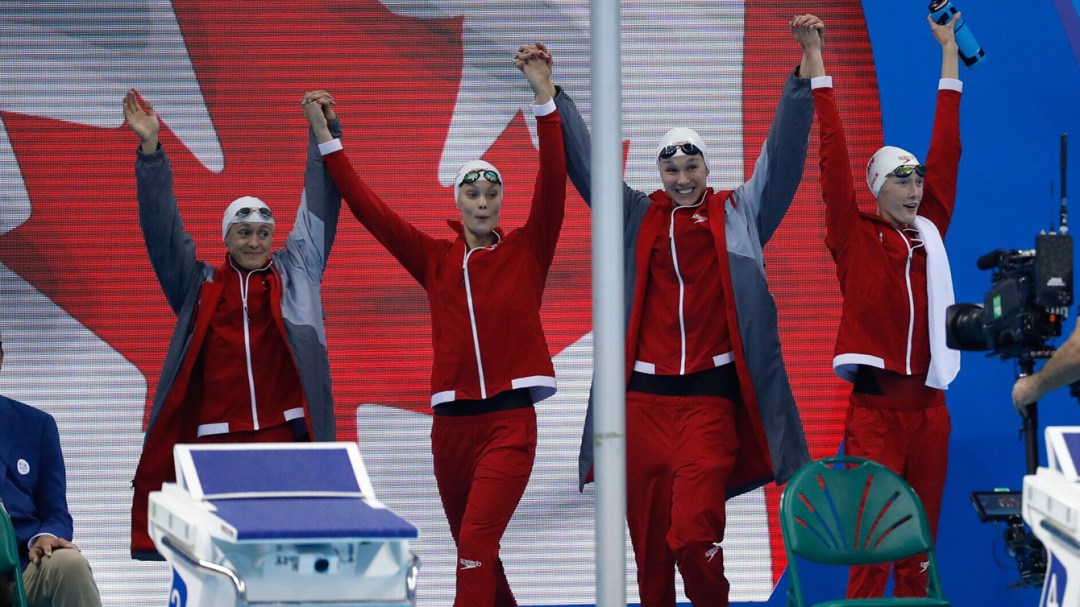 Day 1 of the Rio2016 Olympic Games is filled with ups and downs. Fans and athletes have taken to social media to support #TeamCanada

Through the thick and thin, the fans are with Canada the whole way through. Updated as the day goes on, check out what fans and athletes have to say about the day.

Bronze for the women’s 4x100m freestyle 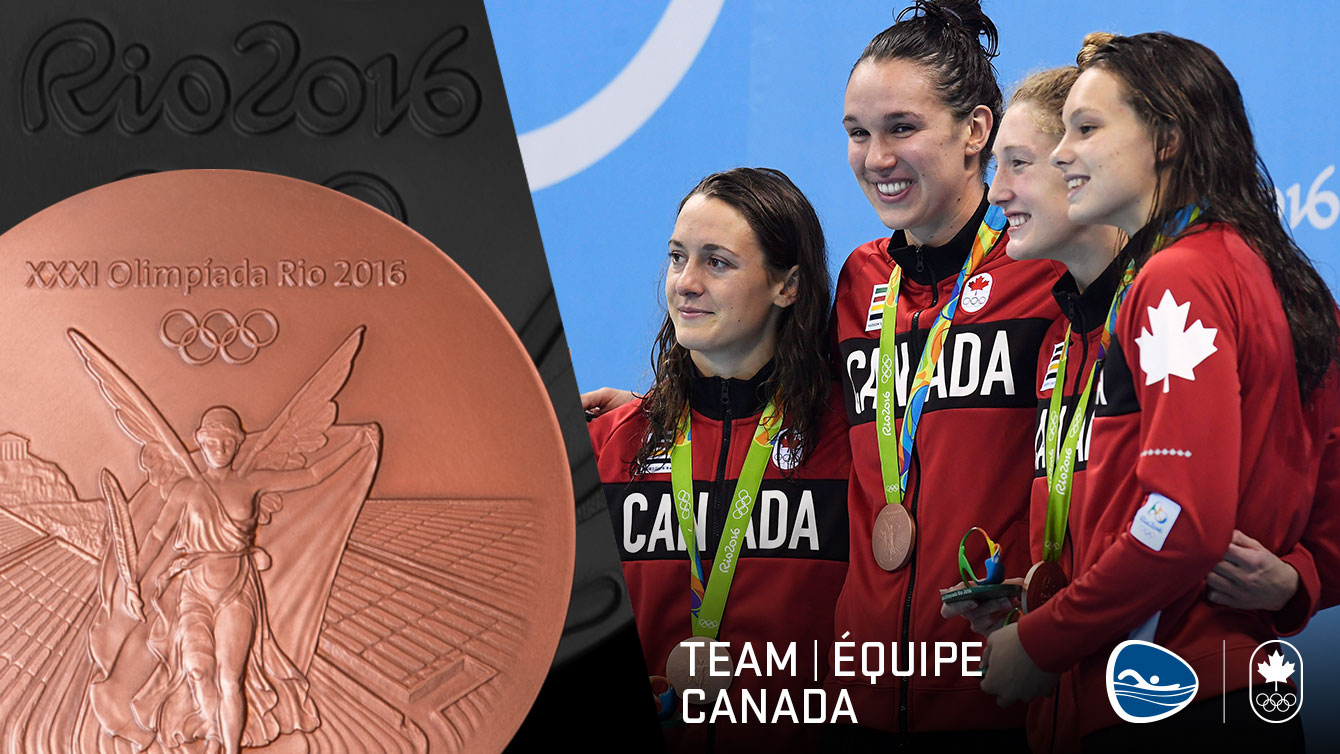 Penny Oleksiak competed in the 100m butterfly semi-final. After swimming 57.10 and placed fifth overall, she has qualified for the finals.

Huge props 2 #CAN @overholtemily though with strong 5th place finish in the 400m IM #swimming final. Great start for @TeamCanada in the pool

Eugenie Bouchard made her Olympic debut in women’s singles against Sloane Stephens. Bouchard won her match 6-3, 6-3 and will be playing on Sunday in doubles with teammate Gaby Dabrowski.

Fantastic defense from @geniebouchard to get her first breakpoints #Rio2016 #TeamCanada

Leonora Mackinnon competed in the individual epee event. Winning her first match 15-10, she moved forward to the next round and lost by 8-15.

@Leo_Mackinnon Please don't be disappointed! You made Canada PROUD! Don't you forget that! You are a Champion no matter what! @TeamCanada 🇨🇦

Field hockey – CAN vs Germany

The men’s field hockey team has taken on Germany in the round robin tournament. Losing their first match 2-6, Canada looks ahead.

Nice play by @FieldHockeyCan to score on Germany! Come on #Canada! #teamcanada#CBCOlympics

Rugby – CAN vs Brazil

The rugby girls took on Brazil for the second match of the day. They were victorious with a 38-0 win, ready to face Team GB tomorrow.

@RugbyCanada women are killing it! First half down and I can already taste the gold.#RioOlympics2016 #TeamCanada

Football – CAN vs Zimbabwe

Canada played Zimbabwe in the round robin portion of the tournament. With two goals from Janine Beckie and one from captain Christine Sinclar, the women won the game 3-0 and will advance to the knockout round.

Cheering #TeamCanada in womans soccer against Zimbabwe. Half time and they're up 3-0. Dominating the play.

Basketball – CAN vs China

Solid 1st game in the books. Shout out to @8kimsmith for her 200th game! #TeamCanada #Rio2016 pic.twitter.com/dcA3nyHyey

Canada put on a dominant display against China, winning 90-68. All twelve Canadians have scored in this game. All. Twelve.

Emily Overholt squeezed into the finals by placing 8th overall in the 400m IM. Tune into swimming tonight at 8PM local Rio time to watch the finals.

Ryan Cochrane was inched out of the 400m freestyle finals and did not qualify. He will be looking forward to the 1500m freestyle as his final competition of the games.

Great swim Ryan Cochrane! It was a close heat! #CAN #Rio2016 #TeamCanada

Penny Oleksiak broke her own Jr. record i the 100m butterfly and the women’s 4x100m freestyle team qualified for the finals tonight.

Rugby – CAN vs Japan

In their debut, the rugby team cleaned up against Japan winning their first match 45-0 and fans had a few things to say about that.

Put my heart and soul out there today and had a blast! Thank you Canada for always having my back 🙏🏻🎉🇨🇦 #teamcanada #olympics #olympian #gymnastics #starttheshow #honoured #gocanadago #iceinourveins #heartandsoul #thankyou #bestsupportever #blessed #awesome #fun #roadtorio

Scott Morgan is the lone male gymnast competing. With the women’s team int he crowd and fans rallying behind him, he performed a fantastic morning.

Josh Binstock and Sam Schachter took on Brazil, reigning world champions during their first match of the tournament. Although the game resulted in a loss, Linstock and Schachter held their own tested Brazil. Fans united behind them in support.

The boys should be happy with that. They did amazing against the world champions. #TeamCanada #beachvolleyball

Sharon and I are cheering on #TeamCanada at the equestrian dressage competition at #Rio2016. pic.twitter.com/xojOQ6FmVx

Carling Zeeman battled the tough conditions and raced in her first heat this morning. After winning it by a landslide she will be advancing to the quarterfinals.

Was yelling at the TV during a rowing event. Rowing. Olympic fever has officially taken over. #teamcanada. #RioOlympics2016

Rowing is an outdoor sport and today we didn't do our best in the tricky conditions. Excited for the opportunity we have tomorrow!

Julien Bahain, Will Dean, Pascal Lussier and Rob Gibson of Tthe men’s quadruple sculls were going strong until they hit a bad wave and lost grip. They’re onto the repechage where they will attempt to move forward in the Regatta.

Team Canada has united after the opening ceremony and fans are ready to throw their support behind their athletes.

Last night was amazing! I was overcome with joy and pride leading OUR team into the Opening Ceremony! The Olympic Games are an incredible celebration of humanity. There were a record breaking 207 nations that marched in the parade last night and the first ever World Team of Refugees. It was the magic of these ceremonies that inspired my imagination as a kid but the values that these Games represent that made me dig deeper and push harder. Last night, I had the opportunity to share a decision I made. Winning in London was beyond a dream come true. One of the best opportunities that I have had since London is getting involved with organizations that I love including @ctjumpstart When I was faced with uncertainty last year, my sport psychologist encouraged me to continue finding deeper meaning from this sporting journey and it was then I knew if I made it back to the Olympic Games, I wanted to contribute what I won in London to Jumpstart so that if a kid is inspired by these Olympic Games and these athletes, they will have the chance to start their sporting journey whether for an active life or to pursue a dream of one day wearing the maple leaf. CANADIANS! Over the next 16 days, your team will make you feel every single possible human emotion! If you are inspired by these athletes or moved by their stories, I encourage you to get outside and play! Take your kids out to play! Volunteer in local sporting programs or competitions! Or if you are in a position to be able to, make a contribution to Jumpstart to help a kid kickstart their sporting journey!! #StepUpStandTall !! 🇨🇦🇨🇦🇨🇦🇨🇦

So happy for all the athletes participating at the #RioOlympics2016 Make us proud and show what the North is made of! 🇨🇦✌🏻️ #TeamCanada

It's acceptable for me to just sit here and watch the olympics all day right? #TeamCanada