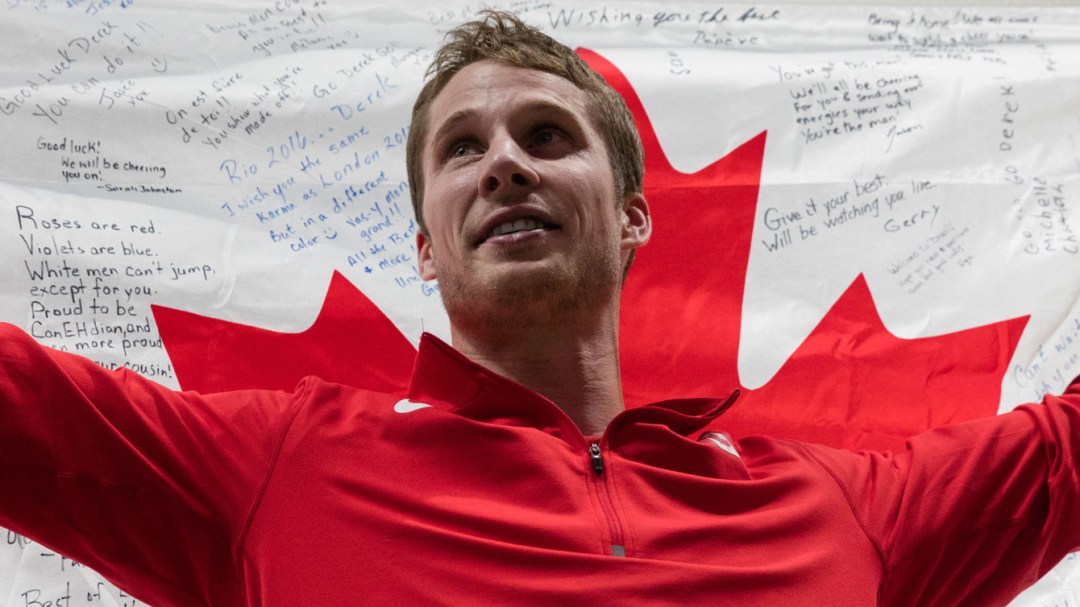 Team Canada’s official Olympic promotional video for Rio 2016 was called Ice in our Veins, and lucky for Canadians, there aren’t many athletes on the planet who exemplify coolness under pressure better than new Olympic high jump champion, Derek Drouin.

Although Drouin wasn’t in the videos and posters for the marketing campaign (there’s a complicated scheduling process to these things), he showed on Tuesday night that a cold-as-ice demeanour is very much a Canadian trait in elite sports. 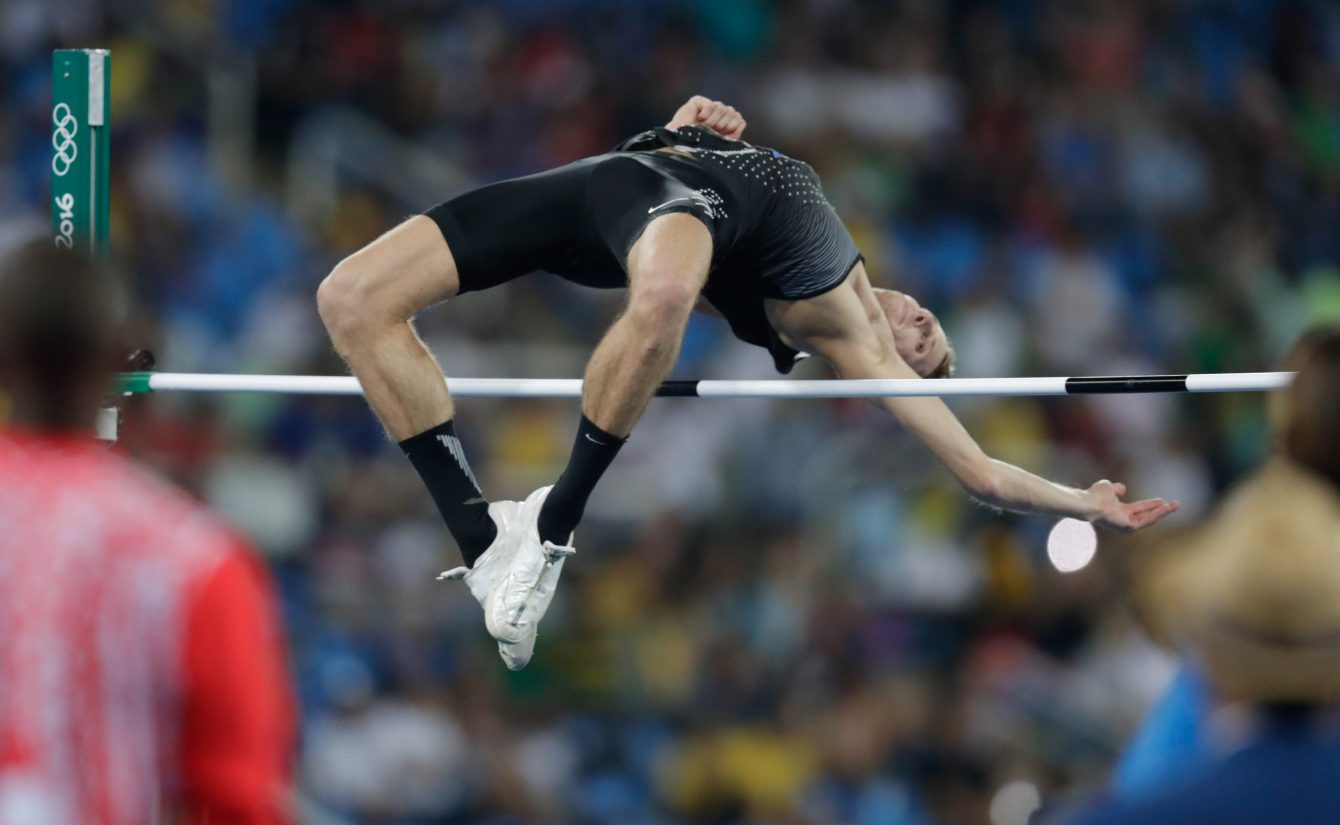 Canada’s Derek Drouin after an attempt in the men’s high jump final during the athletics competitions of the 2016 Summer Olympics at the Olympic stadium in Rio de Janeiro, Brazil, Tuesday, Aug. 16, 2016. (photo / Jason Ransom)

“I wouldn’t say that I feel a lot of pressure, I do a pretty good job of dealing with it but there’s always some,” Drouin said after winning Olympic gold, which he adds to his world championship title from Beijing 2015.

He also won Olympic bronze four years ago in London, after which he said he felt “ecstatic” and “relieved” finishing third. That wasn’t going to be enough in Rio. 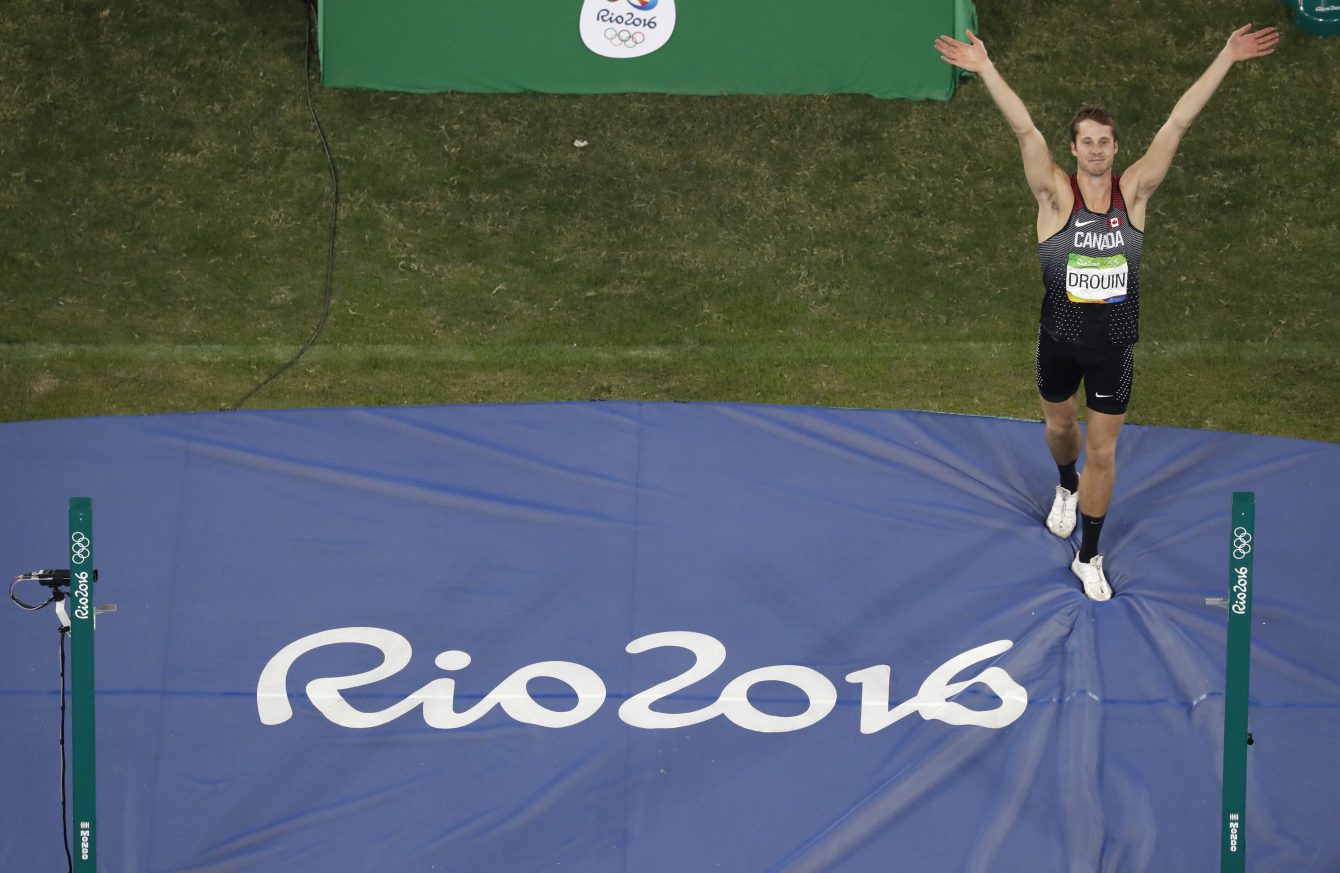 Canada’s Derek Drouin acknowledges the crowd after his last attempt during the high jump finals during the athletics competitions of the 2016 Summer Olympics at the Olympic stadium in Rio de Janeiro, Brazil, Tuesday, Aug. 16, 2016. (AP Photo/Morry Gash)

“I think at that point, I’d be disappointed with anything less. So I certainly didn’t take a sigh of relief. I was gunning for the main goal.”

An athlete who doesn’t feel pressure can be very difficult to beat, and few in any sport are harder to take down in their discipline than Drouin is in major high jump competitions. He is now the undisputed favourite anytime he enters a top high jump contest, having also won Pan American and Commonwealth Games gold in the last two years to go with his world and Olympic titles.

Drouin cleared six jumps during the main portion of the competition, registering everything from 2.20 metres to 2.38 to win gold. When it was done and dusted, he went for a 2.40 for the fans, but missed, with no consequence to his podium position. 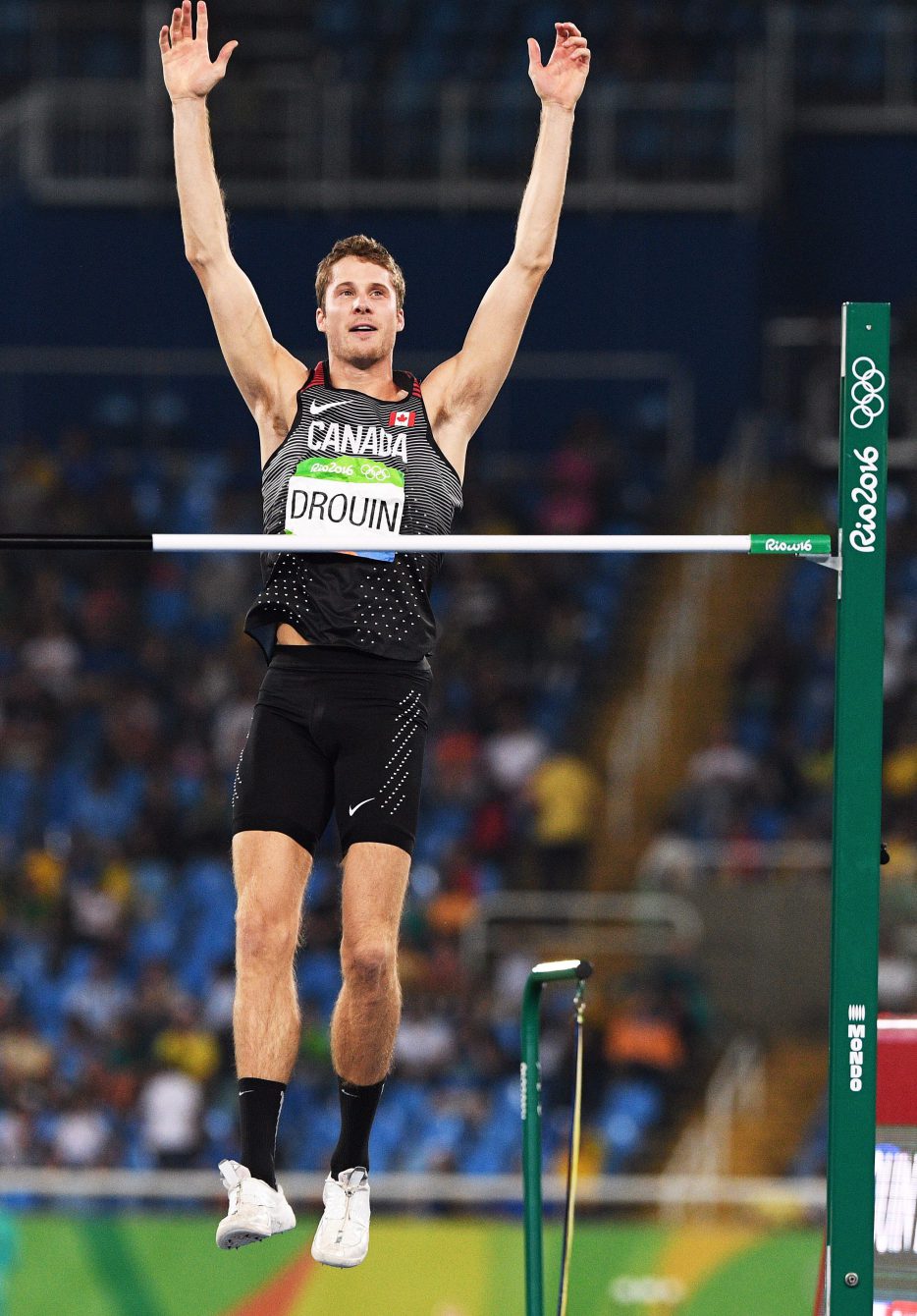 Throughout the night as he outlasted the competition, Drouin was only worried about the high jump bar, not the distractions in the stadium: from boisterous fans as they celebrated the medal ceremony for Brazil’s pole vault champion Thiago Braz da Silva, to the many races around which high jumpers had to navigate on the track.

“That’s always been one of my strengths. I kind of thrive in a situation like this, where there’s a lot going on and I can just focus on the bar, essentially. So I don’t really sense a whole lot of distractions, so obviously it worked out really well.” 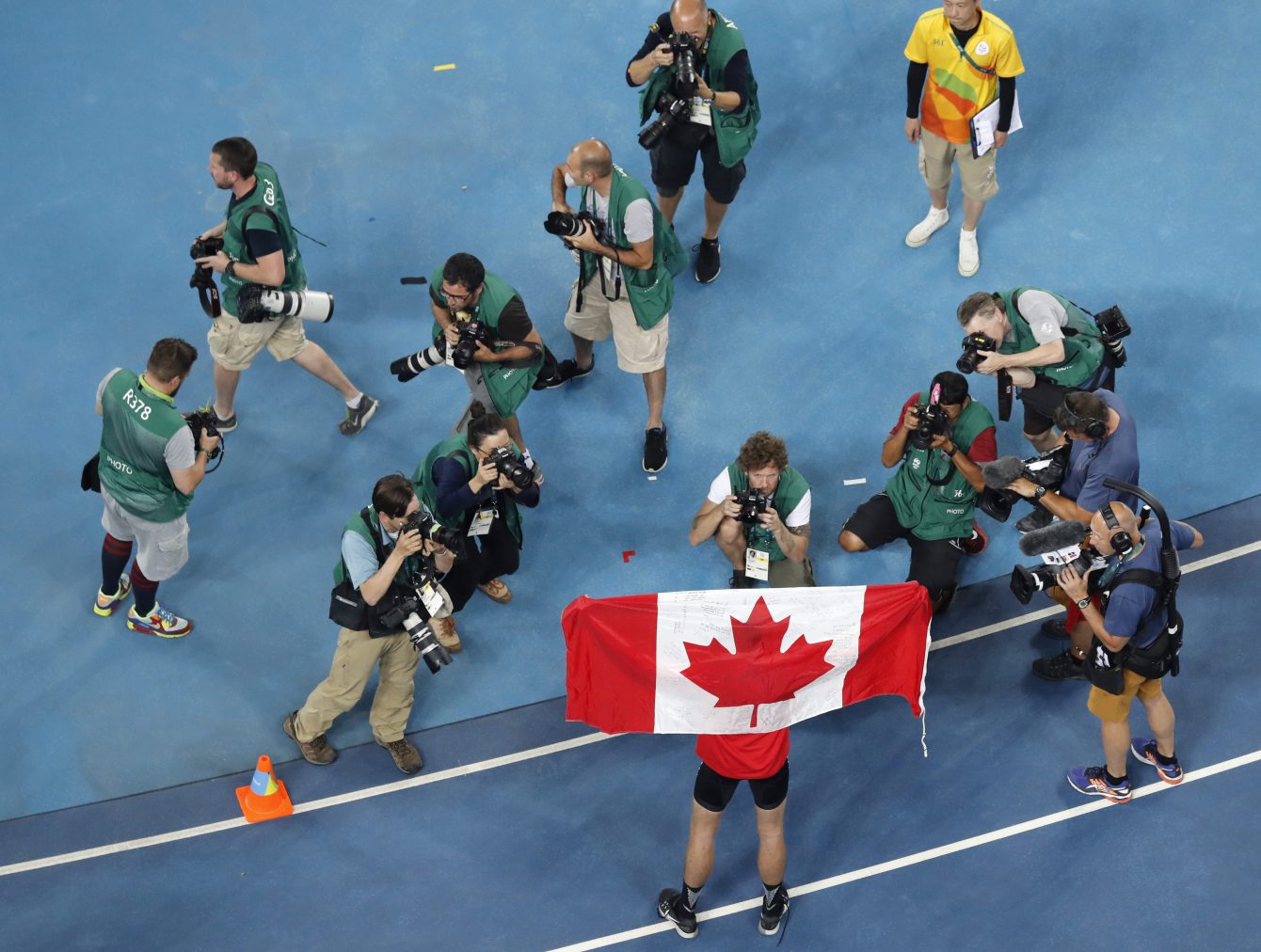 Canada’s Derek Drouin poses for pictures after winning the gold medal in the high jump finals during the athletics competitions of the 2016 Summer Olympics at the Olympic stadium in Rio de Janeiro, Brazil, Tuesday, Aug. 16, 2016. (AP Photo/Morry Gash)

One very important group Drouin didn’t block out watched him win Canada’s first Olympic gold in high jump since Duncan McNaughton did it 84 years ago at Los Angeles 1932.

“My whole immediate family was here, some very close friends, my roommate from school, my best friend. So, to be able to accomplish something like this, with all of them here was just unbelievable.”

Family and friends weren’t the only taste of home accompanying Drouin in Rio de Janeiro. Many noted the Canadian flag with messages written on it unfurled by the champion during his lap of honour around Olympic Stadium. It reprised memories from London 2012. 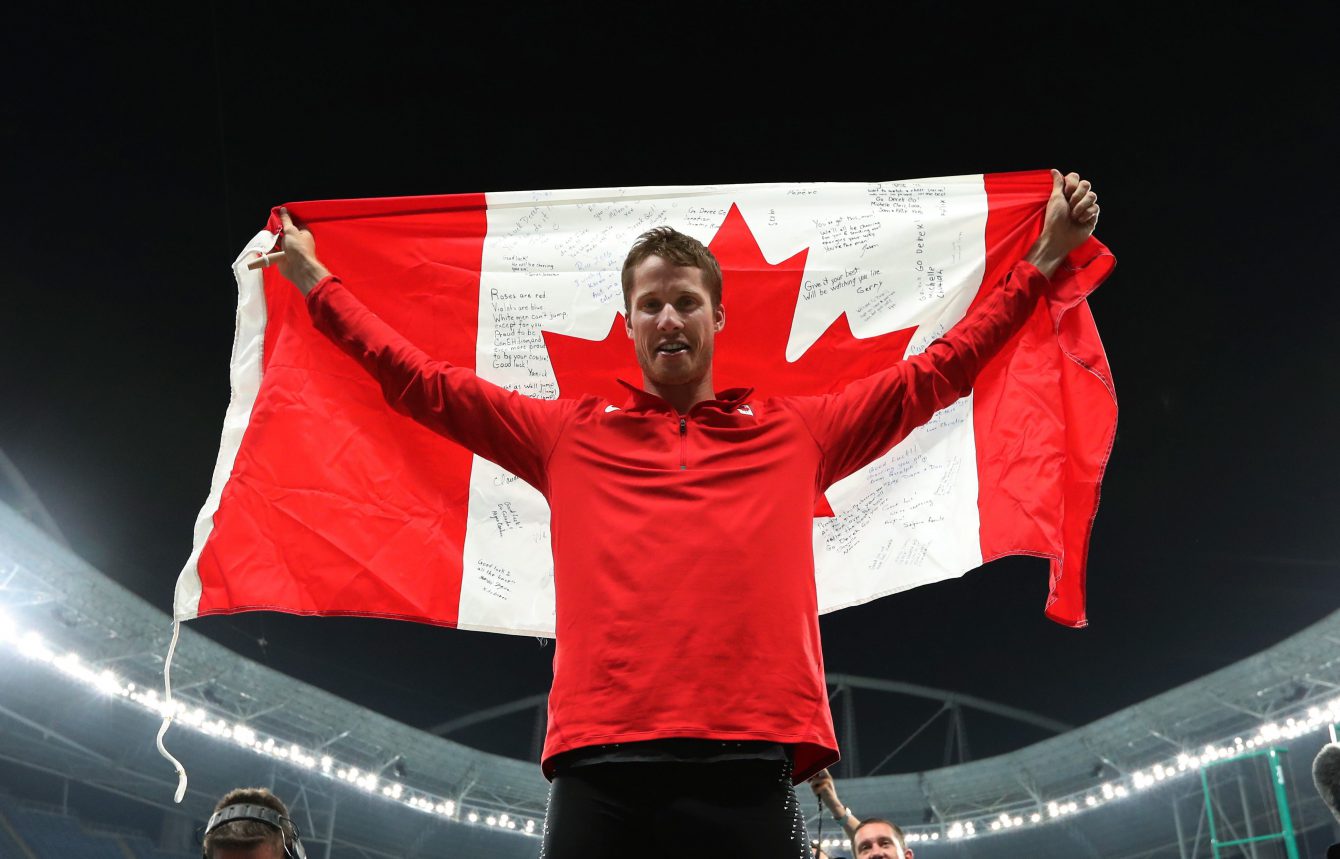 Canada’s Derek Drouin celebrates after winning the gold medal in the men’s high jump during the athletics competitions of the 2016 Summer Olympics at the Olympic stadium in Rio de Janeiro, Brazil, Tuesday, Aug. 16, 2016. (AP Photo/Lee Jin-man)

“Four years ago I had the same thing, from friends and family back home just wishing me good luck and to this day it’s a really cherished possession that I have, it’s awesome.”

For Rio however, Drouin got a brand new flag with latest messages from Corunna, a community of Lambton County in southwest Ontario. The older flag was up in his room for years until he recently moved. The maple leaf from 2012 is still awaiting its place on a wall at his new home, but it will surely now have golden company.

A simple expression of love and support reciprocated with deep appreciation by the coolest customer in Canadian sport.

With report from Camille Wallace.