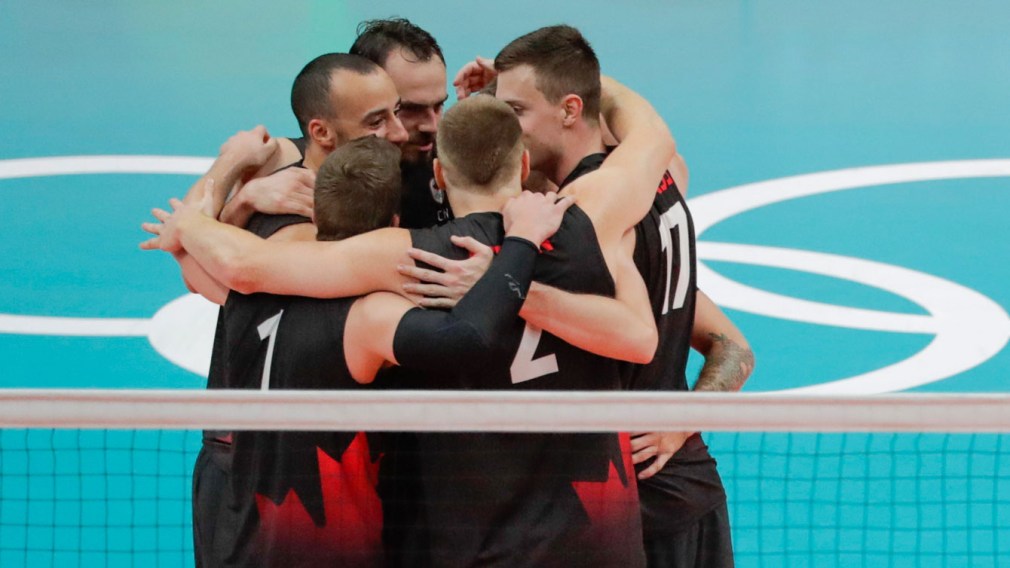 The fairy tale run for the Canadian men’s volleyball team at Maracanãzinho came to an end on Wednesday morning with a straight sets loss to the defending Olympic champions from Russia, 25-15, 25-20, 25-18.

For the upstart Canucks, it was a tough match against a team that has been on the podium at every Olympic Games since Sydney 2000. Canada came to Rio 2016 ranked 12th in the world while Russia sits at number three. 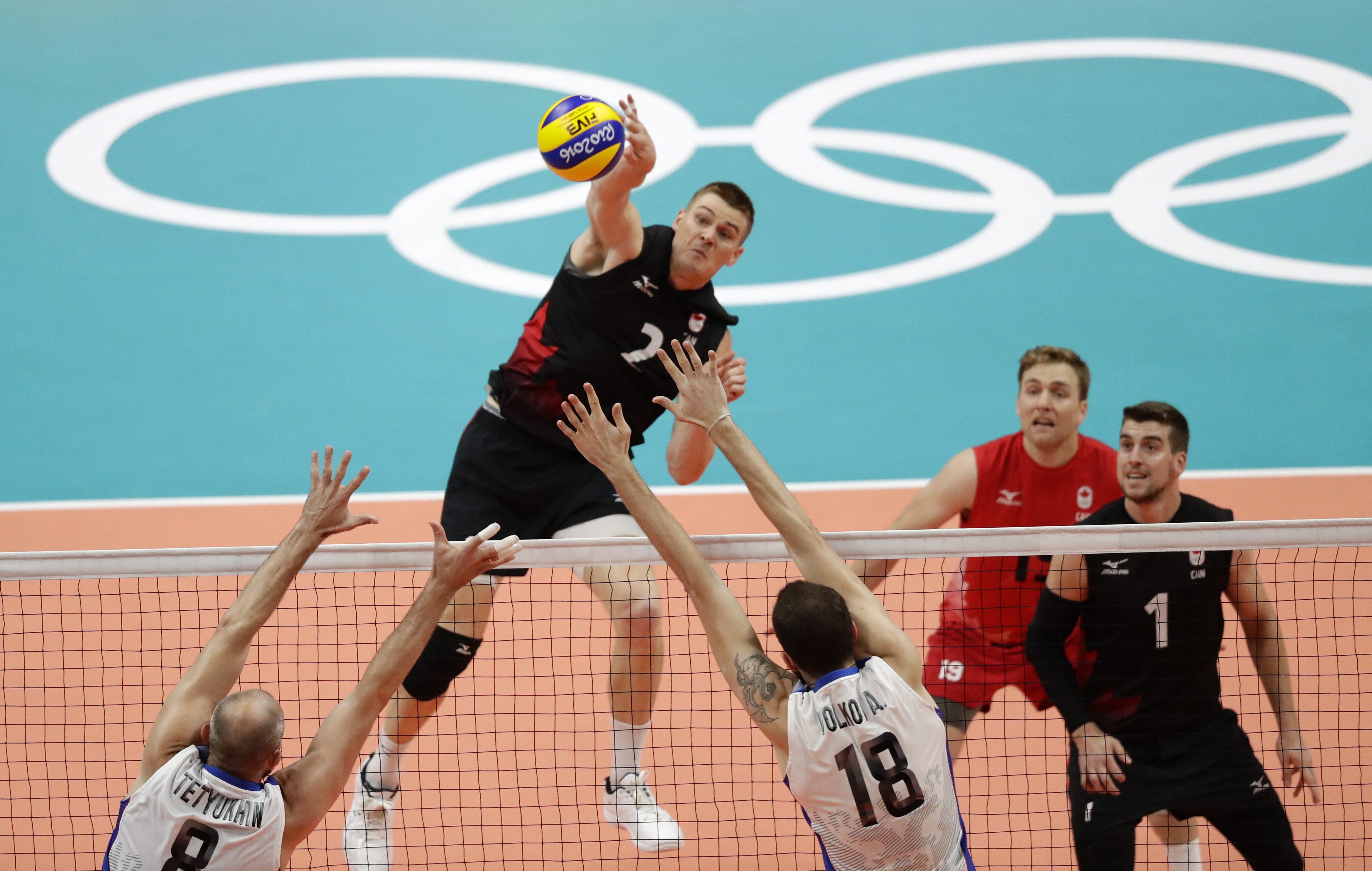 Canada’s John Gordon Perrin goes up for a spike that was blocked in a men’s quarterfinal volleyball match against Russia at the 2016 Summer Olympics in Rio de Janeiro, Brazil, Wednesday, Aug. 17, 2016. (AP Photo/Robert F. Bukaty)

“(Russia has) played in world championship finals and Olympic finals before. We can’t give them an inch because they’ll take a mile. That’s what they did. They played a pretty normal game from their standards,” said Justin Duff. “We were a little bit sloppy, maybe people were nervous. I wasn’t because I was like, ‘Yeah I get to play. I can’t wait to go and hit the ball. I love that’.”

“If you look at the statistics probably we just made way too many errors – serving, attacking, net faults, ball handling, over the net, under the net – pretty much got called for everything. It’s so hard to compete when you make that many mistakes,” said captain Frederic Winters.

“The guys lack patience – it’s a problem with this team,” said head coach Glenn Hoag. “We need to learn from that and look at Tokyo (2020) now. Part of the group is fairly young so we have a good base to build on.” 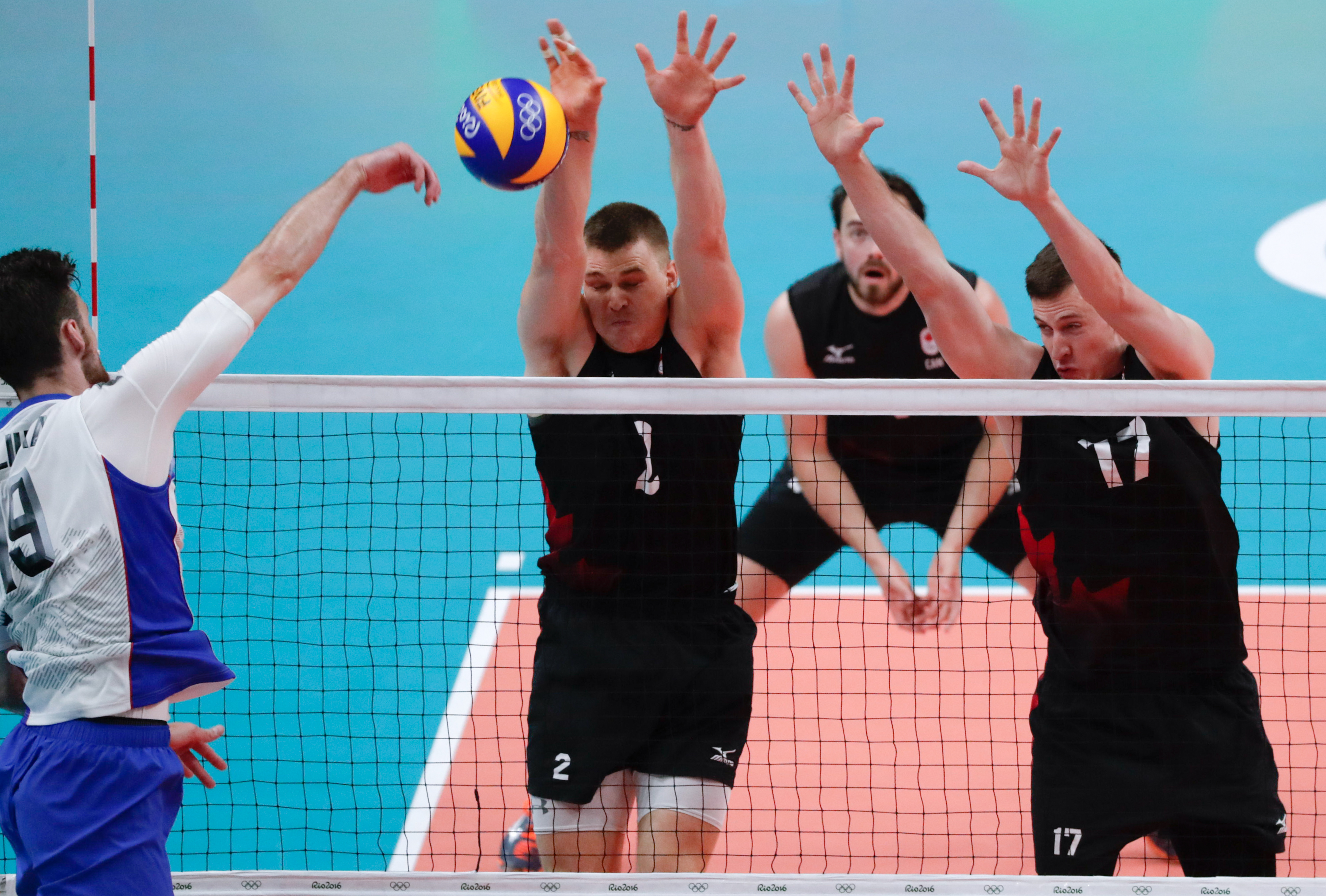 Gavin Schmitt ended the tournament as Canada’s leading scorer with 73 points while Nick Hoag was the team’s top spiker with a 30 per cent efficiency. Graham Vigrass was Canada’s best blocker.

It had been a remarkable achievement for the team to even get to Rio. After missing out on the opportunity to qualify on home court in Edmonton in January, the team travelled to Tokyo in June to compete in the final global qualification tournament. They came away with Canada’s first Olympic berth in men’s volleyball since Barcelona 1992.

Once on the ground, Canada got off to an impressive start, defeating the 2015 FIVB World Cup champions from the United States in three straight sets in their opening match. After losses to Brazil and France, the Canadians rebounded with a straight sets win over Mexico and then a four set victory over Italy, the runners-up in the 2015 FIVB World Cup. Canada closed the round robin portion of the tournament with a three and two record, good enough for second place in their pool. That set up the quarterfinal meeting with Russia, who had been ranked third in the other pool, but with four wins and one loss. 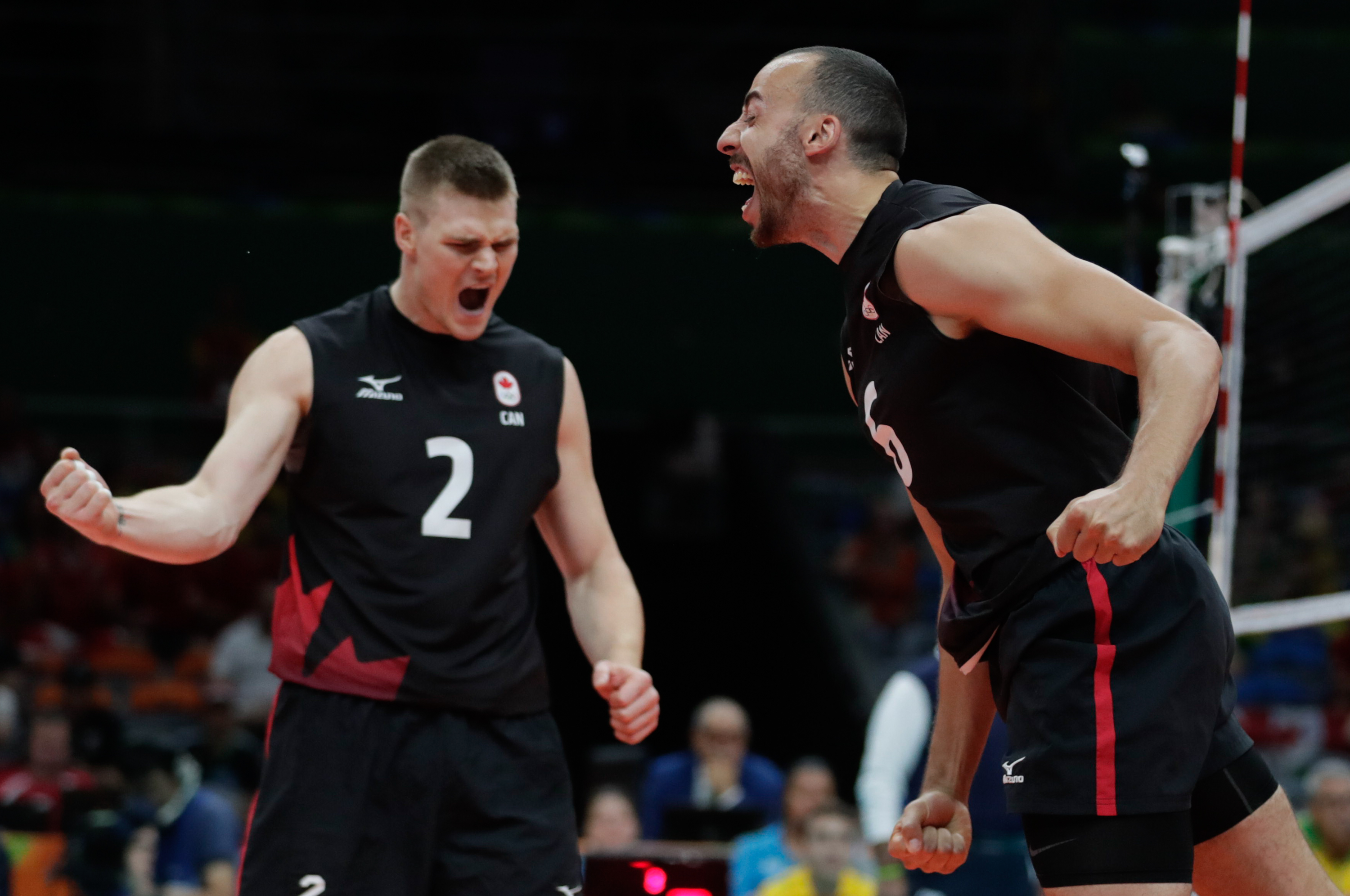 By advancing to the quarterfinals, Canada finishes the Olympic tournament in a tie for fifth. That is Canada’s second best finish ever in men’s volleyball behind the fourth place result at the boycotted Los Angeles 1984 Games. In Canada’s only other Olympic appearances, the teams finished ninth at Montreal 1976 and 10th at Barcelona 1992.

When Duff was asked whether the loss would be easier to take by virtue of making it as far as they did, Duff responded: “I think so. That’s at least what we’ll tell people.”

He also noted that he hoped their run would inspire of future generation of players. 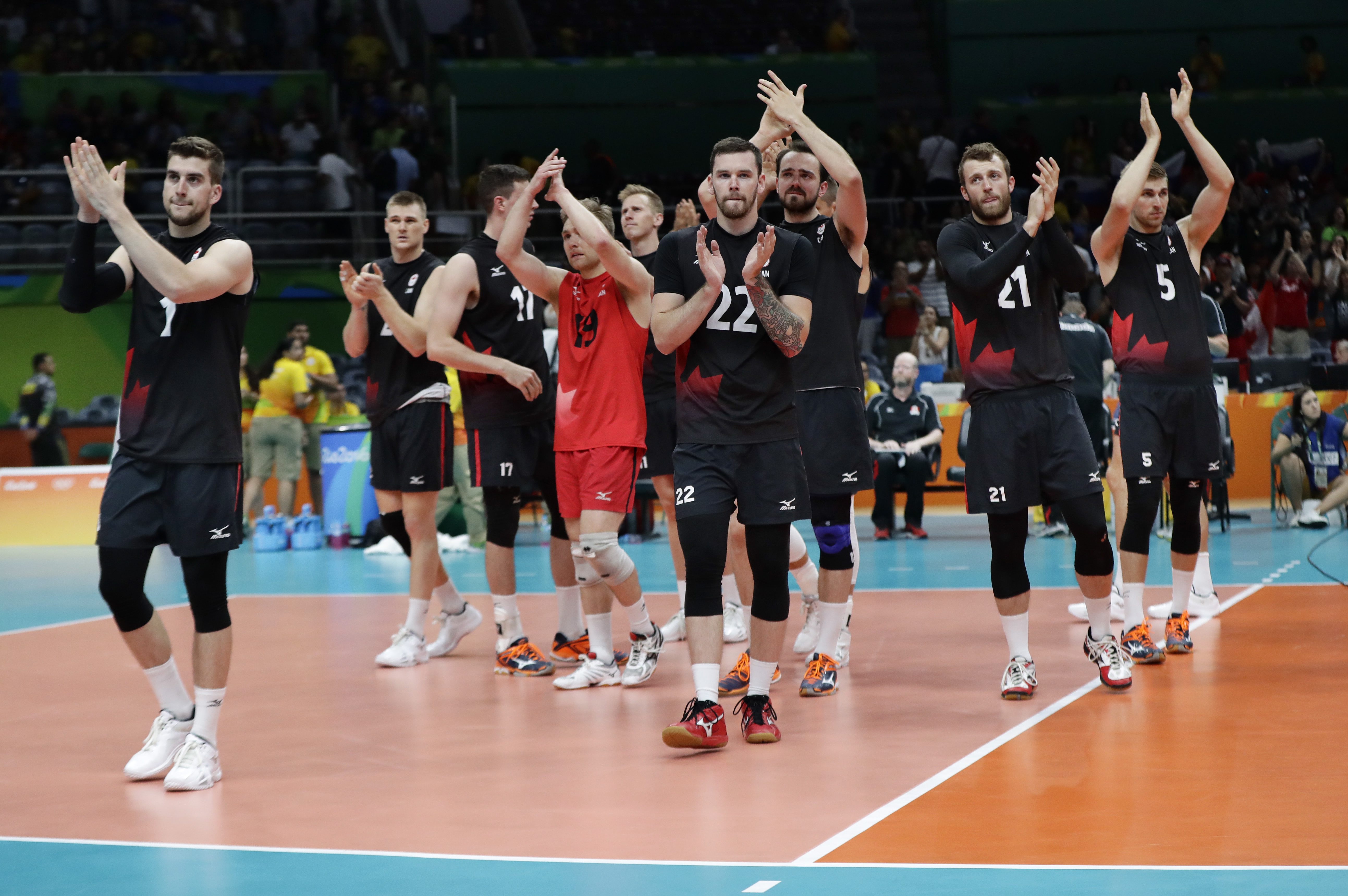 “One of our biggest goals is to raise awareness of (volleyball) and to show that we have high-level professional volleyball players in Canada,” said Duff. “It helps other players aspire to play on the national team or to play professionally or to make a living out of it.”

From the court to the sand, Volleyball Canada also enjoyed a historic beach run, with four teams qualified for the first time, three of which reached the playoffs.

The top Canadian beach volleyball finish in Rio 2016 came from Sarah Pavan and Heather Bansley, who were fifth.

Quarterfinals the end of the line for Canada’s thrilling run in volleyball
Ana Padurariu: Facing the never-ending challenges of 2020
What is the difference between racquetball and squash?
Shuttlecock and balls: The fastest moving objects in sport
Team Canada Athletes Train at Home
Getting vertical: The highest jumps in sport