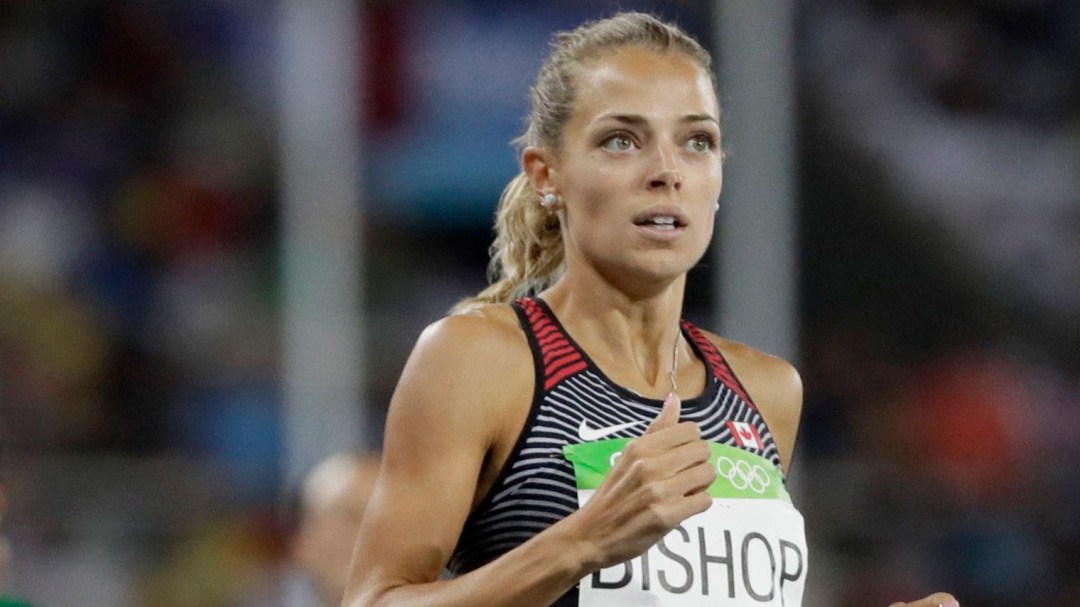 On the last night at Olympic Stadium for athletics, Canada saw a heart wrenching three fourth place finishes, despite its runners completely emptying the tank for historic national bests.

In the women’s 800 metres and 4x400m relays, Canada showed up and did well, but was just shy of the Olympic podium, which was also the case in the men’s 5000m. 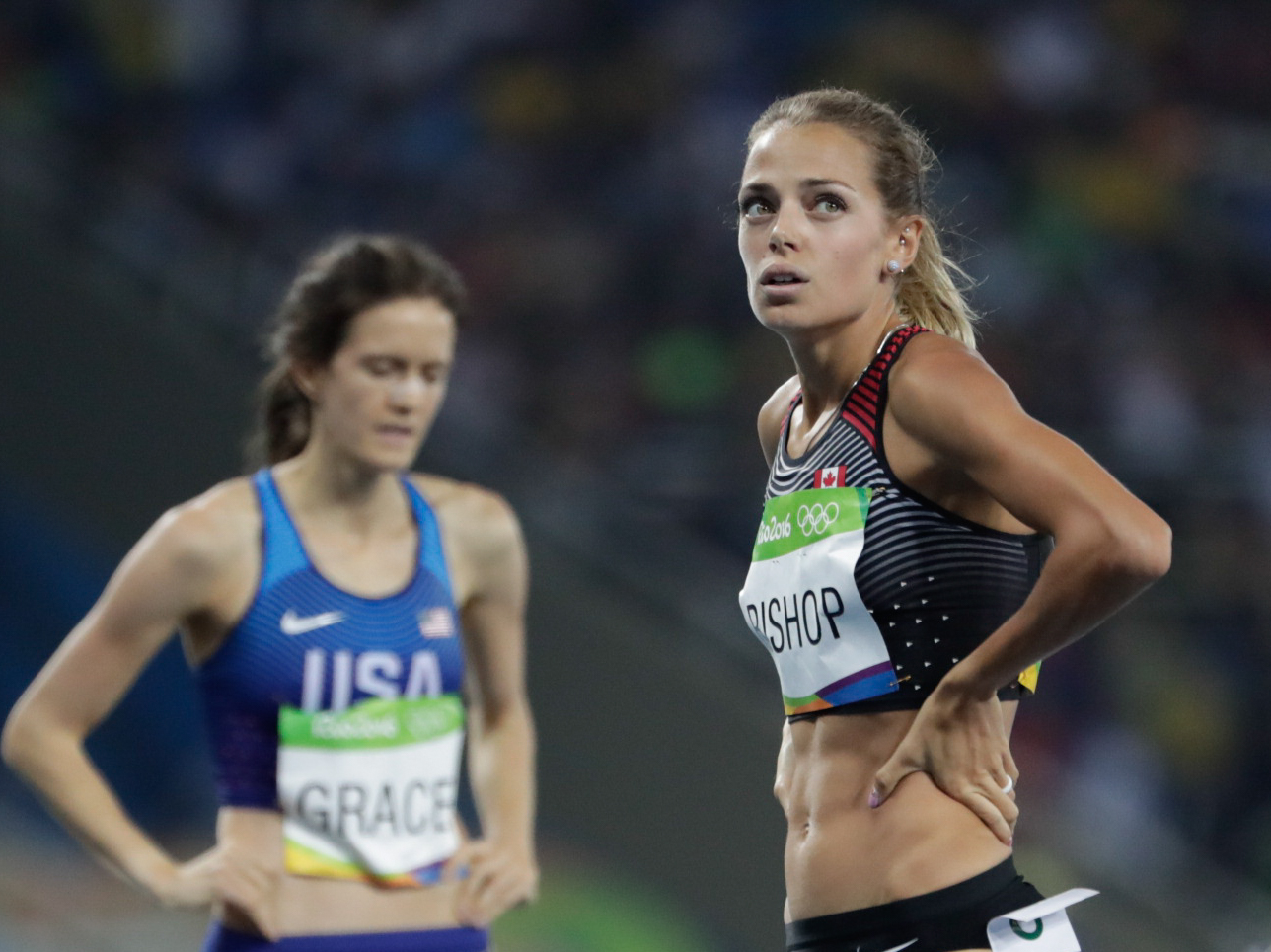 World silver medallist Melissa Bishop set a new Canadian record, finishing the women’s 800m in one minute, 57.02 seconds. In the process, she beat the competitor – Maryna Arzamasava of Belarus – who edged her for gold at the world championships in Beijing last year.

That however, wasn’t enough as Caster Semenya of South Africa ran away with the field in 1:55.28, followed by Francine Niyonsaba of Burundi (1:56.49), with Margaret Wambui of Kenya (1:56.89) outkicking Bishop in the final 50 metres to narrowly take the bronze by 0.13 seconds. The race isn’t without controversy, as highlighted in The Guardian, something Bishop refrained from discussing in a difficult post-race interview.

Unquestionably proud of this teammate&friend. Grateful to share #rio2016 #olympics experience with her! #TeamCanada

“The plan was to stick with the lead and try to respond as smoothly as possible. So we did what we could,” Bishop told reporters.

“This race, it’s all going to come down to the last 50 metres. So much opens up there. So it was to be expected that everybody would be there, I just didn’t think it was going to turn out like that.”

Known for her explosive finish down the home straight, Bishop broke her own national record by 0.41 seconds, though that was cold comfort on this night.

“Defeated, obviously,” she said afterward. “We work so hard for this stuff, fourth really sucks.” 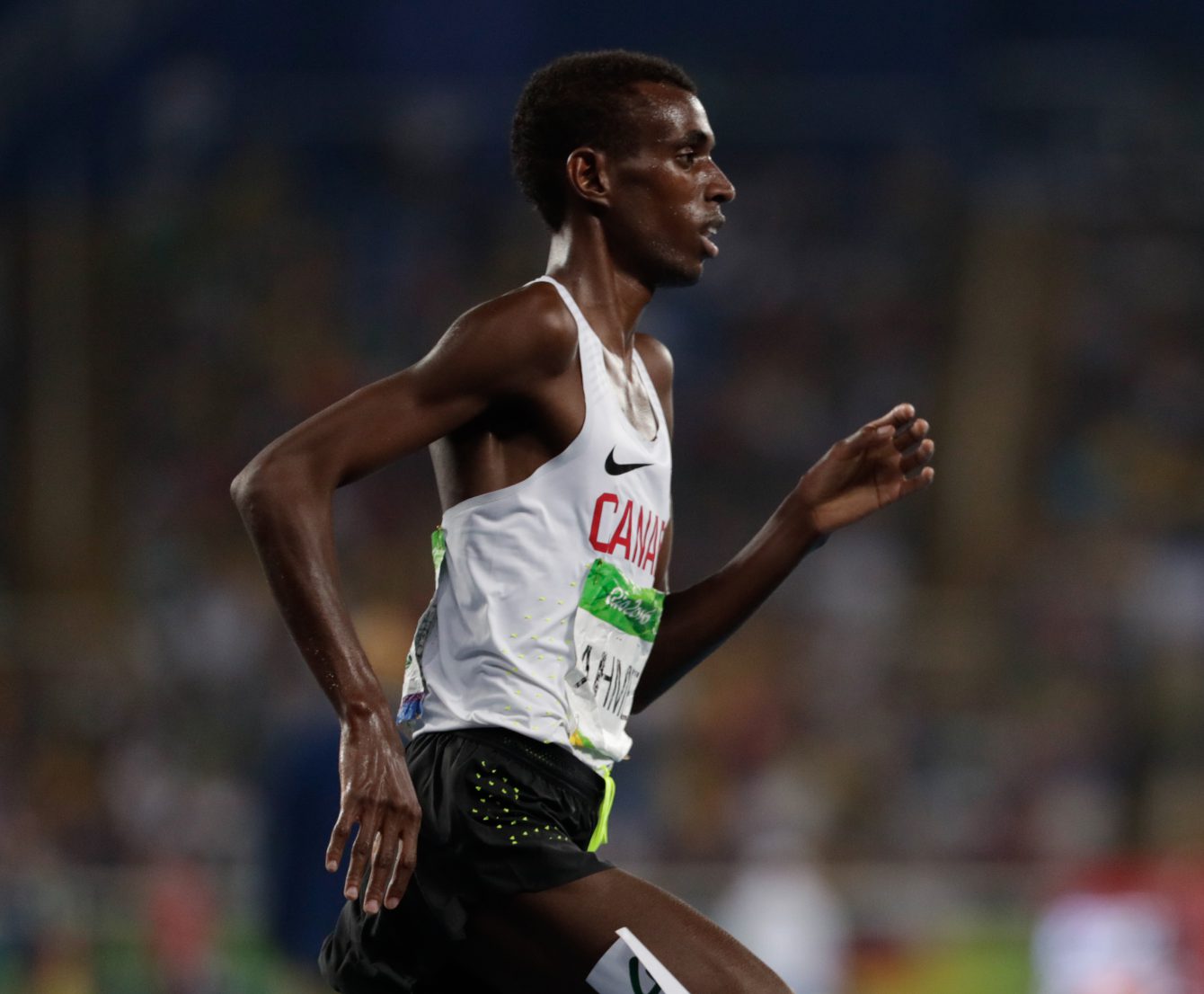 Unfortunately Bishop’s heartbreak would precede two others on the evening at Engenhao – the nickname for the Olympic Stadium – as more controversy followed in the men’s 5000m.

On the night of Great Britain’s Mo Farah’s coronation as a two-time double Olympic champion in the 5000m/10000m distances, Canada’s own Mo – Mohammed Ahmed – decided to go with the big names for a shot at the medal. He nearly delivered.

A mad dash in the final lap saw Farah try to defend his Olympic title against two Ethiopians, a pair of Americans, and incredibly, a Canadian. 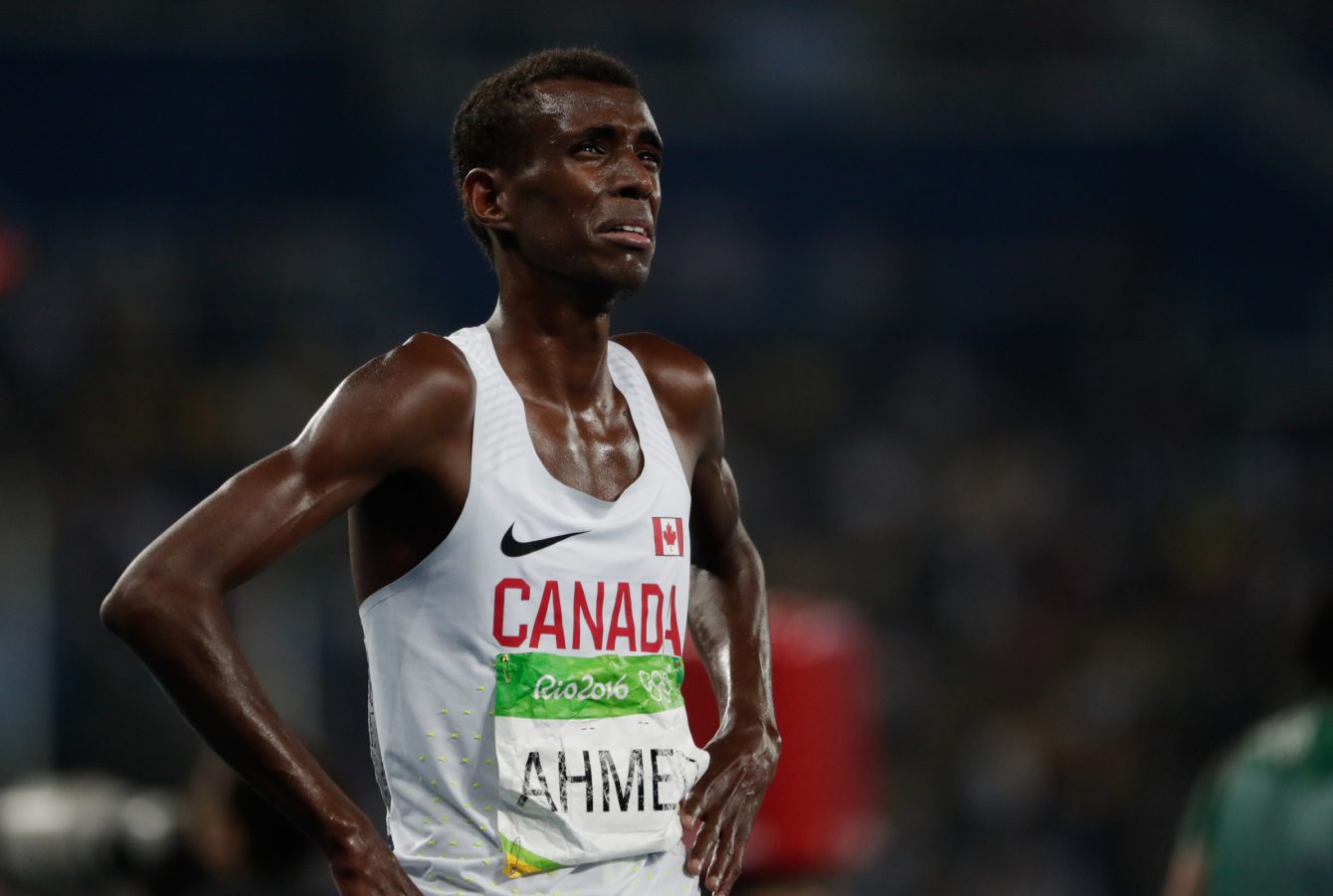 Ahmed was then disqualified with two other runners including Chelmo, but both of their decisions were reversed, with only Edris Muktar of Ethiopia (who had finished fourth) remaining in the DQ column, bumping the Canadian up in his place.

Fourth is the best finish by a Canadian in the Olympic 5000m in the nation’s athletics history.

“I’ve had better races at a major championship, you know. Yeah I guess this is the best finish that I’ve had,” Ahmed said as he referenced his national record.

“I’ve been competing with these guys the last year and my (13:01.74 Canadian record) really showed that I belonged and tonight I showed that I was one of the top guys in the 5k.”

“I was disappointed with my finish obviously, the podium was right there, but you know that was agonizing – not finishing on the podium.” 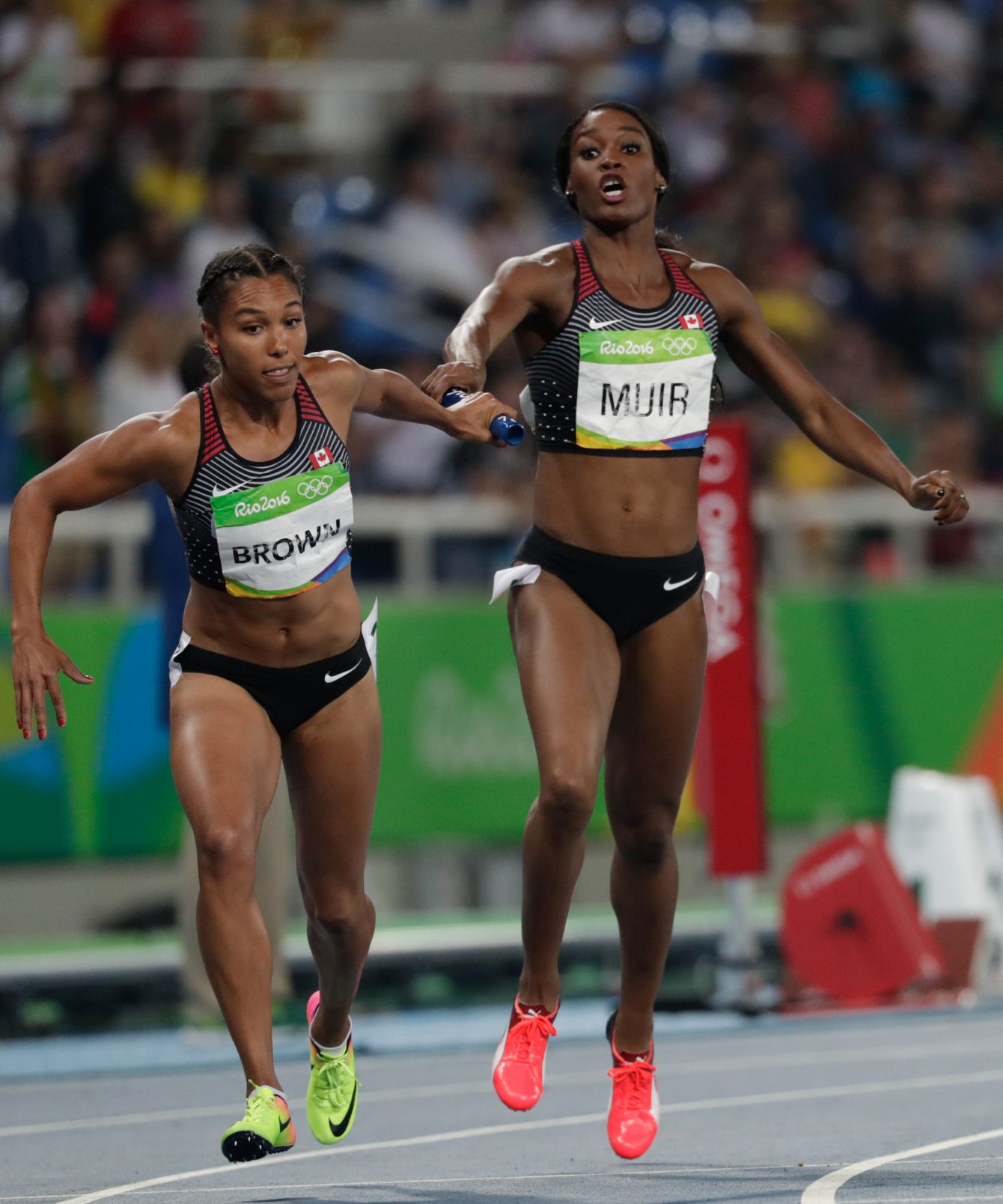 It’s rare to see Canada field a team in the 4x400m finals on the last night of athletics at an Olympic Stadium. It’s even less common to see a Canadian team fighting for a 4x400m Olympic medal, yet that’s exactly what four women from Canada did on Saturday night in Rio.

Carline Muir, Alicia Brown, Noelle Montcalm and Sage Watson were just about half a second off the pace for an Olympic medal, which would’ve been Canada’s first in the 4x400m since Los Angeles 1984.

With the United States and Jamaica well out in front by the third leg as the race played out, a showdown between Great Britain and Canada emerged for bronze. At the finish, the Brits with a 3:25.88 got on the podium ahead of Canada’s 3:26.43. 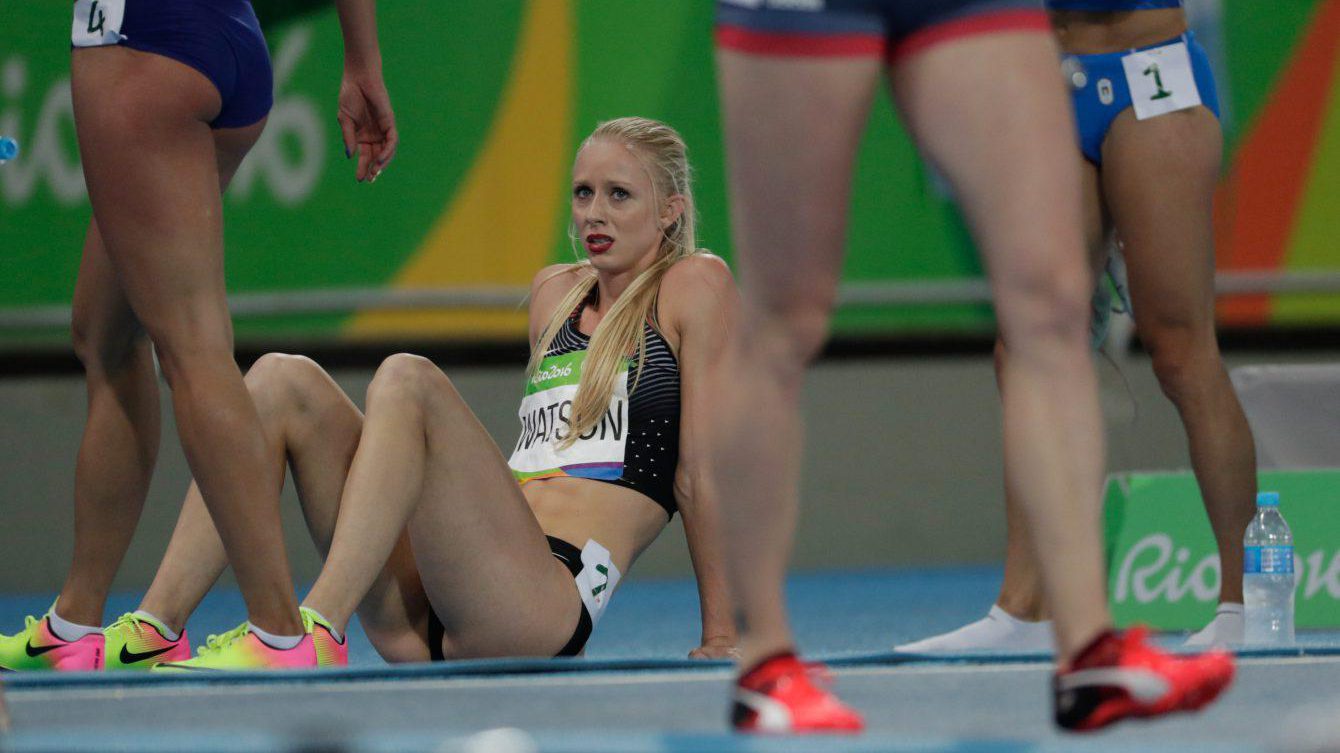 “It’s an emotional roller coaster for us right now,” lead runner Muir said in her post-race interview. “We went out there and ran our hearts out and came up a little too short, but I couldn’t be more proud of these girls and what they did today.”

She also had a message for Team Canada fans who followed the Olympic Games closely for the last two weeks.

“Thank you, for all the support, it’s been amazing, the tweets and what not, it gives us strength and it’s really special.”

Despite Saturday’s disappointment, Canada finished the Games with a gold, silver and four bronze medals in Athletics, its best athletics total medal haul since Los Angeles 1932 when the country won nine medals.

In Rio, a gold was won by Derek Drouin in high jump.