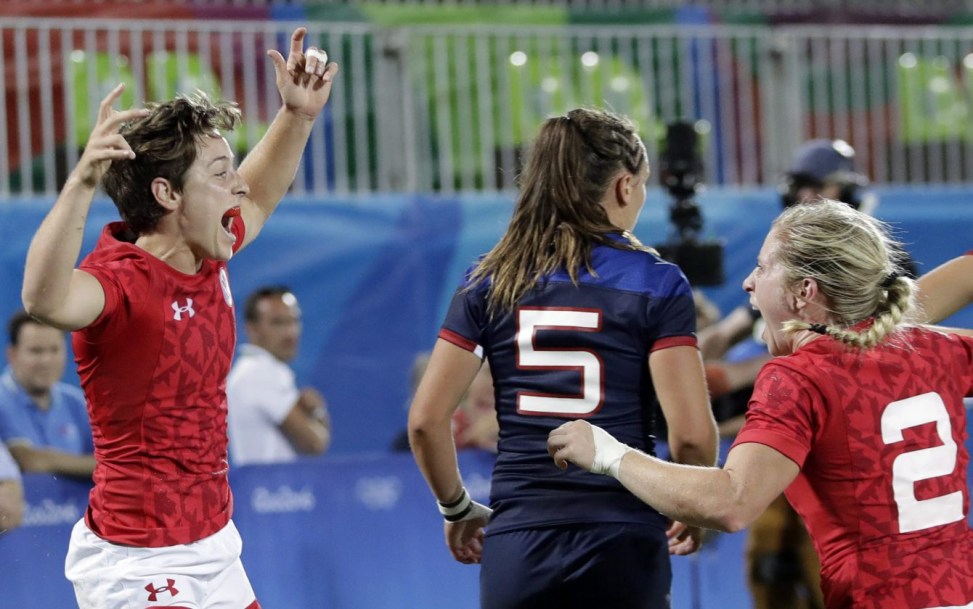 Comfortable with the uncomfortable: lessons from an Olympic rugby player

It has been two months since our historic bronze medal rugby sevens game at the Olympics in Rio de Janeiro, and this will forever be a highlight of my life. We received so much support from family, friends, fans (new and old) and strangers after that game and since we’ve been home. 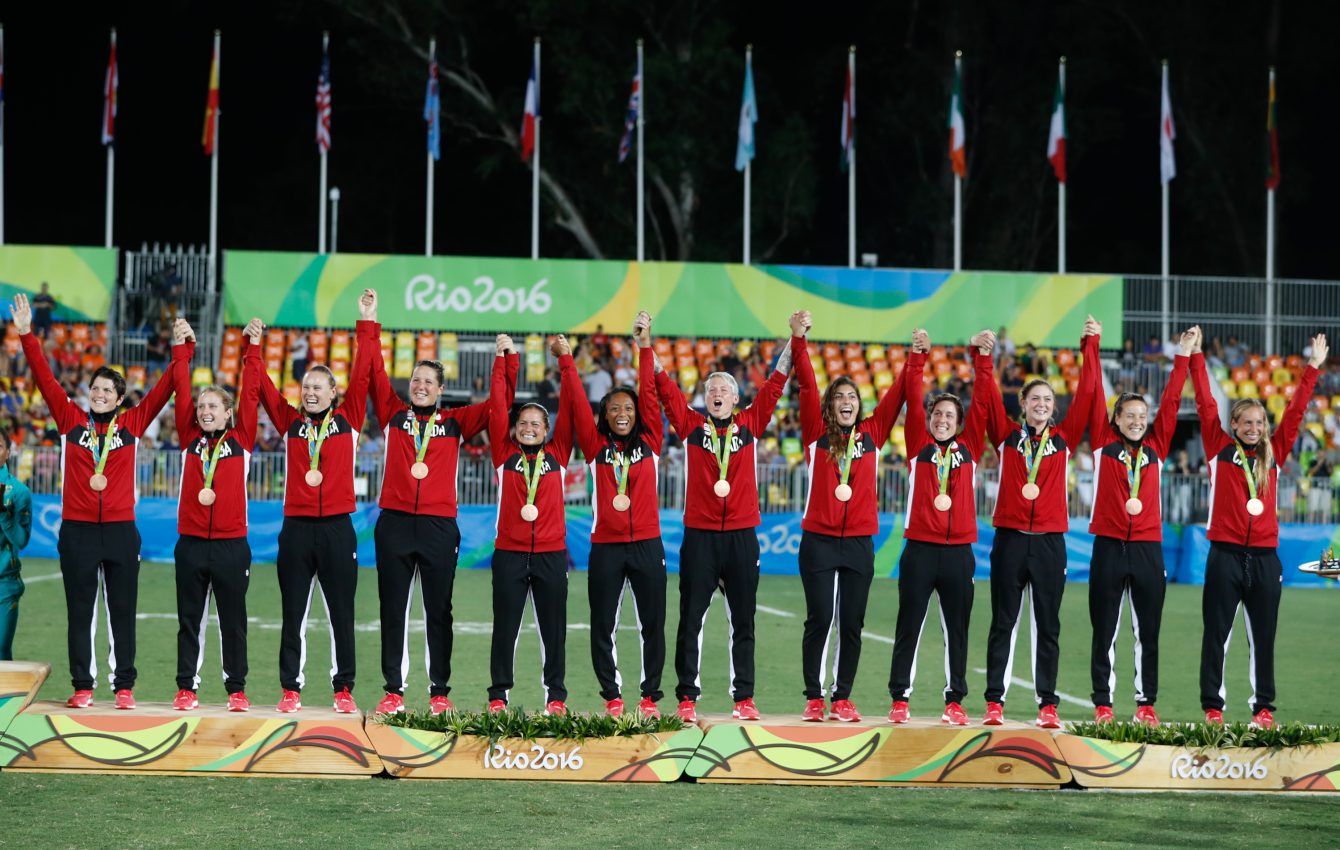 But what has stuck with me the most is one question; “How did you come back to beat Great Britain so convincingly, after losing to them the day before and having to play a few hours after losing your semi final game?”

To an outsider, winning under these circumstances seemed improbable, evident by the number of times I’ve been asked this question. But for me, preparing for that game was a familiar feeling. The challenge and the pressure are what fuel me as an athlete. We train to be resilient in these situations, but that does not guarantee we will be when it matters most.

RELATED: Get to know Ghislaine Landry

I will not pretend that the two hours we had to get ready for our bronze medal game were easy – they were not. The walk back to the change room after our semifinal felt extra long; inside the room there were tears, and there was silence. Early in my career, I told myself to learn to be comfortable being uncomfortable. So while it was familiar, it was also uncomfortable. My personal physical response was nausea (controlled breathing exercises are a regular part of my game preparation to counterbalance this). 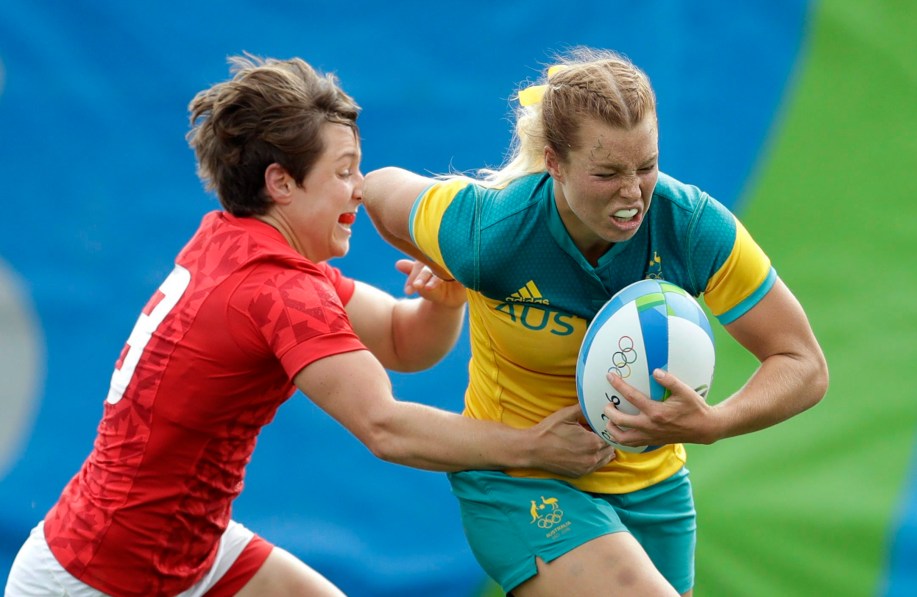 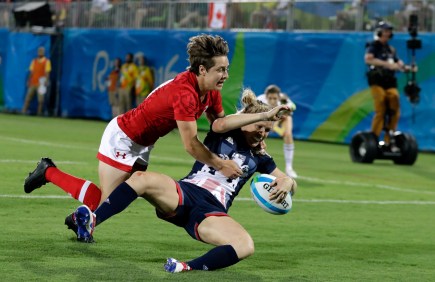 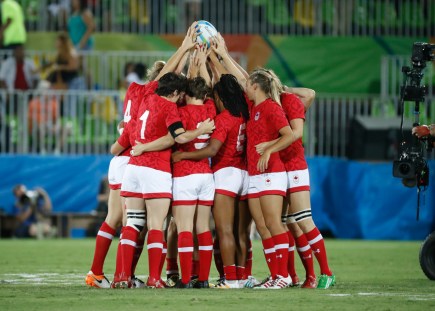 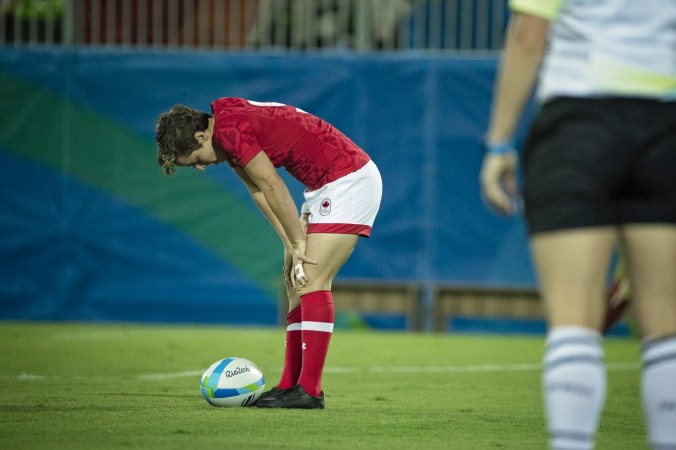 Ghislaine Landry takes a moment to collect herself before kicking off during a match at Rio 2016 (Photo: Paige Stewart). 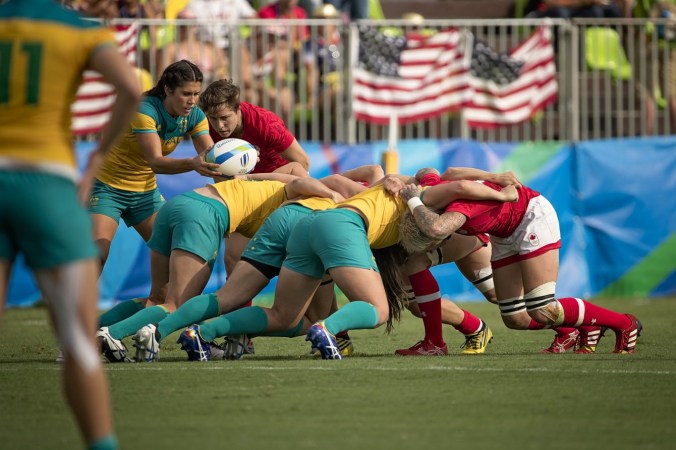 We all had to cope with losing a gold medal in our own way, but now there was a new goal and we had two hours to rise up to that. It is in these uncomfortable moments when we see our true selves, good and bad. It is in these moments that we have the opportunity to be great.

In sport, we face challenges everyday; fatigue, injury, motivation, mental willingness – or playing for a bronze medal at the Olympic Games two hours after losing a semifinal and against a team that beat us handily only 24 hours earlier. In life it is no different, whether it be financial struggles or work related, relationships with friends or family, personal loss or broken promises; we have to overcome those challenges if we want to find success. 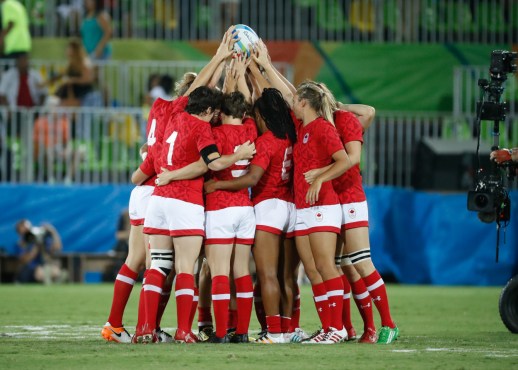 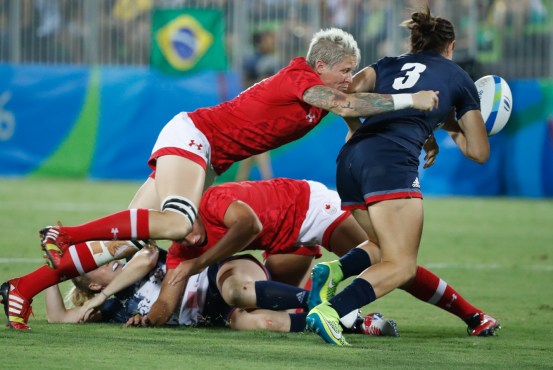 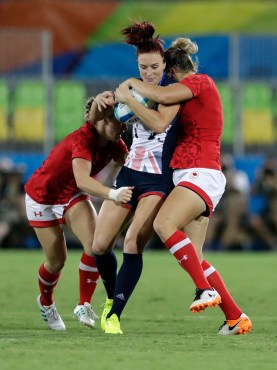 So, my answer to that question I’ve heard so many times: we did what we do every day.

Our challenge was unique, but the process was the same. We had the mental fortitude to accept what lay ahead of us, we believed in ourselves and each other, we trusted in all of our preparation, and we walked towards the challenge. This was our chance to be great. 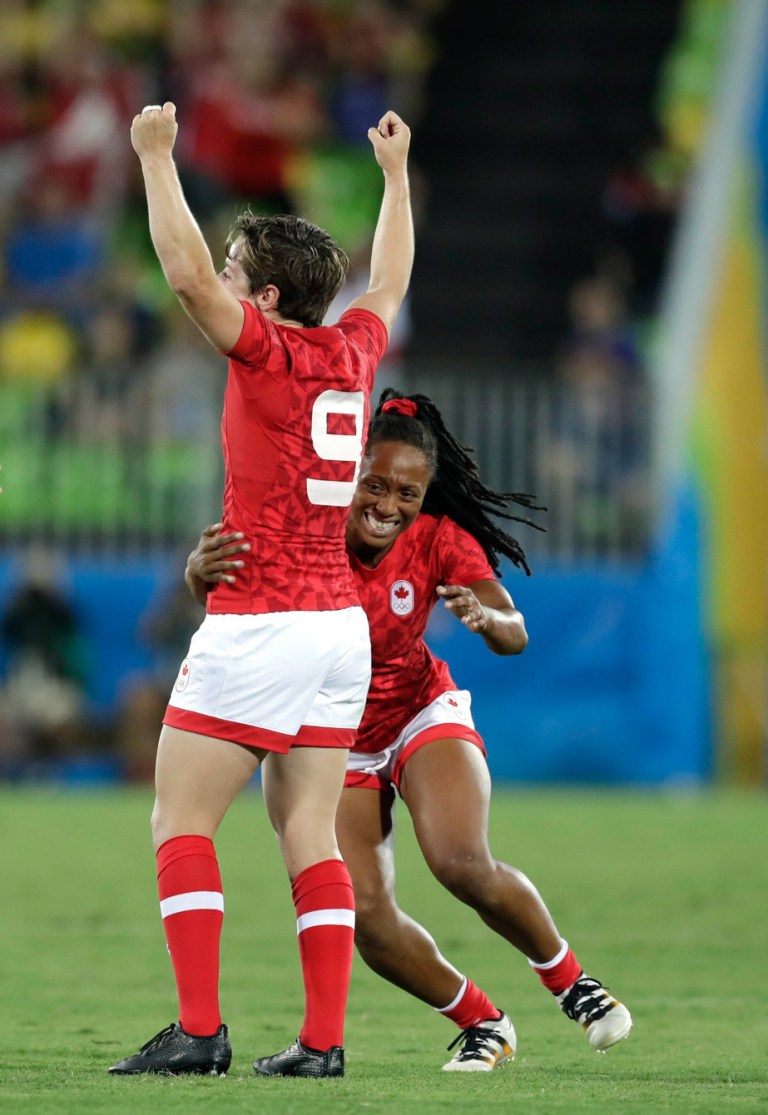 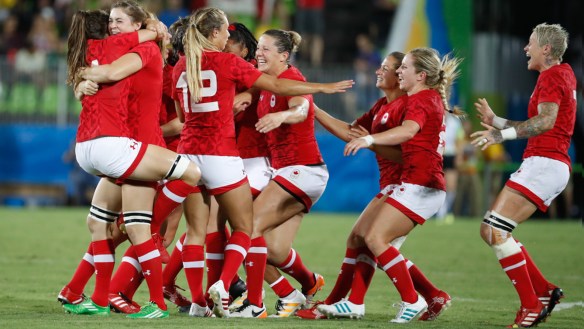 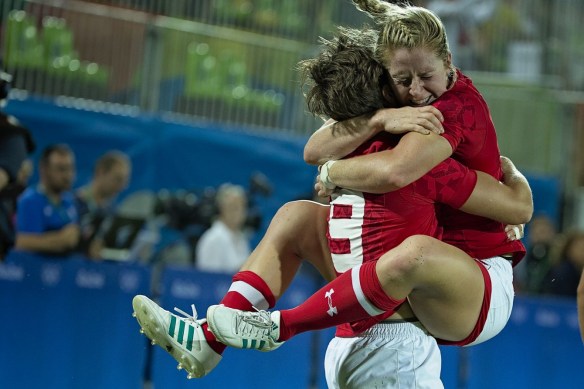 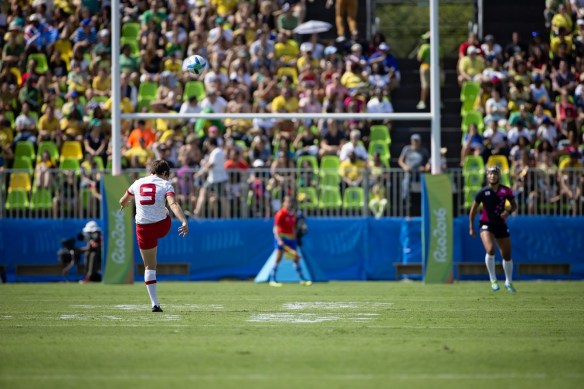 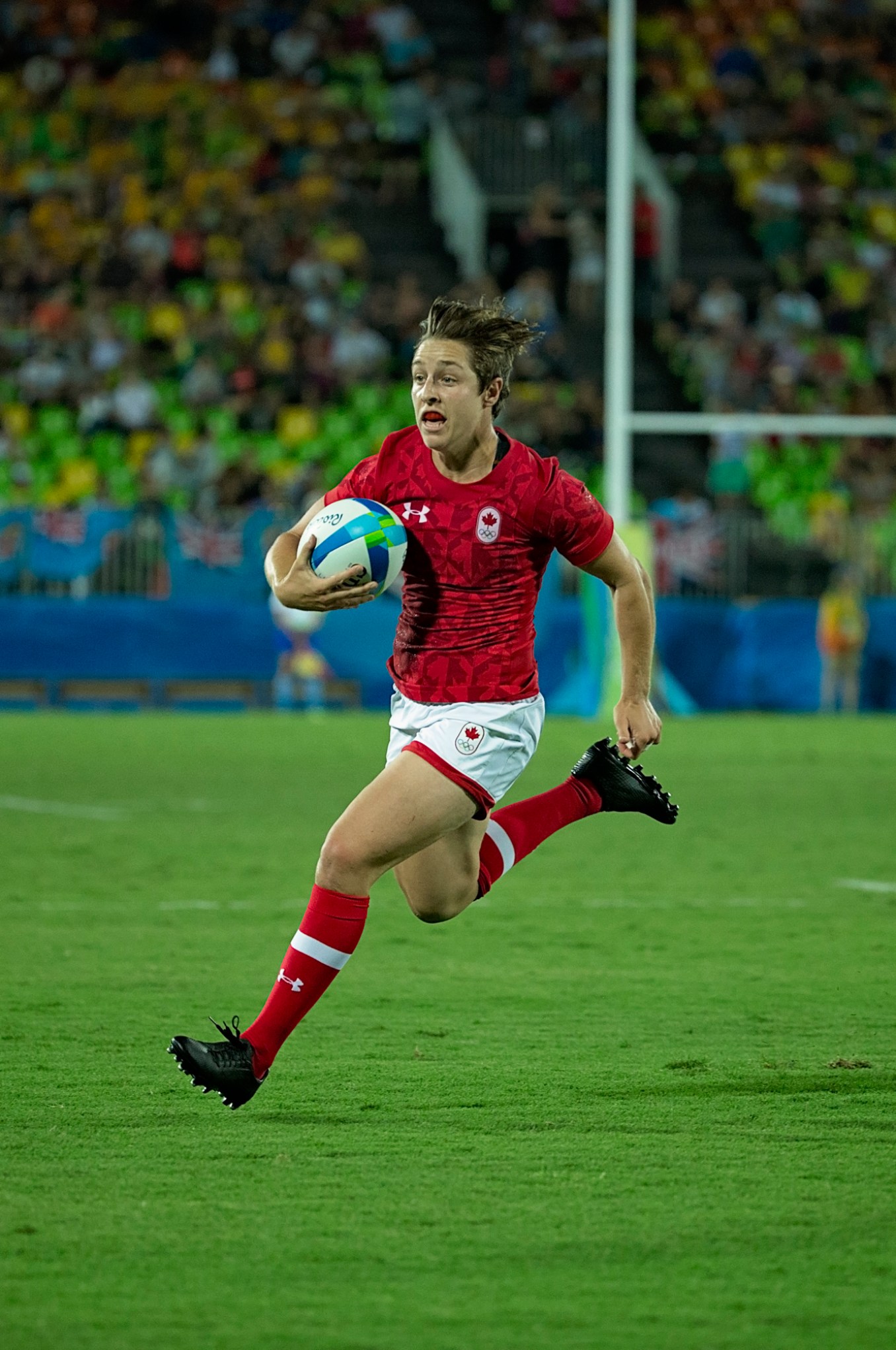 As athletes, these are often the moments that define whether we are successful or not. As human beings, these moments not only determine our success but also our happiness. Over the years, I have adopted this attitude in my every day life. We have to learn how to handle disappointment and rise to victory, whatever that may be.

The next time you face a challenge, no matter how big or small, accept it, walk towards it and be great.