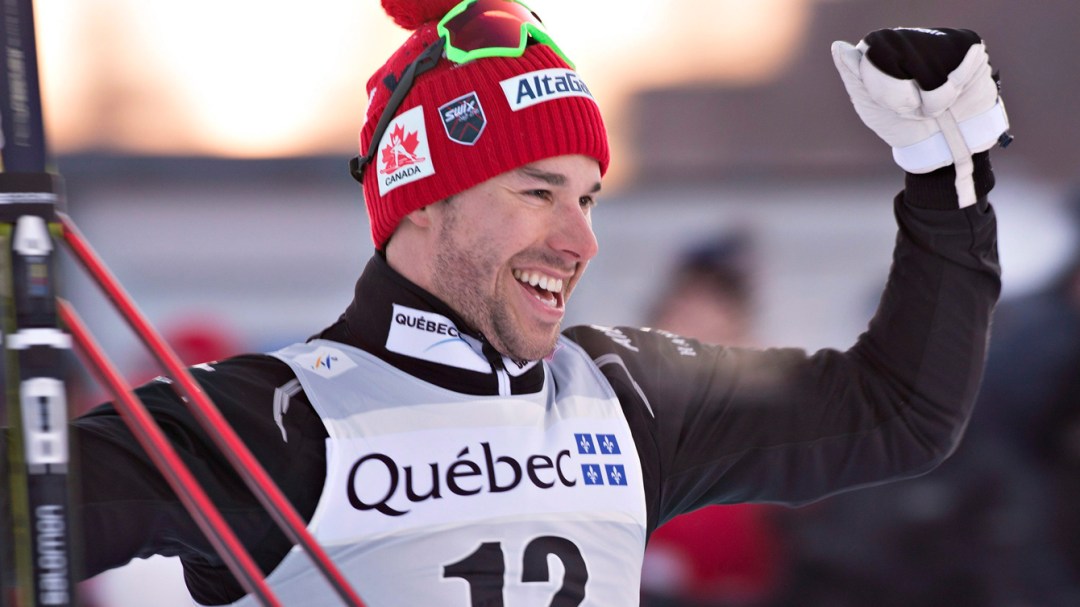 Less than a year and a half to the start of PyeongChang 2018, it’s time to get primed on some of the truly traditional winter sports.

Our fifth and final season lookahead tells you all you need to know about the Nordic sports. 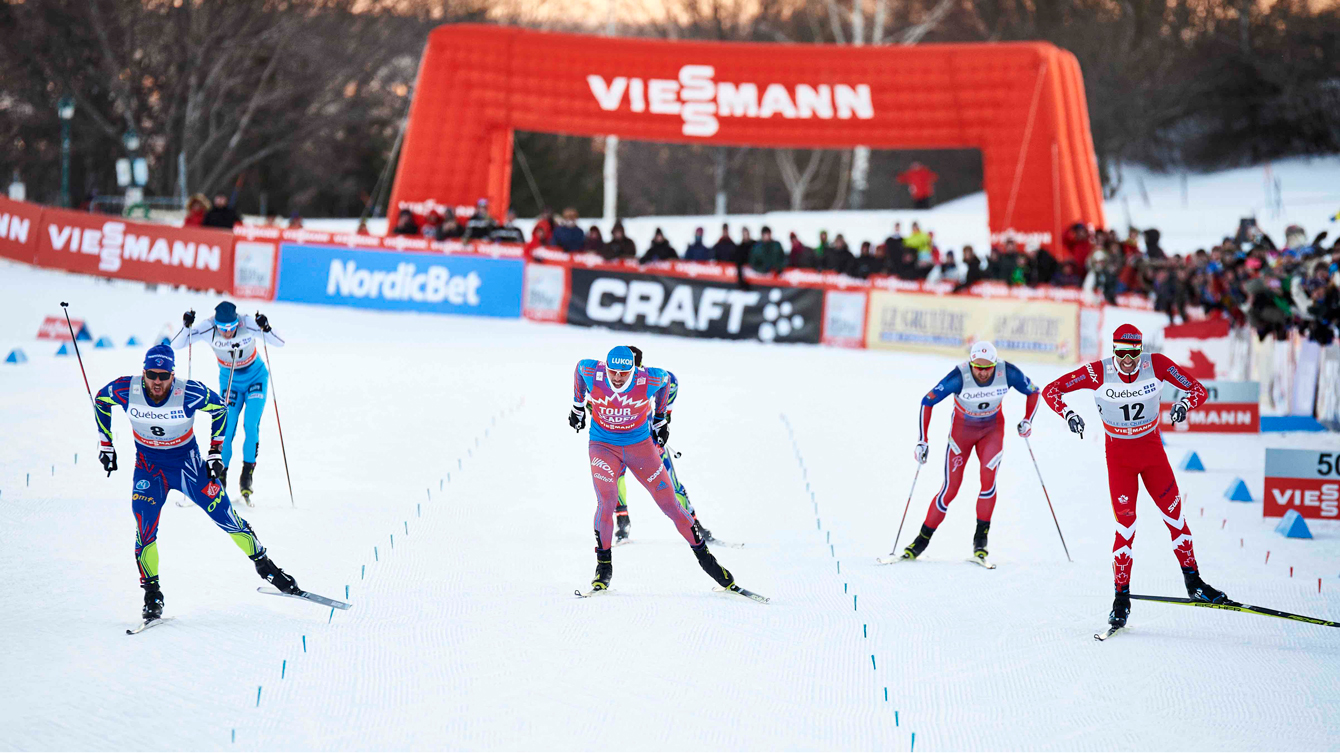 Canada’s cross-country skiers will get their season started very soon with national sprint selection races on the Frozen Thunder track in Canmore, which is laid out using snow that was made last winter and stored in a protected location. In mid-November they’ll head out onto the World Cup circuit as the qualification period in which athletes can earn points towards Olympic qualification opens. Final team numbers for PyeongChang will be decided in January 2018.

The core of the men’s World Cup team is the same as last year, with one major exception. Ivan Babikov announced his retirement in June and promptly became the head coach of the national squad, instilling new motivation. Alex Harvey is once again expected to lead the podium charge, coming off two silver medals last season, including one at home in Quebec City. This is also a world championship year and Harvey is looking to stand on the podium there for the fourth straight time, after winning team sprint gold in 2011, sprint bronze in 2013, and a pair of medals in 2015, silver in the sprint and bronze in the skiathlon. 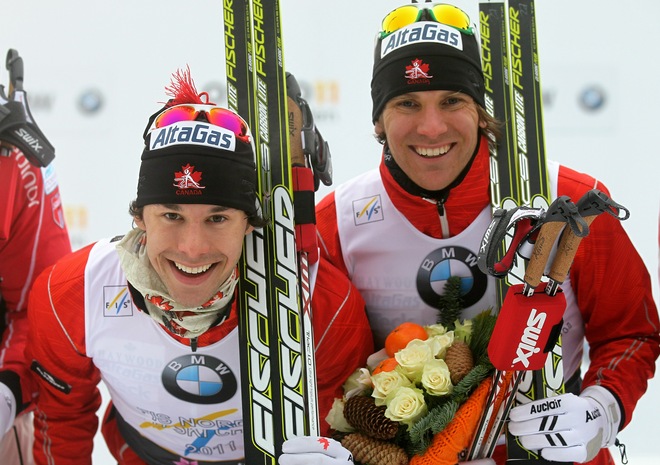 Alex Harvey and Devon Kershaw celebrate winning the gold medal in the team sprint at the FIS Nordic World Ski Championships at Holmenkollen on March 2, 2011 in Oslo, Norway. (Photo by Christof Koepsel/Bongarts/Getty Images)

The longest serving member of the national team, Devon Kershaw, will continue to fill a leadership role as he tries to regain the form that saw him finish second overall in the World Cup standings in 2011-12. Lenny Valjas, who has battled injuries over the last few years, appears to be in great health and great spirits after watching his sister Kristina compete in beach volleyball at Rio 2016, when she joined him in becoming an Olympian. The team also includes Sochi 2014 Olympians Graeme Killick and Jesse Cockney.

The only woman officially named to the World Cup team is Sochi 2014 Olympian Emily Nishikawa. In an effort to fill that hole in the women’s program and return it to the glory days of the early 2000s when Beckie Scott, Sara Renner and Chandra Crawford were leading the charge, there will be a focus on NextGen athletes this season. Three other women are expected to join Nishikawa on the World Cup circuit. We’re also keeping an eye on the junior and U23 world championships in late January. With the competition taking place at Soldier Hollow, the site of Scott’s Olympic medal breakthrough at Salt Lake City 2002, there is hope that Canada’s next great female cross-country skier will make herself known. 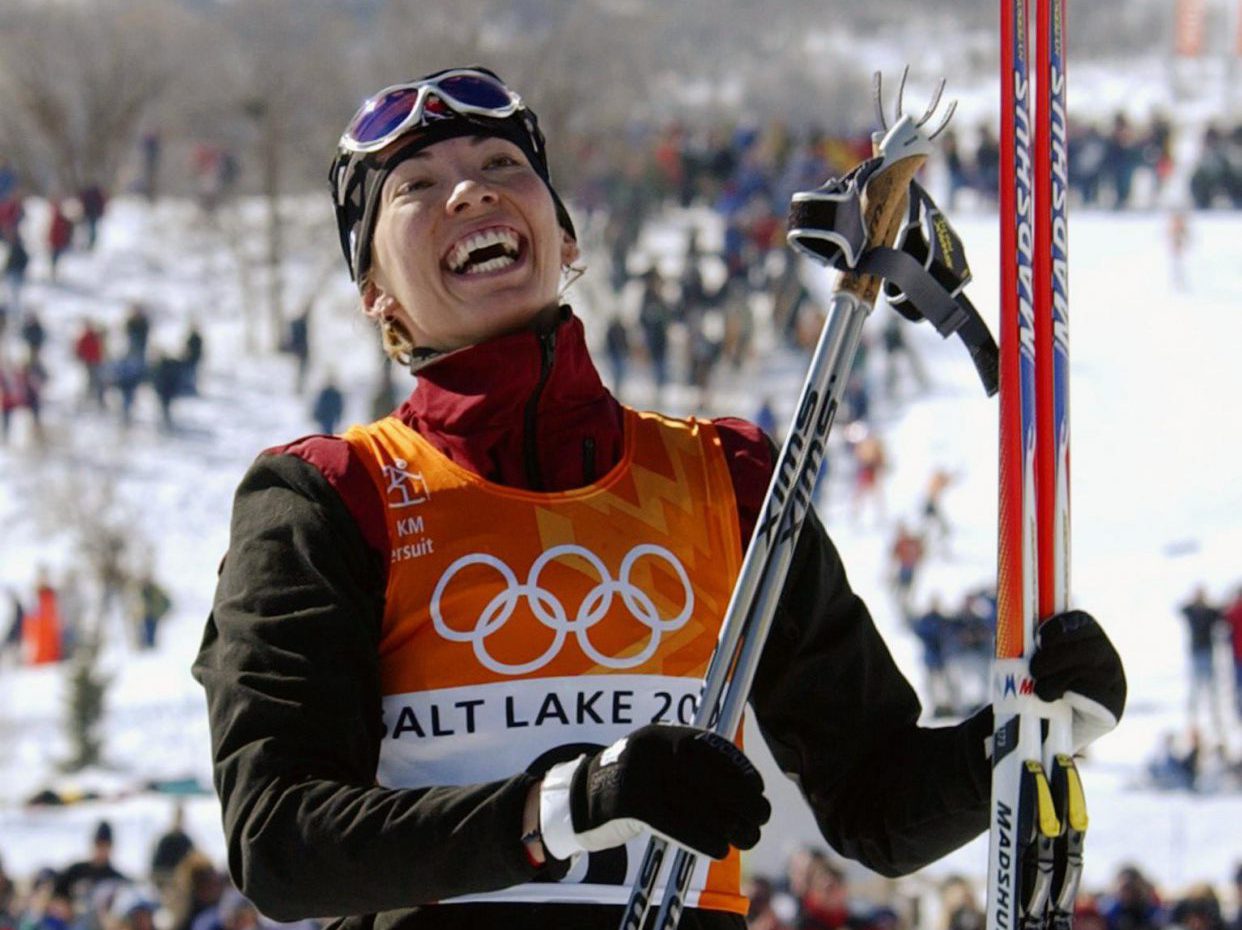 Beckie Scott, of Vermilion, Alta., celebrates her bronze medal in the women’s cross-country pursuit at the 2002 Olympic Winter Games. She would later be upgraded to the gold medal. (AP Photo/Andrew Medichini) 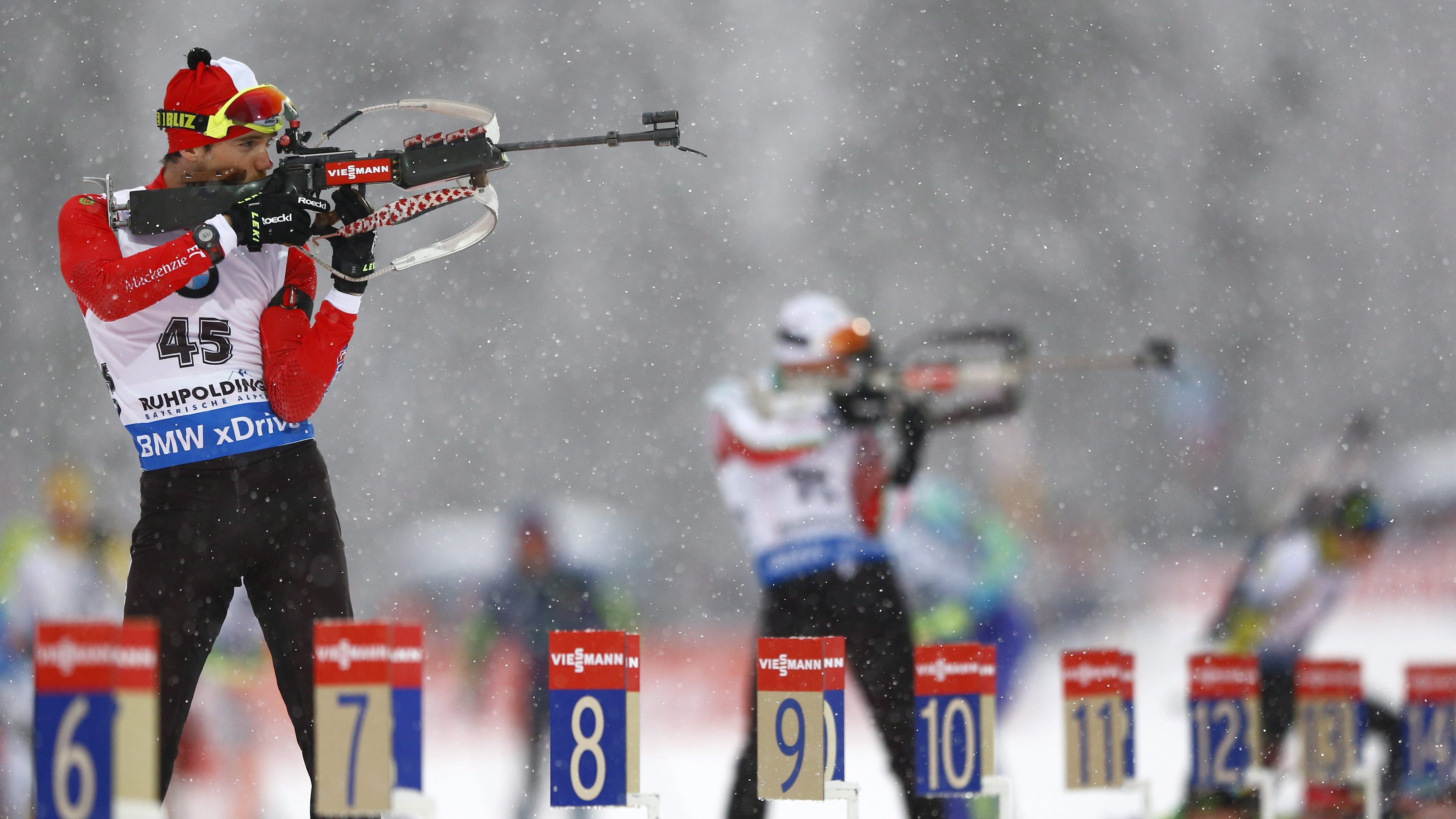 This is an exciting era in Canadian biathlon. The first big breakthrough came in 2015 when Nathan Smith won sprint silver to become the first Canadian male biathlete to stand on a world championship podium. He later won a World Cup gold medal, just the second Canadian man to ever do so. Then just last season, Smith joined with Christian Gow, Scott Gow and Brendan Green to win world championship bronze in the 4 x 7.5km relay. All four men are back racing this winter, hungry for more success as they head towards PyeongChang.

While Smith didn’t have an individual podium in 2015-16, he did earn three top-10 results on the World Cup circuit. Two-time Olympian Green has also shown he is also a strong individual competitor, recording his best World Cup placement of fifth in 2014-15. Both Gow brothers posted their best ever World Cup results in 2015-16. Macx Davis, the fifth member of the men’s national team (dubbed the Eh! Squad), had his first career top-10 World Cup finish last season. 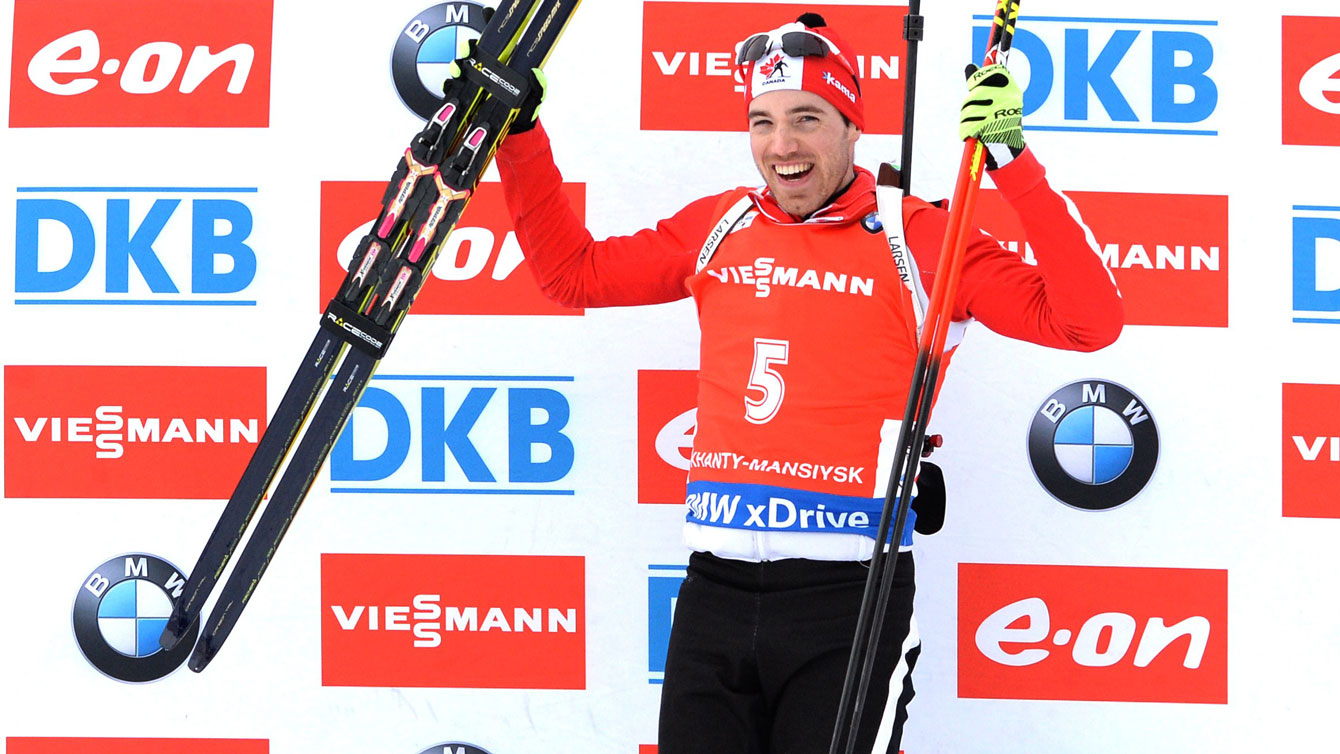 The women’s team, led by two-time Olympians Rosanna Crawford and Megan Tandy, hasn’t had the same podium success, but there is plenty of potential. After her best World Cup output in 2014-15 when she had a pair of top-five finishes, Crawford placed in the top-15 in two individual events at the 2016 World Championships. Tandy was unfortunately forced to miss those worlds after breaking her wrist prior to the home World Cup stop in Canmore. The third member of the women’s Eh! Squad, Julia Ransom, is just two years removed from competing at the world junior championships. She earned all of her career best World Cup results last season. 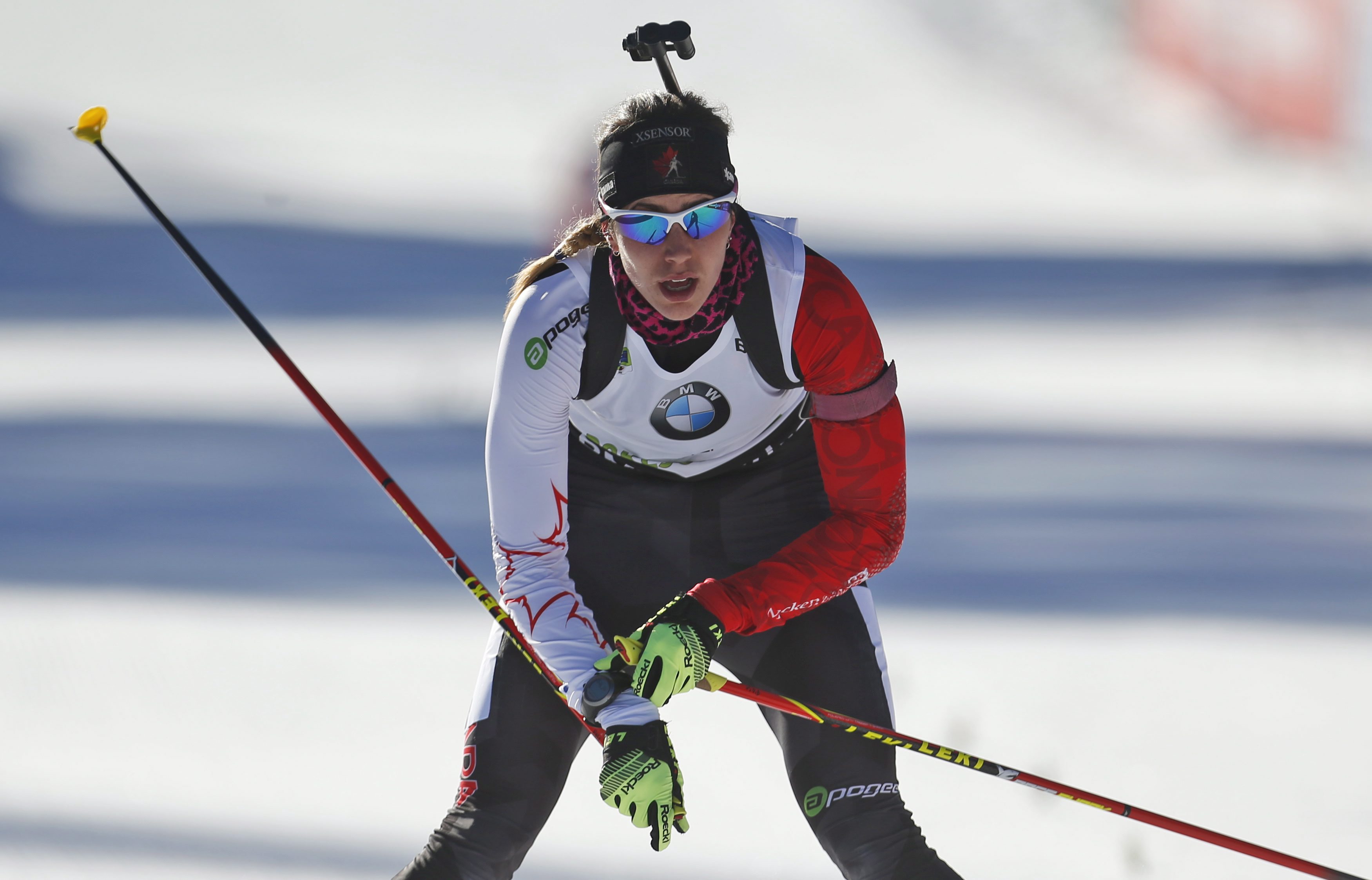 The biathletes will be getting on the Frozen Thunder snow in Canmore before heading out to the first World Cup at the end of November, as the Olympic qualification window opens. Most of the Olympic berths will be awarded based on this season’s Nations Cup standings. Canada finished last season ranked 10th in the men’s standings and 11th in the women’s standings, which would equate to five Olympic spots per gender. 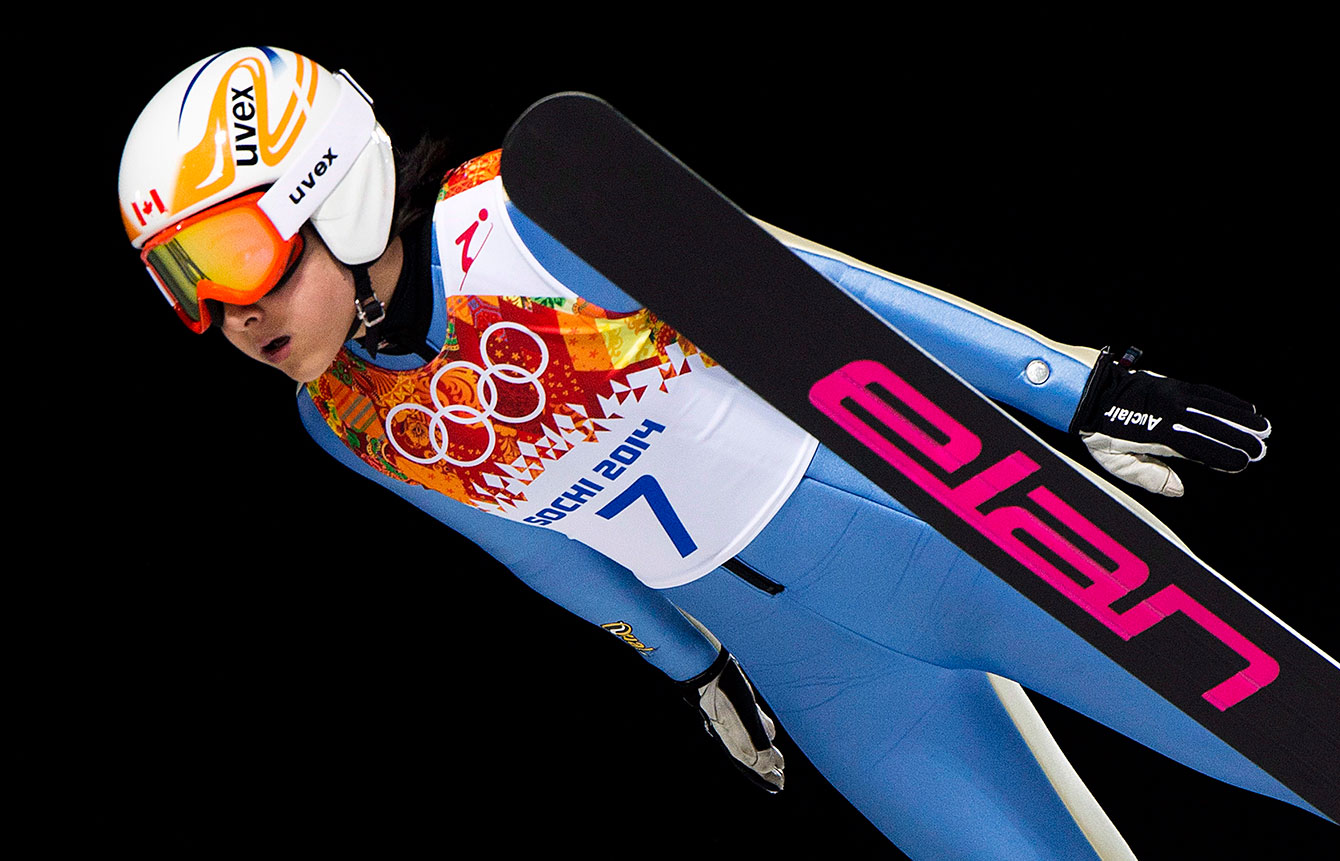 Ski jumping without snow? Yes, it is a thing, and Canada’s ski jumpers have already been competing in Grand Prix and Continental Cup events throughout the summer and early fall.

Among them are Canada’s two representatives from the Olympic debut of women’s ski jumping at Sochi 2014. Almost a year after that history-making moment, Taylor Henrich made some more, becoming the first Canadian woman to win a World Cup ski jumping medal. She followed up with a fifth place finish at the 2015 World Championships before adding another World Cup bronze. Meanwhile, the woman who had been Canada’s top-ranked ski jumper in Sochi, Atsuko Tanaka, is ready to bounce back after a couple of tough years. In June 2014 she tore her left ACL, requiring surgery. That November she was involved in a car accident and would miss the entire 2014-15 season. She took her first jumps back on snow in December 2015, returning to competition a month later. 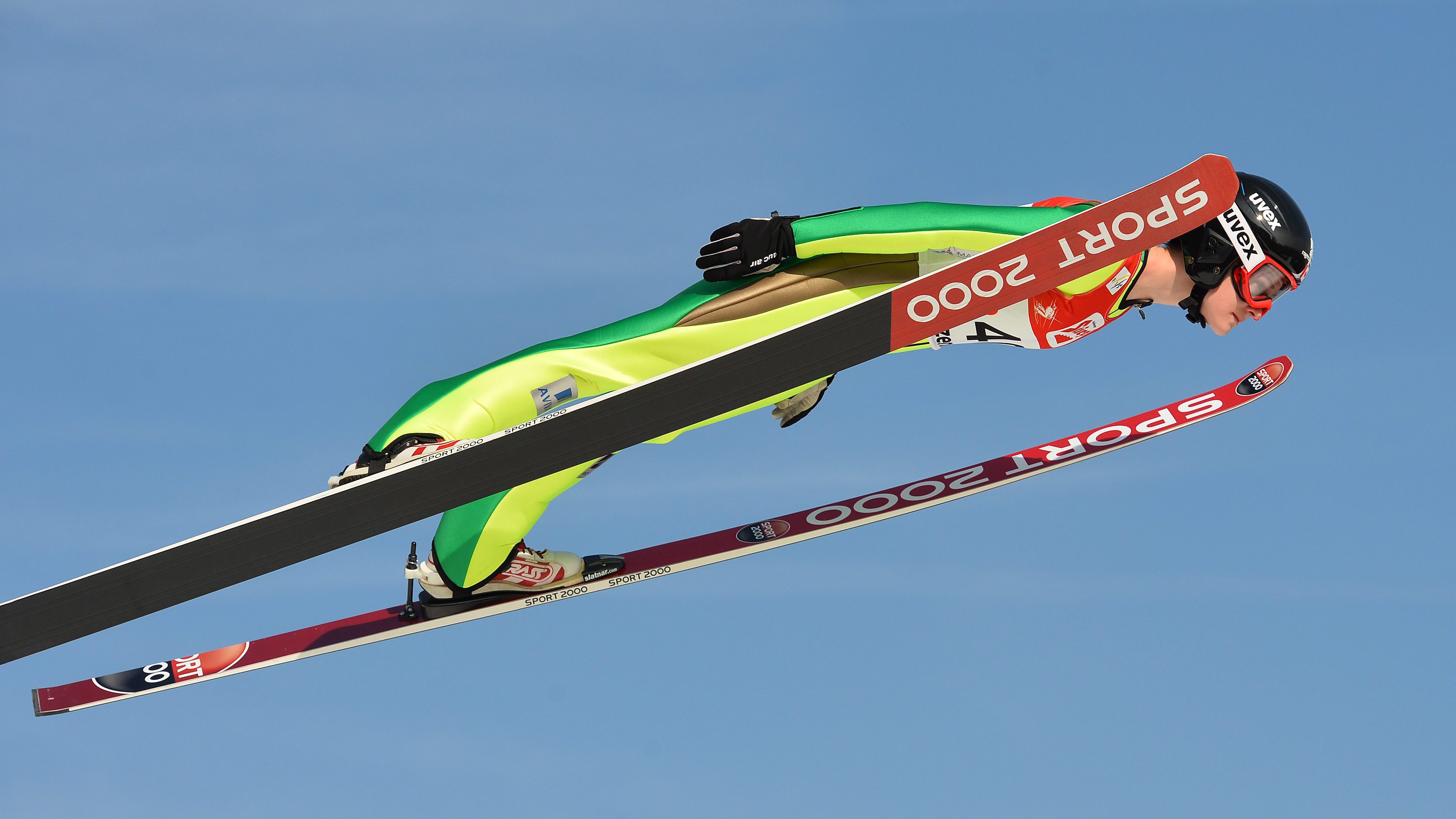 On the men’s side, two-time Olympian Mackenzie Boyd-Clowes finished third at one of those early season Continental Cups in mid-September for his first international podium since June 2012. Last winter he re-wrote the Canadian record books, first jumping 212.5m in January before hitting 221.5m in February, breaking his previous mark of 205m from back in 2013. Boyd-Clowes was just getting back into competition mode last season after sitting out 2014-15.

Among the bright hopes for the future are the Maurer siblings. At age 20, Josh qualified for his first Grand Prix event at the start of October, giving him the chance to compete against the world’s elite. His 16-year-old sister Nicole placed seventh, one spot ahead of Tanaka, to be Canada’s top finisher at their Continental Cup event in Lillehammer in mid-September. The Olympic qualification window has already opened. The next two seasons of World Cup and Continental Cup rankings will both be used to determine how many ski jumpers each country can send to PyeongChang. 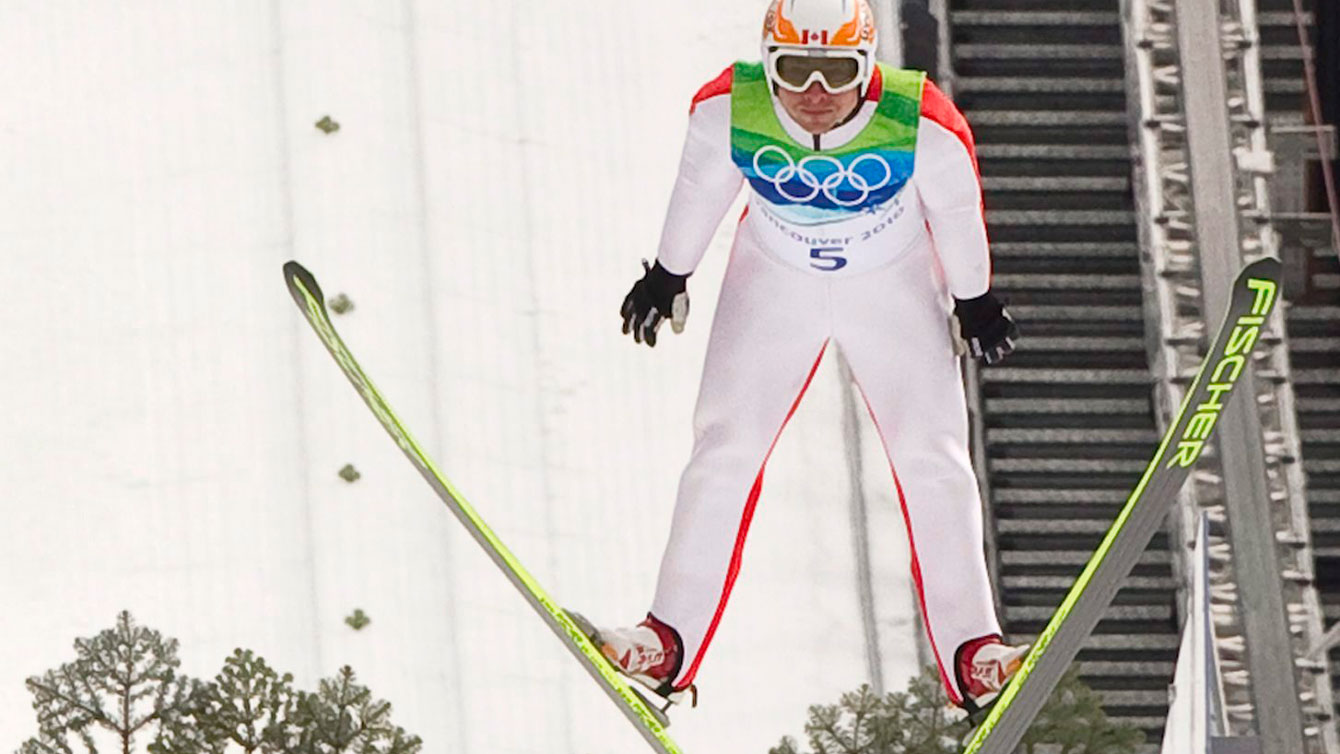 Jason Myslicki jumps in the Olympic nordic combined for Canada at the Olympic Winter Games in Vancouver on February 25, 2010.

Canada’s Olympic participation in Nordic combined has been sporadic over the years. After no representation at Sochi 2014, the athletes are anxious to change that at PyeongChang 2018. They’ll have to get started on that this season, with the Nordic combined Olympic qualification process matching that of ski jumping.

Among them are 21-year-old Nathaniel Mah. A previous Winter Youth Olympic Games competitor who won bronze in team ski jumping in 2012, Mah last competed on snow at the 2014 World Junior Championships. After suffering a concussion in August 2014, Mah took his first jump in more than a year and a half in February 2016 when he served as a forerunner for a FIS Cup event in Whistler. He returned to summer competition this past July. The veteran of the national team is Wesley Savill who competes primarily in Continental Cup events but does have World Cup experience, most recently in February 2016.