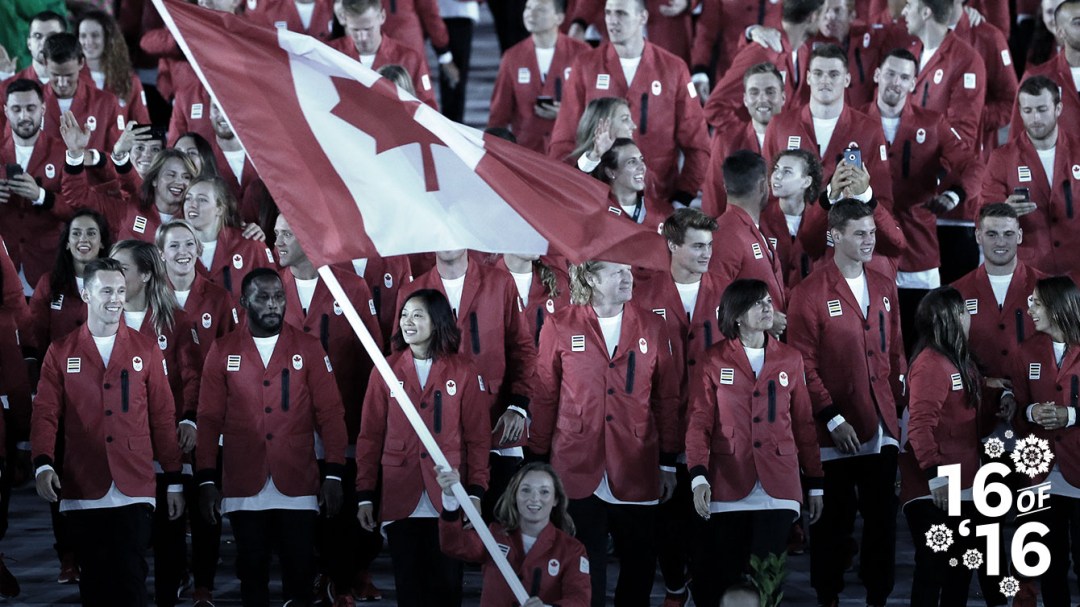 With the year coming to a close, Olympic.ca has been looking back at 16 of the most memorable Team Canada stories of 2016. With all of the “16 of ‘16” stories now revealed, you can find the entire series here.

It was a remarkable couple of weeks for Team Canada this past August in Rio.

From start to finish, there was one success story after another.

It began in the pool, where Canada won six medals, the country’s best swimming total since Los Angeles 1984. Leading the charge was 16-year-old Penny Oleksiak becoming the first Canadian athlete to win four medals at a single summer Games and, along with teammate Taylor Ruck, the first Olympic medallists born in the 2000s. 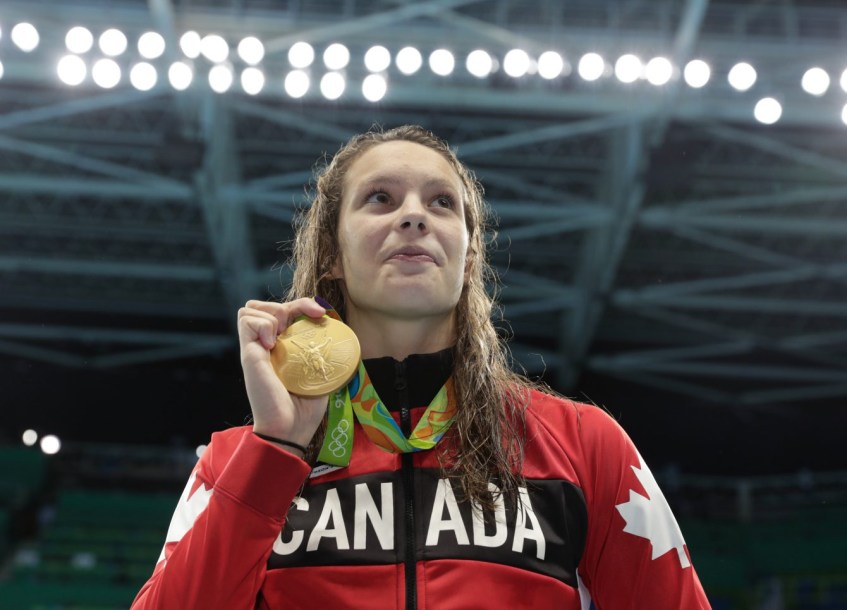 Canada’s Penny Oleksiak with her gold medal after finishing first in the women’s 100-meter freestyle during the swimming competitions at the 2016 Summer Olympics, Thursday, Aug. 11, 2016, in Rio de Janeiro, Brazil. (COC photo/JasonRansom) 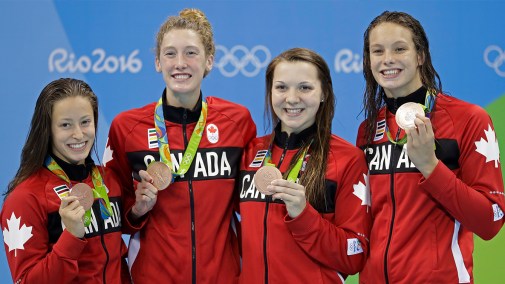 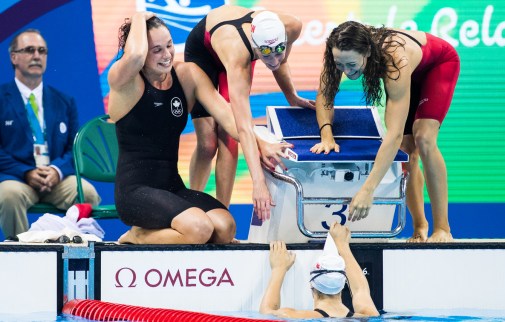 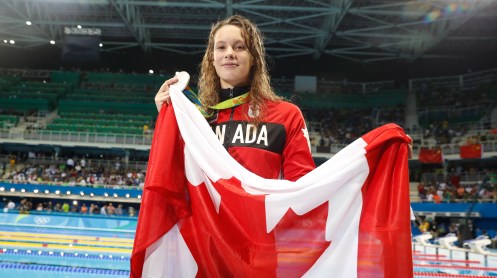 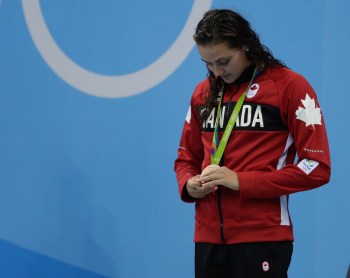 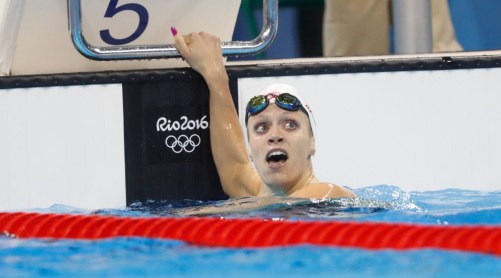 Read: A closer look at Canada’s swimming success at Rio 2016

That prowess that part of a Canadian record streak, as athletes wearing the maple leaf won medals on the first nine days of the Games. 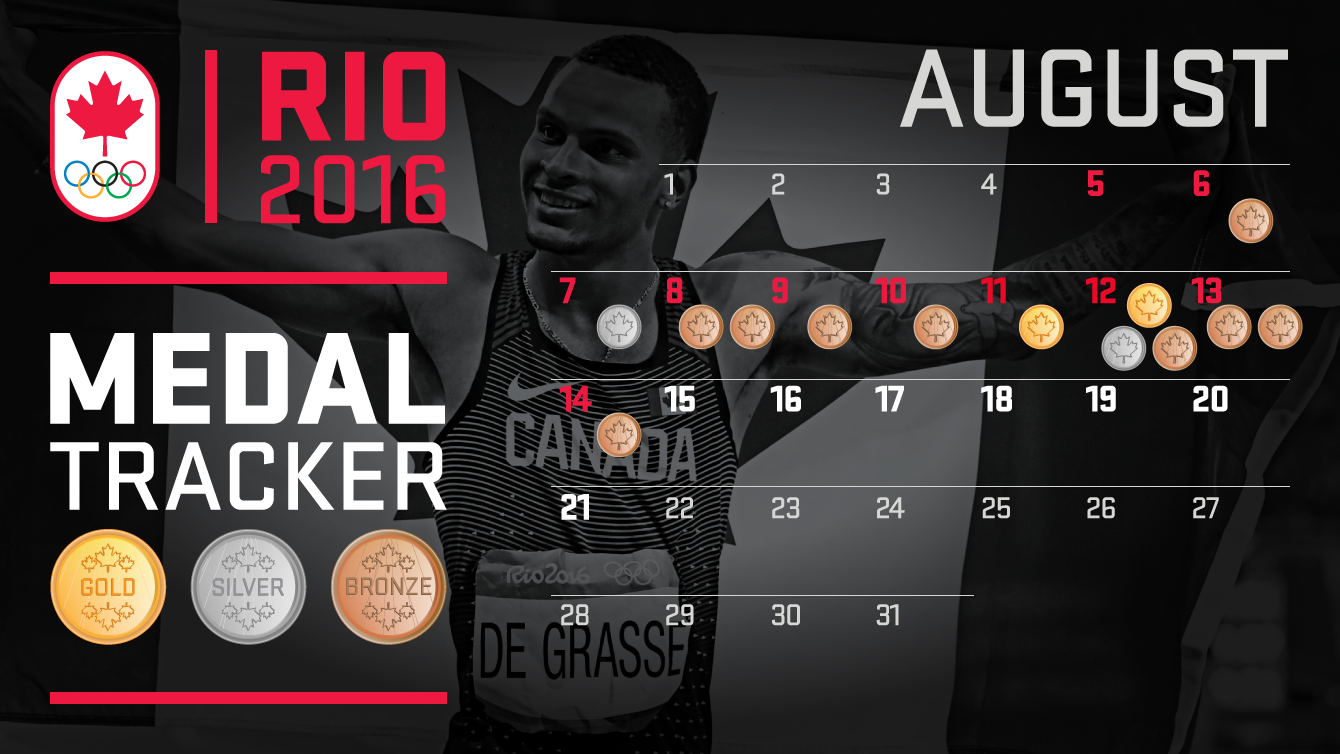 Included in that was the trampoline gold won by Opening Ceremony flag bearer Rosie MacLennan who became the first Canadian athlete to successfully defend an Olympic title at the summer Games. The Canadian women won bronze in the first ever Olympic rugby sevens tournament. There were also the second straight bronze medals in 10m synchro diving by Meaghan Benfeito and Roseline Filion and in track cycling’s women’s team pursuit, plus Canada’s only rowing medal of the Games, courtesy of Lindsay Jennerich and Patricia Obee. Benfeito later added an individual 10m bronze. 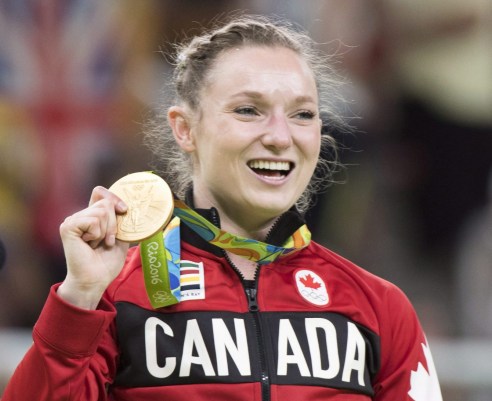 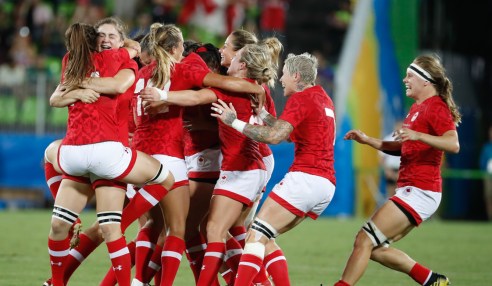 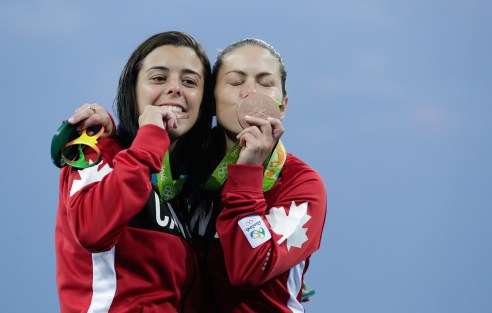 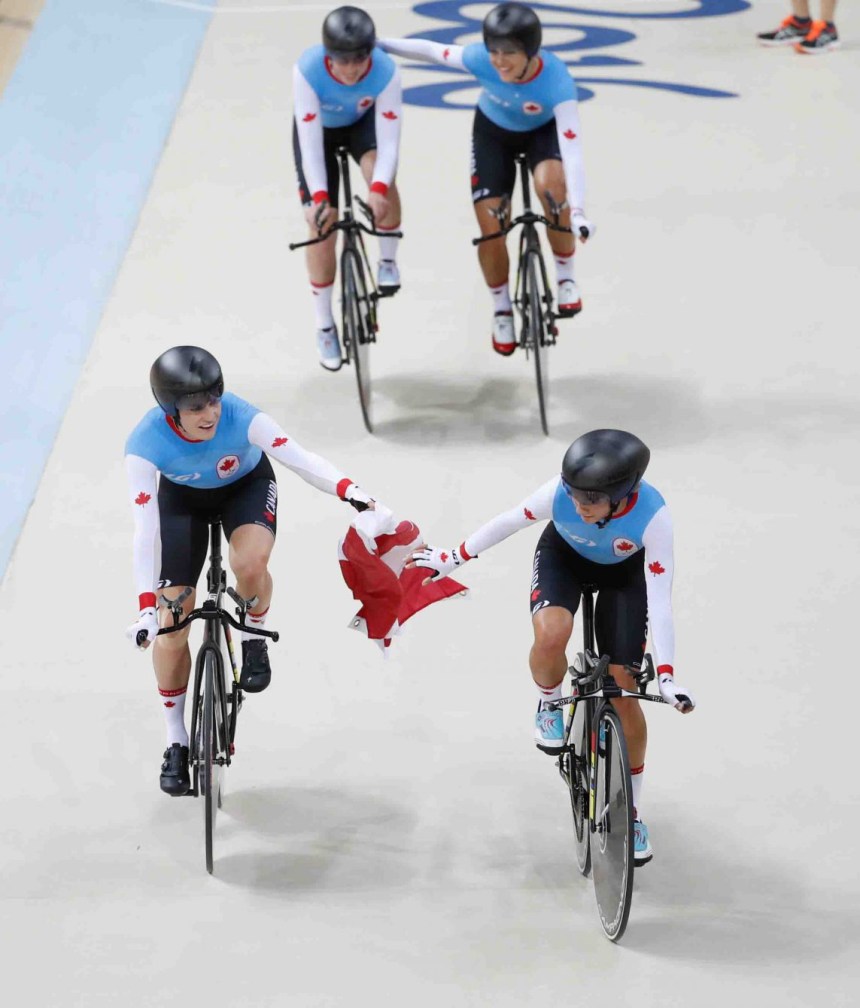 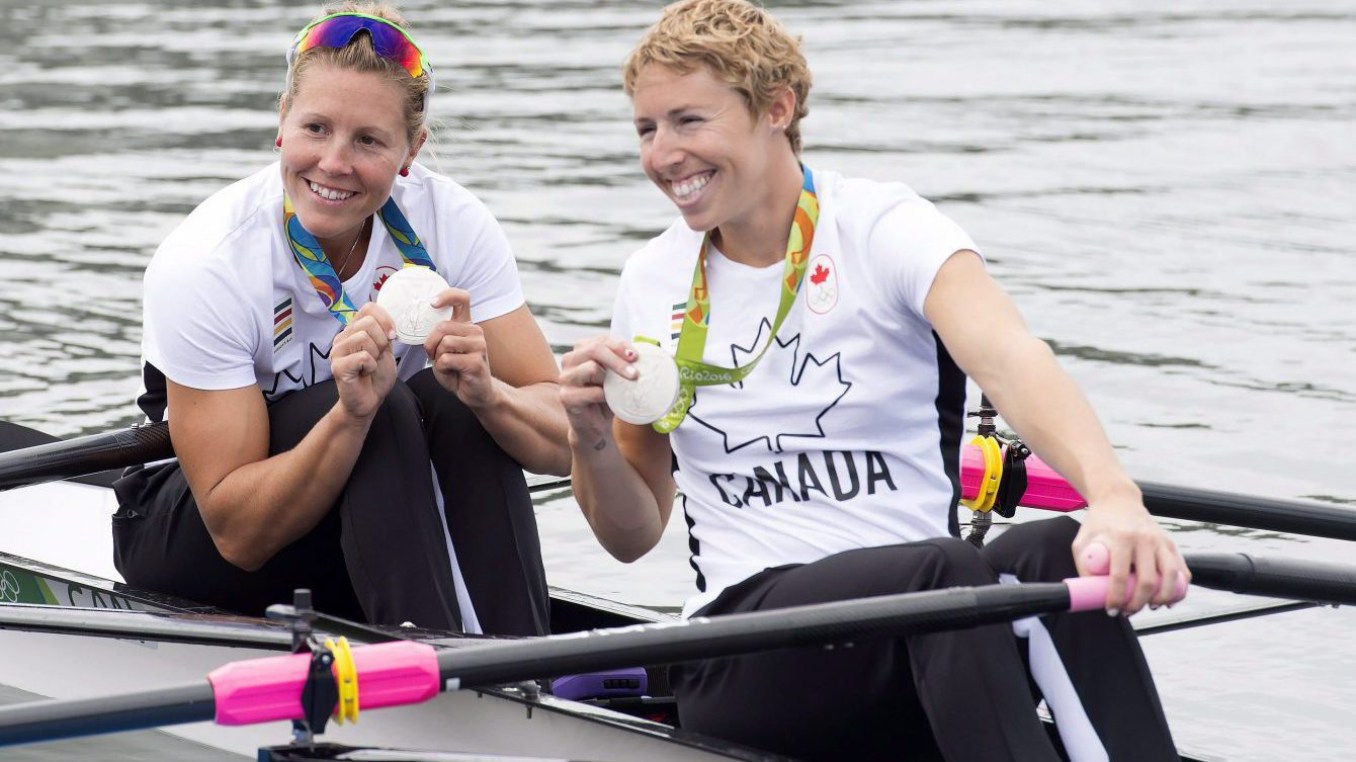 As week one turned into week two and swimming gave way to athletics, the podium performances kept coming.

Six track and field medals were the most Canada had won since Los Angeles 1932. Derek Drouin had a perfectly clean sheet on the way to high jump gold, just the sixth person to do so in Olympic history. Brianne Theisen-Eaton and Damian Warner made Canada the only country to win medals in both combined events. Andre De Grasse became the first Canadian sprinter to ever triple medal in the 100m, 200m and 4x100m relay, anchoring the latter to a national record run. 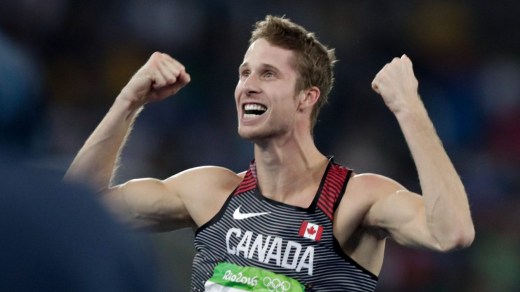 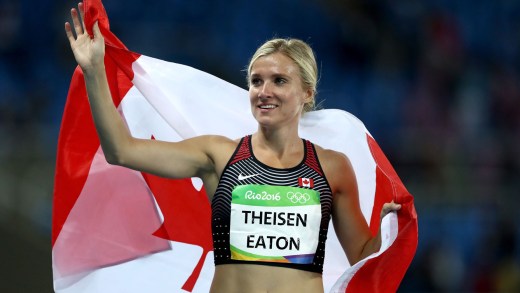 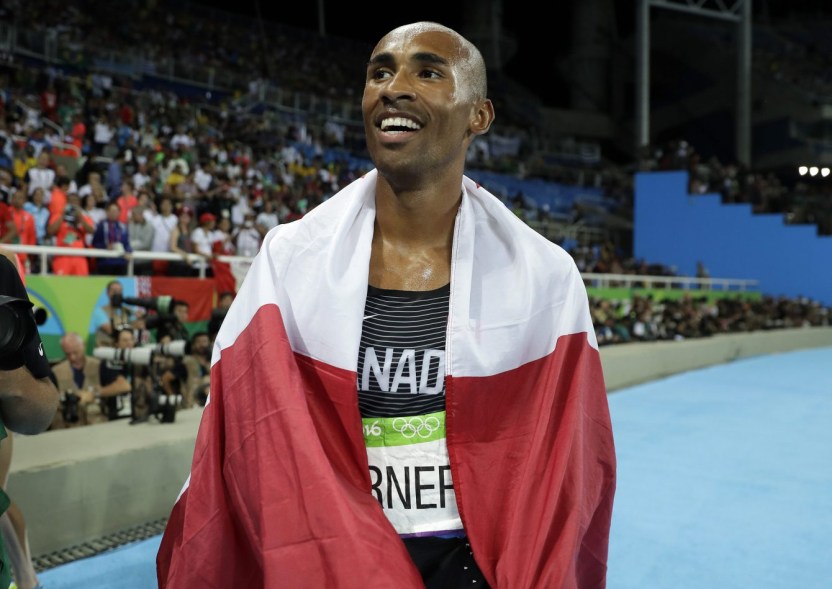 Canada’s Damian Warner celebrates after winning the bronze medal in the decathlon, during the athletics competitions of the 2016 Summer Olympics at the Olympic stadium in Rio de Janeiro, Brazil, Thursday, Aug. 18, 2016. (AP Photo/Matt Slocum) 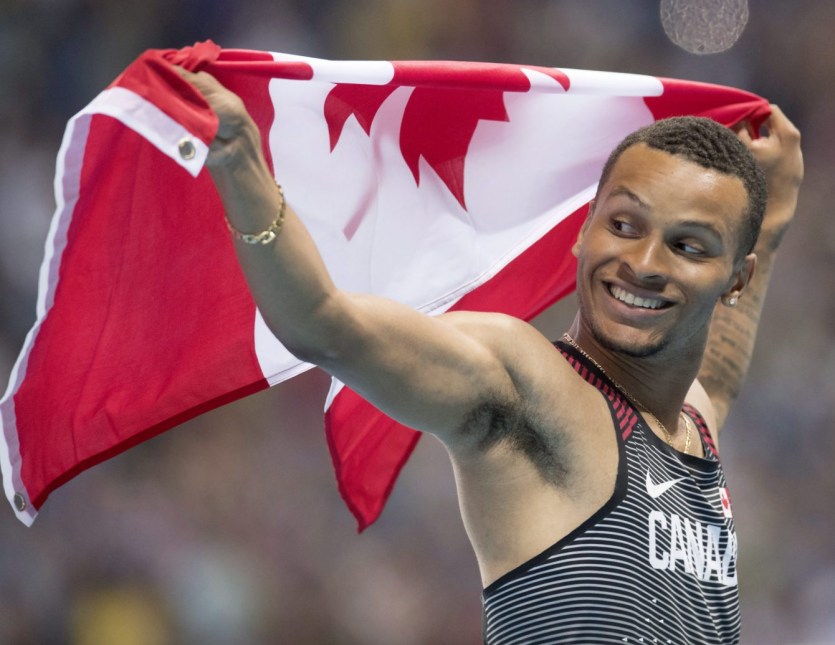 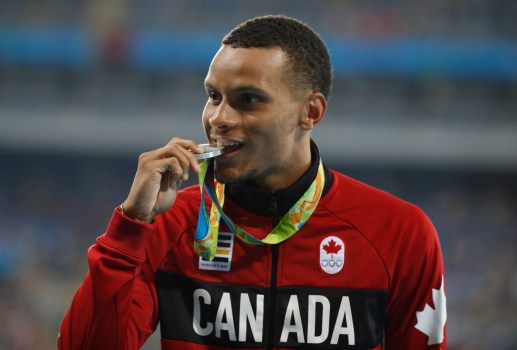 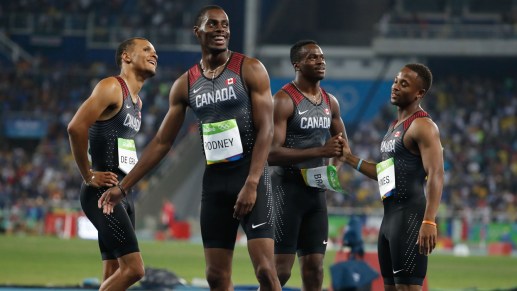 Eric Lamaze got an incredible effort from Fine Lady 5, delivering clean round after clean round en route to bronze to become Canada’s most decorated Olympic equestrian. Catharine Pendrel completed the medal count, coming back from an early crash to win mountain bike bronze. 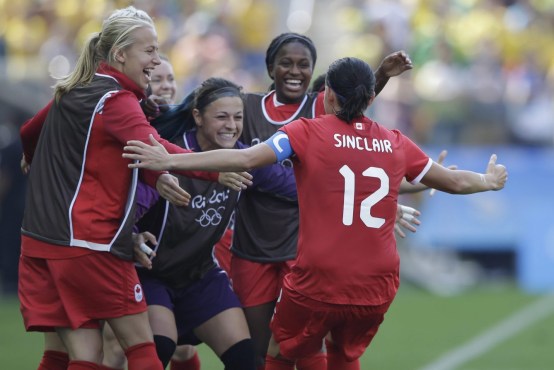 Canada’s Christine Sinclair, 12, is congratulated after scoring her side’s 2nd goal during the bronze medal match of the women’s Olympic football tournament between Brazil and Canada at the Arena Corinthians stadium in Sao Paulo, Friday Aug. 19, 2016. (AP Photo/Nelson Antoine) 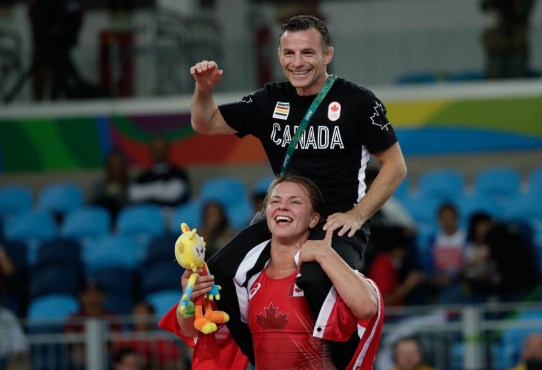 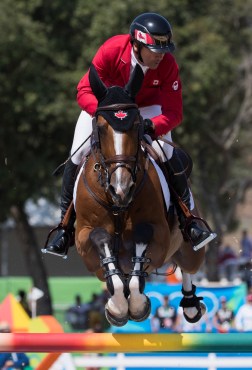 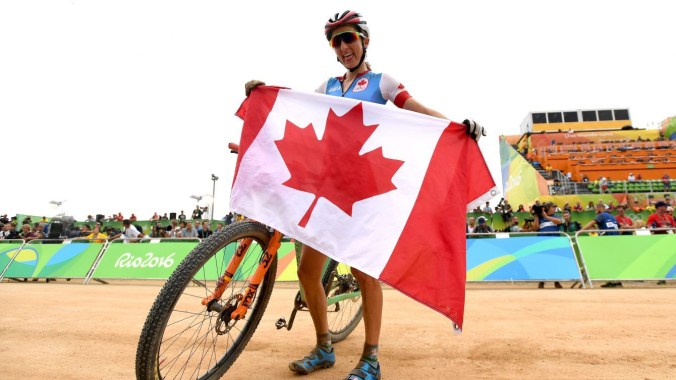 Canada’s Catharine Pendrel poses with the Canadian flag as she celebrates winning the bronze medal in the women’s mountain bike final at the 2016 Olympic Summer Games in Rio de Janeiro, Brazil on Saturday, Aug. 20, 2016. THE CANADIAN PRESS/Sean Kilpatrick 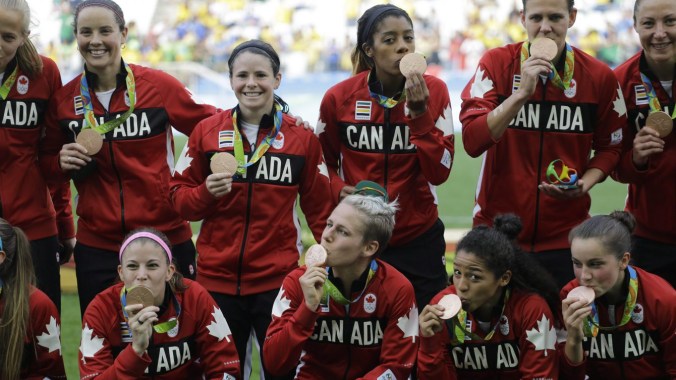 Canada team poses for photos after winning the bronze medal in the women’s Olympic football tournament between Brazil and Canada at the Arena Corinthians stadium in Sao Paulo, Friday Aug. 19, 2016. (AP Photo/Nelson Antoine)

Read: By the Numbers: Team Canada success at Rio 2016

All told, Canada won 22 medals, matching its best ever total at a non-boycotted summer Games but winning one more gold medal than at Atlanta 1996.

Truly a Games for the record books.