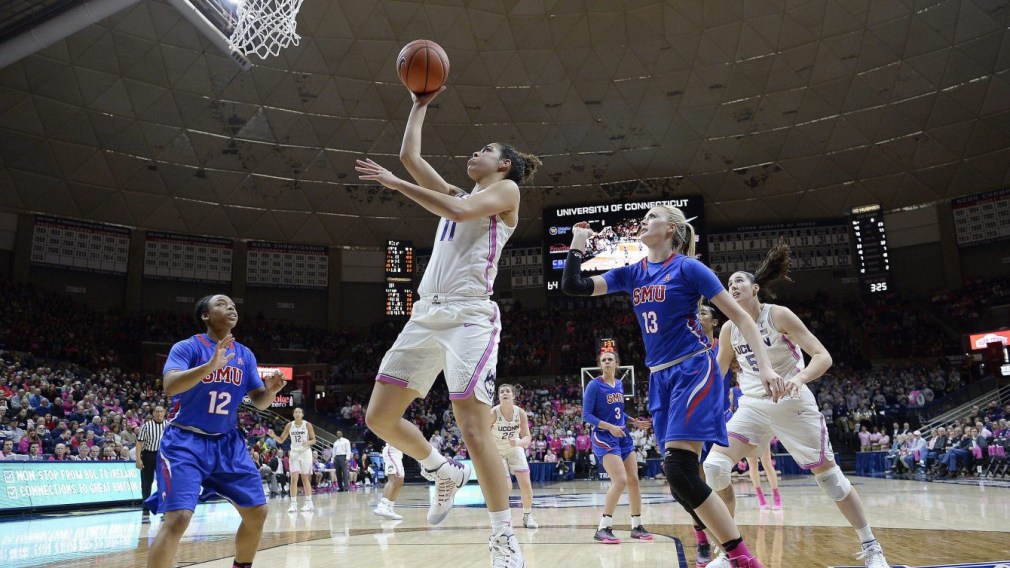 Kia Nurse, the UConn Huskies and a National Championship have a lot in common.

Following their historic 100th straight win on February 13, Nurse and the Huskies could extend their winning streak to 113 games by the end of the women’s NCAA Tournament. If they do so, it would mark their fifth straight national title.

Nurse, a 6 foot junior guard from Hamilton, has won two National Championships with the Huskies. She is also one of two players to play in all 100 games of the winning streak – her last loss coming in her rookie season on November 17, 2014 against Stanford.

Safe to say, choosing the UConn Huskies as your national champs in this year’s March Madness bracket is a favourable bet. You can see the full bracket here.

Not only has Nurse been integral to UConn’s success over the last few years, but she is also the youngest member of the Canadian Women’s National Team. Still just 21, Nurse has competed with the Senior National Team since she was 17, most recently playing in the Toronto 2015 Pan American Games and the Rio 2016 Olympic Games. 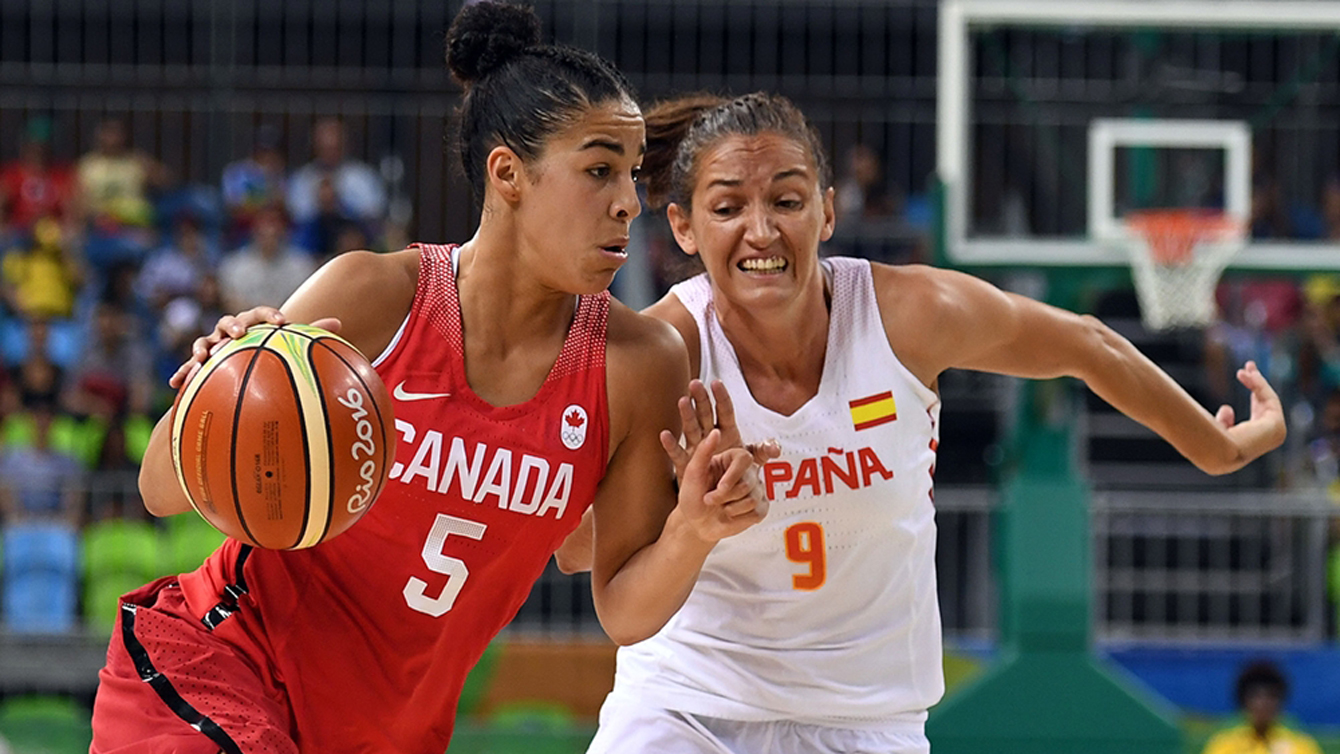 Kia Nurse has represented Team Canada in many tournaments, most recently in the Rio 2016 Olympic Games. (Photo: FIBA)

At Toronto 2015, Nurse came off the bench and averaged an impressive 25.2 minutes, 12.8 points, 3.8 rebounds and 2.2 assists per game in the five games of the tournament. In the final game at the 2015 Pan Am Games against a strong Team USA, Nurse led her team to a gold medal with 33 points, 6 rebounds, 3 assists in 29 minutes of court time, earning her bragging rights with some of her UConn teammates representing the United States. She was also chosen to carry the Canadian flag at the Closing Ceremony.

Not surprisingly, Connecticut is heading into the NCAA Tournament seeded first in the Bridgeport Regional. Their first opponent is America East Champions, the University of Albany Great Danes. Coincidentally, this first round match-up will feature four Canadians. 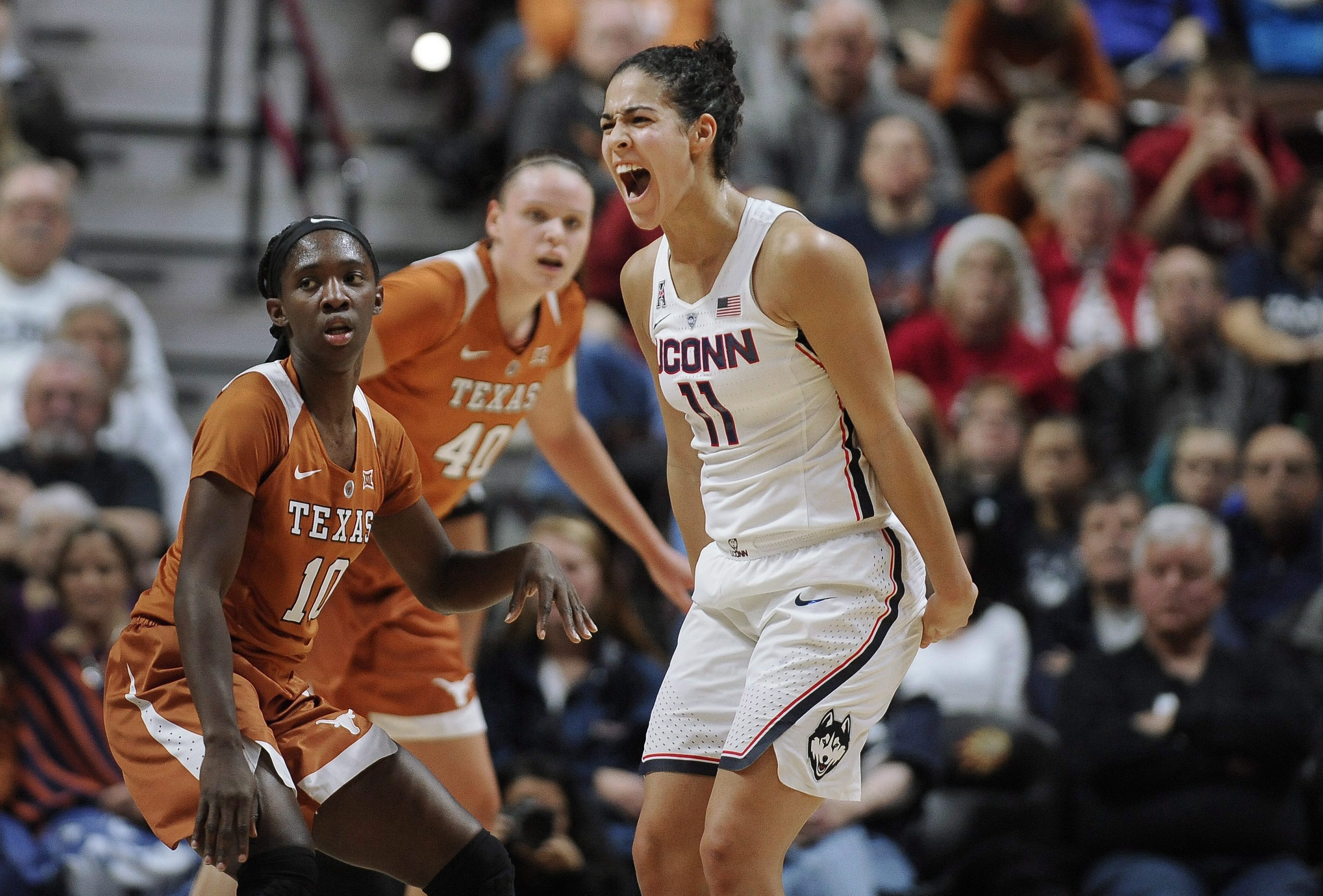 But Connecticut and Albany aren’t the only teams in the women’s NCAA Tournament with Canadians.

With the rankings released, 25 Canadians hold a spot on the rosters of the 64 qualified teams. Four provinces are represented, with the majority of players hailing from Ontario.

Besides Nurse, here is a look at other exceptional Canadian players in this year’s women’s tournament: 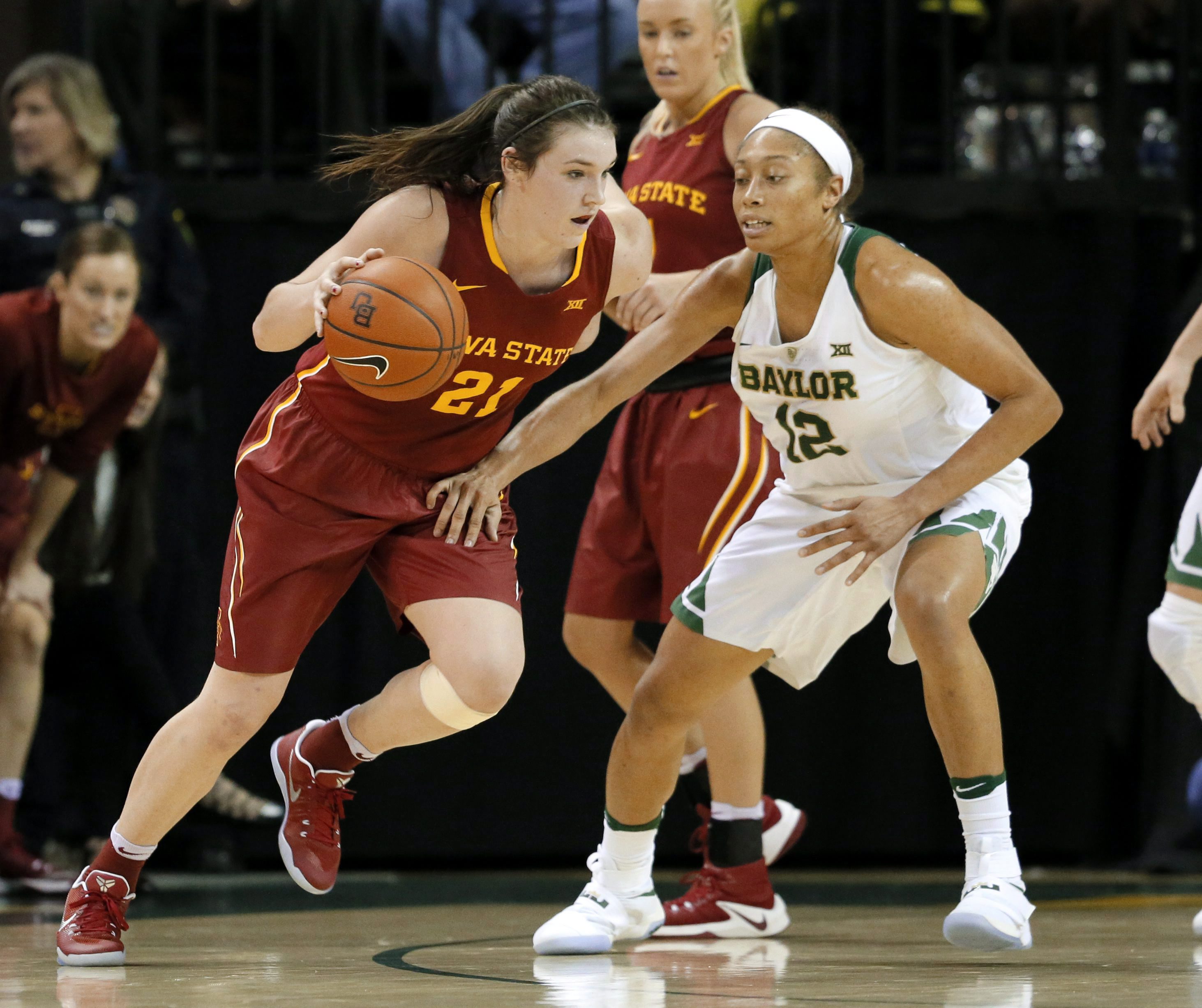 Iowa State guard Bridget Carleton (21) will be playing two other Canadians in the Cyclones match-up against Syracuse. (AP Photo/Tony Gutierrez)

Second on her team in points and rebounds per game with 15.2 and 5.8 respectively, Carleton helped lead the Iowa State Cyclones to an 18-12 season, earning themselves a ninth-seed in the Bridgeport Regional. The 6 foot 1 senior guard is also a familiar face to the Canadian Women’s National Team. In the summer of 2016, Carleton had the opportunity to play in some exhibition games prior to the Rio Olympic Games, averaging 8.2 minutes in six games. Also a member of the Development Women’s National Team in the summer of 2016, Carleton played a significant role in the Prague Open Tournament. She averaged 24.7 minutes, 13.2 points, and 6 rebounds in four games. In the final year of her NCAA career, Carleton was named a First Team Big 12 player. In the first round of the tournament, the Cyclones play Syracuse in a battle of the eighth and ninth seeds. Once again, three Canadians are represented in this first round matchup on March 18.

Coming off her first career double-double… #KStateWBB freshman forward Eternati Willock is ready to take her game to a new level! 🏀😼😈 pic.twitter.com/ES9gFGDZjb

Named to the Big 12 All-Rookie Team, Willock has had a tremendous impact on the Kansas State University Wildcats in the 2016-17 season. The 6 foot 2 forward is averaging 20.0 minutes, 7.0 points, 5.3 rebounds and 1.4 assists per game heading into the NCAA Tournament. The eighth-seed Wildcats are looking to improve on their 22-10 record with a first round game against tenth-seed Drake in the Lexington Regional. 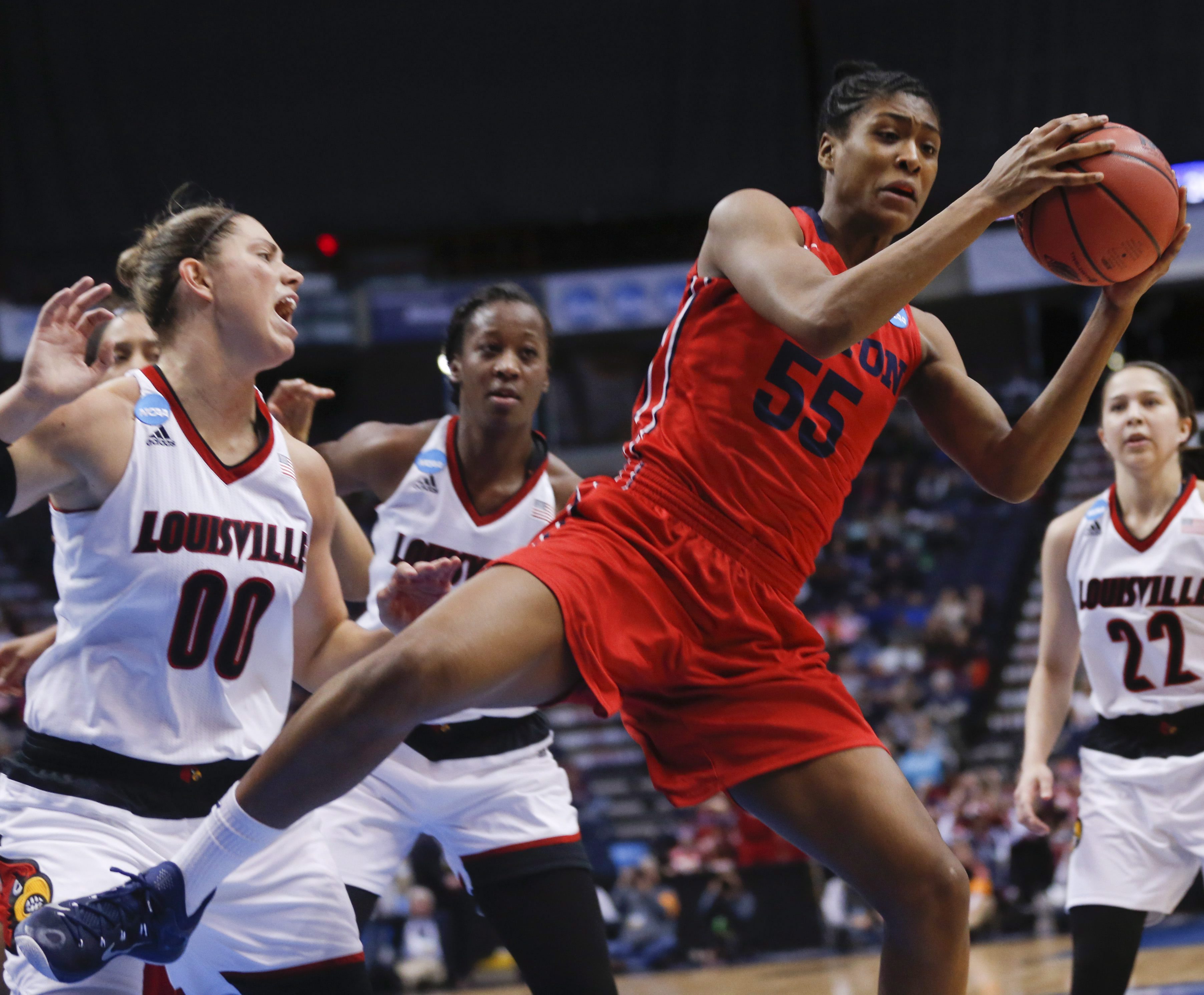 The 6 foot 5 senior forward was named to the Atlantic 10 All-Defensive Team thanks to her 8.8 rebounds and 1.2 blocks per game. Also named to the A-10 Second Team, Grant-Allen averaged 10.0 points per game to help the Dayton Flyers to a  22-9 overall record. The 12th-seed Flyers will take part in the Oklahoma City Regional in the NCAA Tournament, facing fifth-seed Tennessee in the first round on March 18.

Féquière is one of three Canadians on the University of Albany Great Danes, who will have to deal with Nurse and the UConn Huskies in the first round of the NCAA Tournament. Féquière received an American East Conference Second Team Honour this season after averaging 12.4 points, 7.2 rebounds and 1.9 assists in 30.8 minutes per game. The Great Danes may be underdogs, but they are no stranger to an upset, having eliminated Florida in last year’s first round. 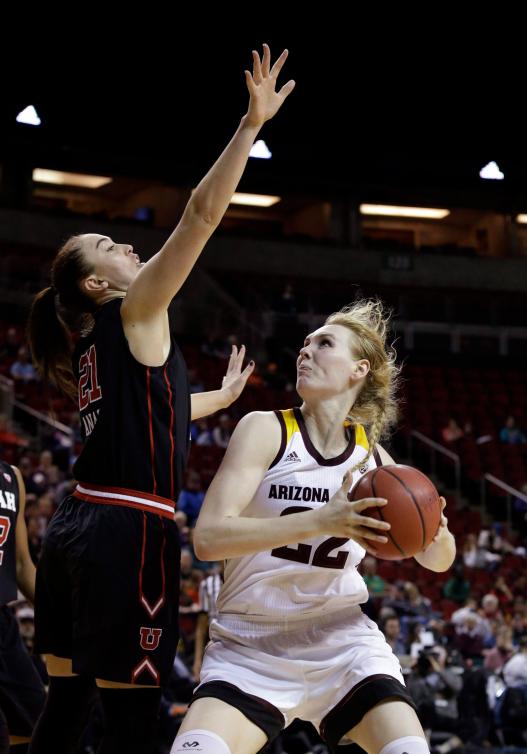 In 21.8 minutes per game, Dornstauder averaged 9.0 points and 5.5 rebounds per game on the very strong Sun Devils team. With an overall record of 19-12, Dornstauder and the eighth-seed Sun Devils will face a comparably strong ninth-seed Michigan State, whose overall record is 21-11. Tipping off on March 17 in the Stockton Regional, this will be another battle between an eighth and ninth seed.

Still not sure who to pick in your bracket? There are plenty Canadians to help you choose.

Here is a list of all the Canadian players in the women’s NCAA Tournament, by region:

Canadian star Nurse looking to win third straight NCAA Championship
Ana Padurariu: Facing the never-ending challenges of 2020
What is the difference between racquetball and squash?
Shuttlecock and balls: The fastest moving objects in sport
Team Canada Athletes Train at Home
Getting vertical: The highest jumps in sport