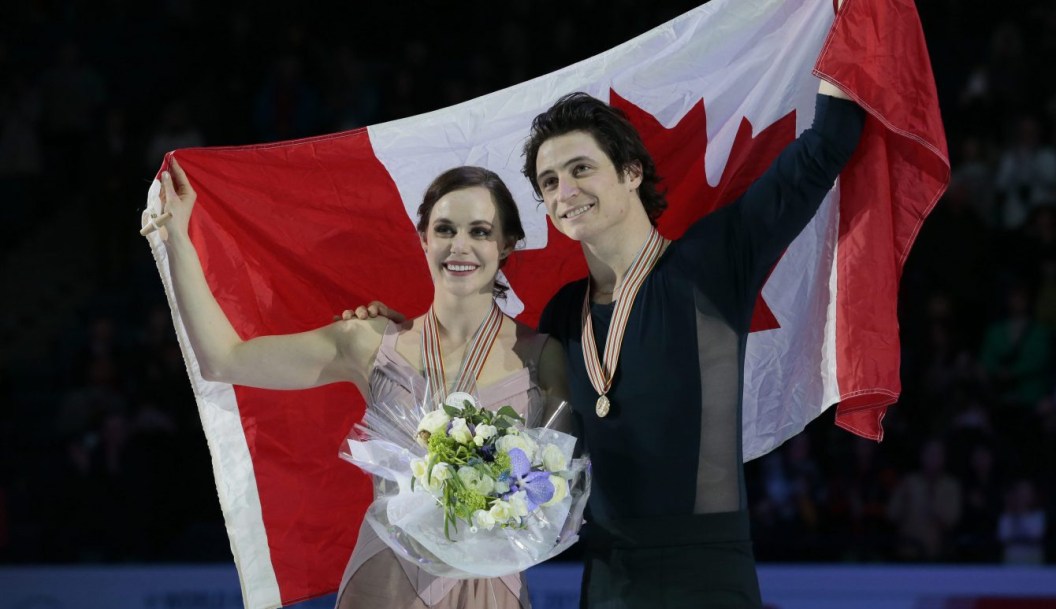 “We’re thrilled. To come away with the title is a huge accomplishment and something I’m not sure even we expected at the onset of the season,” Virtue said in the post-event press conference. 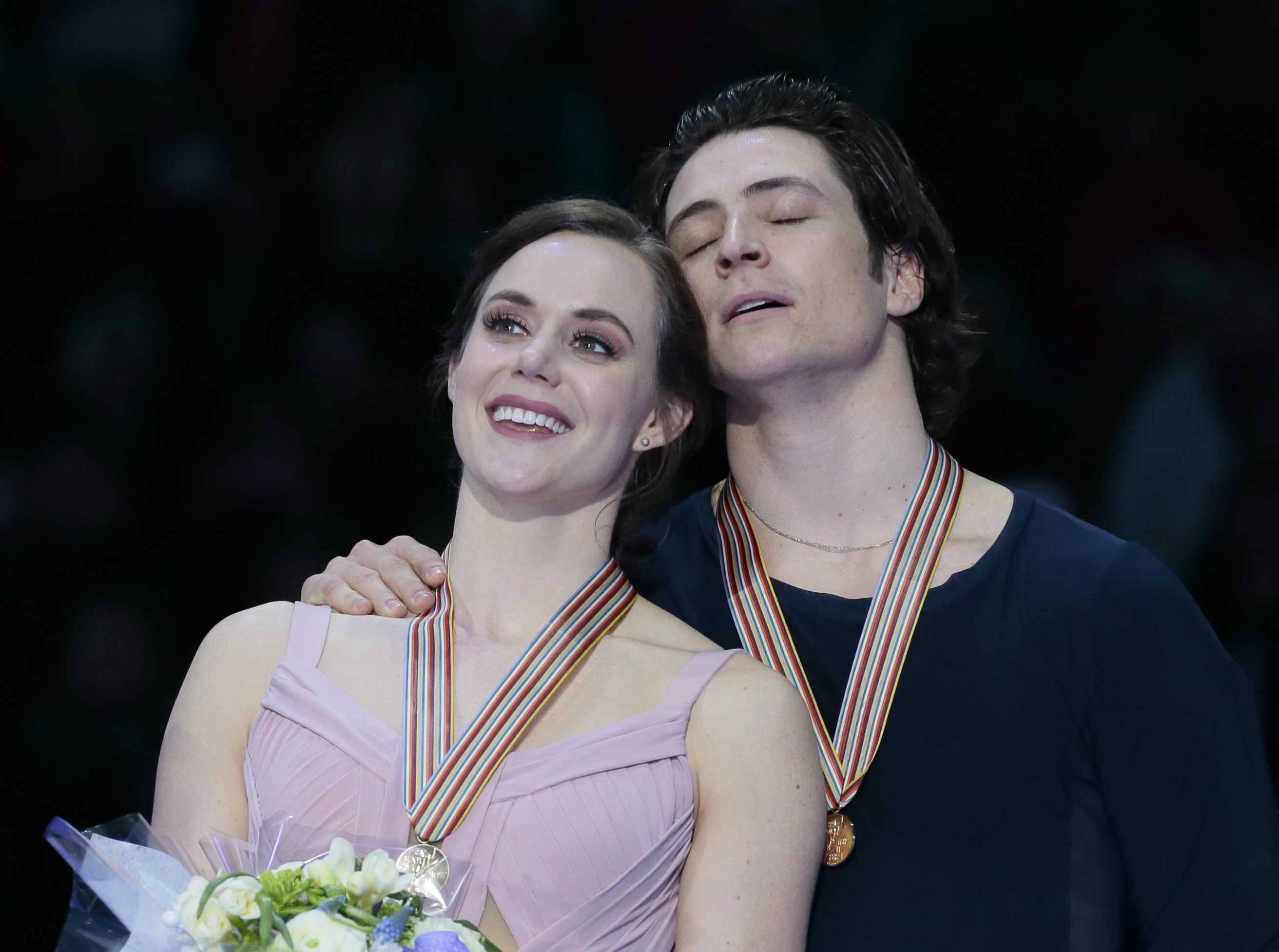 Tessa Virtue and Scott Moir, of Canada, react listening to the national anthem after winning the gold at the world figure skating championships in Helsinki, Finland, on Saturday, April 1, 2017. (AP Photo/Ivan Sekretarev)

Their free dance wasn’t a perfect performance, as Moir had a small slip midway through that caused him to put his hand to the ice. But luckily that mistake didn’t happen on one of the technical elements, coming just as they completed the circular step sequence, so it didn’t prove too costly. That step sequence was the only element in their free dance to not earn a level four as they scored 116.19 to earn a world record overall total of 198.62.

“Our goal this year wasn’t so much about winning. When we got in these pressure situations we tried to remind each other what our goal was and what our perspective was,” said Moir. “Obviously that’s tougher when you’re trying not to touch the ice for a deduction but we popped back into it pretty quick and to be honest, when something like that happens, we’re not thinking so much about points, we’re just thinking about delivering a program.”

Virtue and Moir had come into the free dance with a five and half point lead over two-time world champions Gabriella Papadakis and Guillaume Cizeron. And they needed some of that buffer they had built up with Friday’s world record short dance. Their French training mates skated just ahead of them, earning a world record 119.15 for their free dance, beating the mark they set in winning last year’s worlds. Combined with their short dance, they totaled 196.04 for the silver medal.

American siblings Maia and Alex Shibutani took the bronze with an overall score of 185.18.

Just 0.37 behind in fourth place were Canada’s Kaitlyn Weaver and Andrew Poje with a personal best 184.81 after they earned 109.97 for their free dance. They moved up from sixth place after the short dance, benefiting from major twizzle errors by two American teams who had been ahead of them. 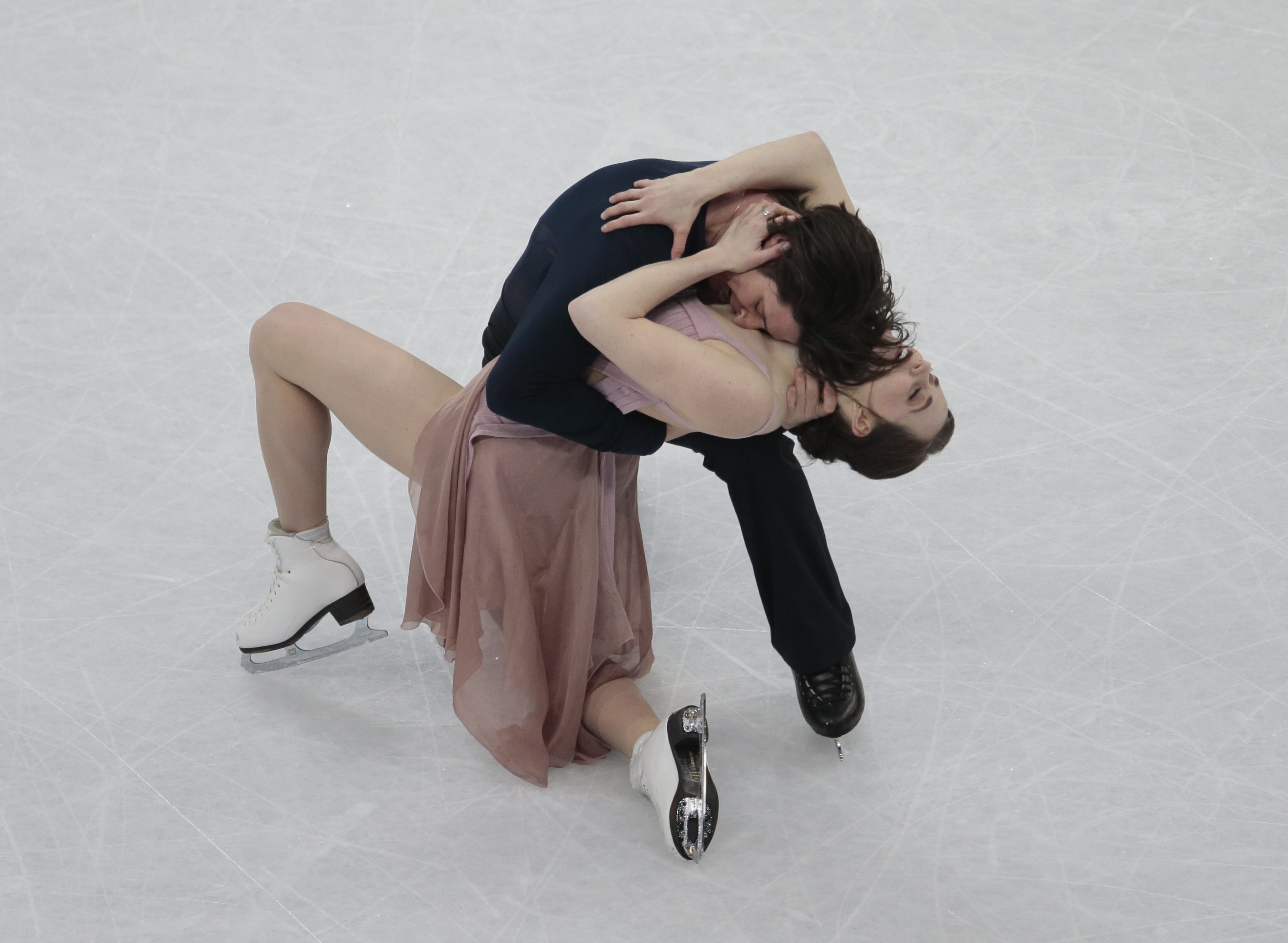 Tessa Virtue and Scott Moir, of Canada, skate their free dance to win the gold at the world figure skating championships in Helsinki, Finland, on Saturday, April 1, 2017. (AP Photo/Ivan Sekretarev)

But even with that resume, there were still new highlights this year, including their first ever Grand Prix Final title among their six international victories.

“It has been a successful season and we tried not to get carried away with that because we’ve never had a quote unquote perfect season, we’ve never had that run of golds,” said Virtue. “At this point it’s fun to have on our resume but more than that I think what we’ve been able to accomplish personally as athletes has been the most satisfying.”

Earlier on Saturday, Patrick Chan finished fifth in a highly competitive men’s event. He was able to land two of his three planned quads cleanly in the free skate, including the Salchow which was newly added to his program this season. But he did have a couple of minor errors, which earned him a free skate score of 193.03 to bring his overall total to 295.16, just off his personal best.

Teammate Kevin Reynolds was one of those attempting a quartet of quads, but he also had some minor jump issues with three deemed under-rotated. His ninth-place finish combined with Chan’s fifth means Canada was one placement away from earning three Olympic berths and will instead qualify two men for PyeongChang 2018.

Japan’s Yuzuru Hanyu won his second world title with a total score of 321.59, climbing up from fifth after the short program thanks to a world record free skate (223.20) that included four clean quads. His countryman Shoma Uno (214.45 free skate, 319.31) also got in his four quads to remain in second place where he had been after the short program. China’s Boyang Jin (204.94 free skate, 303.58 overall) repeated as world bronze medallist with his own clean four quad performance, highlighted by the quad Lutz.