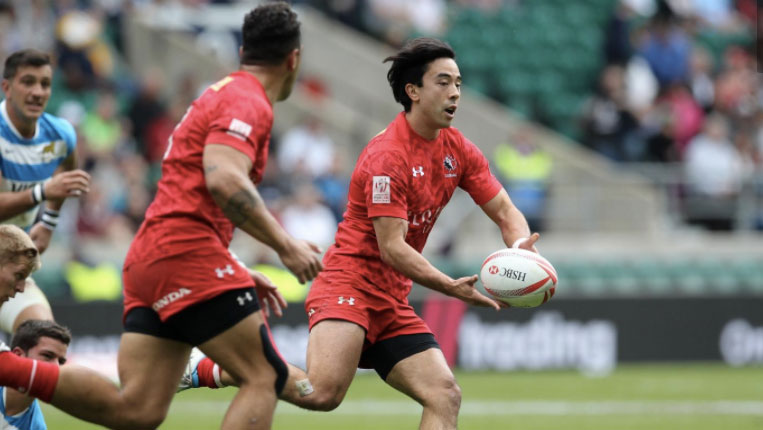 Rugby Canada’s sevens men ended the season finishing third in London after beating the United States 22-19 on Sunday at Twickenham.

The Canadian bronze at London Sevens arrives at the end of a historic 2016-17 World Rugby Sevens Series that saw Canadian men win their first series title at Singapore Sevens in April.

Mike Fuailefau scored the opening try of the match, but Nathan Hirayama’s conversion was missed, putting Canada up 5-0 early on Sunday.

The Americans responded with Perry Baker managing to keep possession on the first US series, before Maka Unufe hurdled over Hirayama to equalize, and a conversion put them ahead 7-5.

United States regained possession on the next restart and it took a scrambling, strong tackle from Justin Douglas to hold off another American try. That was for naught as when Canada got the ball back, John Moonlight was called on a forward pass, which eventually led to the Americans going back on the attack. Baker was the beneficiary, getting the Americans’ second try before Madison Hughes converted. The US led 14-5 at halftime.

Canada got right back in it at the start of the second half. A mazy run from Lucas Hammond led to an opportunistic Harry Jones try. Hirayama however, missed the conversion again and Canada trailed 14-10.

With less than three minutes to play, Matt Mullins put Canada ahead when Fuailefau found him cutting up the right with only one man to beat. Yet another missed conversion meant Canada’s lead would only be 15-14.

Hirayama – after three missed conversions – got redemption by blocking an American clearance from Hughes, picking up the loose ball and running it in for his first try of the match. His next conversion attempt was good and Canada led 22-14.

Alex Schwarz scored the final try of the match for the Americans with good work again from Baker, but it was too late for the US as the final whistle put Canada on bronze in a 22-19 final.

On its way to the bronze medal match, Canada won pool clashes with Fiji and Japan, while narrowly losing to New Zealand 19-14 on Saturday in order to advance to the cup quarterfinals on Sunday.

The Canadians mauled Argentina 28-7 in the quarters, but England proved too much on home soil in the semifinals, halting the Canadian run with a 24-5 rout.

The 2016-17 series sees Canada finish in eighth place overall with South Africa taking the title, followed by England and Fiji. The other federations ahead of Canada this season were New Zealand, United States, Australia and Scotland.

Canada was one of just five nations to win a 2016-17 series title, along with South Africa, England, Fiji and London Sevens winner Scotland. The series spanned 10 cities on five continents starting in December.