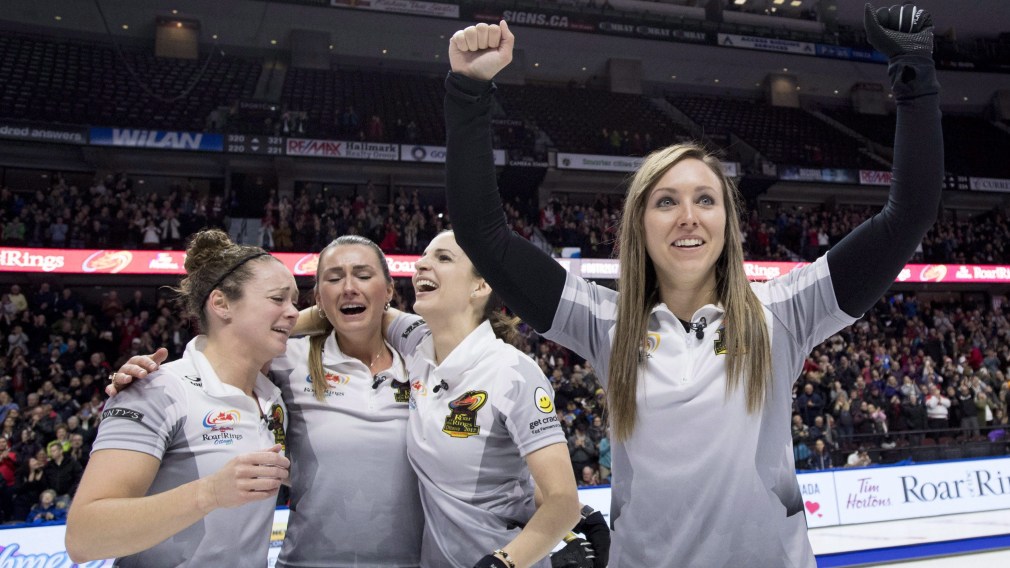 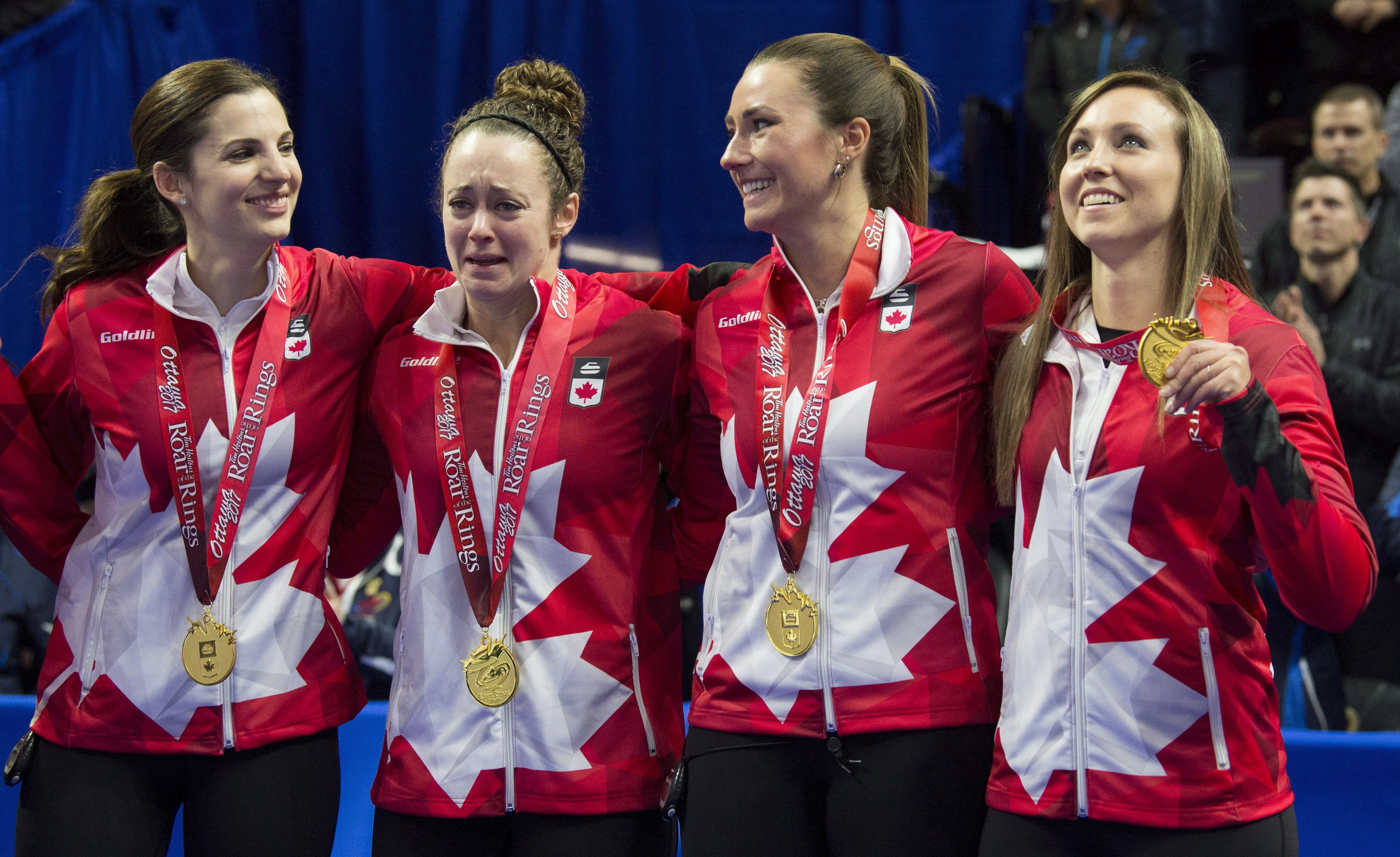 Skip Rachel Homan, from Ottawa, Ont. holds up her medal as lead Lisa Weagle (left) and third Emma Miskew (second from right) turn to second Joanne Courtney as she cries on the podium after being presented with their medals following Olympic curling trials action Sunday December 10, 2017 in Ottawa. THE CANADIAN PRESS/Adrian Wyld

“It’s something I never could have even dreamed of when I was little or any of us growing up playing sports. In our hometown, you couldn’t have written a better story and we can’t wait to represent Canada in PyeongChang,” said Homan.

“I should stop crying sometime in the next week or so,” said Courtney.

The moment we trained for and the moment we dreamed of all our lives and to do it in our hometown is beyond special.

Thank you, Ottawa.
Thank you, Canada.
We’re going to the Olympics!!! pic.twitter.com/rKqjnFxty4

The stage was set with both teams having their own competitive advantage heading into the final.

Team Carey, throwing yellow stones, had been the first female team to go through the round robin undefeated and had a bye into the final. However, Team Homan, throwing red stones, had the crowd on their side as the Canadian Tire Centre was filled with chants for a Homan victory. They were also on a win streak, with their only loss coming against Carey in the opening draw of the trials.

Team Homan was able to get an early lead, stealing one in the first end on a Carey missed peel attempt. Carey gave up another steal in the second to put Homan up 2-0.

In the third, Carey was in position to score two, however a hit and roll by Homan forced Carey to take a single, cutting the lead in half.

.@TeamHoman makes the hit and roll on top of a @TeamCareyCurl rock to force Carey to make a hit for the single… and she does! Score after 3 ends is now 2-1 for Homan. #ROTR2017 pic.twitter.com/QbCdI6RgEP

The fourth end looked like it could be a turning point for Team Carey as she sat two. But Homan made a back house tap that, after a measurement, secured the single point to increase the lead to 3-1.

.@TeamHoman makes the hit for the deuce in the sixth end and extends their lead to 5-2 over @TeamCareyCurl. #ROTR2017 pic.twitter.com/x34EBzN3n1

The sixth end proved to be a big one for Homan, who was able score two extending their lead to three. Team Carey responded with a nose hit in the seventh, to once again trail Homan by a single point, making it 5-4.

.@TeamCareyCurl answers back with a deuce on a nose hit. @TeamHoman continues to lead the scoring 5-4 after 7 ends. #ROTR2017 pic.twitter.com/po4pKVfbes

After Carey made a double takeout in the eighth, Homan considered going for two on her last shot, but that would have involved trying to move one of the guards into the rings, so she decided to blank instead.

.@TeamHoman makes the pressure draw against 3 @TeamCareyCurl stones to hang onto the back 8ft for the single. Homan leads 6-4 going into the last end. HERE WE GO, FOLKS! #ROTR2017 pic.twitter.com/7m5tbDwhtB

With the hammer in nine, Homan was facing three yellow stones but came up with a draw that just held on to give her a single and a two point lead heading into the last end.

In the 10th, Carey had last rock and if she could clear both red stones out of the house would tie the game. But one of them stuck around, giving Homan the victory.

Next up on Sunday, 2016 world champions Team Koe will play Team McEwen for an Olympic berth in the men’s event.

Roar of the Rings: Team Homan wins Curling Canada’s Olympic trials
French Open Updates: Eugenie Bouchard continues to perform in Paris
What to expect from Canadian tennis players at the French Open
Shuttlecock and balls: The fastest moving objects in sport
Adventure, culture and food: 9 things Peru is famous for
Katherine Surin: Lessons learned from an ordinary yet extraordinary father