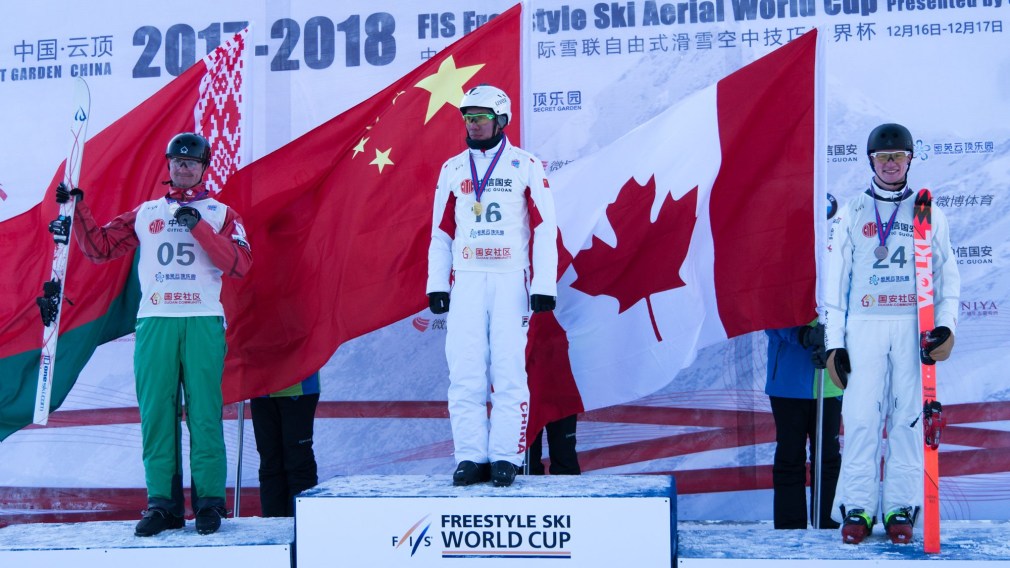 Lewis Irving couldn’t have asked for a better start to the aerials World Cup season as he earned his first career podium finish.

In the six-man second final round in Secret Garden, China, Irving performed a beautiful triple twisting triple flip (known as a full-full-full) to score 103.68 points for the bronze medal. He chose to do a jump with a slightly lower degree of difficulty in that second final, aiming for high execution scores.

“It feels awesome. This is my first podium, so hopefully more to come. It feels great – I am lost for words right now!” Irving said immediately after receiving his hardware. “My strategy for today was to focus jump by jump and stay in the moment, get the scores that I get, and just keep going.”

The 22-year-old Canadian, who was the FIS Freestyle Rookie of the Year for aerials in 2016, had done the more difficult jump in the first final round, advancing to the compete for the medals with a score of 123.01. Irving had only been eighth in qualifying when he also performed the full-full-full.

His teammate Olivier Rochon had actually been third in qualifying, but was unable to advance to the second final when he missed his attempted full-double full-full in the first final, finishing 12th overall.

This was Irving’s 10th World Cup start in what will be just his third full season on the elite international circuit. His previous best result had been a fourth place finish in Deer Valley, Utah in February 2016. He is coming back from an injury that sidelined him for half of last season.

The aerialists will compete in Secret Garden again on Sunday.