💥 An ace from 🇨🇦 @milosraonic seals Canada's victory over Netherlands!

Canada began the weekend on Friday with wins from Raonic and Denis Shapovalov. Raonic played first, claiming victory over Thiemo de Bakker in three straight sets of 6-3, 6-2, 6-2. The last time Raonic played in the Davis Cup was in 2015. 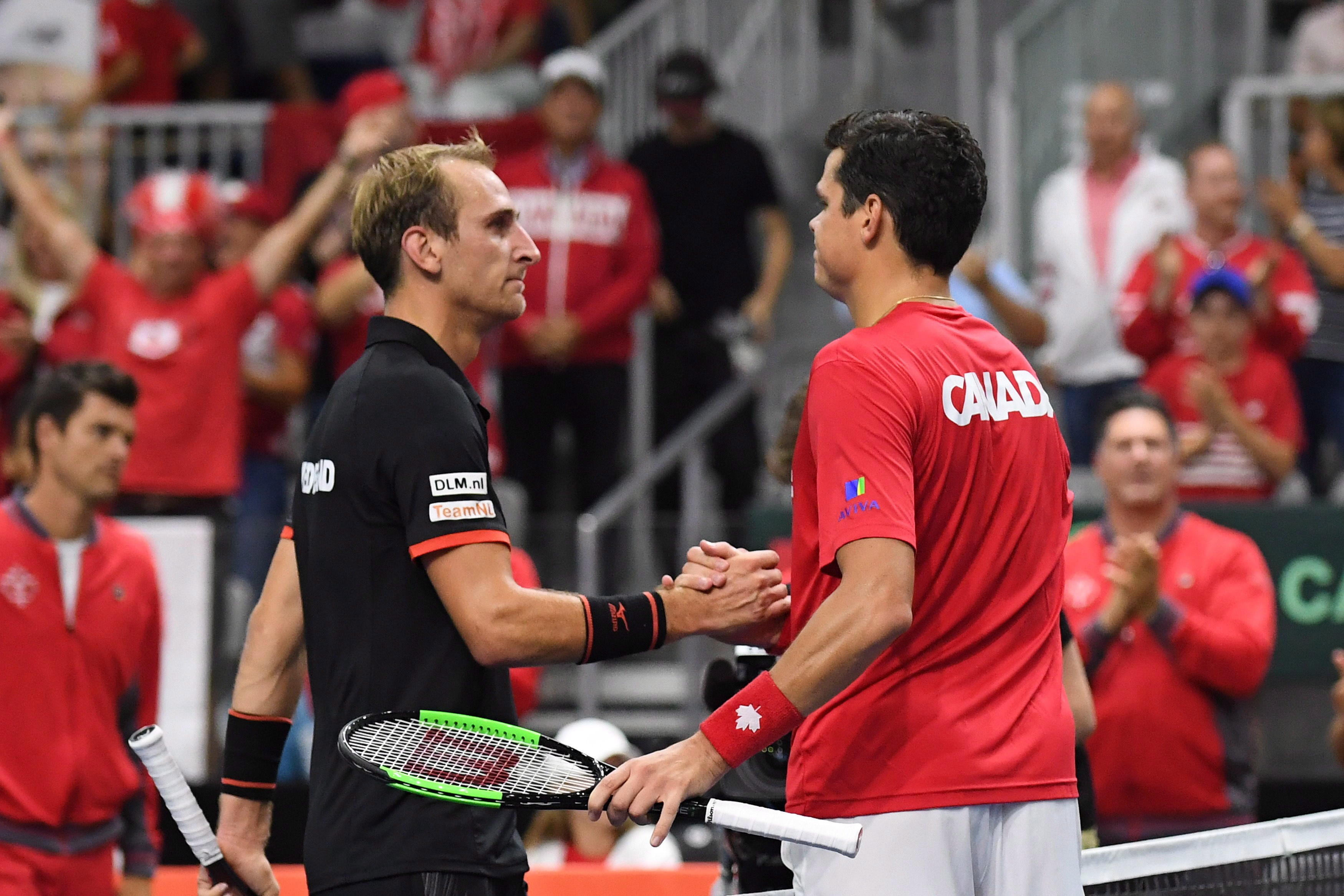 Milos Raonic, right, of Canada shakes hands with Thiemo De Bakker of the Netherlands after defeating him in Davis Cup Cup tennis action in Toronto on Friday, Sept. 14, 2018. THE CANADIAN PRESS/Jon Blacker

Following Raonic was Shapovalov with a comeback win over Robin Haase. Shapovalov lost the first two sets, but came back to win three straight sets, with a final score of 3-6, 3-6, 7-5, 6-3, 6-4. Hasse and Shapovalov have gone head-to-head two times, each winning a game.

The moment you win a five-set #DavisCup epic, a photoessay in four parts 📸 @denis_shapo pic.twitter.com/GQPsj5fMCb

On Saturday, Canadian tennis legend Daniel Nestor played his last career match with Vasek Pospisil in a doubles match against Matwe Middelkoop and Jean-Julien Rojer. The Dutch duo defeated the Canadians in four sets of 6-3, 3-6, 4-6, 4-6.

Nestor has played in 53 Davis Cup ties, the most of any Canadian player. He has a record of 15-15 in single rubbers and a team-best doubles record of 33-13. 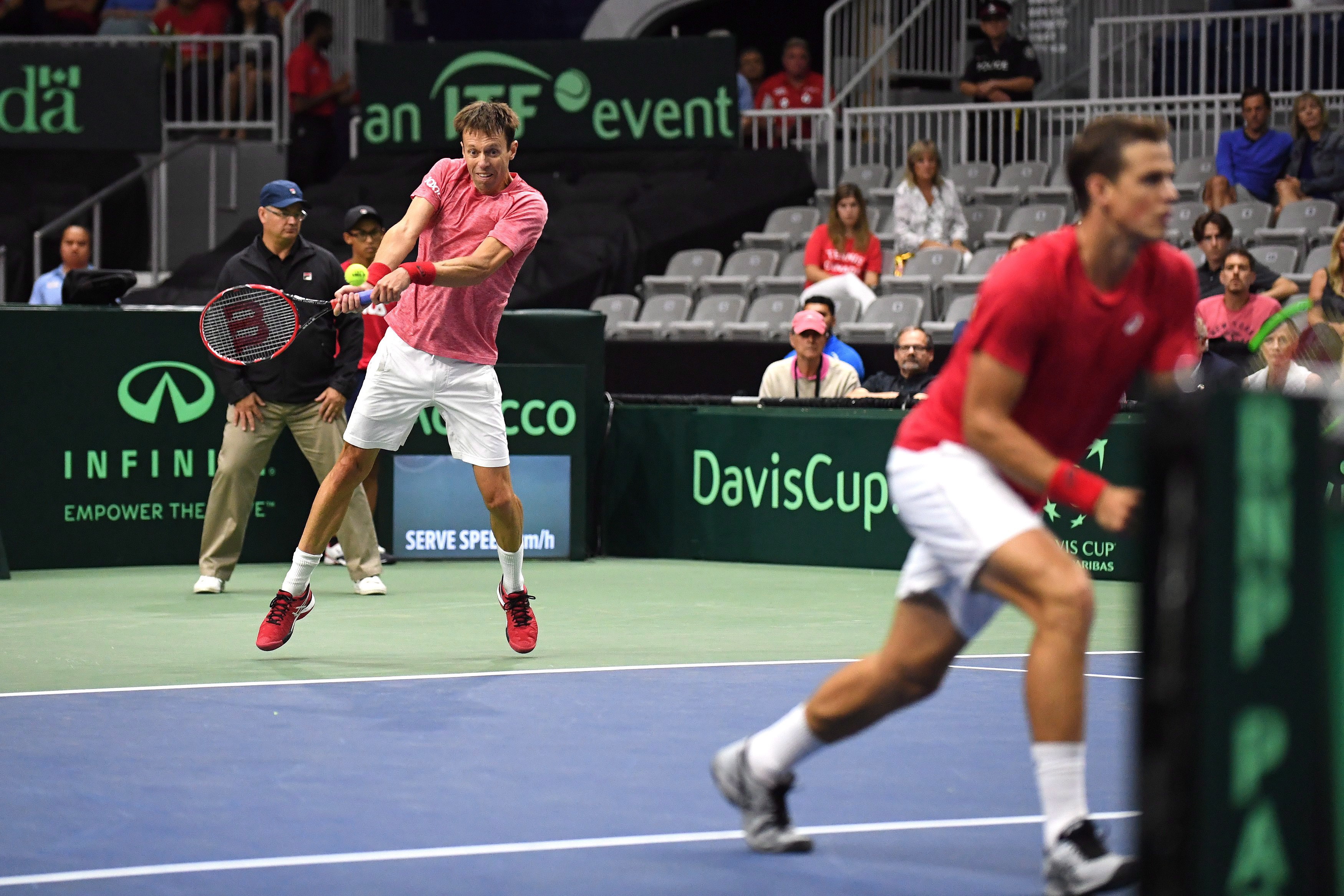 Daniel Nestor, left, with doubles partner Vasek Pospisil, of Canada, returns a shot from Matwe Middelkoop and Jean-Julien Rojer, of the Netherlands, in Davis Cup tennis action in Toronto on Saturday, September 15, 2018. THE CANADIAN PRESS/Jon Blacker

Prior to the game on Sunday, Nestor was inducted into the Canadian Tennis Hall of Fame in an on-court ceremony. Over the course of his career, he won eight Grand Slam doubles titles on the ATP Tour. At the Sydney 2000 Olympic Games, he won gold with Sebastien Lareau. At the Rio 2016 Olympic Games, he came close to the podium with Pospisil, finishing in fourth place.

Canada’s victory over the Netherlands gives the country a spot in the elite World Group for the 2019 Davis Cup. The tournament will be different next year, with teams playing for a week in February for the opportunity to advance to the championship in November. Currently, the Davis Cup format involves matches being played over four weekends during the year.

We have our 1️⃣2️⃣ seeded nations for the 2019 #DavisCupFinals Qualifying Round!

Find out if your nation will play home or away at the #DavisCup draw on 26 September! pic.twitter.com/1vZmlBlTUz

Later this month, there will be a draw to determine where matches will be held for the 2019 Qualifying Round.