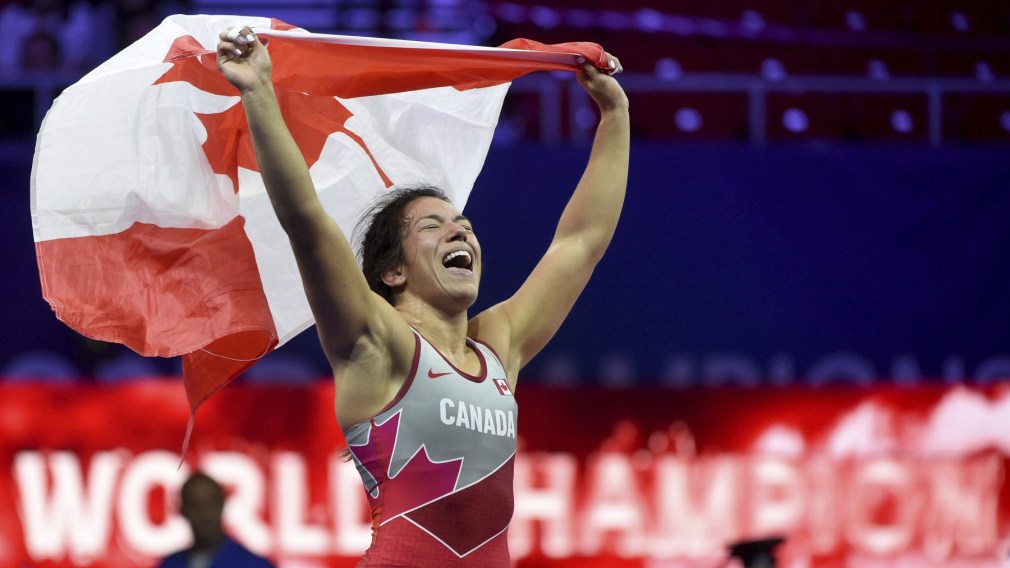 Danielle Lappage added a silver while Erica Wiebe claimed bronze on a record-tying day for Team Canada at the 2018 World Wrestling Championships in Budapest.

Three medals were the most Canada had ever won at a single world wrestling championship and that total was matched in just one night. Canadian women competed in medal matches in all four weight classes that had finals on Wednesday. Here’s how they played out: 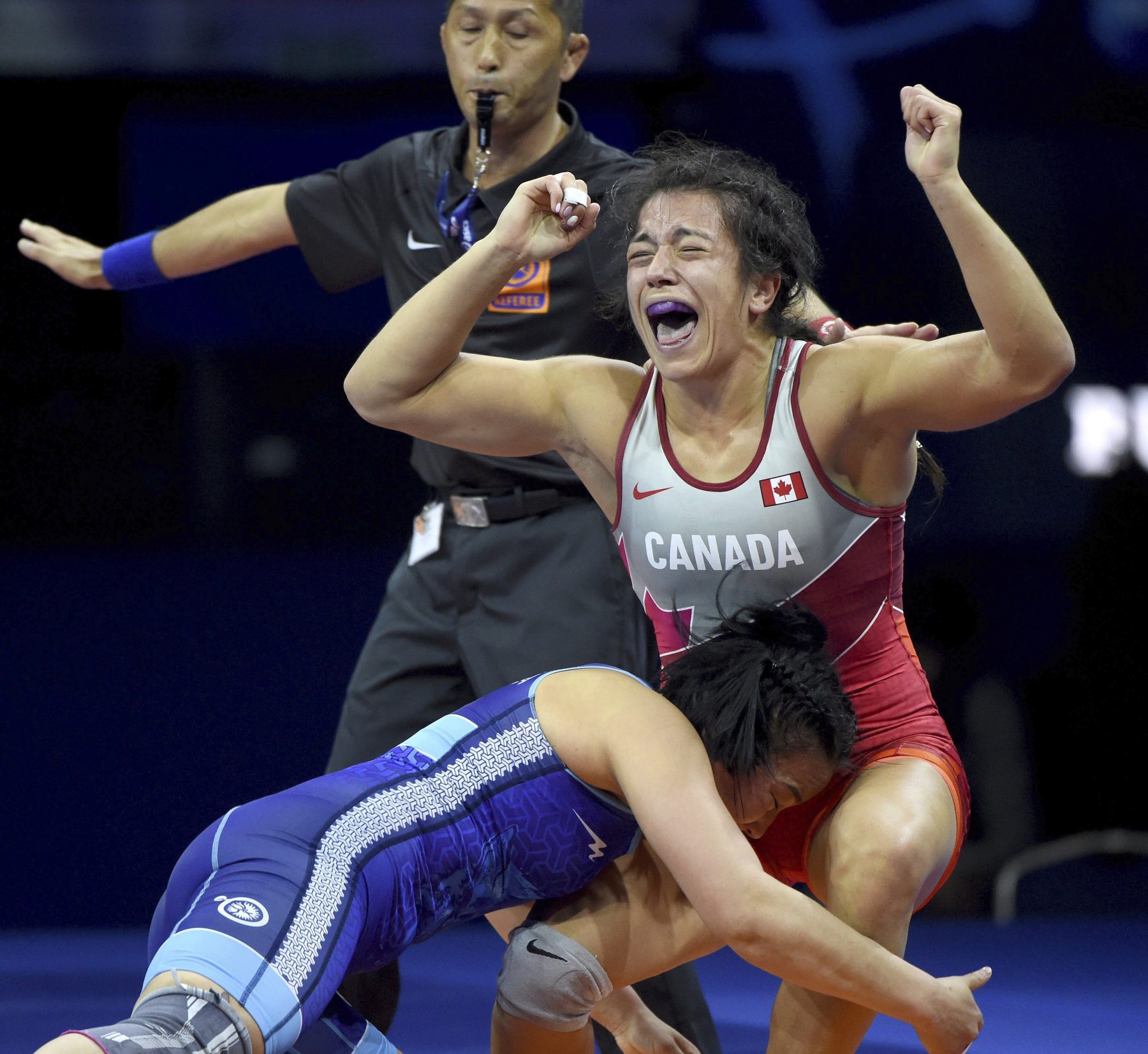 Justina Di Stasio in red of Canada wins against Nasanburmaa Ochirbat of Mongolia in the final of women’s 65kg category of the Wrestling World Championships in Budapest, Hungary, Wednesday, October 24, 2018. (Balazs Czagany/MTI via AP)

Before the match began, Di Stasio had already secured her second straight world championship medal, having won 75kg bronze in 2017. The Canadian got the early lead in the final, scoring two points on a takedown within the first minute of action. That advantage held to the break. Thirty seconds into the second half of the match, Di Stasio got another takedown to put two more points on the board for a 4-0 lead. But her Mongolian opponent quickly cut the score in half, making it 4-2 with two minutes to go. Try as she might, Ochirbat could not get any closer as Di Stasio captured the gold medal. 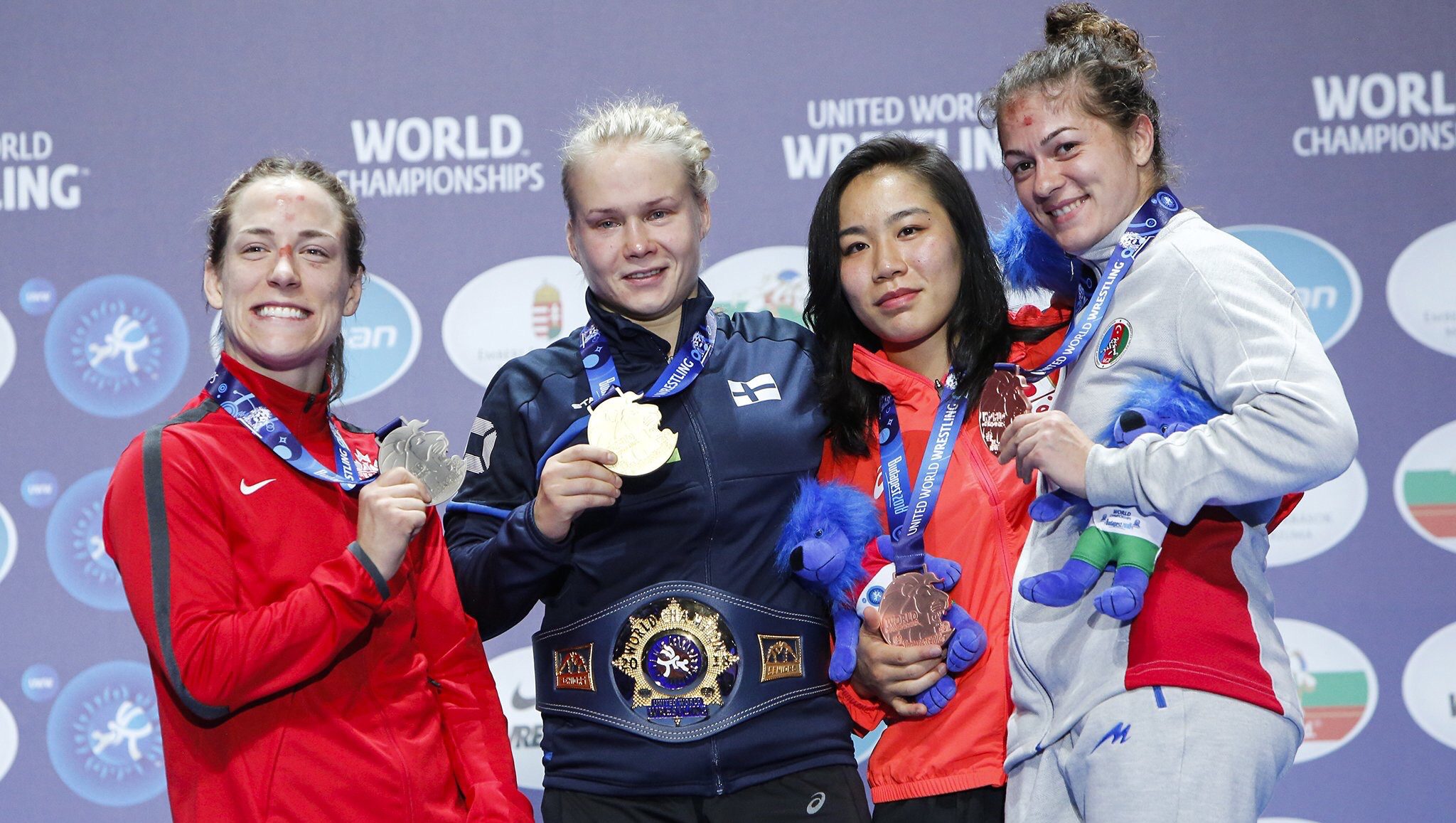 Lappage, who competed in the 63kg weight class at Rio 2016 and won 68kg silver at the Commonwealth Games in April, got on the board first, building up a 3-0 lead. But Olli cut into that lead with a takedown to make it 3-2 at the break. When they resumed, the Finnish wrestler maintained her momentum, taking a 5-3 lead. Lappage was able to tie it at 5 and then, as the clock was running out, Lappage thought she got the takedown she needed to win the gold medal. But on a challenge, the officials reviewed the video and waved it off, giving Olli the 6-5 victory and sending Lappage home with the silver.

.@ericawiebe captured Canada's third medal of the night at the Senior World Championships!

"I wouldn't be here if it weren't for my teammates. Top to bottom, every person on this team I aspire to be like in so many different way."
#BudaWrestle2018 pic.twitter.com/mI7p2Ddgcg

Wiebe, the reigning Olympic champion in the 75kg category, had lost a tight semifinal to eventual world champion Adeline Gray of the United States to be placed in the bronze medal match. She came away with a 4-0 victory to earn her place on her first world championship podium.

In just her second world championship appearance, Di Bacco had earned her way into the bronze medal match via the repechage. She found herself in an early deficit that she was unable to erase completely, dropping a 7-4 decision to finish fifth.

The weight classes at the world championships are different than those contested at the Olympic Games where there are just six women’s events versus the 10 this week in Budapest. Canada now sits second behind Japan and its two gold and two bronze medals in the medal standings for women’s wrestling.

Thursday’s schedule includes medal matches in four more women’s weight classes. Diana Weicker will compete for 53kg bronze while Alexandria Town is in the 57kg repechage to try to win her way to a medal match.