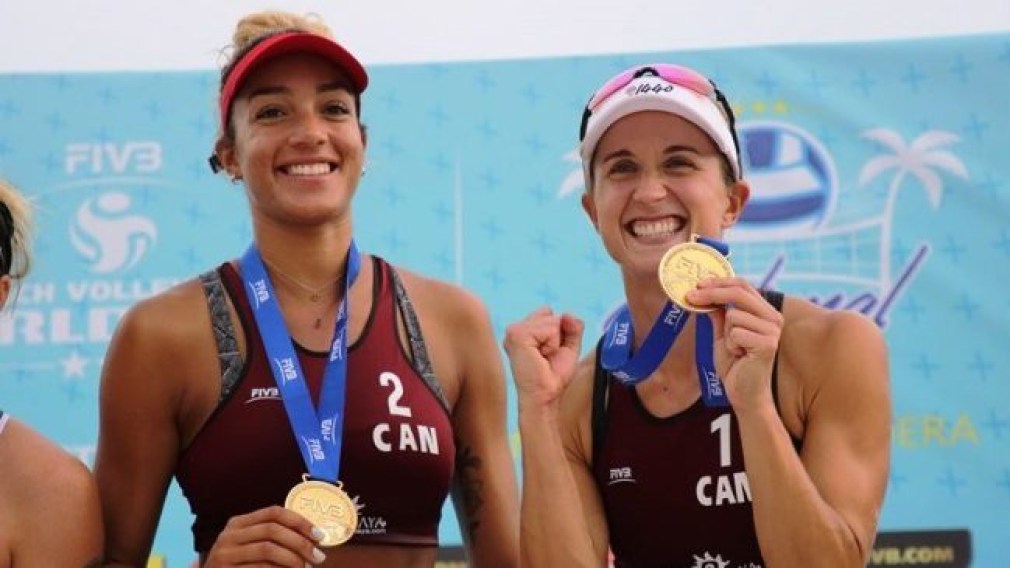 It was another successful weekend for Canadian athletes as they wore the maple leaf proudly on and off home soil.

Here’s what you need to know:

Read: Two medals for Canada at the Track Cycling World Cup in Milton

Take a look at @hugo_barrette's silver medal 🥈 race from yesterday at the Track Cycling World Cup in Milton!

It was a big weekend at home for cyclists competing at the second stop of the UCI Track Cycling World Cup in Milton, Ontario. The tandem of Allison Beveridge and Stephanie Roorda along with Hugo Barrette earned two medals for Canada. Beveridge and Roorda were the first to stand on the podium, finishing the women’s madison (a new Olympic event at Tokyo 2020) in third place. Barrette won Canada’s second medal on Saturday, landing on the podium just behind reigning Olympic champion Jason Kenny of Great Britain in the men’s keirin.

Brandie Wilkerson and Heather Bansley continue to impress with another gold medal at the FIVB Beach Volleyball World Tour three-star Chetumal Open on Sunday in Mexico. This is their second gold medal in as many weeks, following their victory at the Las Vegas Open. Wilkerson and Bansley defeated Americans Caitlin Ledoux and Geena Urango 21-12, 21-13 in the final and are now sitting in second place in the Olympic qualification rankings for Tokyo 2020.

Twins Megan & Nicole McNamara just missed making it two Canadian teams on the podium. They made it to the bronze medal match against Americans Kerri Walsh Jennings and Brooke Sweat but after winning the first set, could not close out with a victory.

Team Canada did not disappoint the home fans at Skate Canada International in Laval, QC, the second event of the ISU Grand Prix Series. Skating their way to the podium were pair Kirsten Moore-Towers and Michael Marinaro who won bronze, Keegan Messing who claimed silver in the men’s event, and ice dancers Piper Gilles and Paul Poirier who climbed from sixth place after the rhythm dance to take the bronze medal.

Team Canada advanced to the women’s team final of the FIG Artistic Gymnastics World Championships in Doha, Qatar with a best-ever fourth-place finish in the qualification round on Sunday. The final will be contested on Tuesday and the top three teams will all qualify their countries for the Olympic team event at Tokyo 2020. Canada’s previous best-ever team result was the fifth-place finish posted by the women at London 2012.

Reigning world silver medallist Ellie Black qualified for Thursday’s all-around final along with Brooklyn Moors. Black will also compete in the vault and beam apparatus finals while Moors qualified for the floor final. Shallon Olsen was the number two qualifier for the vault final, scoring only behind American superstar Simone Biles. World championship rookie Anne-Marie Padurariu will join Black in the beam final.

Weekend Roundup: Team Canada wins medals at home and abroad
What are the differences between baseball and softball?
Shuttlecock and balls: The fastest moving objects in sport
What is the difference between racquetball and squash?
Adventure, culture and food: 9 things Peru is famous for
Korea 101: Korean Customs and Traditions