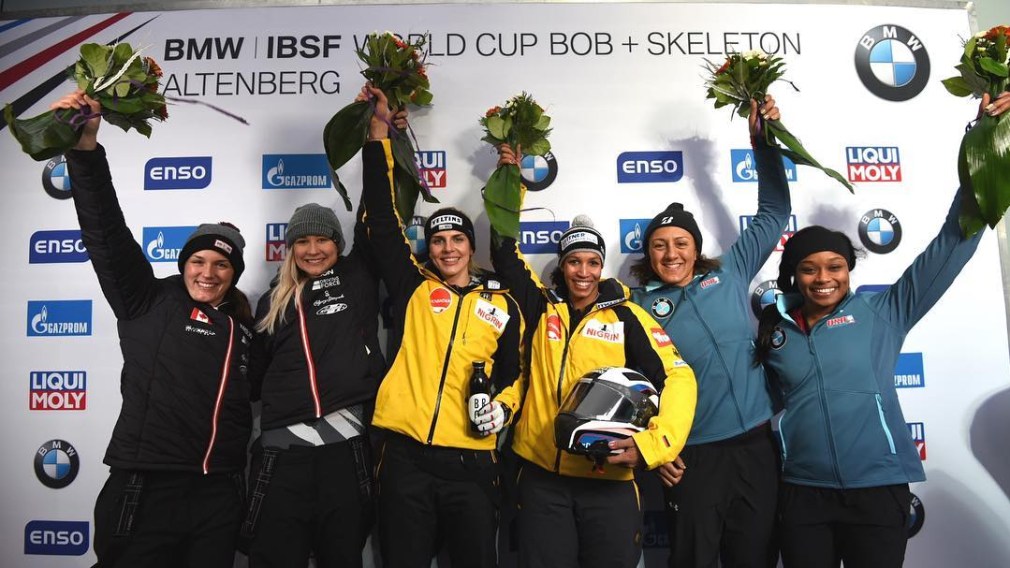 Canada reached the second step of the podium twice on Saturday at the IBSF World Cup in Altenberg, Germany. It was the first World Cup podium for Christine De Bruin and Kristen Bujnowski. Justin Kripps and Cameron Stones also claimed silver.

Competing first were De Bruin and Bujnowski. They finished their two runs with a combined time of 1:57.56, behind Germans Mariama Jamanka and Annika Drazek (1:57.25) and ahead of Americans Taylor Elana Meyers and Lake Kwaza (1:57.64).

RELATED: Sliding sports in 2018-19: Where in the world is Team Canada?

Canadian smiles at the finish in Altenberg, congrats girls with your🥈👏🏼 https://t.co/rv284YZd6z pic.twitter.com/PluWQAJDOi

Also racing was the team of Alysia Rissling and Bianca Ribi, who finished in 10th place.

On the men’s side, Kripps and Stones were in first place heading into the second run of the day. However, in the end their total time of 1:52.56 was beaten by the German team of Francesco Friedrich and Thorsten Margis (1:52.319). Latvians Oskars Kibermanis and Matiss Miknis finished third with a time of 1:52.67.

And it's a silver medal for pilot @justinkripps and birthday boy brakeman @CamStones at #BMWWorldCup in Altenberg.

This is the third stop on the IBSF World Cup calendar for the season. Next weekend’s World Cup remains in Germany but moves to Konigssee.

Bobsleigh: Two silvers for Canada in Altenberg
55 Olympic and Paralympic hopefuls awarded the 2020 Petro-Canada FACE™ grant
Shuttlecock and balls: The fastest moving objects in sport
Adventure, culture and food: 9 things Peru is famous for
Team Canada athletes in acting roles
What to expect from Canadian tennis players at the French Open