The inevitable has finally happened. The record has fallen. Canada’s Christine Sinclair stands atop the world as soccer’s greatest international goal scorer of all time.

Sinclair tied American Abby Wambach’s record when she scored her 184th goal on a penalty kick in the seventh minute against Saint Kitts and Nevis at the Concacaf Women’s Olympic Qualifying Tournament in Edinberg, Texas.

Then, at the 23′ mark, she scored her 185th goal to become the new leader in all-time international goals.

After reaching the 180-goal plateau in April, Sinclair had been within striking distance of American Abby Wambach’s record of 184 goals for the better part of 2019. It was only a matter of time before Sinclair reached that elusive No. 185.

Christine: History is made. Your victory is our victory. We celebrate with you.
And to every girl coming up in the Pack with a dream to achieve that which doesn’t yet even exist: We believe in you. Your Pack is with you. And history awaits you.@sincy12 https://t.co/rNxjjpV7tZ pic.twitter.com/xkUjLtNXHn

Let’s take a look at the remarkable numbers that highlight Sinclair’s record-breaking journey: 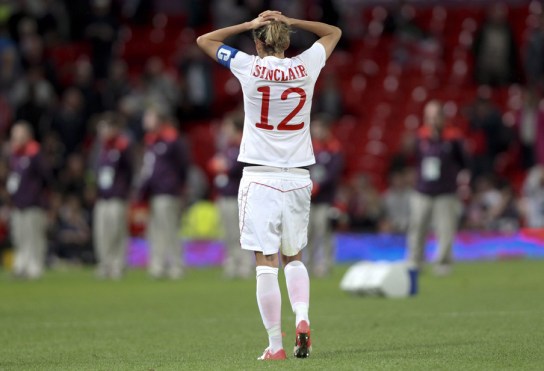 16 – Sinclair was 16 years and 9 months old when she made her national senior team debut in March 2000. She scored her first goal two days later against Norway at the Algarve Cup.

288 – Sinclair is Canada’s all-time leader with 288 caps and is the most capped active player in women’s international soccer.

14 – The number of times Sinclair has been named Canada Soccer’s Women’s Player of the Year.

2012 – The year Sinclair won the Lou Marsh Trophy as Canada’s athlete of the year, becoming the first soccer player to earn the award.

2013 – The year Sinclair was inducted into Canada’s Walk of Fame. 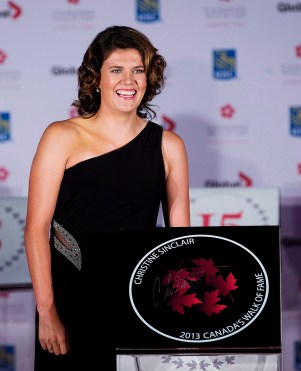 1 – Along with American Alex Morgan and Australian Steph Catley, Sinclair became one of the first women to be featured on the cover of a FIFA video game in 2015.

3 – Canada’s best-ever finish at the Olympics was third place, which they accomplished in back-to-back games at London 2012 and Rio 2016 while captained by Sinclair. 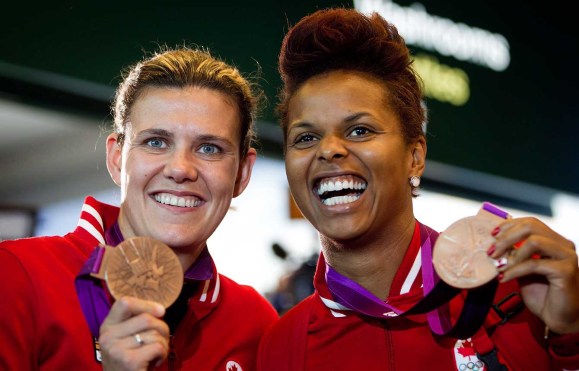 5 – Sinclair announced herself on the international scene with a five-goal performance against England at the 2002 FIFA U-19 Women’s World Cup in Edmonton. Finishing with 10 goals in total, she was awarded the Golden Ball as tournament MVP.

6 – The record for goals scored in a women’s Olympic soccer tournament, set by Sinclair at London 2012. She scored two against South Africa, one against Great Britain, and capped her tournament off with a hat trick against the United States in the semifinals. 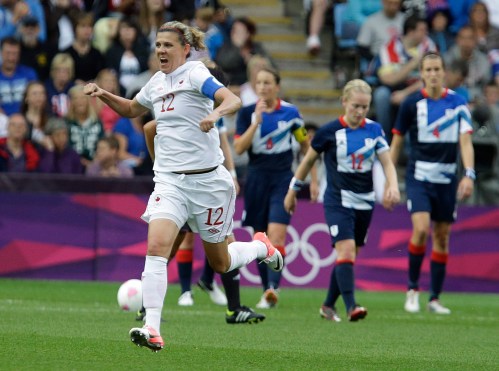 11 – The number of hat tricks Sinclair has scored for Canada at the senior level.

43 – With 43 goals Sinclair leads her club team, the Portland Thorns of the National Women’s Soccer League, in all-time scoring.

20 – Sinclair is in her 20th year with the Canadian women’s national team.

Now 36 years old, how much longer Sinclair can continue to play at the highest level is anyone’s guess, but we do know that she intends to suit up for Canada once again at the 2020 Olympic Games. The Canadian women will be eyeing a podium finish and bounce-back performance in Tokyo after an early exit in the Round of 16 at the 2019 FIFA Women’s World Cup.

The national team has seen steady development since their bronze medal finish at the 2016 Olympic Games, climbing as high as fourth in the world rankings. As of September 27, 2019, they sit seventh in the world and, once again under Sinclair’s leadership, they’ll have something to prove at Tokyo 2020.

Christine Sinclair is the most successful soccer player to ever compete for Canada and a two-time Olympic bronze medallist.