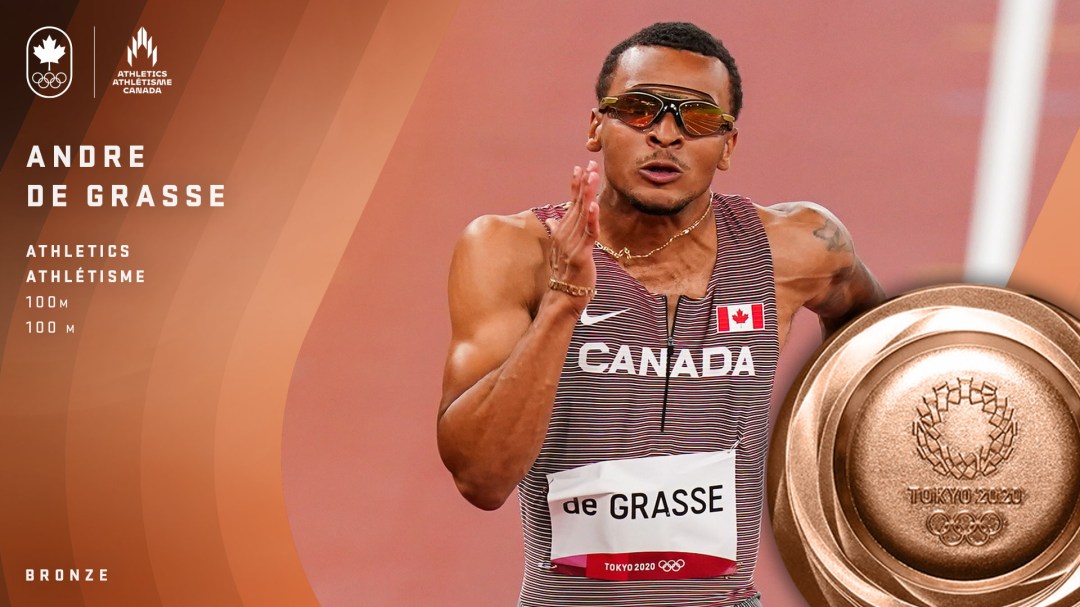 Andre De Grasse has followed up his Rio 2016 bronze with another Olympic bronze in the 100m at Tokyo 2020.

He ran a personal best time of 9.89 seconds in the final to finish behind Italy’s Lamont Marcell Jacobs (9.80s) and American Fred Kerley (9.84s).

De Grasse is the first Canadian to win multiple Olympic medals in the 100m. It is Canada’s seventh Olympic medal all time in the men’s 100m.

Before De Grasse could take to the start line in the final, he first had to get through the semifinals. In the first heat of the night, he crossed the line 0.02 of a second behind Kerley, who ran a 9.96s. By finishing second in the heat, De Grasse was an automatic qualifier for the final. His time of 9.98s ranked him seventh among the eight men who would race for the medals. China’s Su Bingtian and American Ronnie Baker led the way, having both ran 9.83 seconds in semifinal three.

De Grasse lined up for the final in lane 9, the same in which he had run in the first round heats the night prior and came within 0.01 of his previous personal best, with a heats-leading time of 9.91s.

The final was marred by a false start to Great Britain’s Zharnel Hughes, who was disqualified. Once the men got off clean, it was Jacobs in lane 3 and Kerley in lane 5 who got out in front as De Grasse beat out South Africa’s Akani Simbine to the line.