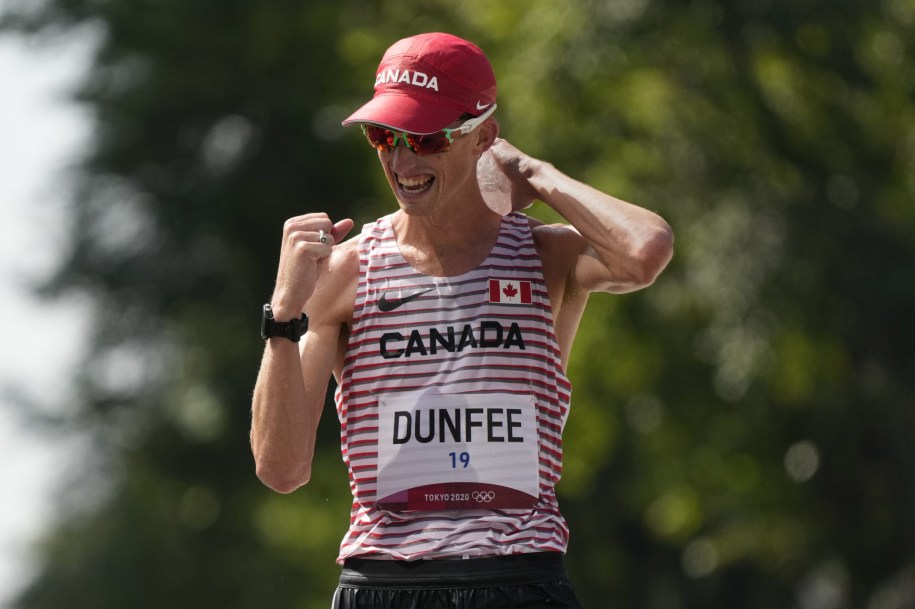 Evan Dunfee knew about the heat coming into the Tokyo 2020 Olympic Games.

He knew how it affects each athlete differently and, more importantly, how it affects him. He prepared for it with one of the country’s top sports science experts, Trent Stellingwerff. Now, the race walker from Richmond, British Columbia, has conquered it, claiming bronze in potentially the last ever men’s Olympic 50km race walk.

Almost two years ago, the organizing committee decided to shift the race walks and marathons out of Tokyo to Sapporo on the northern island of Hokkaido because of concerns about hot and humid conditions this time of year.

But approximately 600km north of Tokyo, the heat persisted and so did Dunfee. The race might have been on the other side of the world, but after clocking a time of 3:50.59, Dunfee raised his hand and gave out a celebratory cry that could probably be heard across Canada.

“To have it hot, to have it humid, It’s what I wanted. It still sucks, it’s really hard, but I know I perform well in these conditions, I just knew.”

Dunfee had done what he could only dream about until today and his smile said it all.

“I don’t need a medal to validate myself. I’m proud of what I accomplished today but, god I’ve been dreaming of this medal for 21 years, I’m just over the moon, just so pumped,” he said.

Staying near the head of the pack from the start, Dunfee climbed his way into the lead chase pack at the halfway mark and maintained it until the end of the 50-kilometre competition.

With just under 10km to go, the push for the podium was on, with the chase group diminishing to just five attempting to catch race leader Dawid Tomala of Poland. When it looked like Dunfee had dropped from the chase pack, the 30-year-old Canadian stormed back from fifth place, passing Marc Tur of Spain in the final steps of the race to solidify Canada’s first Olympic 50km race walk medal.

Asked about his finish, Dunfee could only chuckle as he admitted his late push has become something of a habit in his races.

“I make these 50Ks exciting, apparently. I leave it late.”

“My body gave me everything today, that’s all I could have asked for,” said Dunfee. “Coming around that last bend, I asked for just a little bit more, thinking about my parents, my friends back home, thought about my nanna who isn’t here walking every step with me, but I know she would’ve been, and if you believe in that sort of thing, she probably is,” reflected Dunfee.

“She always told me, ‘Wings on my feet’ and I just asked one more time my body to give me everything it had and it said ‘okay I’ll give you a little bit more.’ I was able to dig deep and do that.”

Dunfee made an inspiring show of sportsmanship at Rio 2016, settling for his fourth-place finish after he chose not to appeal the reinstatement of Japanese bronze medallist Hirooki Arai. Dunfee looks back on that moment where he showed to himself, and the world, that he isn’t defined by wins or losses and it’s something that he’s shared with schools all across British Columbia.

“For me to have that story, to have that one moment that I can relate to and use as a crux to explain that journey of sport and inspire one or two people to live the magic of sport, that’s really cool” said Dunfee, who also thanked thanked his coach of 21 years, Gerry Dragomir.

“I’ll never regret that moment, it’s given me so much but certainly getting this one, it means a lot.”

Fellow Canadian Mathieu Bilodeau, who Dunfee waited for with open arms at the finish line, finished the 50km race walk with a season-best 4:20:36, 45th overall.

It has already been announced that the 50km race walk will not be included on the Olympic program three years from now at Paris 2024, a decision Dunfee has opposed vocally. Becoming the last bronze medallist in a brotherhood dating back almost nine decades, Dunfee recognized his moment as “bittersweet”.

“I know I’m not going to ever get this chance ever again. But I seized this one and I took away what I could and left every ounce of me on that race course today and that’s all I can ask for.”