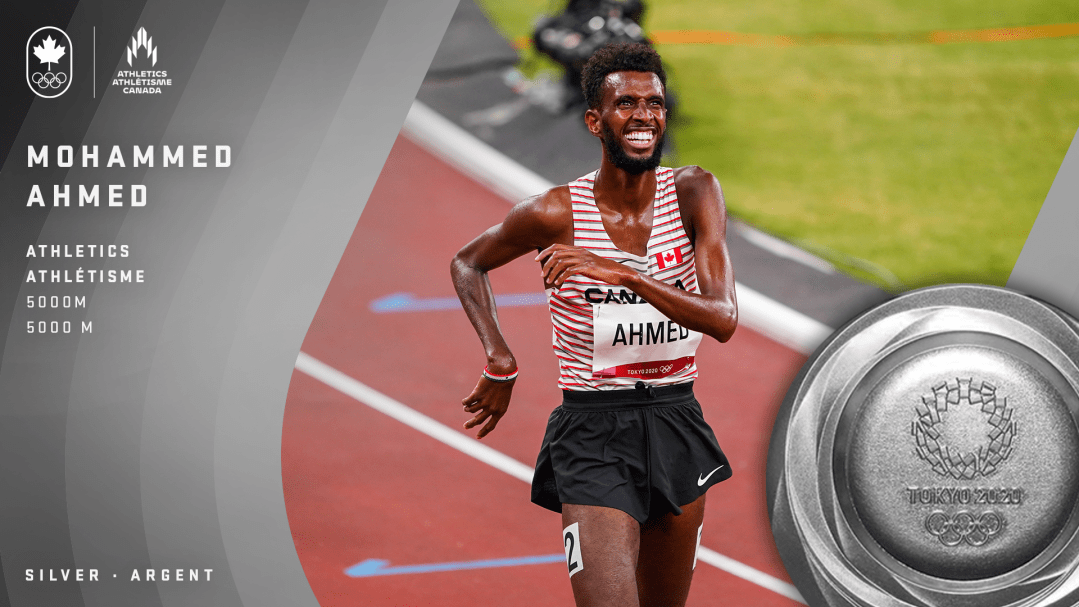 In the early going, Ahmed settled in near the front of the pack, right behind teammate Justyn Knight. With 1000m and 10 laps to go, Ahmed was in eighth, but keeping good pace. As they hit the 2000m mark, Ahmed continued to run in the middle of the pack. At about the midway mark, he shifted to the outside to make a move up towards the leaders.

With four laps to go, the pace began to pick up. Ahmed continued to keep himself tight to the leaders. As they hit the bell lap, Ahmed was in sixth but quickly decided it was time to start his sprint. As they came around the last bend, he was in fourth but then came up the inside to go past American Paul Chelimo and then Kenyan Nicholas Kipkorir Kimlei to get himself into second and claim the silver behind gold medallist Joshua Cheptegei of Uganda.

Ahmed’s time was 12:58.61, putting him 0.46 behind Cheptegei. Chelimo came in for the bronze while Knight finished in seventh place for an impressive Olympic debut.

Ahmed came to Tokyo with the third-fastest time in the world this year in the distance. He won bronze in the 5000m at the 2019 World Athletics Championships for Canada’s first ever medal in a long distance track event at the biennial global competition.

Ahmed set the Canadian record at 12:47.20 in July 2020, in just his second race after competitions resumed following the outbreak of the COVID-19 pandemic.

Ahmed had recorded Canada’s best ever Olympic result in the 5000m at Rio 2016 where he finished fourth. He finished sixth in the 10,000m earlier in the Games for Canada’s second-best Olympic result ever in that event.