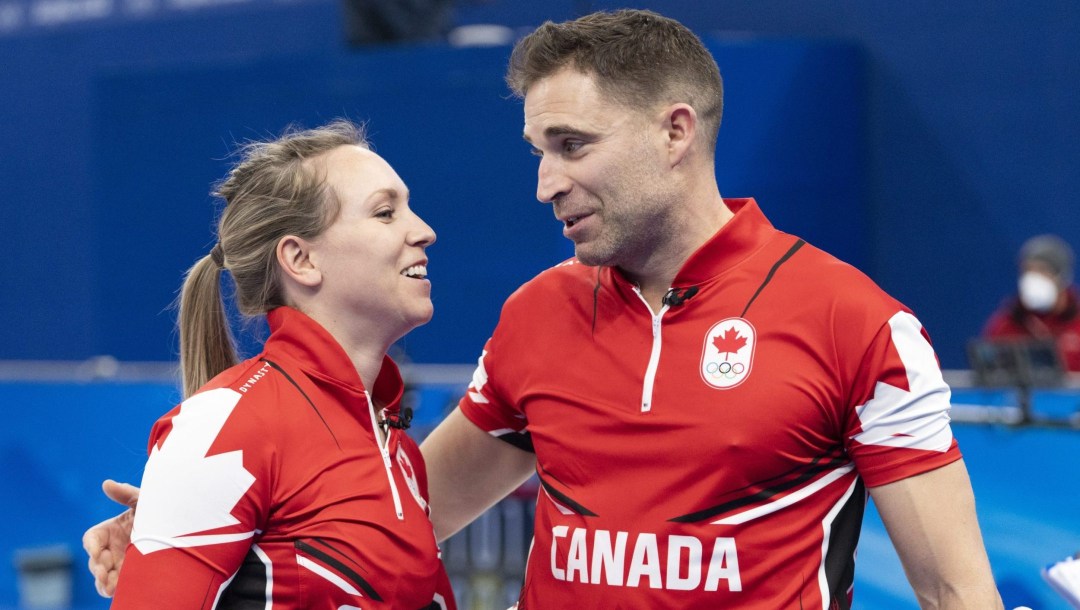 A seventh-end gamble that paid off and back-to-back critical shots in an extra end allowed Canada to escape with a 7-5 win over the Czech Republic. That keeps Canada in the thick of the battle for a playoff berth in mixed doubles curling at the 2022 Olympic Winter Games.

The win improved the record for John Morris and Rachel Homan to 5-2 and moved them into a second-place tie with Great Britain. With two games remaining, Italy tops the standings at 7-0 with Sweden at 5-3 and Norway at 4-3 still in the playoff chase.

The 10-team round robin wraps up on the morning of Day 3 with the top four teams moving on to the semifinals that evening in Beijing.

“That was a gutsy, gutsy effort. Absolutely the most dramatic ending I’ve been part of,” Morris said of the final ending. “Just a roller-coaster … we had to hang on and finally got a break in the extra end. And my partner made some brilliant shots when we needed her.”

Morris convinced Homan to concede a single in the seventh to keep the hammer, although they would then trail by two, 5-3. Homan, seeking a medal that eluded her four-person team in 2018, didn’t have an easy shot for two so went along with the decision.

It did eventually pay off, but it took a perfect, last-rock draw by Homan to score two in the eighth to force the extra end where Canada stole the winning points. Homan barely got her shot off in the eighth before time ran out.

“Just an unbelievable game,” she said. “I couldn’t see the clock and all I could were the second digits. I assumed it said 14. When it hit two (John) said go, go, go so I assumed it was two so I let it go as quick as I could.  That was pretty nerve-wracking.”

Morris and Homan both made pressure-packed, must-make shots in the extra end to put Canada in a good position going into the final two stones. Homan came through with her final stone again, this time tapping back a Canadian stone to shot on the button that left Zuzana Paulova an extremely difficult run back try that failed.

Neither team could manufacture anything more than singles through the first four ends, leaving them tied 2-2 at the break. They both had chances for multiple scoring ends but some key draws by Homan and Paulova kept the scores to single points.

Typical of the first half was the fourth end. Both Morris and Tomas Paul missed early shots that could have set up the end for either team, but then both made tough double take-outs. The best chance of the half for more than one came when Paulova’s try for a double got only one and left Homan with a hit-and-stick for the deuce. But Homan was narrow, her shooter rolled out and Canada settled for one.

While Morris continued to have his issues with weight, communication — one of the vital elements in mixed doubles curling — became especially important in calling the sweeping of stones. At times there have been differences between Morris and Homan but the constant chatter back and forth on weight and line enabled the pair to save the majority of what could have been costly Morris misses.

“We’ve worked really hard on our communication because that’s the one thing you always have to work on in mixed doubles,” said Morris. “We feel very good about that.”

As does coach Scott Pfeifer who said it was “great to see the communication and the flow between John and Rachel improve.”

A good example came in the fifth when Homan’s quick call and the power of sweeping by Morris set up Canada for the game’s only steal. Homan’s tap back was light out of her hands and she yelled at Morris who instantly got on the brush. His work got the stone where it needed to be and it took a last-rock shot by Paulova to cut Canada’s steal to a single point.

The Czechs took the lead in sixth, using their powerplay advantageously to score the game’s first deuce for a 4-3 edge.

Team Canada’s final two games have an interesting contrast. Next up is winless Australia, the team that John Morris was coaching before the Games, followed by unbeaten Italy in their final round-robin game.

Early Sunday it was announced the Australians were heading home after Tahli Gill tested positive for the second time. She had also tested positive before the Games began. The Medical Expert Panel examined her PCR tests and determined they fell into an acceptable range and the duo would be allowed to continue.