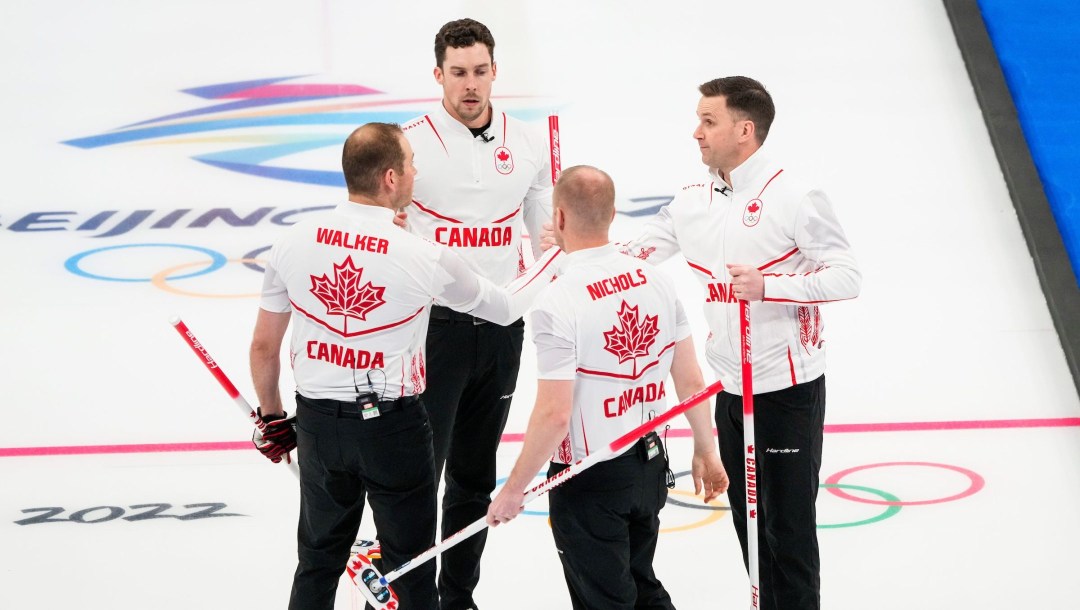 Talk about a bounce back.

The turnaround from a poor performance a day earlier began before the game got started, when Gushue won the pregame draw to the button that determines hammer in the first end. That has been a surprisingly difficult chore for all three Canadian curling teams here.

Having won it, Gushue couldn’t initially take advantage of it. A heavy runback double by Shuster killed the first end for Canada and forced Gushue to draw for a single. But it was only a temporary setback. Gushue and teammates built the second end to where Shuster, having missed one runback double, was facing four Canadian counters with his final stone. Another runback double try only rubbed a Gushue stone and left Canada to steal four.

“Won the draw to the button, got the lead and then got a couple of breaks in the second end,” explained Team Canada second Brett Gallant. “Brad placed his draws in perfect spots to put a lot of pressure on John. Little fortunate to get steal of four but from then it was just make as many shots as we could. To get a good start against the reigning Olympic champions, that’s important.”

Gushue, the 2006 Olympic champion from St. John’s, Newfoundland and Labrador seeking to get Canadian curlers back onto the podium, had his team in shape for another steal in the third. But Shuster made a long, angled runback to escape with a single.

Shuster had to make a wide draw to the four foot in the fifth to prevent another steal but was on the edge of maybe shaking hands early, trailing 7-1 and unable to muster any offence against Canada.

Figuring the final outcome was inevitable, both teams brought in their alternates after the fifth-end break. For Canada that was Marc Kennedy, who had been scouting and matching rocks for the team.

“To have the opportunity to come in there and try to make some shots, sweep a few and play hard for them, it felt great,” said Kennedy, who won Olympic gold with Kevin Martin in 2010. “It’s been a terrific journey with them, different but satisfying in so many ways, so it felt good to help out anyway I can.”

Turned out the game wasn’t quite decided. Shuster executed a tough in-off double to score three in the sixth and suddenly bounce back into the game. The teams traded singles in the next two ends but there were some tense moments for Canada in the eighth. The U.S. narrowly missed two runback triple tries that could have put them in position for a multiple scoring end. Instead Shuster ultimately had to make a tough draw for a single.

Gushue shot a surprisingly low 57 percent in his team’s 7-4 loss to Sweden Saturday but he shot 94 Sunday – the team shot an impressive 91 percent — with an array of excellent shots, including the game ender, a short come-around tap back to score two in the ninth.

Getting a big lead early can sometimes lead to teams getting complacent and ultimately losing games so the veteran Gushue foursome knew they had to stay sharp.

“We still had to stay focused because of the five-rock rule,” said Gushue. “As you saw in the sixth end it can bite you, but we were able to dial it down a notch. To have this sort of game felt nice, and more so that we were comfortable and confident making shots.”

Shuster, a surprise gold medal winner in PyeongChang in 2018, when he knocked off Canadian Kevin Koe 5-3 in the semifinal and Sweden’s Niklas Edin 10-7 in the final, shook hands as his team lost its third straight game to fall to 2-3. Canada improved to 3-2, tied for fourth with Russia. Sweden leads the 10-team round robin at 5-0 followed by Switzerland and Great Britain at 3-1.