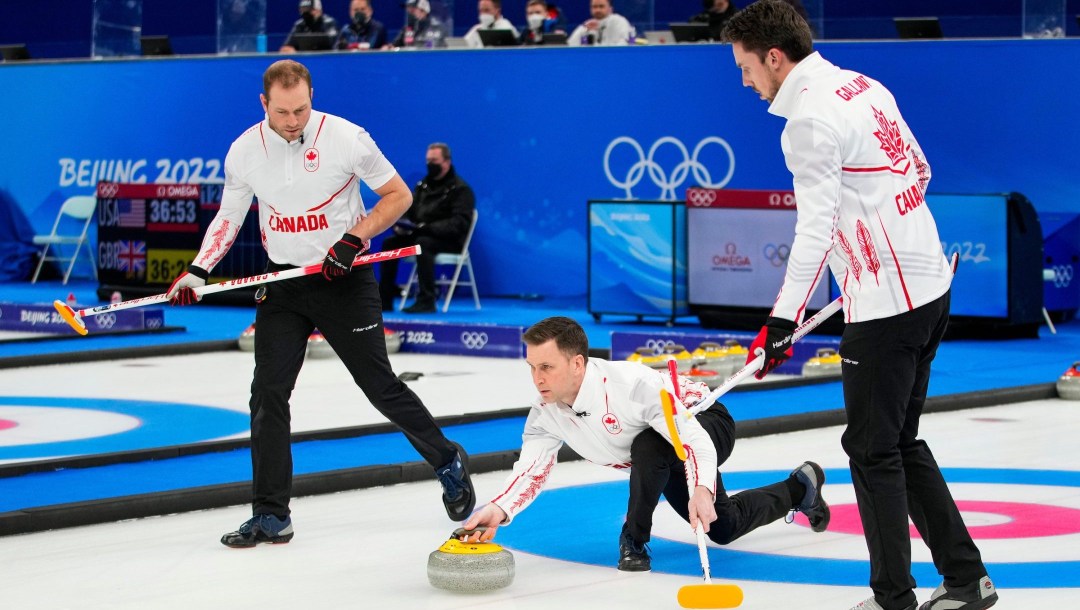 Brad Gushue was part of Canada’s first ever Olympic gold medal-winning team in men’s curling at Turin 2006. Sixteen years later, he returned to Olympic ice at Beijing 2022 and won a bronze medal. That gap between medals is the longest in Canadian Winter Olympic history, something he did alongside his longtime teammate Mark Nichols.

Among his other accomplishments, Gushue has won four Brier titles — tied for the most all-time by a skip — as well as a gold and two silver medals at the world championships.

Gushue made his Olympic debut as a 25-year-old. Prior to the 2005 Canadian Trials, his Newfoundland-based team of Mark Nichols, Jamie Korab, and Mike Adam recruited veteran Russ Howard – a two-time Canadian and world champion skip – to bring experience to the young squad. Adam volunteered to step out of the main lineup as the team felt that having Howard play full time gave them the best opportunity to win the Trials. With Gushue throwing fourth stones while Howard played second and held the broom in the house, the team upset another decorated veteran, Jeff Stoughton, in the final to earn their ticket to Turin.

At the 2006 Olympic Games, Gushue’s team posted a 6-3 record in the round robin to advance to the semifinals. After a dominant win over Team USA, the Canadians claimed the gold medal with a blowout 10-4 victory over Finland. The win was marked by Team Gushue scoring a remarkable six points in the sixth end. Gushue, Nichols, Korab and Adam became the first Newfoundlanders to ever win an Olympic gold medal. In anticipation of the history-making match, schools in the province were closed in the afternoon to allow students to watch.

Gushue made his first of 18 appearances at the Brier in 2003. He has played in every national championship since then, except 2006 when he was at the Olympics. Though he came close to victory a couple of times, including 2007 and 2016 when he was a finalist, Gushue would not claim his first Brier title until 2017 when he did it on home ice in St. John’s, ending a 41-year drought for Newfoundland and Labrador at the national championship.  He and his team of Nichols, Brett Gallant and Geoff Walker went on to win the gold medal for Canada at the 2017 World Championships.

At the Canadian Curling Trials in November 2021, Gushue skipped his team to a 7-1 round robin record and first place in the standings. That gave them a bye to the final, where they defeated 2014 Olympic champion Brad Jacobs and his team 4-3 to become Team Canada for Beijing 2022.

In his second Olympic appearance, Gushue’s team got into the playoffs with a 5-4 round robin record. After a tough loss to the reigning world champions from Sweden in the semifinals, the team rebounded to defeat the defending Olympic champions from the United States 8-5 in the bronze medal game.

Just a couple of weeks after returning home, they competed at the 2022 Brier as a wild card team. After posting a perfect 8-0 record in their round robin pool, they were dealt a blow when Nichols tested positive for COVID-19. Without an alternate, Gushue, Gallant and Walker were forced to compete in the playoffs as a three-man team. They overcame their fatigue and adversity to advance through the 3v4 page playoff game and then defeat defending champion Brendan Bottcher in the semifinal. That put them in the final against four-time Brier champion Kevin Koe where Team Gushue came away with a 9-8 victory in an extra end. Gushue joined Koe and three others with four Brier titles as a skip. Team Gushue went on to win silver at the 2022 World Championships.

Gushue started playing with Nichols in 1998-99. They remained teammates until 2011-12 when Nichols briefly retired then played two seasons with Stoughton in Manitoba. It was also in 2011-12 that Walker first joined Gushue and they welcomed Gallant aboard in 2012-13. Nichols returned to the team in 2014-15, reclaiming his position at third while Gallant moved to second and Walker stayed as lead.

Gushue had enjoyed a great junior career. After winning gold as the alternate for Team John Morris at the 1998 World Junior Championships, Gushue skipped his team that included Nichols and Adam to the 2001 Canadian Junior title and went on to capture gold at that year’s world junior championships. Gushue has 12 career Grand Slam of Curling titles, including the National in 2021.

A Little More About Brad

Getting into the Sport: Started curling in 1993 at age 13… Had dreamed of competing for Canada since watching Calgary 1988 as a 7-year-old… Outside Interests: Business owner (Orangetheory Fitness franchises) and real estate investor… Graduated from Memorial University with a Bachelor of Business Administration in 2004… Was granted an honourary Doctor of Laws degree from Memorial in 2006 following his Olympic gold medal… Enjoys watching movies and outdoor activities (hiking, kayaking, golfing)… Odds and Ends: Had Team Gushue Highway and Brad Gushue Crescent in St. John’s named after him following the 2006 Olympic gold medal…