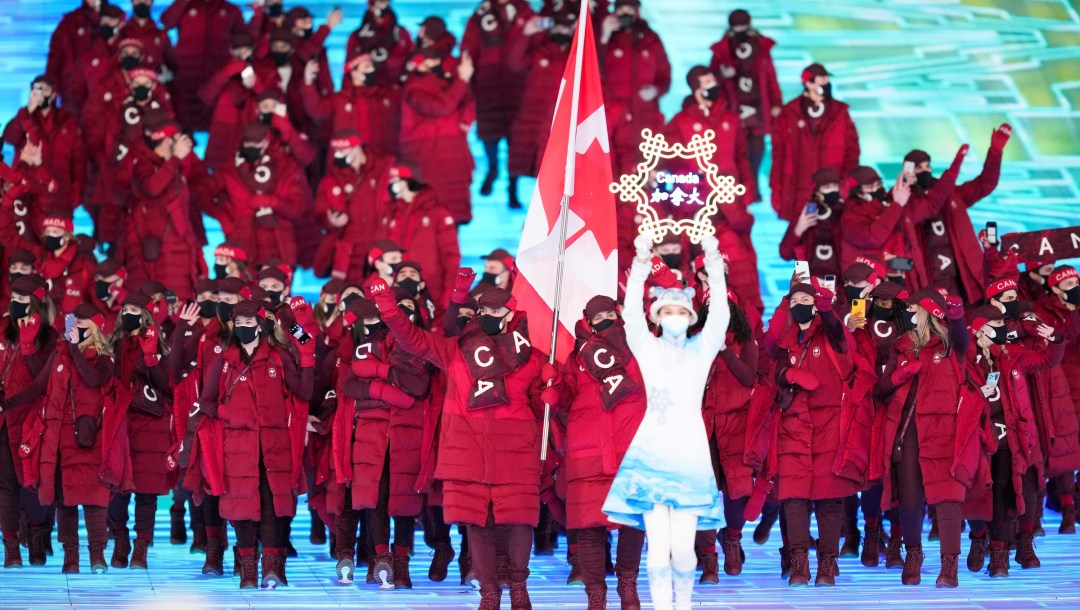 Team Canada was represented by 215 athletes at the 2022 Olympic Winter Games in Beijing. The team included 106 athletes who identified as female or competed in women’s events, the most ever in Canadian Winter Olympic history.

There was also a lot of history made by athletes who contributed to Team Canada’s 26 medals won.

For Hamelin, the gold medal he won with the men’s 5000m relay team was the sixth Olympic medal of his career, which tied him as Canada’s most decorated Winter Olympian and Canada’s most decorated male Olympian. He is the fourth athlete (and first from outside of hockey) to win four Olympic gold medals for Canada. At 37 years old, he became the oldest ever Olympic medallist in short track speed skating and he is also the first male short track speed skater to win a medal in five different Olympic Games.

Poulin became the first hockey player – male or female – to score in four Olympic gold medal games as Canada went undefeated in the tournament. “Captain Clutch” was one of two players on the team – along with Rebecca Johnston – to earn a third career Olympic gold medal and fourth straight Olympic medal.

Among the other outstanding performances on the women’s hockey team were the 18 points recorded by Sarah Nurse as she set a single Olympic tournament record. Brianne Jenner was named MVP after scoring nine goals to match the single Games record. At just 21, Sarah Fillier was second in tournament goal scoring with eight. Ann-Renée Desbiens posted a 5-0 record in net to go with a 1.80 goals against average and a .940 save percentage.

Weidemann won Canada’s first medal of the Games with her bronze in the women’s 3000m. She later added 5000m silver before taking gold in the team pursuit in Olympic record time alongside Ivanie Blondin and Valérie Maltais. Weidemann’s accomplishments resulted in her being selected as Team Canada’s Closing Ceremony flag bearer.

Blondin would go on to win an individual silver medal in the mass start. Maltais became just the third athlete in the world to win Olympic medals in both forms of speed skating after converting from short track in which she won a relay silver at Sochi 2014.

Before being part of the victorious 5000m relay team (which also included Pascal Dion, Jordan Pierre-Gilles, and Maxime Laoun), Dubois won silver in the 1500m and bronze in the 500m. Kim Boutin won her own 500m bronze medal to increase her career Olympic medal total to four.

Canada’s first gold medal of the Games was won by Max Parrot in men’s snowboard slopestyle. For the second straight Games, he shared the podium in the event with Mark McMorris, who won his third straight Olympic bronze. Parrot became a double medallist in Beijing when he captured big air bronze.

That wasn’t the only Olympic debut event in which Canada had success. The quartet of Alexandria Loutitt, Matthew Soukup, Abigail Strate, and Mackenzie Boyd-Clowes won Canada’s first ever Olympic ski jumping medal with their bronze in the mixed team event. The trio of Marion Thénault, Miha Fontaine, and Lewis Irving won their own bronze in the mixed team aerials event. It was Canada’s first Olympic medal in any aerials event in 20 years.

Christine de Bruin drove herself to a bronze medal in the Olympic debut of women’s monobob. Justin Kripps piloted his crew of Ryan Sommer, Cam Stones, and Ben Coakwell to four-man bronze, making him the first Canadian bobsleigh pilot to win Olympic medals in the two-man and four-man events.

Brad Gushue and Mark Nichols returned to the Olympic podium after 16 years, winning men’s curling bronze alongside Brett Gallant, Geoff Walker, and Marc Kennedy. The gap since their gold medal at Turin 2006 is the longest between Winter Olympic podiums in Canadian history.

Mikaël Kingsbury stood on his third straight Olympic podium after his silver medal made him the first male moguls skier to win three Olympic medals.

With her silver medal, Marielle Thompson kept Canada’s podium streak going in women’s ski cross. Canada has won a medal in the event at every Games since it debuted at Vancouver 2010.

The capital city of China hosted the XXIV Olympic Winter Games. This was Beijing’s first time hosting the Winter Games, after previously hosting the Games of the XXIX Olympiad in 2008. The Games officially opened on February 4, continuing through to February 20.

Beijing became the first city in the world to host both a Winter and Summer Games. Beijing is the ninth city overall to host more than one Olympic Games.

Beijing was awarded the right to host the 2022 Winter Games at the 128th IOC Session on July 21, 2015. The Chinese capital received 44 votes to defeat Almaty, Kazakhstan’s 40 votes in the first round. Bids for Oslo, Krakow, Lviv and Stockholm were all withdrawn prior to the vote. Harbin is the only other Chinese city to have previously placed a bid to host an Olympic Games.

Ranked first in the world for total population, China is currently home to almost 1.4 billion people. The majority of this vast population is found in the eastern half of the country, due to the western half’s vast mountainous and desert areas. Beijing, the capital of the People’s Republic of China, is one of the world’s most populous cities, holding an estimated 21,700,000 people.

Despite its vast size, all of China falls within one time zone, which is UTC+8 (13 hours ahead of Eastern Standard Time). The official language of China is Standard Chinese or Mandarin and 91.6% of China’s population is Han Chinese.

The country proclaimed its independence and was established as the People’s Republic of China on October 1, 1949. Today, China is a communist state with 23 provinces, 5 autonomous regions, and 4 municipalities. Xi Jinping has been China’s President since March 14, 2013.

The medals for Beijing 2022 are named “Tong Xin”, meaning “together as one”. They are each composed of five rings and a centre, with the design based on ancient Chinese jade concentric circle pendants. On the front are the Olympic rings surrounded by engravings of ice, snow, and cloud patterns based on traditional Chinese designs. On the back is the Beijing 2022 emblem surrounded by 24 dots for the 24th edition of the Olympic Winter Games. Their positioning resembles a celestial map in honour of the athletes who will aim to shine like stars as they compete for these medals.

Bing Dwen Dwen is the Beijing 2022 mascot. The mascot, whose body is shelled in ice, represents the strength and willpower of all athletes. “Bing”, meaning ice, symbolizes the strength and purity of athletes. “Dwen Dwen” represents children as the mascot serves to promote the Olympic spirit throughout the Games. The cheerful panda embodies unique characteristics of China and the Chinese people. A heart in its left palm represents the country’s hospitality and the colourful halo around its face symbolizes ice and snow sports tracks. The Winter Games mascot also resembles an astronaut that embraces new technologies with its future being fueled with infinite possibilities, much like the potential of the athletes participating.

Evoking fire and ice with its inner red “blazing ribbon” and an outer edge ribbon plated in silver, the torch – named “Flying” – is intended to symbolize how it will bring “light and warmth to the winter sport scene”. The final design by Li Jianye was selected from 182 entries in a global competition. The torch design echoes the cauldron that held the Olympic flame during the 2008 Olympic Games, a way of highlighting the city’s Olympic legacy. The shape of the torch was inspired by the growth of a plant as it reaches out from the soil. Where the red ribbon shows through on the silver is intended to symbolize The Great Wall and the tracks athletes make on ice and snow. On the lower handle of the torch, patterns of auspicious clouds and snowflakes are representative of the Chinese art of paper cutting. The way that two torches can be aligned to pass the flame is symbolic of a handshake of cooperation.

A total of 12 competition venues spread throughout Beijing, Yanqing, and Zhangjiakou were used at the 2022 Olympic Winter Games.

The Beijing Zone included the venues to host Olympic events in curling, ice hockey, figure skating, short track speed skating, long track speed skating, and big air in snowboard and freestyle skiing. It was also the site of the Opening and Closing Ceremonies. The Yanqing Zone held events in alpine skiing, bobsleigh, skeleton, and luge while the Zhangjiakou Zone hosted all other snowboard and freestyle skiing events as well as cross-country skiing, ski jumping, Nordic combined, and biathlon. 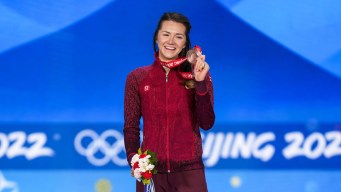