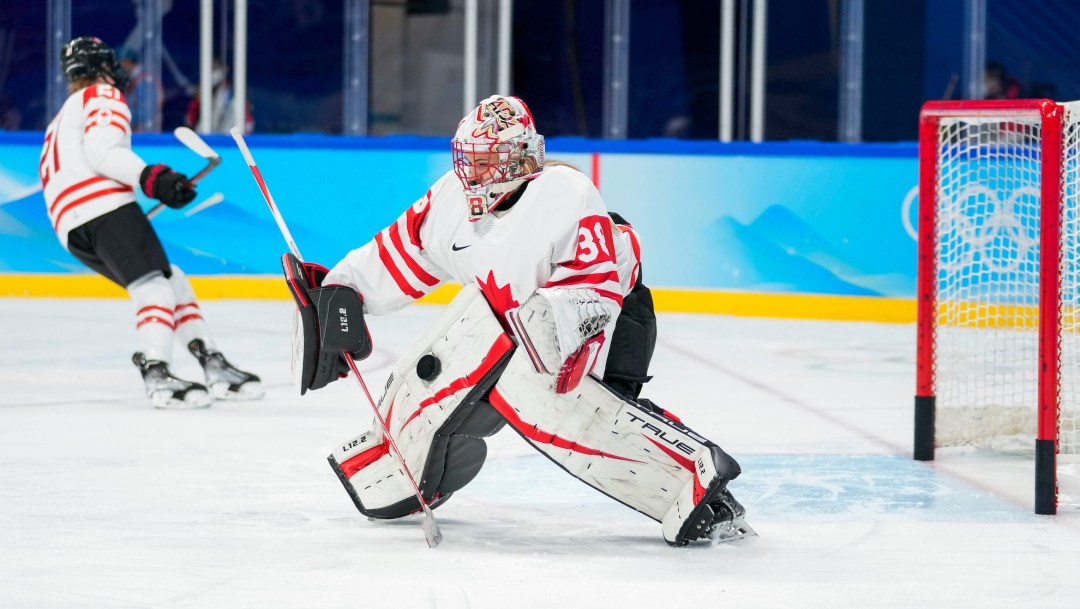 Emerance Maschmeyer made her Olympic debut at Beijing 2022 where she started two games en route to Canada winning the gold medal. Maschmeyer allowed just one goal during her two appearances in net. She recorded a shutout against Sweden in the quarterfinals.

Maschmeyer first joined the Canadian national team program for the 2011-12 season. She won three games at the 2012 IIHF U18 Women’s World Championships, including a shutout against the United States in the gold medal game, as she gave up just one goal in the entire tournament. She then joined the U22 development team before making her National Women’s Team debut at the 2014 Four Nations Cup, winning another gold medal for Canada.

Maschmeyer served as Canada’s third goaltender at the 2015 IIHF Women’s World Championships, winning a silver medal. In 2016, she started three games for Canada at the worlds and was named the best goaltender of the tournament after giving up just four goals. Unfortunately, one of those goals was in the 1-0 overtime loss to the United States in the gold medal game. In 2017, Maschmeyer earned one win at the worlds as she came home with a third straight silver.

After being left off the Olympic team in 2018, Maschmeyer returned to the national team roster for the 2019 World Championship. She played in three games, starting two, and earned a shutout in Canada’s quarterfinal win over Germany. Canada came away with the bronze medal after an upset loss to Finland in the semifinal. She helped Canada bounce back at the 2021 Worlds, earning two shutout victories as they won the country’s first world title since 2012.

Maschmeyer played collegiately at Harvard University, where she finished as the Crimson’s all-time leader in saves. As a freshman in 2013 she was named the Ivy League Rookie of the Year. As a sophomore she was the 2014 ECAC Goaltender of the Year, a Patty Kazmaier Award finalist, and became just the 10th Harvard player ever to earn All-American honours (second team). She ended her career as a three-time All-Ivy League First Team selection (2014-16).

Maschmeyer joined the Calgary Inferno of the CWHL in 2016-17, reaching the Clarkson Cup final but losing to Montreal. She was traded to Les Canadiennes the following season, taking over the starting role after her release from Olympic centralization. In 2019, she made the Clarkson Cup final again, but saw her former team list the trophy. After the league folded, Maschmeyer joined the PWHPA, skating with the Montreal-based team for the 2020 and 2021 Dream Gap Tours.

Before joining Harvard, Maschmeyer played a season of junior A boys hockey in the AJHL with the Lloydminster Bobcats. She even faced off against her brother, Brock, who played for the Fort McMurray Oil Barons, stopping him in a shootout. Maschmeyer was also just the second female goalie to ever play in the famous U10 Brick Tournament in Edmonton.

A Little More About Emerance

Getting into the Sport: Started playing hockey at age 3, became a goalie when she was 7… Played in boys leagues until she got to university… Outside Interests: Graduated from Harvard University in 2016… Attended the Smith School of Business at Queen’s University… Serves as the goaltending coach for Concordia University… Enjoys yoga, hiking, lawn games, being on the lake, and spending time with family… Odds and Ends: Older sister Brittaney played with the U22 Canadian team and in the NCAA with St. Lawrence University and Syracuse University… Older brother Brock played professionally in Germany… Collects mugs from her international competitions… Won gold with Team Alberta at the 2011 Canada Winter Games…