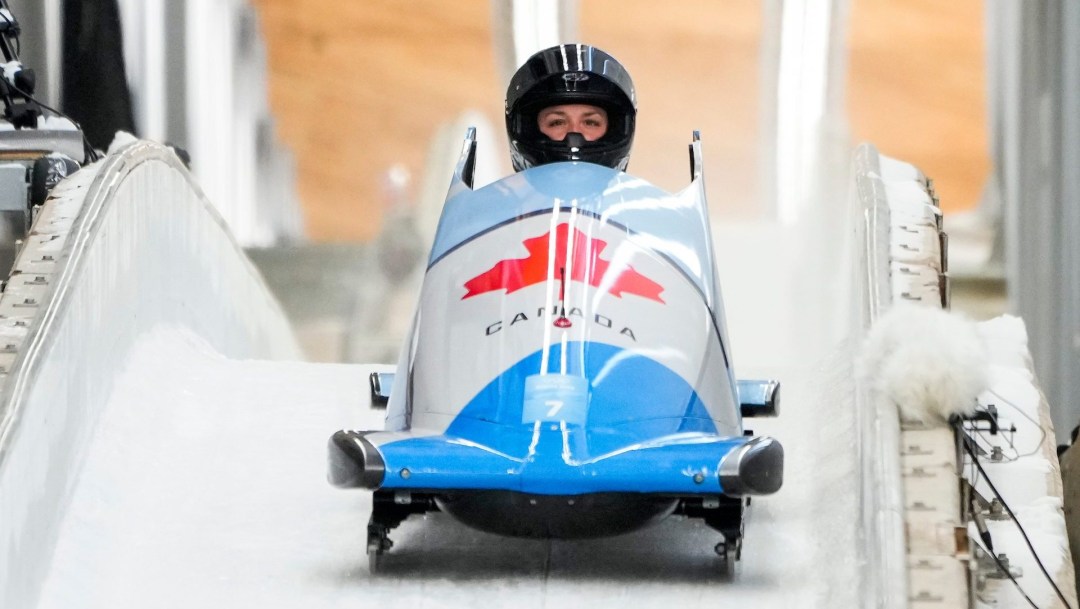 Christine de Bruin won the bronze medal in the Olympic debut of the women’s monobob event at Beijing 2022. She followed up with a fifth-place finish in the two-woman bobsleigh event with brakewoman Kristen Bujnowski.

de Bruin had been representing the University of Alberta in track and field for two years when she decided she was ready to stop competing. Upon hearing this, her coach convinced her to go to Calgary to try bobsleigh, telling her that her chances to make the national team in track were small, but her chances of going to the Olympics for bobsleigh were great. She soon made the development team as a brakeman, immediately taking a leave from school.

A year and a half in, she was redirected from the path of being a World Cup brakeman to a development pilot. Doubting this decision at first, she got all the confidence she needed when she finished fourth in her first North American Cup race in March 2013, less than two months after she started driving. In November 2015, de Bruin won three North American Cup races in a row. It was especially satisfying coming off a year when she was hindered by a bulged disc in her back.

It was during the 2018-19 season that de Bruin began to establish herself as one of the top pilots in the world. She found a great match with Bujnowski and won her first World Cup medal in January 2019 when they took silver on the tricky track in Altenberg. They also won World Cup silver in Lake Placid before capturing bronze at the 2019 World Championships in Whistler.

Their momentum continued into 2019-20 as they won two more World Cup medals and only finished outside the top five once in eight World Cup races. That helped them finish third in the overall World Cup two-woman standings. They capped the season with a second straight bronze medal at the world championships.

Because of the COVID-19 pandemic, the Canadian bobsleigh team didn’t compete in the first half of the 2020-21 season. Bujnowski didn’t compete at all as she recovered from an injury and de Bruin ended up with a top result of fourth place in Königssee. She welcomed Bujnowski back for the 2021-22 season and opened with a bronze medal at the Olympic test event at the Yanqing Sliding Centre. They went on to win four World Cup bronze medals and finish fourth in the overall standings.

It was also in 2021-22 that de Bruin showed what she could do in the monobob, winning gold medals at the World Cups in Altenberg and Sigulda and placing fourth in two other races to finish fourth in the overall monobob standings.

Getting into the Sport: Started competing in bobsleigh at age 22… Outside Interests: Completed two years of a Bachelor of Physical Education and Recreation at the University of Alberta before putting studies on temporary hiatus to pursue bobsleigh… Enjoys riding her motorcycle and paddleboarding down the Bow River… Athlete ambassador for KidSport in Calgary… Drives tour bobsleighs for the public at Canada Olympic Park… Odds and Ends: Husband Ivo de Bruin is the top pilot for the Netherlands… Watching Donovan Bailey win the 100m at Atlanta 1996 inspired her dream to compete for Team Canada… Favourite quote: “It will cost you nothing to dream and everything not to.” – Rodney White…