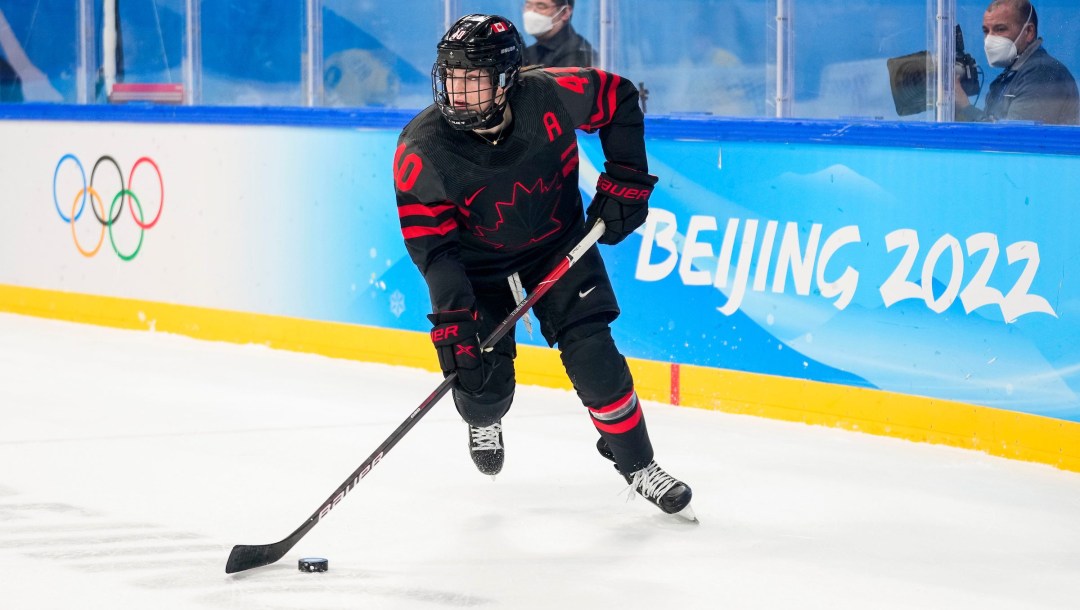 Blayre Turnbull was an assistant captain of the Canadian women’s hockey team that won gold at Beijing 2022. She recorded four goals and three assists in the tournament. Turnbull made her Olympic debut at PyeongChang 2018 where she recorded three assists, including one in the final, as Canada won the silver medal.

Turnbull had made her debut at the IIHF Women’s World Championship in 2016, going on to win back-to-back silver medals with Canada.

In 2019, Turnbull had her most successful individual performance at the world championships, scoring four goals in five games. Canada lost the semifinal to Finland and came home with a bronze medal for the first time in the history of the tournament. Turnbull was named to the roster for the 2020 World Championship that was cancelled because of the COVID-19 pandemic.

A year later she was named assistant captain for the 2021 World Championship, helping Canada to its first gold medal in almost a decade. Unfortunately, Turnbull broke her fibula while celebrating the overtime victory, but came back to the ice on a stretcher to receive her gold medal.

Turnbull played collegiate hockey at the University of Wisconsin. As a freshman in 2011-12, she was the Rookie of the Year for a Badgers team that advanced to the NCAA Frozen Four championship game. She was named captain in her senior season and led the Badgers to the 2015 WCHA Championship while being selected to the All-WCHA first team. After graduation, Turnbull was selected 19th overall by Calgary in the 2015 CWHL Draft and won the Clarkson Cup in her rookie season with the Inferno in 2015-16. Three years later she lifted the Cup again with Calgary. Following the collapse of the CWHL, Turnbull joined the Professional Women’s Hockey Players Association, training with the Calgary-based team and competing in the Dream Gap Tours in 2020 and 2021.

A little more about Blayre

Getting into the Sport: Started skating at age 2 and playing hockey at age 5… Had her Olympic dream sparked while watching Salt Lake City 2002; until then her goal had been to play in the NHL but watching Team Canada’s women win hockey gold changed everything…Outside Interests: Graduated from the University of Wisconsin in 2015 with a Bachelor of Arts in Legal Studies… Enjoys trying out new restaurants and binge-watching Netflix… Loves spending the off-season by the water at home in Nova Scotia fishing for trout… Created the “Hope for Home Helmet Sticker” campaign that raised $20,000 for families affected by the shooting tragedy in Nova Scotia in April 2020… Odds and Ends: Wears No. 6 because her mother’s birthday is June 6… Favourite motto: “You don’t get what you wish for, you get what you work for”… Captained Team Nova Scotia at the 2011 Canada Winter Games…