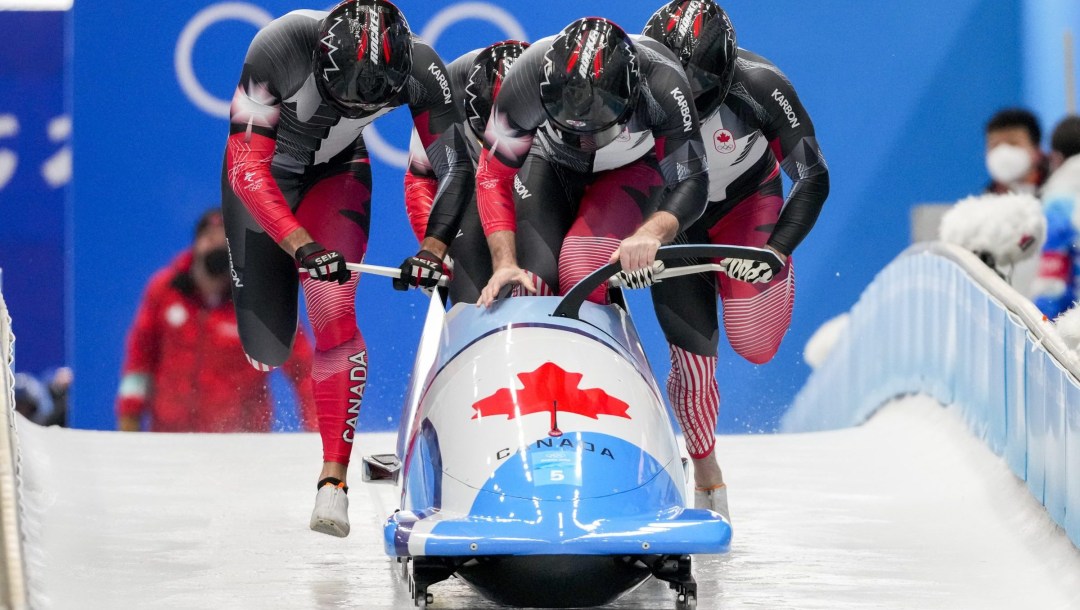 Justin Kripps teamed with brakeman Alex Kopacz to win gold in the two-man event at PyeongChang 2018. They were part of just the second ever tie for an Olympic bobsleigh gold medal, matching the four-run total time of Germans Francesco Friedrich and Thorsten Margis. Since then, Kripps has considered the Germans to be his Olympic brothers, though they remain very competitive. Kripps finished sixth in the four-man event in PyeongChang.

At Beijing 2022, Kripps piloted his four-man crew of Ryan Sommer, Cam Stones and Ben Coakwell to the bronze medal. That made Kripps the first Canadian pilot to ever win Olympic medals in both the two-man and four-man events. He and Stones placed 10th in the two-man event in his fourth Olympic appearance.

Kripps experienced the ups and downs of Olympic competition at Sochi 2014, his first Games as a pilot. Designated as Canada-3, he and brakeman Bryan Barnett were the top Canadian sled in the two-man event with their sixth-place finish and had even been sitting in fourth place after the first three runs. His driving ability on the Sochi track prompted a late reorganization of the crews for the four-man event, with Kripps given the best pushers on the team. Eighth after the first heat, the sled overturned on turn 12 in the second heat. Kripps was medically cleared to continue competing, although two of his crewmen were not, as the sled finished in last place.

After his introduction to bobsleigh in August 2006, Kripps spent three seasons as one of the top brakemen in Canada, leading to him being a member of Pierre Lueders’ four-man crew at Vancouver 2010. Following that experience, Kripps wanted to be in control, so he decided to become a pilot and attended pilot school in the summer of 2010. He spent the 2010-11 season on the developmental North American Cup circuit and competed at the 2011 World Junior Championships, where he drove his four-man sled to a fifth-place finish and his two-man sled to an eighth-place finish.

He started the 2011-12 season on the Europa Cup circuit before making his World Cup debut as a pilot in February 2012 in Whistler. His first world championship appearance as a pilot was in 2012, where he won a bronze medal in the non-Olympic team competition, driving the men’s two-man sled that combined with runs by a women’s bobsled, a women’s skeleton and a men’s skeleton. Kripps’ first World Cup podium as a pilot was also his first victory when he won the two-man event in Königssee, Germany in January 2014.

After another team bronze in 2015, Kripps combined with brakeman Jesse Lumsden to win two-man silver at the 2017 World Championships. It was Canada’s first worlds medal in a men’s bobsleigh event since Lumsden won silver with pilot Lyndon Rush in 2012.

It wasn’t just the Olympic gold medal that made 2017-18 a breakout season for Kripps. He won the overall World Cup title in the two-man event after reaching the podium in five of eight races and never finishing lower than fourth. He also had two podium finishes in the four-man event to be the top pilot in the combined rankings.

Heading into the 2018-19 season, Kripps decided to focus a little more on the four-man event in the hopes of being as successful in it as he was in two-man. In February 2019, he earned his first four-man World Cup victory in Lake Placid. He didn’t lose momentum in two-man, though, reaching the podium in four of his five World Cup races. At the 2019 World Championships in Whistler, he won silver in two-man with Stones and bronze in the four-man with Stones, Coakwell and Sommer.

Kripps finished the 2019-20 season ranked third overall in both the two-man and four-man World Cup standings. He won five medals in the two-man, but the work he had put into improving his four-man driving really paid off. He won three gold medals, including one at the legendary Olympic Bobrun in St. Moritz, considered the most prestigious race on the calendar.

Because of the COVID-19 pandemic, the Canadian bobsleigh team only competed in the second half of the 2020-21 season. Kripps won one two-man medal in three races and three medals in four four-man races. He finished fifth in four-man at the 2021 World Championships.

Back to a full schedule in 2021-22, Kripps finished the World Cup season ranked second overall in both the two-man and four-man standings. That included four podiums in two-man and three podiums in four-man.

A Little More About Justin

Getting into the Sport: Got started in bobsleigh at age 19, drawn by it being a mix of track and field and race car driving, athletic power and fine precision…  Participated in a testing camp in August 2006… Had been a varsity track and field athlete at Simon Fraser University… Outside Interests: Enjoys playing golf and competitive games with his teammates to keep his mind sharp in the off-season… Attended Simon Fraser University… Odds and Ends: Had his Olympic dream sparked while watching Donovan Bailey win 100m gold at Atlanta 1996… Nickname: Beastmode…