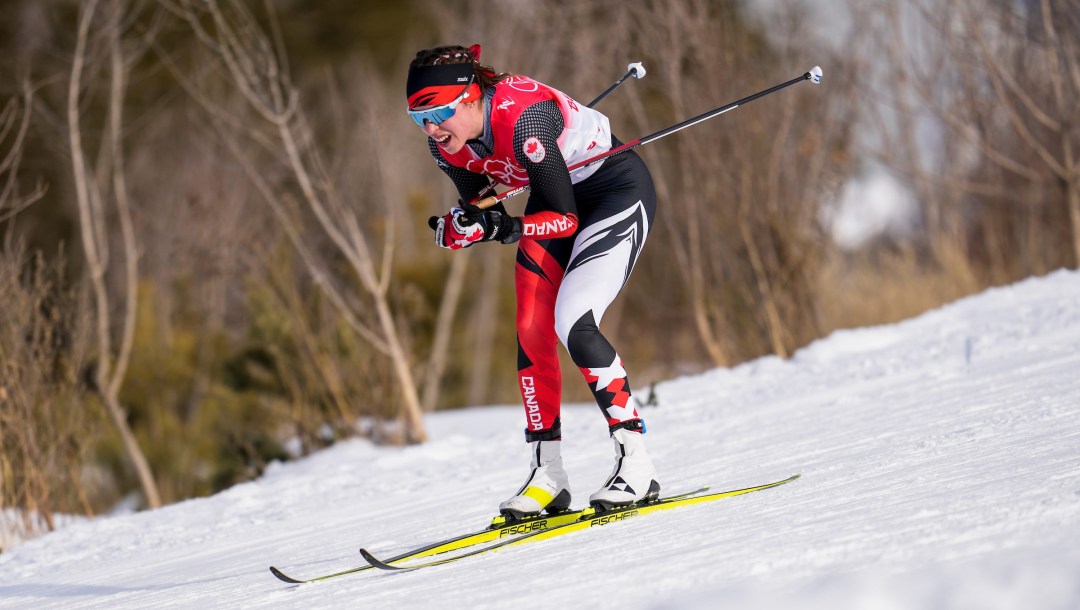 Katherine Stewart-Jones made her Olympic debut at Beijing 2022 where she competed in five events. She broke into the top 30 in the skiathlon and 30km mass start and helped the 4x5km relay team to a ninth place finish.

She got her first taste of major international competition at the 2013 Junior Worlds, which was followed by appearances in 2014 and 2015. It was also in 2015 that she competed at the Canada Winter Games where she won three silver medals in individual events as well as a gold with Team Quebec in the women’s relay.

Stewart-Jones started competing on the Nor-Am Cup circuit in 2013. She finished second overall in 2016-17 before winning back-to-back overall tour titles in 2018-19 and 2019-20. Her first tour victory came at the start of the 2018-19 season and started a streak of 17 straight top-four finishes, which included five more victories.

Stewart-Jones got her first World Cup experience in 2016 when she competed in the Ski Tour Canada. After several near misses over the years, she earned her first World Cup points in February 2020 when she finished 29th in a 15km classic pursuit race in Trondheim, Norway. She would go on to record a 24th-place finish in the skiathlon in Lahti, Finland in January 2021 before achieving a career-best 17th-place finish in the 10km classic mass start in Falun, Sweden a week later. With one more top-30 result before the end of the 2020-21 season, Stewart-Jones finished the year as the top-ranked Canadian woman in the overall World Cup standings.

In 2017, Stewart-Jones competed at both the U23 Worlds and the senior Worlds. After another U23 Worlds appearance in 2018, she had a couple of notable results at the senior worlds in 2019 and 2021 where she was the top Canadian in the women’s 30km mass start both years.

A Little More About Katherine

Getting into the Sport: Started skiing as soon as she could walk… Competed at her first national championships when she was 15… Was always a competitive kid and believes she became a gritty athlete because she always had to keep up with her older siblings… Outside Interests: Event coordinator and athlete ambassador for Fast and Female… Classroom Champions mentor… Enjoys making pizza, camping, cliff jumping, surfing, hiking… Odds and Ends: Twin sister Emilie and older brother Patrick were both cross-country skiers; Emilie competed at the world junior championships; Patrick competed at the world juniors, world U23s and on the World Cup circuit… Older brother Andrew was a competitive rower who won silver in the coxed pair at the 2016 World Championships… Favourite motto: “Train smart, race fast!”…