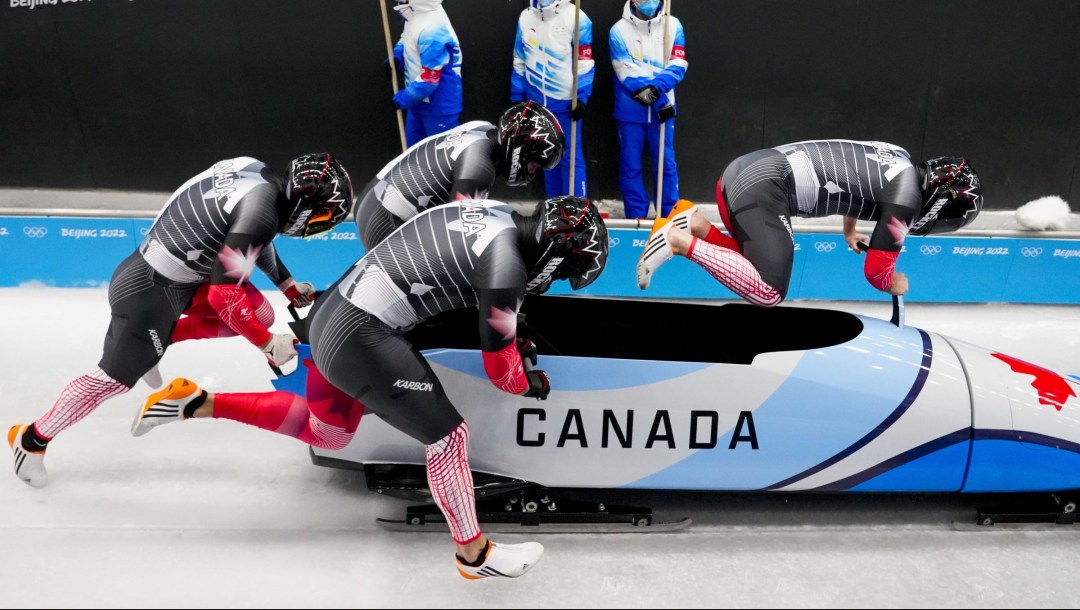 In his third Olympic appearance, Ben Coakwell won a bronze medal in the four-man event at Beijing 2022 as a crewman for pilot Justin Kripps along with Ryan Sommer and Cam Stones.

Coakwell had always dreamed of being an Olympian. As a child, he watched the hockey, bobsleigh, and speed skating events and pretended he was competing against the athletes on television. The dream came closer to reality after he was introduced to bobsleigh. Having seen former CFL running back Jesse Lumsden make the successful conversion from football to bobsleigh in 2009-10, his interest in the ice track was piqued.

A running back himself at the University of Saskatchewan, he had the choice to either pursue a professional football career or try bobsleigh. His speed and size caught the attention of Bobsleigh Canada, so he attended a blue-chip prospect camp in March 2012 and never looked back. Coakwell made his World Cup debut in November 2012 with pilot Christopher Spring. In just his third four-man World Cup event, Coakwell helped push Spring’s sled to bronze.

Coakwell made his Olympic debut at Sochi 2014 as a member of the four-man sled piloted by Kripps. He had originally been scheduled to compete with Spring, but there was a late reorganization of the crews to put the team’s top pushers into a sled with Kripps, who had proven to be the best Canadian driver on the Sochi track. Sitting eighth after the first heat, the sled overturned on turn 12 in the second heat. Coakwell was not medically cleared to finish the competition due to a stiff neck and shoulder injury.

Coakwell competed at his first IBSF World Championships in 2015. He got back on a World Cup podium in January 2016, winning four-man silver in Lake Placid with Kripps. A week later, he won four-man bronze with Kripps in Park City.

At the start of the 2017-18 season, Coakwell was part of Kripps’ silver-winning four-man crew in Park City. In his second Olympic appearance at PyeongChang 2018, Coakwell slid to a 12th-place finish as a member of the four-man crew with pilot Nick Poloniato.

Starting with the 2018-19 season, Coakwell formed a formidable four-man crew with Sommer and Stones behind Kripps. They pushed Kripps to his first career World Cup four-man victory in Lake Placid in January 2019. They went on to win the bronze medal at the 2019 World Championships in Whistler.

To kick off the 2019-20 season, Coakwell won his first two-man World Cup medal with Kripps, finishing third in Lake Placid. The next weekend, the four-man crew won two gold medals in Lake Placid. Towards the end of the season, they won another gold medal, this time at the legendary Olympia Bobrun in St. Moritz. They finished third in the overall World Cup four-man standings. Coakwell also won another two-man bronze with Kripps in Sigulda.

Because of the COVID-19 pandemic, the Canadian bobsleigh team only competed in the second half of the 2020-21 season. The crew of Kripps, Coakwell, Sommer and Stones reached the podium in three of their four four-man World Cup races. They finished fifth at the 2021 World Championships.

The four-man combination continued to be successful in 2021-22, winning three World Cup medals and never finishing lower than sixth as they ended the season ranked second in the overall four-man standings.

A Little More About Ben

Getting into the Sport: Grew up surrounded by organized sport and spent most of his youth playing hockey and lacrosse competitively… Began playing football in grade 12… When Coakwell moved to Calgary in September 2012 to begin full-time training, he moved in with Jesse Lumsden… Outside Interests: Enjoys painting abstract and watching movies… Finds it calming to put on some music and paint… The night before a race he will watch one of his favourite movies… Odds and Ends: Played football for the University of Saskatchewan Huskies on an athletic bursary… As a running back, led the team in scoring and rushing in 2010 and 2011… Also represented the Huskies in track and field as a sprinter… Graduated in 2012… Nickname: 10 Speed, because when he was younger he didn’t have a bike but could run fast and keep up with his friends… Favourite Olympic memory is Simon Whitfield’s triathlon gold medal at Sydney 2000… Favourite quote: “He sendeth rain on the just and unjust alike.” – Matthew 5:45