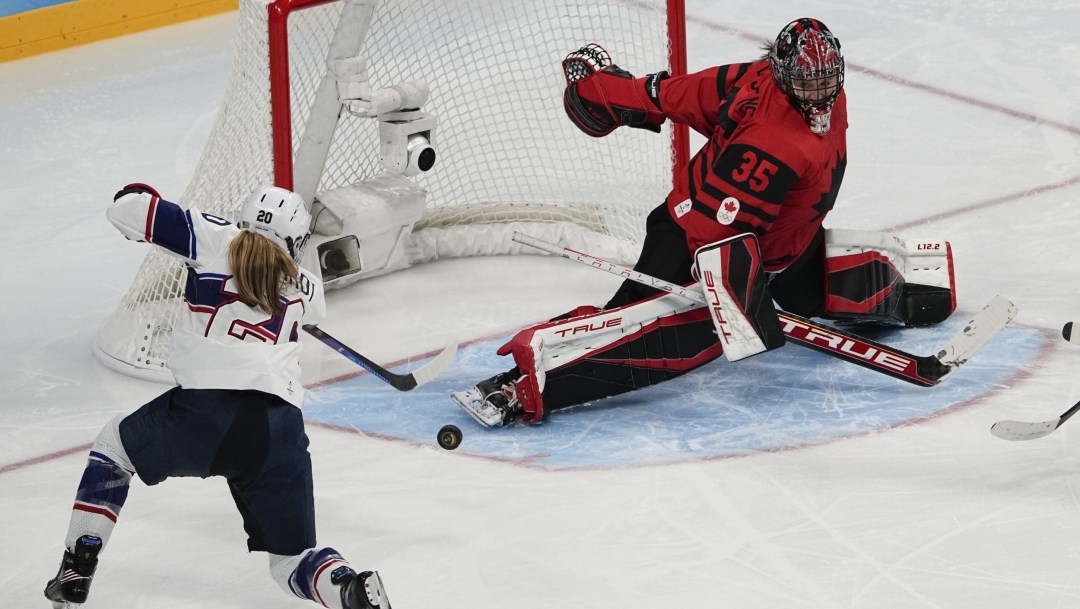 Ann-Renée Desbiens was Team Canada’s primary goaltender en route to gold at Beijing 2022, starting five of seven games. That included the gold medal game in which she stopped 38 of 40 shots as Canada defeated the United States. In Canada’s preliminary round game against the Americans, Desbiens made 51 saves, the most ever by a Canadian goaltender — male or female — in an Olympic match. Desbiens allowed just nine goals on 150 shots in the entire tournament for a .940 save percentage and 1.80 goals against average.

Four years earlier, Desbiens started Canada’s opening game at PyeongChang 2018, earning an 18-save shutout against the Olympic Athletes from Russia en route to the silver medal.

Desbiens made her IIHF Women’s World Championship debut in 2015, helping Canada win silver. She appeared in three games, recording a pair of shutouts, before lost to Team USA in the final. In October 2016 she sustained a concussion for her first serious hockey injury. She missed a month of competition before suiting up for the national team during the 2016 December Series against the United States. She suffered a knee injury during one of those games and it was a few months before it was stable again, thanks to a lot of physiotherapy, rehab exercises, and soft tissue work.

Desbiens finally returned to Canada’s world championship roster in 2021, six years after her last worlds appearance. She started five games, including the gold medal game which Canada won 3-2 in overtime against the United States.

Desbiens had previously worn the maple leaf as a member of the team that won silver at the 2011 IIHF World Women’s U18 Championship. She also competed with the U22 team for series against the United States in 2012 and 2014 before leading the national development team to a gold medal at the 2015 Nations Cup.

Desbiens played four seasons at the University of Wisconsin before being selected by the Boston Pride in the first round of the 2016 NWHL draft. She posted remarkable numbers during her four-year collegiate career, highlighted by a 0.89 GAA and .955 save percentage with 99 wins, and an astounding 56 shutouts, an NCAA record for men and women. In 2015-16 she had broken the NCAA single-season shutout record with 21 and was a top-three finalist for the Patty Kazmaier Award. In her senior season in 2016-17, she ranked first nationally in shutouts (17), wins (29), GAA (0.71) and save percentage (.963) to win the Patty Kazmaier Award as the top player in women’s NCAA hockey. Desbiens was a First Team All-American in 2016 and 2017. She reached the NCAA Frozen Four in all four years with the Badgers.

Before attending university, Desbiens made one start as a teenager in the 2012 CWHL playoffs for Montreal, who would go on to lift the Clarkson Cup. She took the 2018-19 season off, during which the CWHL ceased operations. When she resumed playing, she joined the Professional Women’s Hockey Players Association and won the 2021 Secret Cup, part of the Dream Gap Tour, with Montreal. Desbiens was in net for the Canada All-Stars during the women’s showcase at the 2020 NHL All-Star Game, defeating the United States All-Stars 2-1.

A Little More About Ann-Renée

Getting into the Sport: Started skating at age 3 and playing organized hockey at age 5… Her four older siblings all played hockey but she stuck with it because being at the rink was the highlight of her day… Outside Interests: Majored in business at the University of Wisconsin… Has a Masters in Accounting… Would like to be an accountant for a professional sports team… Enjoys reading books, cooking, and outdoor activities such as hiking, canoeing, and fishing… Odds and Ends: Role model growing up was Patrick Roy because of his style and being unafraid to try something new… Favourite quote: “It’s a great day for hockey!” – Bob Johnson… Won a bronze medal with Quebec at the 2011 Canada Winter Games…