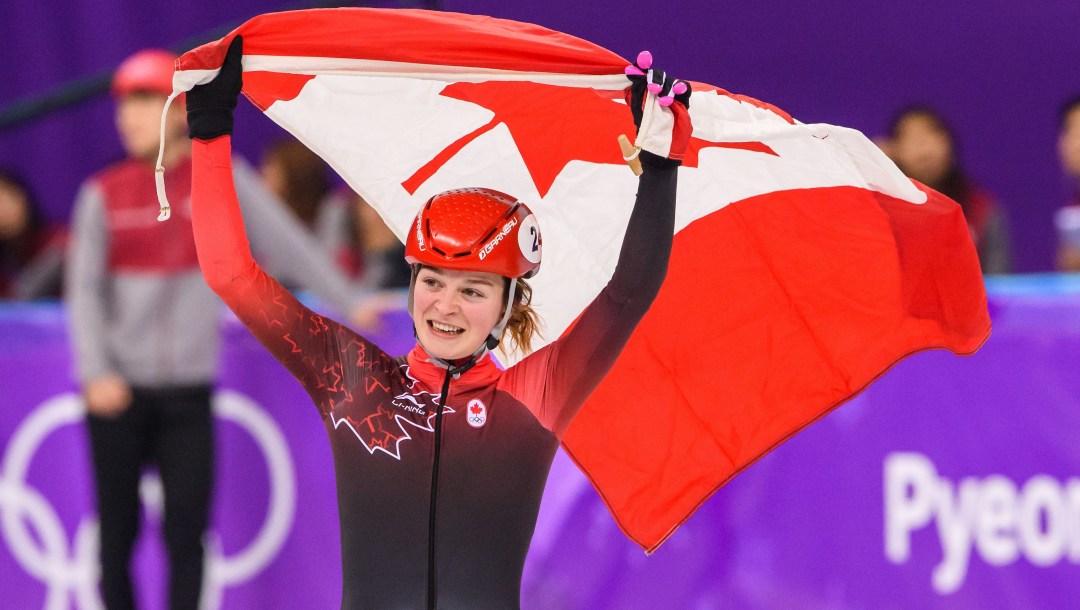 In her Olympic debut, Kim Boutin was Canada’s only triple medallist of PyeongChang 2018, leading to her selection as the country’s Closing Ceremony flag bearer. She first captured the bronze medal in the 500m, followed four days later by the bronze medal in the 1500m. On the final day of short track speed skating competition, she claimed the silver medal in the 1000m. Boutin was just the fourth Canadian athlete and second Canadian woman to win at least three medals at a single Olympic Winter Games. She was also just the second woman in the world to win a medal in all three individual short track speed skating events at one Winter Games.

In her second Olympic appearance at Beijing 2022, Boutin won another bronze in the 500m. That made her just the second Canadian woman to win four career Olympic medals in short track speed skating. She followed up with her career-best performance at the ISU World Championships as she won the overall silver medal after winning silver medals in the 500m, 1000m, and 1500m as well as in the 3000m relay.

Boutin first represented Canada internationally at the 2013 World Junior Championships where she was a member of the 3000m relay team that finished fifth. A year later she won silver with the relay team. At the 2014 event, she also briefly claimed ownership of the 500m junior world record.

Boutin made her World Cup debut the following season and won a bronze medal with the 3000m relay at her first World Cup competition. Her first individual medals came later in the 2014-15 season as she won bronze in the 1000m and 1500m at the sixth World Cup stop in Erzurum, Turkey. At her first world championships in 2015, she finished seventh in the overall classification, making her the top-ranked Canadian woman. She was named Speed Skating Canada’s Rising Star of the Year in short track for 2015.

After starting the 2015-16 season strongly, winning three medals with the 3000m relay as well as a 1500m silver, Boutin decided to take a break after just four World Cup stops. She was physically fatigued and was dealing with a minor back injury, but mostly she needed some time to sort out her mental game. She has since found herself better able to distance her personal life from her skating life. Following her six-month hiatus, she returned to the World Cup circuit fulltime in 2016-17 and earned her first individual World Cup victory, taking 1500m gold at the fifth stop in Dresden, Germany. She also qualified for the 2017 World Championships, proving to herself how much she was capable of accomplishing. At the Canadian selection trials for PyeongChang 2018, Boutin finished first in the overall standings after winning eight of the nine races. She went on to win the overall World Cup title in the 1000m for 2017-18 while finishing third in the 1500m ranking.

Boutin was enjoying an extremely successful 2019-20 season before it was cut short because of the COVID-19 pandemic. In November 2019 she set the 500m world record at 41.936 seconds, becoming the first woman to go under 42 seconds, as she won the first of her five gold medals in the distance. She only missed the podium once all season in an individual event. For her efforts, Boutin was Speed Skating Canada’s Female Short Track Athlete of the Year for the second time in her career, having first earned it in 2018.

Boutin opted not to compete at the 2021 World Championships, the only international competition of the season, choosing instead to focus on her mental and physical well-being for the Olympic season. When she returned to the World Cup circuit in the fall of 2021, she finished second in the overall 500m standings.

A little more about Kim

Getting into the Sport: Started skating at age 6 because her brother was already involved and she wanted to follow him… Loves that there is always something to work on in short track because she must be intelligent and strong, both physically and mentally… Outside Interests: Enjoys painting and knitting as well as attending CEGEP to maintain a balance between her personal life and sport…