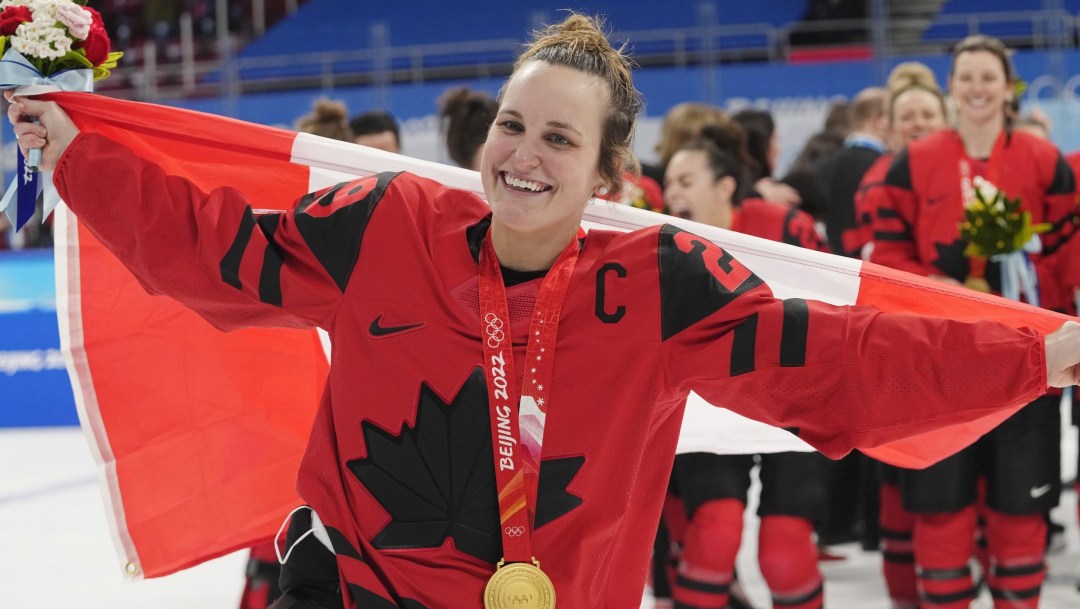 While winning three gold medals in her four Olympic appearances, Marie-Philip Poulin has cemented her status as a big game performer and one of the best hockey players in the world.

At Beijing 2022, Poulin was given the honour of being Team Canada’s Opening Ceremony flag bearer, alongside short track speed skater Charles Hamelin. She went on to become the first hockey player — male or female — to score in four Olympic gold medal games. “Captain Clutch” notched two goals, including the eventual game-winner, in the final against the United States. She finished the tournament with six goals and 11 assists for 17 points, second only to teammate Sarah Nurse for the scoring lead.

At Sochi 2014 she was Canada’s leading scorer with three goals and two assists. Two of those goals came in the thrilling final against the United States when she scored the equalizer with just 55 seconds to play in the third period and added the overtime winner to give Canada its fourth straight Olympic gold medal in women’s ice hockey. She did that while less than fully healthy after suffering a high ankle sprain and missing three months while the team was centralized ahead of the Games.

Four years earlier, at age 18, she had been the youngest member of the team that won gold at Vancouver 2010. There she scored five goals and two assists, earning her a spot on the media all-star team. Again, two of those goals came in the gold medal game against the United States in which she was the lone goal scorer in a 2-0 victory.

At PyeongChang 2018, Poulin was second on the team with six points, scoring a clutch goal yet again in the final, en route to the silver medal after a 3-2 shootout loss.

Poulin has been part of the national team program since 2007. She won silver at the inaugural IIHF U-18 Women’s World Championships in 2008, while leading the tournament in points and being named Bbest Fforward. She won another U-18 silver in 2009 and also made her debut at the senior IIHF Women’s World Championship, picking up another silver. She now has six silver medals and a bronze to go with the pair of golds won in 2012 and 2021.

Poulin was the leading scorer at the 2013 World Championship, with six goals and six assists, and was named tournament MVP, top forward and a media all-star. She began serving as team captain at the world championships in 2015 and was again the team’s top scorer at the 2017 Worlds with two goals and four assists.

She missed most of the 2019 Worlds due to a knee injury and had to watch from the sideline as Canada was upset by Finland in the semifinal. After the worlds were cancelled in 2020, she returned healthy for 2021 and came through when needed most, scoring the gold medal-winning goal in overtime against the United States to give Canada it’s first world title in almost a decade.

Poulin began her collegiate career at Boston University in 2010-11, helping the Terriers reach the championship game of the NCAA Frozen Four while being nominated for the Patty Kazmaier Award as the top female player in NCAA hockey. In 2012-13 she served as team co-captain as the Terriers returned to the Frozen Four championship game. After redshirting in 2013-14 due to Olympic centralization, Poulin was named Terriers’ captain as a senior in 2014-15. She set the Hockey East Tournament record in points (12) and won the conference title for the fourth consecutive time. She was selected a First Team All-American and became the first Terrier to be a top-three finalist for the Patty Kazmaier Award.

Before university, Poulin played for the Montreal Stars of the CWHL as a teenager. She helped the team win the Clarkson Cup in 2008-09, one season after she was league Rookie of the Year. After graduation she returned to the CWHL for 2015-16, playing for Les Canadiennes de Montréal. In all three seasons Poulin played for Montreal (2015-16, 2016-17, 2018-19), Poulin won the CWHL MVP, the Jayna Hefford Trophy as league MVP as voted by the players, and the Angela James Bowl for most points scored in the league. She won a second Clarkson Cup in 2017.

A little more about Marie-Philip

Getting into the Sport: Started playing hockey at age five and began playing competitively at age 12… Had started figure skating when she was four but didn’t like it; wanted to be like her brother so her parents let her try hockey… Credits her brother with always pushing her, believing in her and teaching her about work ethic and discipline; he also knocked out one of her teeth while they played 1-on-1 in their basement… Played with girls for the first time at age 16 when she moved to Montreal to learn English… Had her Olympic dream sparked while watching the Canada-USA women’s gold medal game at Salt Lake City 2002; as an 11-year-old couldn’t understand why players were crying during the happy moment of receiving their medals; eight years later when she cried while receiving her own Olympic gold medal it all made sense… Outside Interests: Enjoys playing golf, camping and nature… Graduated from Boston University in 2015 with a degree in Psychology… Supports Canadian Tire’s Jumpstart and Bauer’s First Shift programs… Odds and Ends: Ruptured her spleen in 2011, spent three days in ICU and couldn’t play for three months…  Favourite NHL team: Montréal Canadiens… Inspired by Caroline Ouellette’s passion for hockey and the way she works… Favourite motto: Fall seven times, stand up eight…