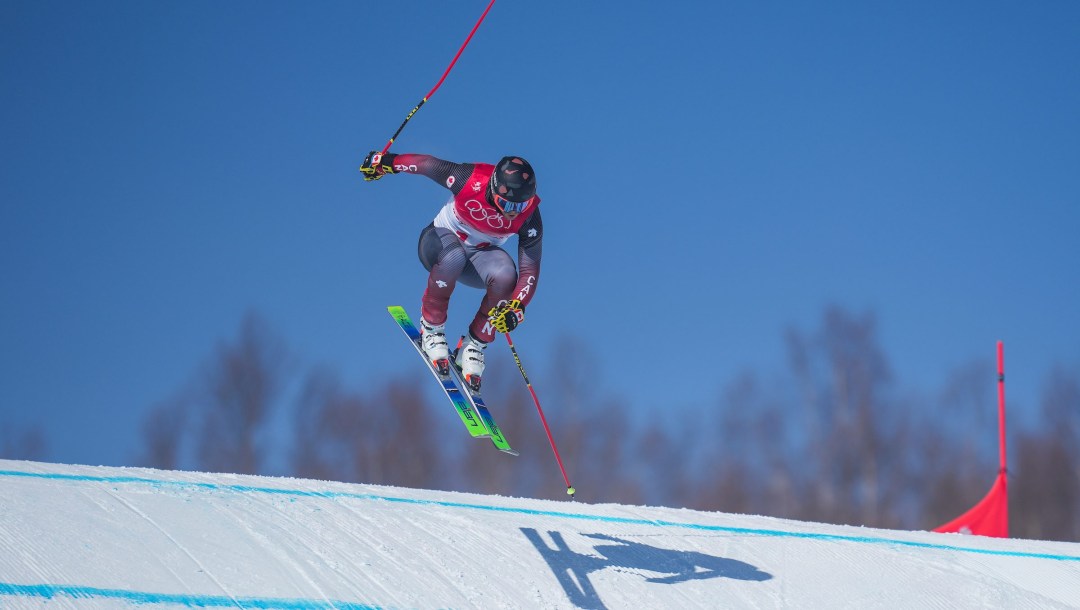 Brady Leman won ski cross gold at PyeongChang 2018, overcoming the struggles and heartbreak he’d experienced during his Olympic journey. Leman had just missed winning an Olympic medal at Sochi 2014 when he finished fourth in the big final. That was four years after his first Olympic experience was amongst the shortest of any athlete at Vancouver 2010.

He had been named as the first alternate to the men’s ski cross team and got the call to compete when Dave Duncan broke his collarbone during a training run, two days before the competition began. But the very next day Leman crashed during his own training run, aggravating a broken tibia that he had suffered in March 2009 for which he had spent the previous summer in rehab. The hairline fracture bent the rod that had been surgically implanted in his right leg.

In December 2010 Leman broke his right leg for a third time, which led to two rods being implanted. That caused him to miss the 2011 Winter X Games in Aspen, where he had been the reigning bronze medallist as part of a Canadian podium sweep in 2010. He also missed the 2011 FIS World Championships.

When he returned to competition, he had almost forgotten what it was like to ski pain-free. During the entire year leading up to Vancouver 2010 it had hurt just to put his boot on. After the third injury he had to think a long time about whether to come back, but he had confidence in where he could be.

The 2011-12 season was the first in which Leman was completely healthy in two years. He recorded his first World Cup podiums, including two victories, helping him to finish second in the World Cup ski cross standings. He had another solid season in 2012-13, recording four top-five finishes including two podiums.

After Sochi 2014, Leman enjoyed some of his greatest success. He won gold at the 2016 X Games and finished second overall in the 2016-17 World Cup standings after posting seven podium finishes, including two wins, his first victories on the circuit in five years.

In the 2018-19 season following his Olympic gold medal, Leman reached the podium in four World Cup events, winning gold on Canadian snow at Blue Mountain. In his fifth appearance at the FIS World Championships, the finally reached the podium, winning the silver medal.

In 2019-20, Leman finished third in the overall World Cup standings after winning two medals and racing in two other big finals. But that May, Leman was injured when he was thrown from his mountain bike in a crash and hit a tree. He sustained five broken ribs, a fractured collarbone and a collapsed and punctured lung.

After spending the summer in rehab, he was back for the 2020-21 World Cup season. Leman took some time to find his form, but in late February, he finally advanced into a big final in Bakuriani, Georgia. Unfortunately, he crashed on the second last jump and sustained a knee injury which ended his season. The good news was that he didn’t need surgery.

Fully recovered for the start of the 2021-22 season, Leman won silver at the World Cup opener in Secret Garden, China, at the Olympic venue for Beijing 2022. It was his 29th career World Cup podium. After some up and down results, he got back into a big final at the last World Cup before the Olympic break in Nakiska. At Beijing 2022, Leman advanced to the small final in which he finished second to place sixth overall.

A Little More About Brady

Getting into the Sport: Learned to ski at 18 months… Became an alpine racer but after a tough year decided to give ski cross a try in 2008 and loved it immediately… Turned down funding and carding from Alpine Canada to pursue ski cross at his own expense, which would cost about $20,000 for the first season… Also turned down scholarship offers from American universities… Outside Interests: Favourite hobbies are golf, mountain biking, hiking, fishing and motocross… For every TV show he watches while on the road he also tries to read a book… Supports the Abby Award, which celebrates young ski racers who live the values of having fun, being a good teammate, and giving full effort (named for a young ski racer who died in a skiing accident)… Helmets for Heroes ambassador for the Creative Impact Foundation… Odds and Ends: Nickname: Wombat because his teammates thought he looked like a dead wombat they saw on the road during the ski cross team’s first training camp in Australia… Looked up to alpine skier Thomas Grandi… Spent a lot of time at Canada Olympic Park when he was a kid because his mom worked there and would always get goosebumps while watching a Calgary 1988 highlight video on repeat…