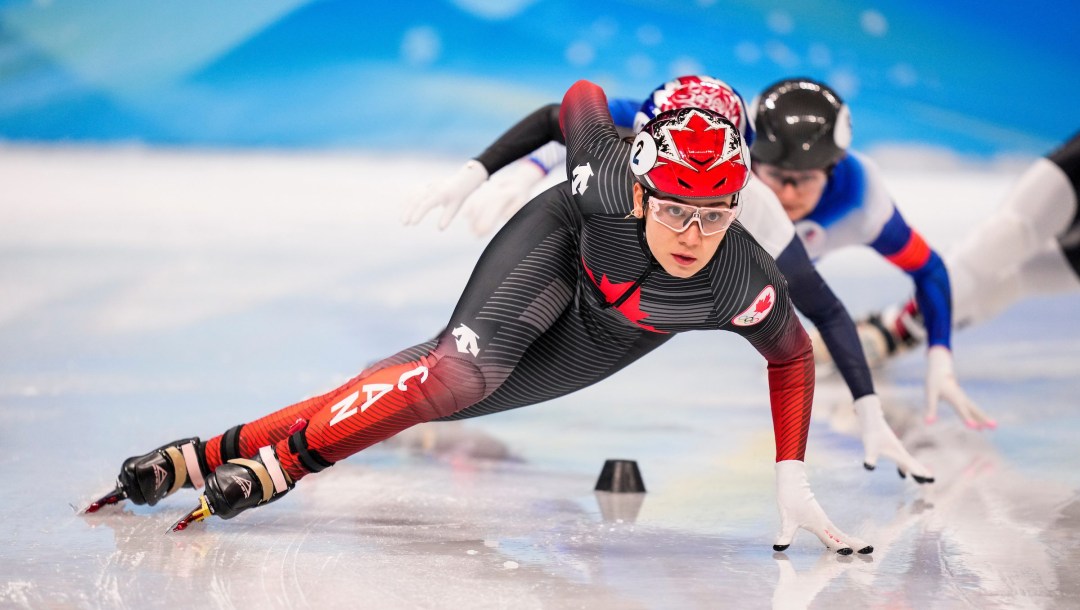 Courtney Sarault made her World Cup debut during the 2018-19 season and won a silver medal in the 1500m at the season-opener in Calgary. She would make her world championship debut at the end of the season, winning bronze with the 3000m relay team and competing in three individual events.

It was also in 2019 that Sarault overtrained and ended up having to stop all physical activity for months. Though the comeback was difficult both physically and mentally, she recovered to compete on the World Cup circuit for the 2019-20 season. During the second stop on home ice in Montreal, she won 1000m silver for her first individual World Cup medal since her debut a year earlier. She ended up winning three more individual medals that season along with five medals with the 3000m relay, including a gold in Shanghai. At the inaugural Four Continents Championships in 2020, Sarault won 500m bronze and 1000m silver to finish third overall.

Because of the COVID-19 pandemic, there was only one international short track event for Canadians in what would have been the 2020-21 season. But Sarault made the most of the opportunity to compete at the 2021 World Championships where she won 1500m silver and 1000m bronze and finished second in the overall standings.

Sarault had a great start to the 2021-22 season, finishing the World Cup circuit ranked third overall in the 1500m with three medals won in the distance. In her Olympic debut at Beijing 2022, she finished fourth with the 3000m relay and competed individually in the 1000m and 1500m. At the 2022 World Championships in Montreal, she helped the 3000m relay team win the silver medal and had a near-podium in the 1500m, placing fourth.

Sarault had her breakout moment at the 2018 World Junior Championships where she finished second overall after winning silver medals in the 1000m and 1500m, placing fourth in the 500m, and capturing gold with the 3000m relay team.

Getting into the Sport: Started speed skating at age 7… As a young racer was known as “pink suit girl” because of the hot pink suit she made her parents get made for her to skate in… Began believing she could compete at the Olympics after winning medals at the 2018 World Junior Championships… Outside Interests: Enjoys cooking and baking… Tries to play other sports such as rugby in the offseason… Odds and Ends: Father Yves Sarault played in the NHL… Credits older brother Chris with making her a really competitive person and pushing her from a young age… Always wears the same earrings and the same pink scrunchie when she races…