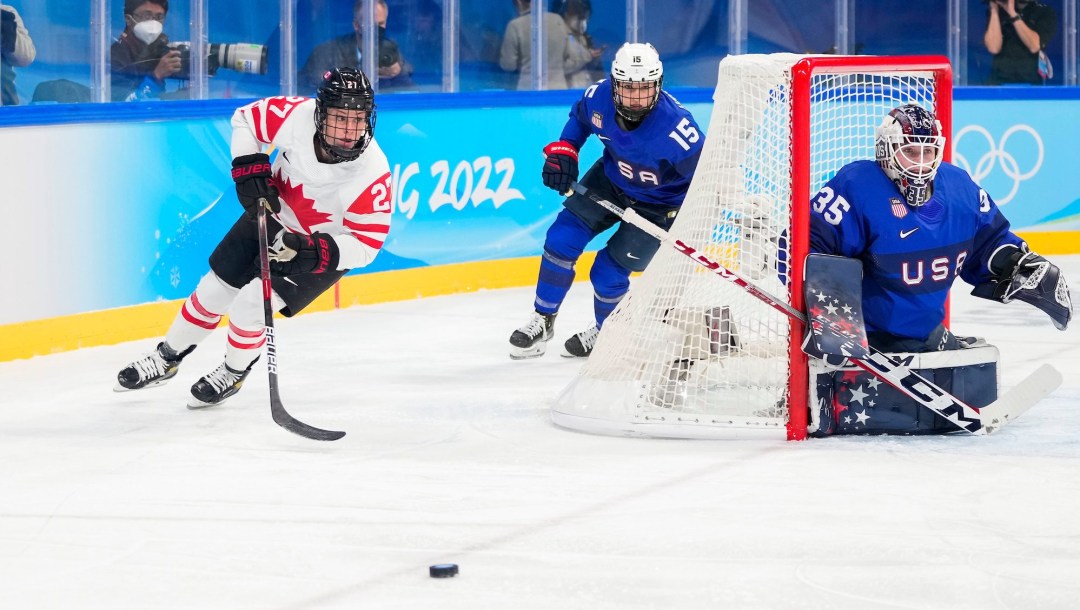 Emma Maltais made her Olympic debut at Beijing 2022 where she helped Canada win the gold medal. She recorded one goal and one assist in the tournament.

Maltais first joined the Canadian national program in 2015 with the U18 team. Just two months before the 2016 IIHF U18 Women’s World Championship, Maltais broke her wrist in training but recovered in time to compete for Canada. She finished tied for the team lead with six points in five games, helping Canada win a silver medal – a result they would repeat in 2017.

In 2018, Maltais skated with the U22 national development team and competed in the Nations Cup. In 2019 she debuted with the National Women’s Team in a series against the United States. She made her debut at the IIHF Women’s World Championship in 2021, playing in five games as Canada won its first world title in almost a decade.

Maltais played collegiately for the Ohio State University, reaching the NCAA Frozen Four in 2018 and 2021. She also helped the Buckeyes in their first ever WCHA Championship in 2020. Maltais was a two-time Patty Kazmaier Award finalist (2020, 2021) and the 2018 WCHA Rookie of the Year. As a junior in 2020 she set a school record with 59 points and was a Second Team All-American selection. In 2021 she served as team captain and was named an All-American Scholar. She finished her career with three All-WCHA First Team selections, to go along with one Second Team pick, as well as three WCHA All-Academic Team honours.

Getting into the Sport: Started skating before the age of two on a small ice pad her dad made in the backyard… Always wanted to do what her brother was doing, which included convincing her parents to let her start agility training at age 9… Has wanted to compete for Canada since watching the women’s team win gold at Sochi 2014 in her school auditorium… Outside Interests: Graduated from Ohio State University with a Health Sciences degree… Would like to become a physical therapist… Enjoys cooking, scrapbooking, and journaling… Odds and Ends: Favourite motto: “Everything happens for a reason”… All-time leading scorer in Oakville Hornets history with 150 points in 105 games… Other than her parents, calls Oakville coach Bradi Cochrane her biggest inspiration… Always has the same coffee and pregame meal before she gets to the rink…