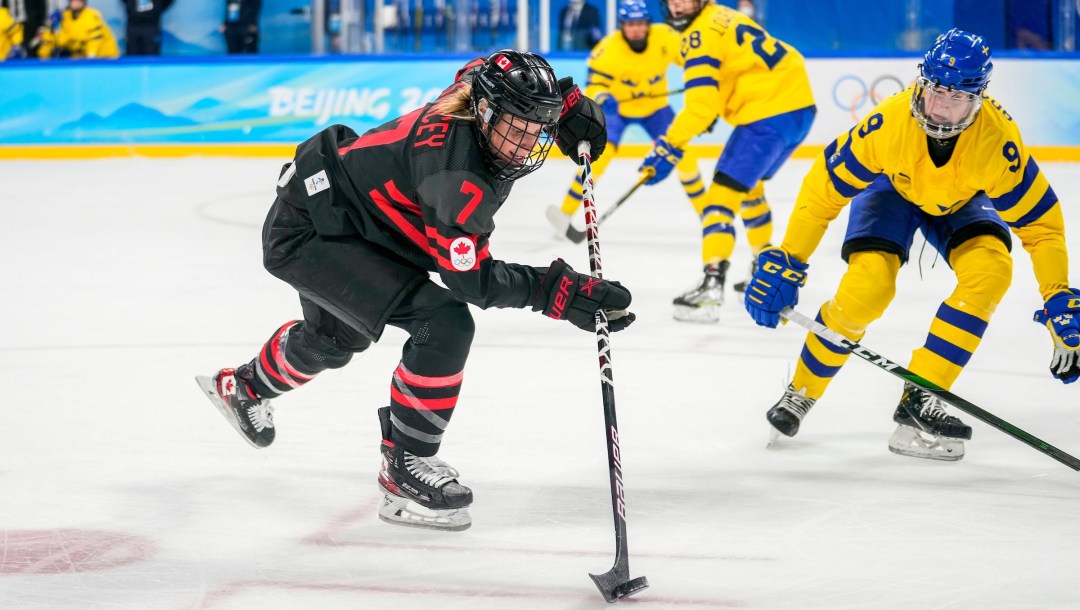 In 2019 Stacey scored her first career goal at the IIHF Women’s World Championship in Canada’s quarterfinal win over Germany as the team went on to win bronze. Stacey was named to the roster for the 2020 World Championship that was cancelled but returned to help Canada win gold in 2021, the team’s first world title in almost a decade.

Stacey first wore the maple leaf as a member of Canada’s National Women’s U18 Team in August 2010. She went on to win silver and gold with the team at the 2011 and 2012 IIHF U18 Women’s World Championships, tying for the team lead in scoring at the latter. Over the next few years, Stacey competed internationally with the National Women’s Development Team, which included gold medals at the 2015 and 2016 Nations Cup. But she was also cut from the National Women’s Team four straight years before making her IIHF Women’s World Championship debut in 2017, helping Canada win the silver medal. Those cuts made her truly realize how much she wanted to pursue her dream of playing for Team Canada.

Stacey played collegiately at the University of Dartmouth where she was the team’s Rookie of the Year in 2012-13. As a junior in 2014-15, she was the team’s co-leader in scoring and was an All-Ivy League Honorable Mention. She captained Dartmouth in her senior year and was the team’s leading scorer as well as MVP, earning her a spot on the Ivy League First All-Star Team. In her final college game, she broke both wrists after being tripped into the boards but was able to avoid surgery.

Selected third overall by Brampton in the 2016 CWHL Draft, she went on to be named CWHL Rookie of the Year in 2016-17 after leading all first years in scoring. After missing most of the 2017-18 season due to Olympic centralization, Stacey returned for the playoff run to score the overtime-winning goal in the Clarkson Cup final. She was an all-star again in 2019, averaging more than a point per game in what would be the CWHL’s final season. Stacey then joined the PWHPA playing for the Montreal-based team during the Dream Gap Tour.

A little more about Laura

Getting into the Sport: Started playing hockey at age 4… Her parents enrolled her in a learn-to-skate/figure skating class but she didn’t enjoy it because she wanted to be with the kids playing hockey on a different rink… She eventually convinced her parents to let her play… Started to dream about playing for Team Canada since the first time she saw the Canadian women win gold on TV at Salt Lake City 2002; wanted to one day stand on the blue line with a gold medal around her neck…Outside Interests: Graduated from Dartmouth College in 2016… Would like to pursue an MBA and work on the business side of sports… Enjoys playing golf, swimming, and camping… Began a LS7 Sticks for Charity Road Hockey Tournament as a way to get children outside and active… Odds and Ends: Her great-grandfather was Hockey Hall of Famer King Clancy… Her great uncle Terry Clancy played for Canada at Innsbruck 1964… Has been inspired by Cassie Campbell’s style of play, leadership, and dedication since she was a young child… Favourite quote: “One day I want to honestly say ‘I made it’”; has it as her screensaver to make it a daily reminder… Featured on the silver medal-winning Team Ontario at the 2011 Canada Winter Games…