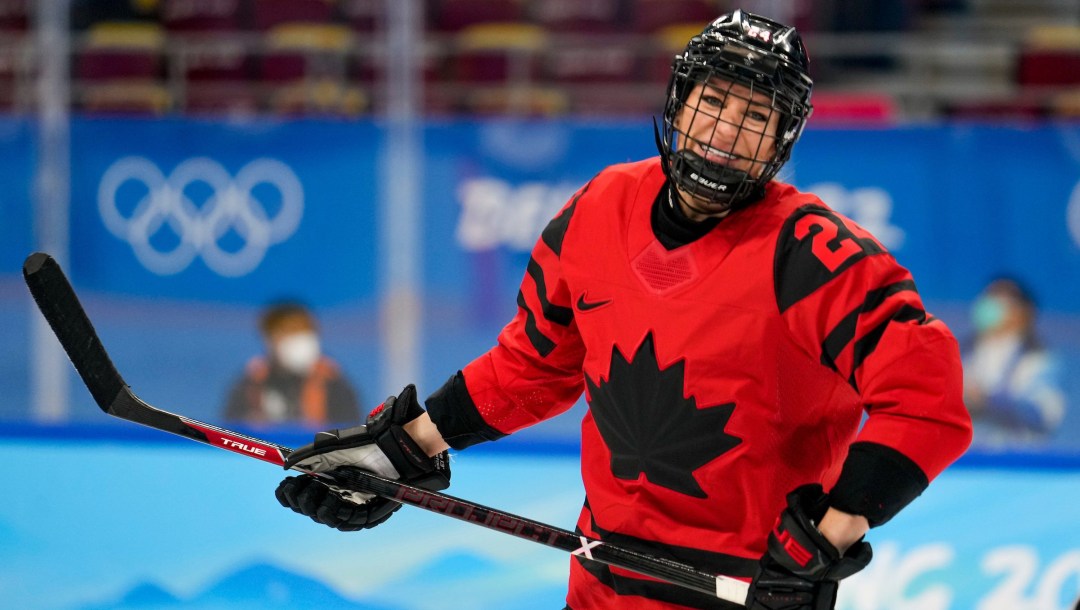 Natalie Spooner competed in her first Olympic Games at Sochi 2014 where she scored the first two goals in Canada’s 3-1 semifinal victory over Switzerland en route to the gold medal. She was also a member of Canada’s silver medal-winning squad at PyeongChang 2018. In her third Olympic appearance at Beijing 2022, Spooner recorded three goals and 11 assists as she helped Canada win another gold medal. That tied her with teammate Brianne Jenner for third in points scored in the tournament behind teammates Sarah Nurse and Marie-Philip Poulin.

In 2008, Spooner was a member of the team that won silver at the inaugural IIHF U-18 Women’s World Championship. She went on to make her debut at the IIHF Women’s World Championship in 2011 as part of another silver medal-winning squad. Spooner then helped capture world championship gold in 2012, tying for the team lead with four goals. She was then part of four consecutive world silver medals from 2013 to 2017, wearing the ‘A’ in 2015 when she led the team in scoring with four goals and three assists.

After a disappointing bronze in 2019 when Spooner again led the team in points with 10, she helped Canada win gold at the delayed 2021 World Championship, their first world title in almost a decade. Over her time with the national team, Spooner has also competed in numerous Four Nations Cup tournaments, bringing home three gold medals.

Spooner began her collegiate career at Ohio State University in 2008-09. As a senior in 2011-12 she set an Ohio State single season record for goals scored, earning her a nomination as a top-10 finalist for the Patty Kazmaier Award as the top female NCAA hockey player. She was also named as an NCAA First Team All-American. She finished her Buckeyes career as the school’s all-time leader in goals (100) and second in points (163).

After graduation, Spooner was drafted by the Toronto Furies of the CWHL. In 2014 she led the Furies in scoring in the playoffs en route to becoming the first player in league history to win Olympic gold and the Clarkson Cup in the same year. In 2015-16 she was a finalist for CWHL MVP and was named team captain the following season. She missed the 2017-18 CWHL season due to Olympic centralization with Team Canada. Spooner returned for 2018-19 and finished with a point per game in the regular season and playoffs. After the collapse of the league, Spooner joined the PWHPA’s Toronto club for the Dream Gap Tours in 2020 and 2021.

A little more about Natalie

Getting into the Sport: Started playing hockey at age four… Wanted to be just like her brothers who all played… Had her Olympic dream sparked after meeting Jennifer Botterill at a hockey camp… Favourite Olympic memory is watching the women’s hockey team win gold at Salt Lake City 2002 while she was at a tournament with her minor hockey team… Outside Interests: Completed her Bachelor of Science in Nutrition (pre-med) at Ohio State University in August 2012…  Enjoys singing and travelling… Odds and Ends: Collects spoons during her travels… Was a runner-up on Season 2 of The Amazing Race Canada with teammate Meaghan Mikkelson… Swapped hockey skates for figure skates and finished second place with Andrew Poje in Season 5 of CBC’s Battle of the Blades before joining the cast as a judge in Season 6… Favourite quote: “Ability is what you’re capable of doing. Motivation determines what you do. Attitude determines how well you do it.” – Lou Holtz…