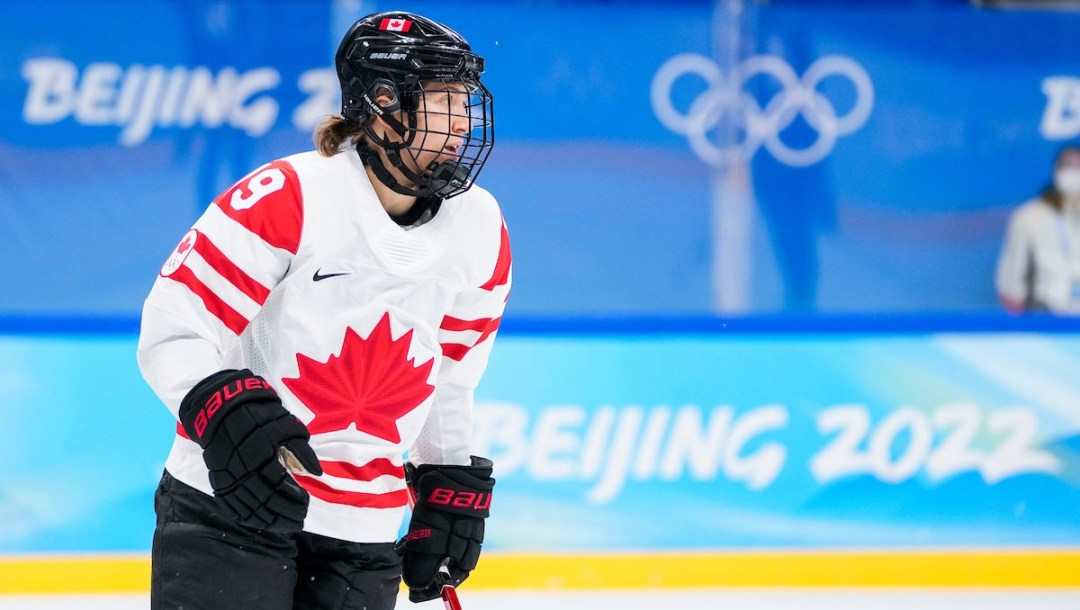 Brianne Jenner was named MVP of the women’s hockey tournament at Beijing 2022 where she won her second Olympic gold medal. Jenner led the tournament with nine goals, tying the record for a single Olympic Games. An assistant captain of Team Canada, she also added five assists for 14 points and was named to the Media All-Star team at forward.

Jenner was centralized with the National Women’s Team in advance of Vancouver 2010 but was not selected to the Olympic team. That changed four years later when she was part of Canada’s gold medal-winning squad at Sochi 2014, scoring Canada’s first goal of the gold medal game. She then helped Canada win silver at PyeongChang 2018, recording two assists.

Jenner first wore the maple leaf internationally as a member of Canada’s national under-18 team. After winning silver at the 2008 IIHF U-18 Women’s World Championship, she captained the Canadian squad to a second straight silver in 2009.

Jenner first joined the senior national team in 2009 for her first of four gold medals at the Four Nations Cup. She made her senior IIHF Women’s World Championship debut in 2012, helping Canada win the gold medal. She went on to win four silver medals at the 2013, 2015, 2016 and 2017 World Championships. She was named assistant captain for the first time in 2015. Jenner had an outstanding personal performance in 2019 when she scored three goals and totalled nine points at the worlds, but Canada left the tournament with a bronze medal for the first time ever. The team bounced back in a big way in 2021 as Canada won the world title for the first time in almost a decade. Jenner, one of just five players left from the gold medal-winning team in 2012, scored the opening goal in the final against the United States and assisted on Marie Philip Poulin’s overtime winner. She finished second in tournament scoring with 11 points to go along with a +13 rating in six games.

Jenner began her collegiate career at Cornell University in 2010-11 and was named Ivy League Rookie of the Year after being second in NCAA freshman scoring. It was also the first of two straight years in which she helped Cornell reach the NCAA Frozen Four. In 2012-13 Jenner earned numerous individual accolades, including Ivy League Player of the Year, First Team All-American, and Cornell MVP after recording 35 goals and 35 assists in 32 games. She returned to Cornell after Sochi 2014 and was named Ivy League Player of the Year and a finalist for the Patty Kazmiaer Award for the second time.

Before attending Cornell, Jenner played two seasons in the CWHL with Mississauga and Burlington in 2009 and 2010, scoring 23 points in 17 games as a teenager during the latter season. After graduation, Jenner joined the Calgary Inferno of the CWHL, scoring twice in the final and winning the Clarkson Cup as captain in 2015-16. She won her second Clarkson Cup in 2019, in what would turn out to be the final season of the CWHL. Following the collapse of the league, Jenner joined the PWHPA and played with the Toronto-based team during the Dream Gap Tours.

A little more about Brianne

Getting into the Sport: Started playing hockey at age 3 on an outdoor pond… Played her first season in a league run by her father and uncle… Has dreamed of being an Olympian since watching the Canadian women win hockey gold at Salt Lake City 2002, sitting inches from her TV… Had three knee surgeries before graduating high school which taught her to be patient and determined… Outside Interests: Majored in Government with a minor in Law and Society at Cornell University… Completed her Master’s in Public Policy at the University of Calgary… Took up boxing as a fun and different way to cross train… Watches a lot of news and political shows… Enjoys hiking and camping in the mountains… Served as assistant coach at Mount Royal University in 2019… Runs the Brianne Jenner Hockey Academy… Odds and Ends: Growing up as a fan of the Montreal Canadiens, her favourite NHL player was Saku Koivu for his playmaking vision… Favourite pre-game music is The Tragically Hip… Favourite motto: Work hard and be humble…  Collects hockey pucks…