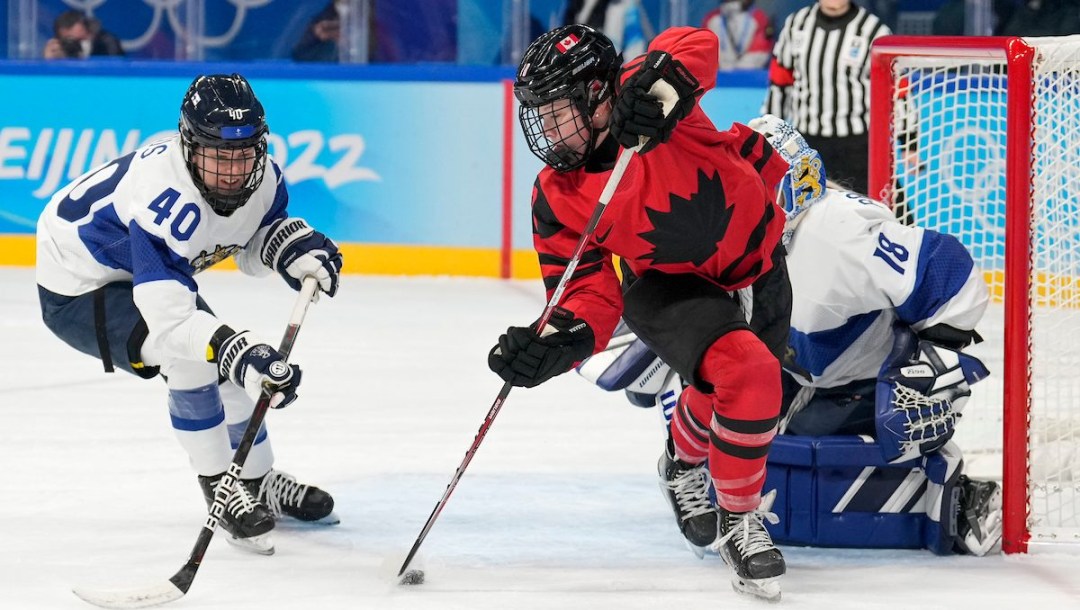 Sarah Fillier made her Olympic debut at Beijing 2022 where she helped Team Canada win the gold medal. Fillier scored eight goals to rank second only to teammate Brianne Jenner in tournament goal scoring. She earned a hat trick in Canada’s 11-0 quarterfinal victory over Sweden.

Fillier holds the rare distinction of having played for the U18, U22, and National Women’s Team all in one calendar year. In 2018 she won a bronze medal at her second IIHF U18 Women’s World Championships and was named one of the top three players on the team by the coaches. She then joined the U22 team in a summer series against the United States before moving up to the senior squad for the Four Nations Cup. She scored her first goal during their 6-1 win over Sweden, becoming the first player born in the 2000s to score for the National Women’s Team, en route to a silver medal.

In 2019, Fillier skated with both the U22 and senior national teams. She was named to the roster for the 202o IIHF Women’s World Championship, but the tournament’s cancellation meant she had to wait until 2021 to make her first senior worlds appearance. There she scored three goals and added three assists, helping Canada to their first world title since 2012.

Fillier first joined the national team program in 2016, skating with the U18 team in a three-game series against the United States. She made her debut at the U18 Worlds the following season at just 16 years old, scoring three goals and winning a silver medal.

Fillier plays collegiately at Princeton University with her twin sister, Kayla. She has been a finalist for the Patty Kazmaier Award for the NCAA’s top female collegiate hockey player, Second team All-American, and ECAC First Team selection in each of her two seasons with the Tigers. As a freshman she won the Ivy League title, led the NCAA in scoring with 57 points, was named USCHO Rookie of the year to go along with both Ivy League Player and Rookie of the Year and ECAC Rookie of the Year honours. She was named captain for her sophomore season in 2019-20 and equaled her 57 points from the year before. She led Princeton to the ECAC title and was named the conference tournament’s Most Outstanding Player.

Getting into the Sport: Started skating when she was two and began playing hockey the next year… Played boys hockey until age 12… Has wanted to represent Canada since watching some of her older teammates compete in the U18 World Championship… Outside Interests: Working towards a degree in Psychology at Princeton University… Would like to pursue a career in sport or social psychology… Enjoys discovering new songs, albums, or music artists… During the off-season likes to travel, cook and watch reality TV… Odds and Ends: Favourite motto: “Never be satisfied”… Inspired by teammate Marie-Philip Poulin for her dominant play with Team Canada but still working to be the best in the world while remaining humble…